Tell Me About: Avian Influenza

Avian Influenza, also known as HPAI, is a highly contagious virus that occurs in a variety of bird species, including wild aquatic birds, raptors, and domestic poultry. The virus became a concern in January of this year when it was detected in chickens in Canada. Since then the virus has spread to birds across the United States, including several counties of Florida. The likelihood of a human contracting avian influenza is considered low and mainly a concern for those who work in close contact with poultry or other birds. 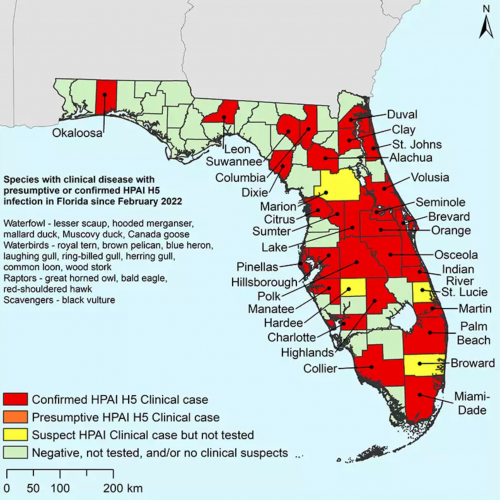 This map shows which counties in Florida have confirmed cases of birds with HPAI. While Florida has so far only recorded wild birds being infected, other states have seen the virus spread to domesticated poultry.

Avian influenza is a serious threat to the health and population stability of wild birds in Florida. The virus also poses a major issue for the agricultural industry, as chickens, turkeys, and ducks can all be infected. A severe outbreak of avian influenza in 2015 affected more than 50 million chickens and turkeys. The federal government spent hundreds of millions of dollars to reduce the outbreak’s impact on market prices of poultry and related goods. Epidemiologists state that the current outbreak’s rapid spread is concerning as it increases the likelihood of the virus mutating.

What you can do.