These first few days have been busy! We arrived Sunday evening after a quick 2 hour flight from Miami. We settled into our place, had a good meal and got up the next morning ready to get to work. We have been brought on board to do a biodiversity survey of the French Marine National Park on St. Martin. So the first morning we met with the staff there to do some general strategizing and introductions. 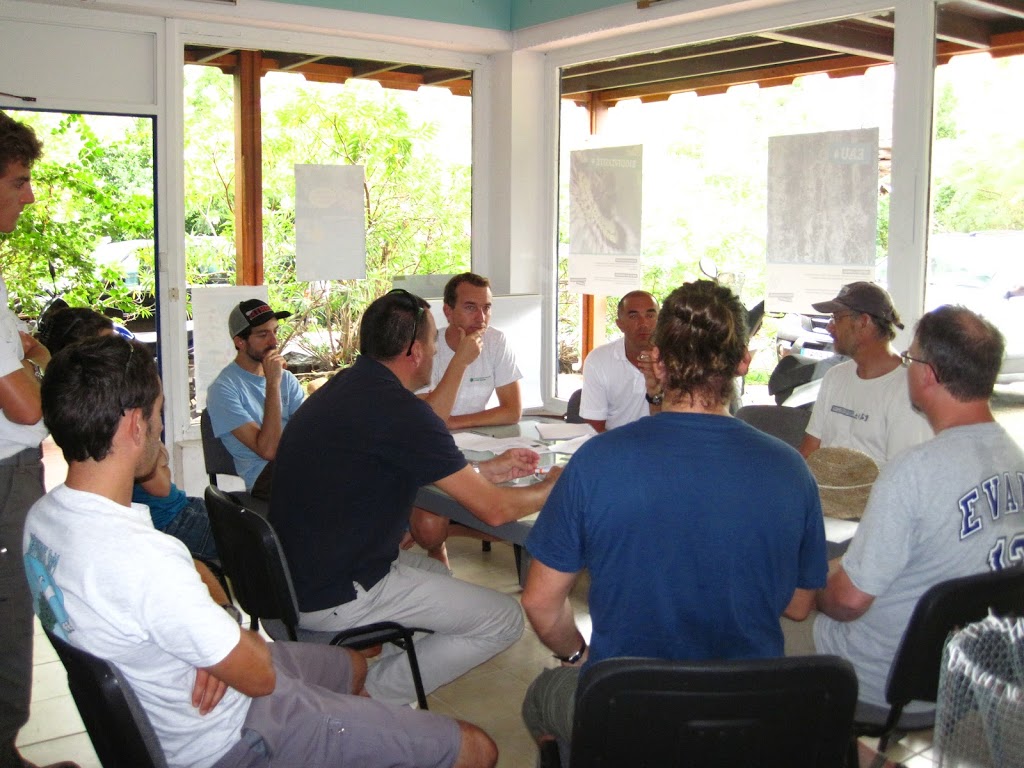 The meeting was conducted largely in French, which everyone speaks but John and I. We did a lot of smiling and nodding. I assume that Gustav and François weren’t making any extravagant promises on my behalf. After the meeting Gustav took them out to gear-mountain, which we had brought with us to the station, to demonstrate some of our collecting techniques. Here is what brushing off an overhang into a net looks like (or maybe it’s a scraper, I can’t be sure). 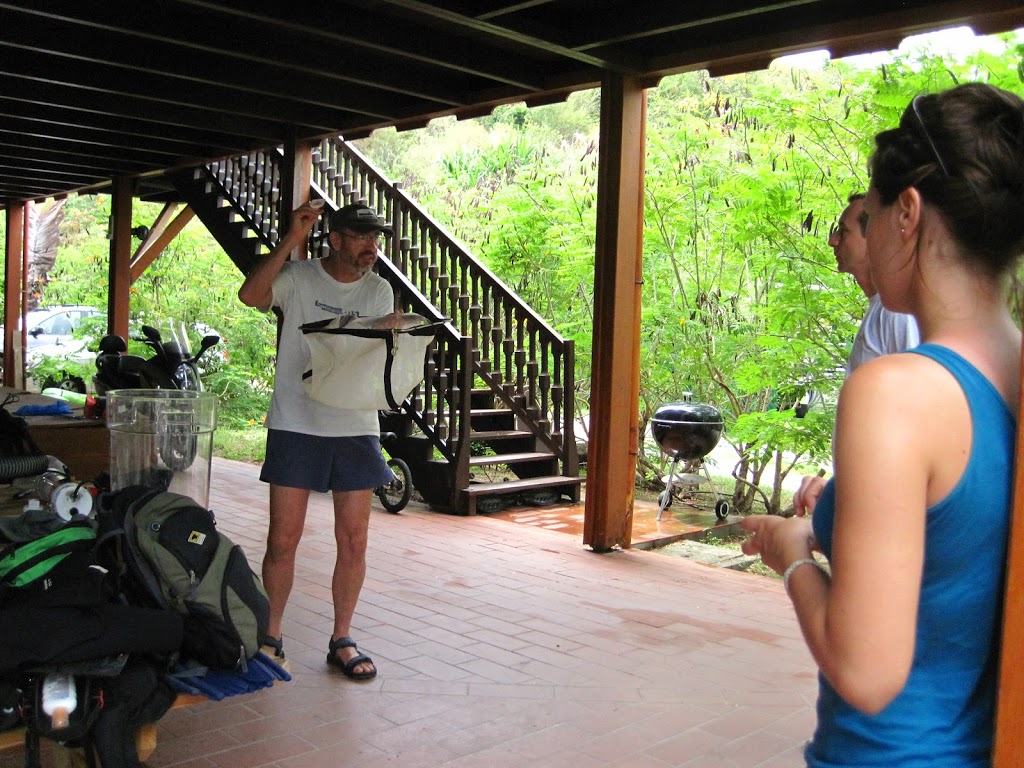 After that we were released on our own recognizance, and we took off for some some snorkeling and intertidal wading. Gustav and François donned snorkel gear. 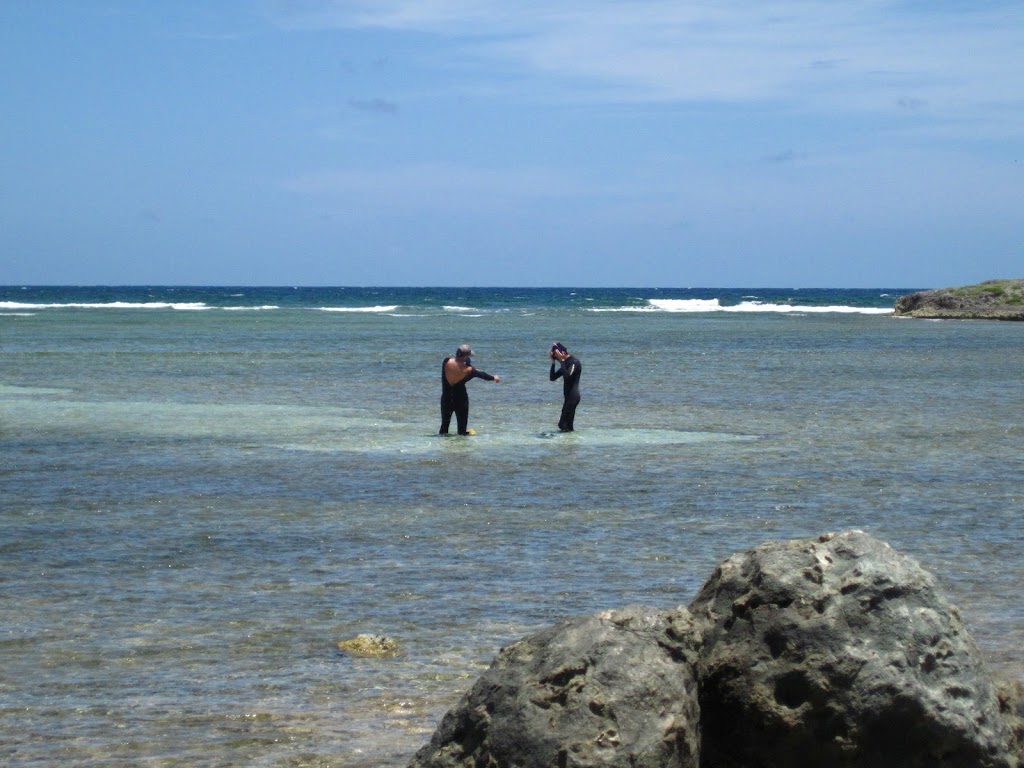 John, Jean-Philippe, and I braved the sun for some intertidal wading. 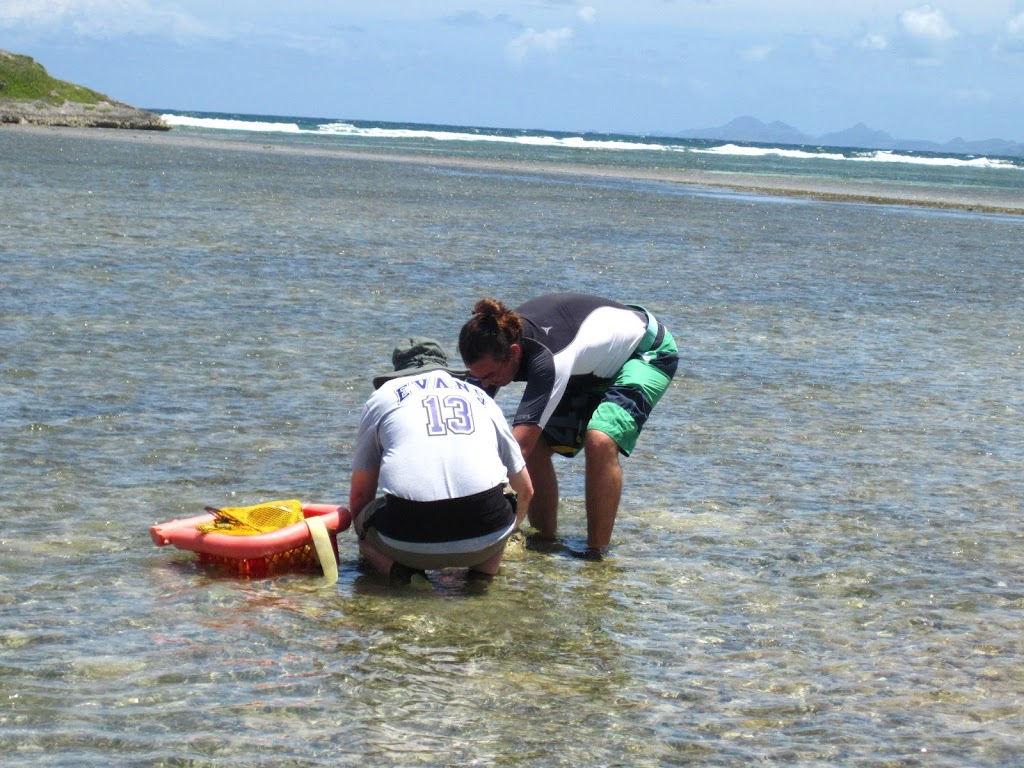 Of course, in our enthusiasm we bit off almost more than we could chew, collecting over 100 species the first afternoon and turning our nice, spacious accommodations into a crowded field station with an explosion of specimens sorted into tupperware, photo equipment, anesthitizing chemicals, preserving chemicals, vials, tools, field notes, collecting gear, computers, buckets, and bags as far as the eye can see. Behold this tiny subsample of our handiwork (before things got really crazy, before they brought us as extra table, before we started mass sampling). 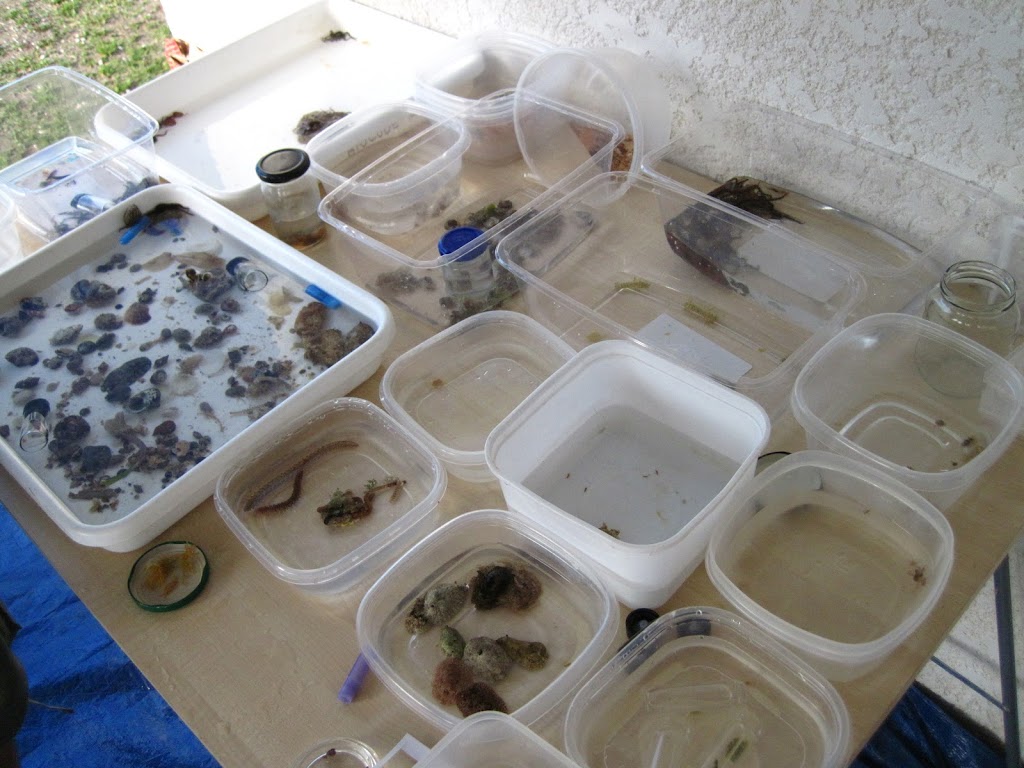 What is a mass sample you query? Instead of picking animals up one at a time we sample by habitat and then pick through later to pull out tiny or hidden animals. One example is sand sifting, which is exactly what is sounds like. 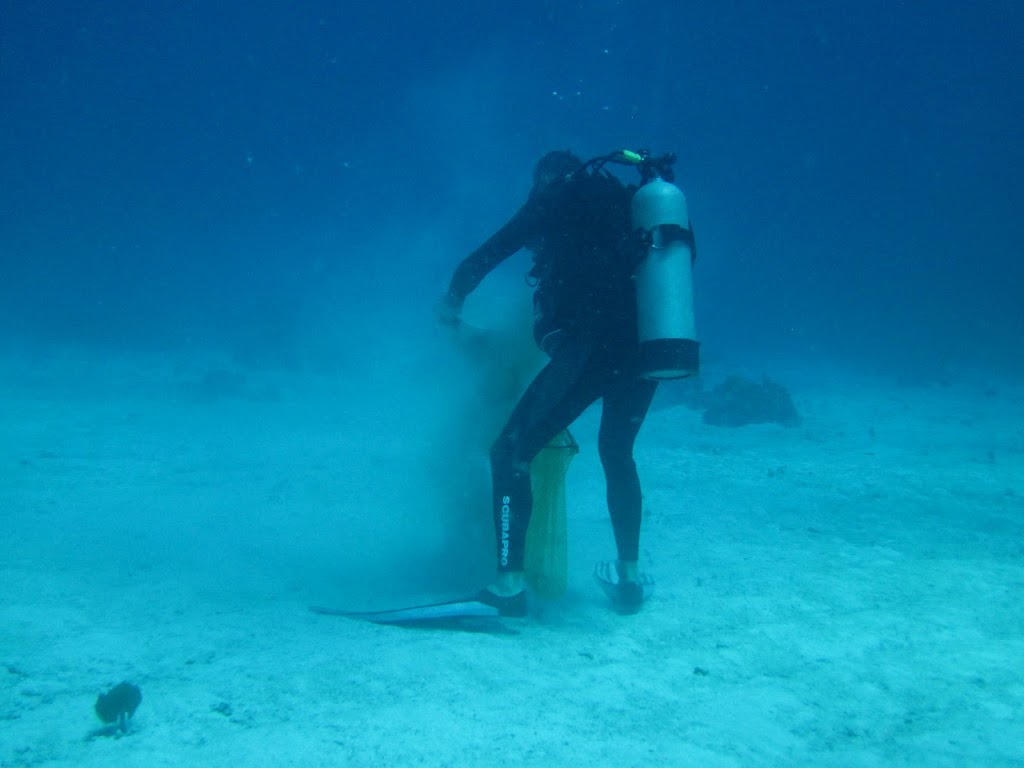 Another is rubble bashing which is also just what it sounds like. Here is some ideal rubble, pre-bash. 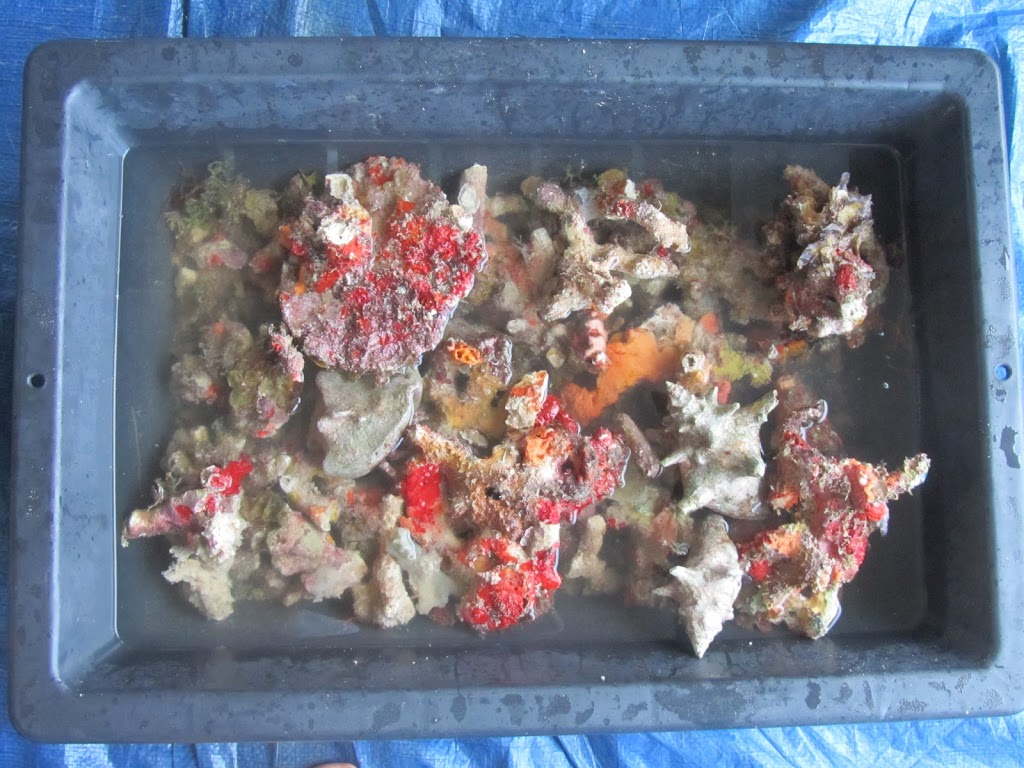 Mass samples deserve the lion’s share of the blame for keeping us up processing until midnight. They also deserve the lion’s share of the credit for the fact that we’ve documented around 300 species in 3 days (and the reason I haven’t been able to post until now). Despite these long hours, for some reason people still think we’re on vacation when we head to the field…well, maybe I know the reason… 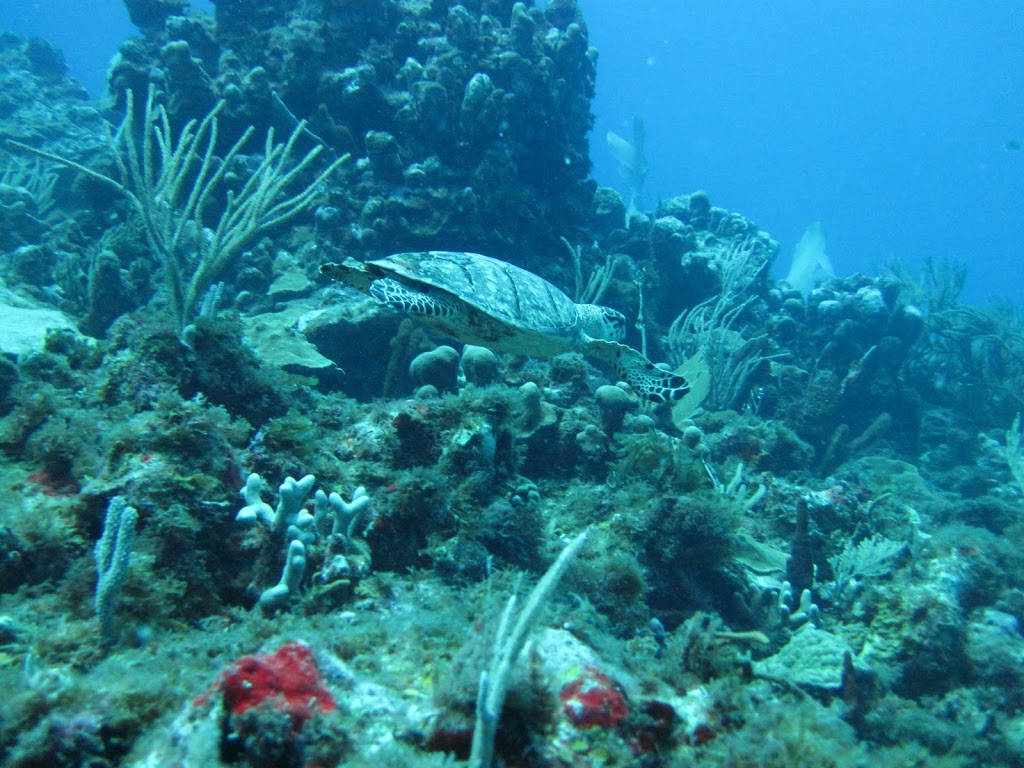 Check out all those invertebrates (plus host)!

2 responses to “The first few days: hit the ground running”