Looking at Humphrey the Whale

In 2017, we celebrated our 100th birthday as your state museum. We created an exhibit for this special occasion called Rare, Beautiful & Fascinating: 100 Years @Florida Museum, featuring striking and important objects from our collections. It was a wonderful chance to look back at our first century and look forward to the future.

Our exhibit team wanted to do something special that would remain in the Museum long after the anniversary exhibit closed. They decided to rearticulate a whale skeleton. No small feat! It’s not a project you can easily find on Pinterest or YouTube.

Our exhibit technician, a certified welder, fabricated a custom mount and articulated the entire skeleton. Research included visiting the North Carolina Museum of Natural Sciences to learn about how they had mounted the marine mammals on display there.

We studied whale anatomy and skeletal structure in order to get each bone in the right place. We also reviewed videos of living whales swimming underwater in order to create a lifelike pose and position for the head, spine and flippers. It was fascinating to compare the bones in the flippers to those in our hands and wrist.

So how do you safely and securely display an entire whale? It had to be strong enough to hold a very heavy skeleton but light enough to hang from our ceiling. Here’s a time lapse of what the project looked like:

After our anniversary exhibit closed, we moved the humpback whale skeleton to the Lastinger Gallery outside our Discovery Zone exhibit. Because it welcomes guests into the exhibit, we thought we’d let our visitors name the whale.

After a few rounds of suggestions and votes, a name was chosen. Our juvenile humpback was now called Humphrey! 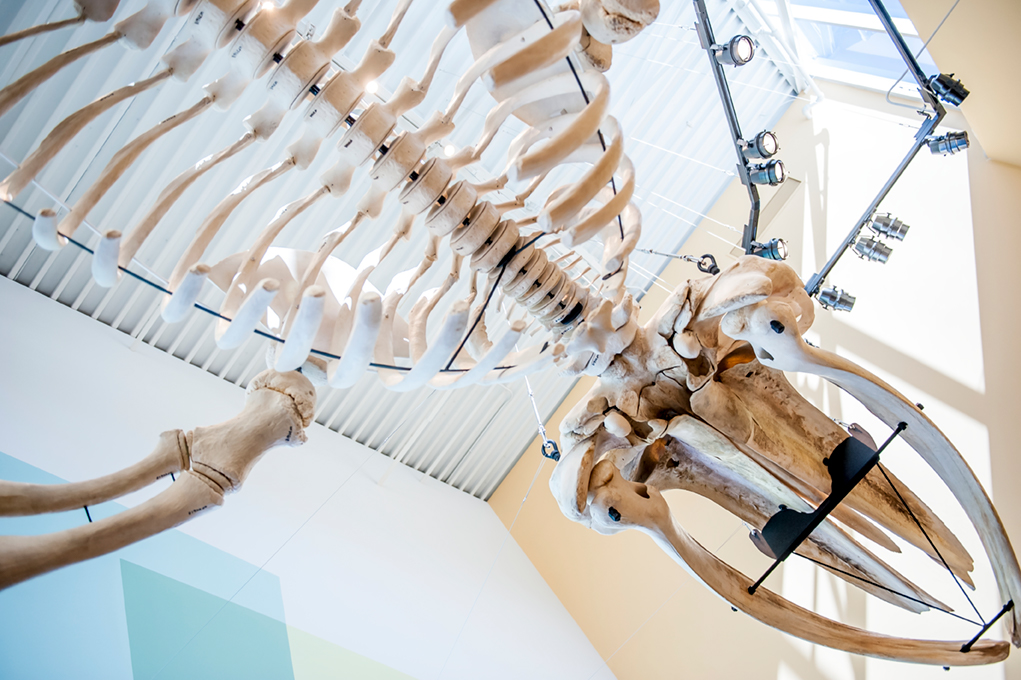 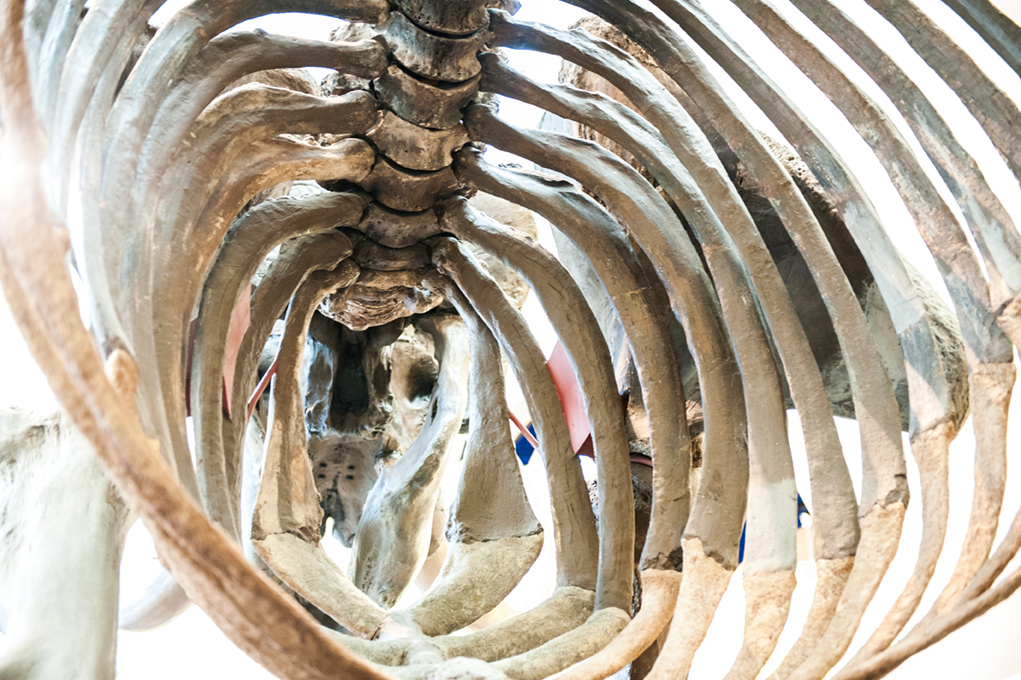 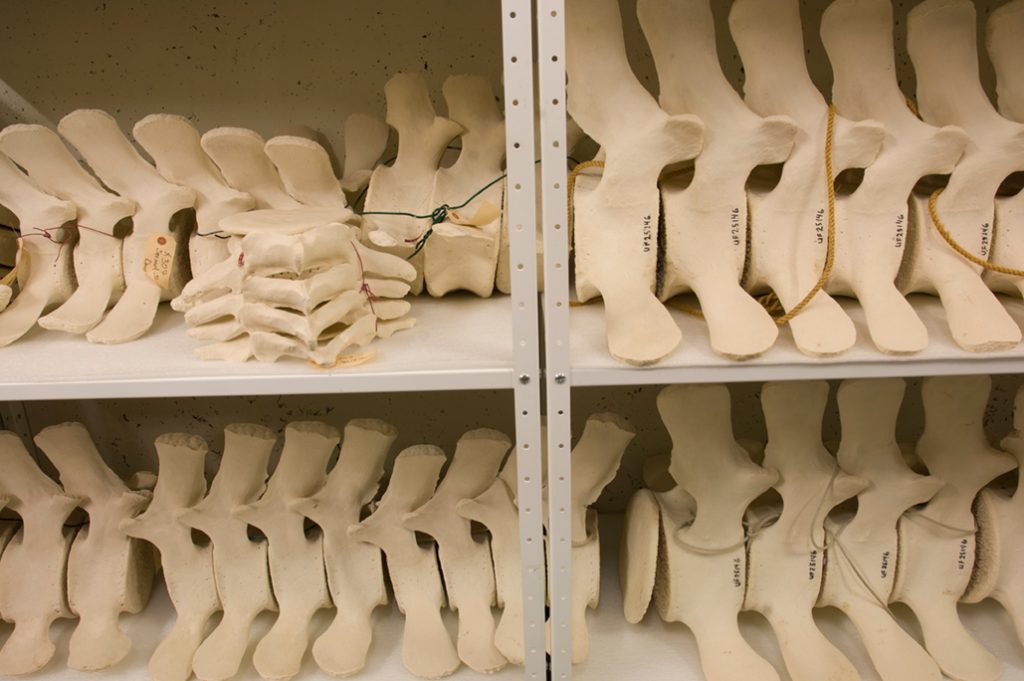 Whale vertebrae are cataloged in our mammals collection for research. Florida Museum photo by Eric Zamora 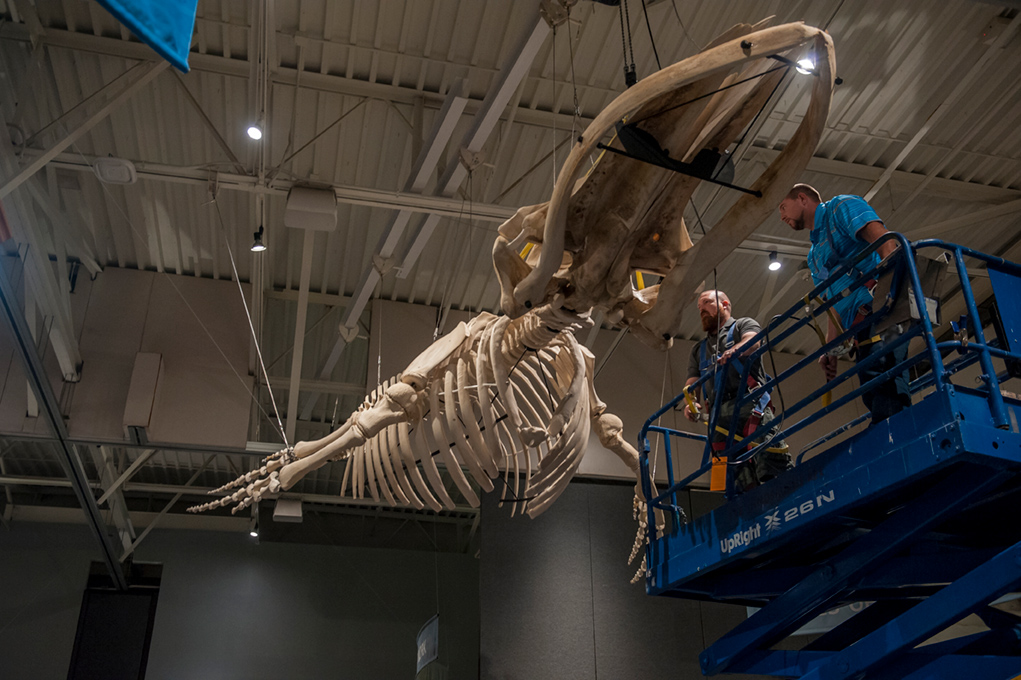 Our exhibits team had to make sure the whale’s support structure was strong enough to hold the heavy skeleton but light enough to hang from the ceiling. Florida Museum photo by Kristen Grace 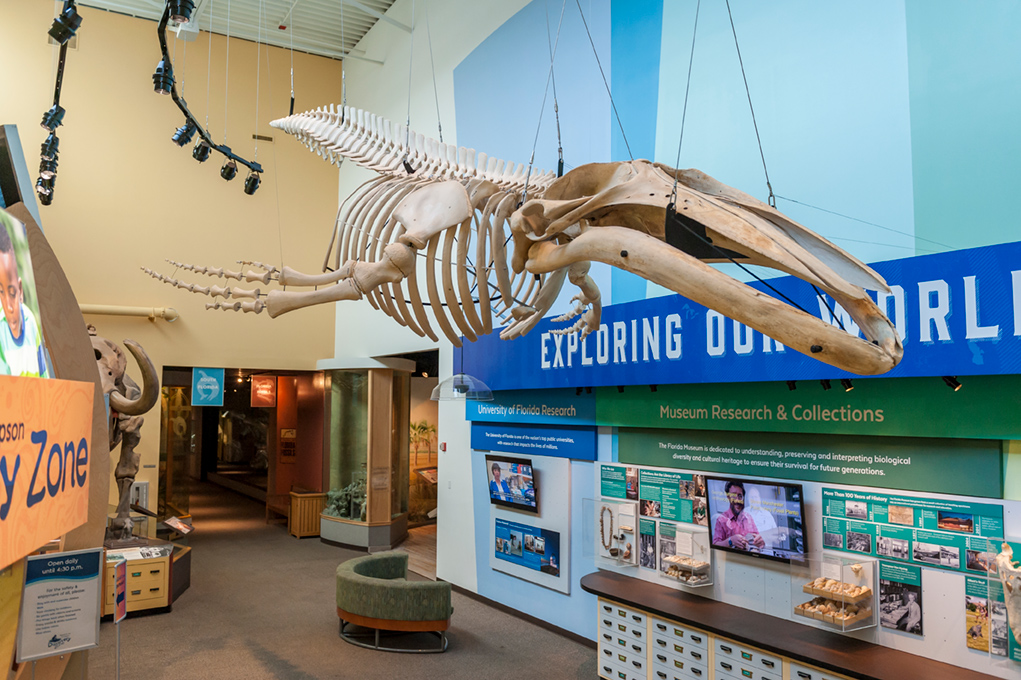 Because it welcomes kids into the Discovery Zone exhibit, we thought we’d let our visitors name the whale. They chose Humphrey! Florida Museum photo by Kristen Grace

In January 1990, a male juvenile humpback whale, Megaptera novaeangliae, washed ashore near New Smyrna Beach, Florida. Because the Florida Museum is the state repository for endangered species, the whale skeleton was eventually brought here for research and archiving.

When it came time to rearticulate his skeleton, we found that five of the smaller bones were missing—likely lost during the complicated process of letting nature break down the full whale to just his bones.

Our exhibits team had a plan for the few small remaining pieces though. They found digitized files of the same species and were able to scale them to a juvenile and 3D print them. Even the final color matched almost exactly. Can you tell which were printed?

Now you can walk below Humphrey and imagine how big he was—and how big full-grown whales are as you head into the Discovery Zone or toward the Florida Fossils exhibit.