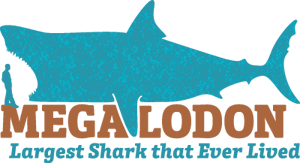 This 5,000-square-foot traveling exhibit highlights the evolution, biology and misconceptions of Megalodon, an enormous prehistoric shark that once cruised all the world’s oceans. Related to the modern great white and mako sharks, Megalodon was a dominant marine predator for 15 million years before vanishing 2 million years ago.

The exhibit conveys current research findings of Florida Museum paleontologists, and showcases both fossil and modern shark specimens and full-scale models from several collections. People have collected Megalodon teeth for thousands of years, and today Megalodon has near-cult status. The exhibit capitalizes on the public’s fascination with fossil sharks as ambassadors for science and shark conservation.

Be consumed with awe, walk away with respect!

Walk through full-scale jaws into a 60-foot-long Megalodon sculpture and begin to explore the story of this fantastic ancient creature – its size, structure, diet, lifespan, relatives, neighbors, evolution, extinction and the science that continues to reveal Megalodon’s tale. Tooth-shaped island units support interpretive materials, which include graphics, hands-on components, and family- friendly interactives. The exhibit is object-rich, including numerous fossil specimens from several collections, and life-size and scale models of other fossil and modern sharks.