When we arrived at the dig site, I was immediately struck by how much mud had been washed in with the rain during the previous week. We started the day by setting up the site and removing the tarps covering areas currently being excavated. Once more volunteers arrived, we began using small shovels to remove excess sediment that had washed in with the rain. Once I had dug out a new section with the shovel, I began using a screwdriver to dig and probe for fossils. All of the fossils I found were from a small area with coarse sand. I learned that coarser sand is indicative of an area of the ancient site where water flowed with relatively large force—large enough to move bones as well as coarse sand. My favorite fossil that I found was the claw of an alligator snapping turtle. 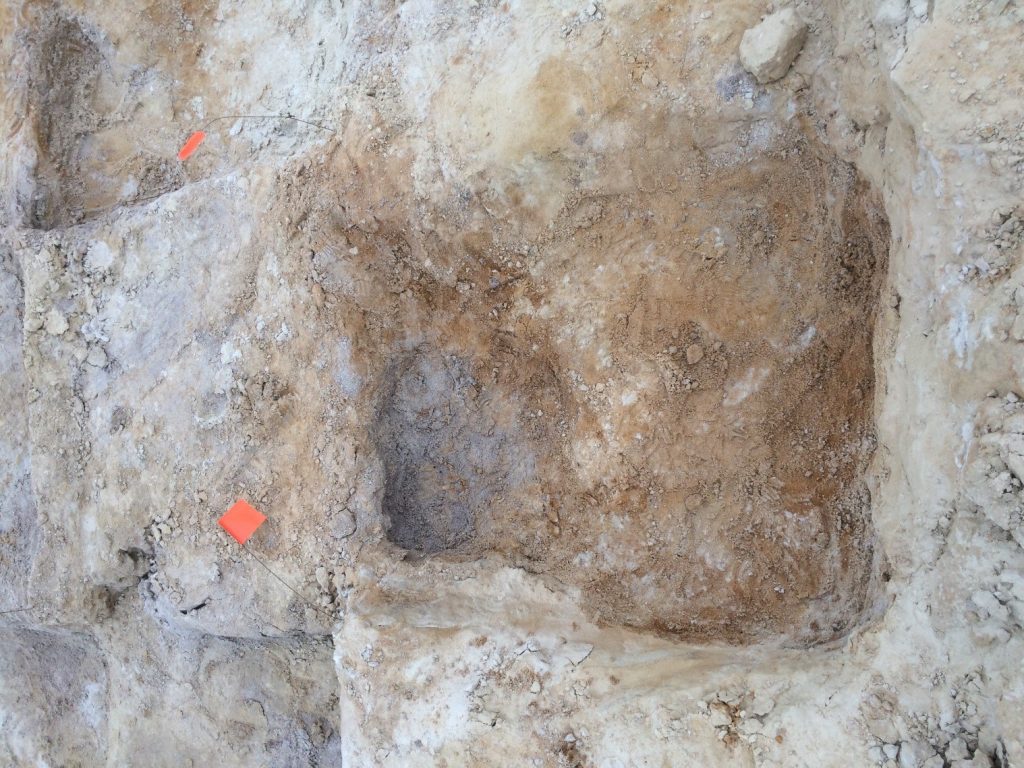 This is what the square I dug in looked like by the end of the day. The darker area in the top left is where the coarser sand was, and where I found the fossils. 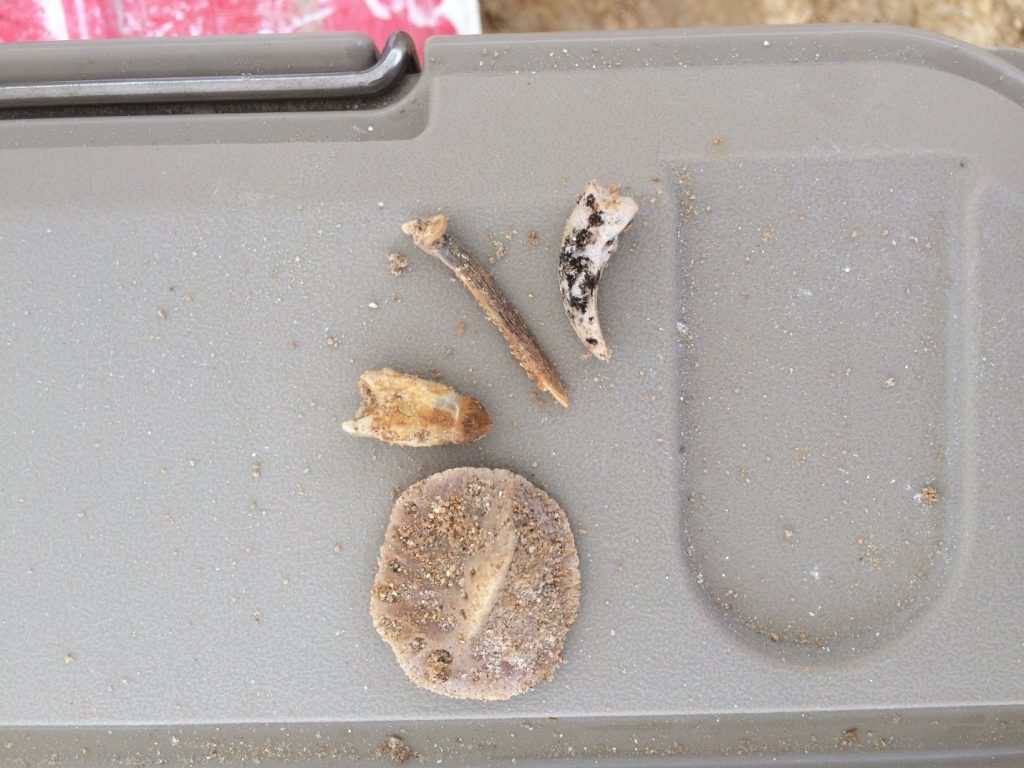 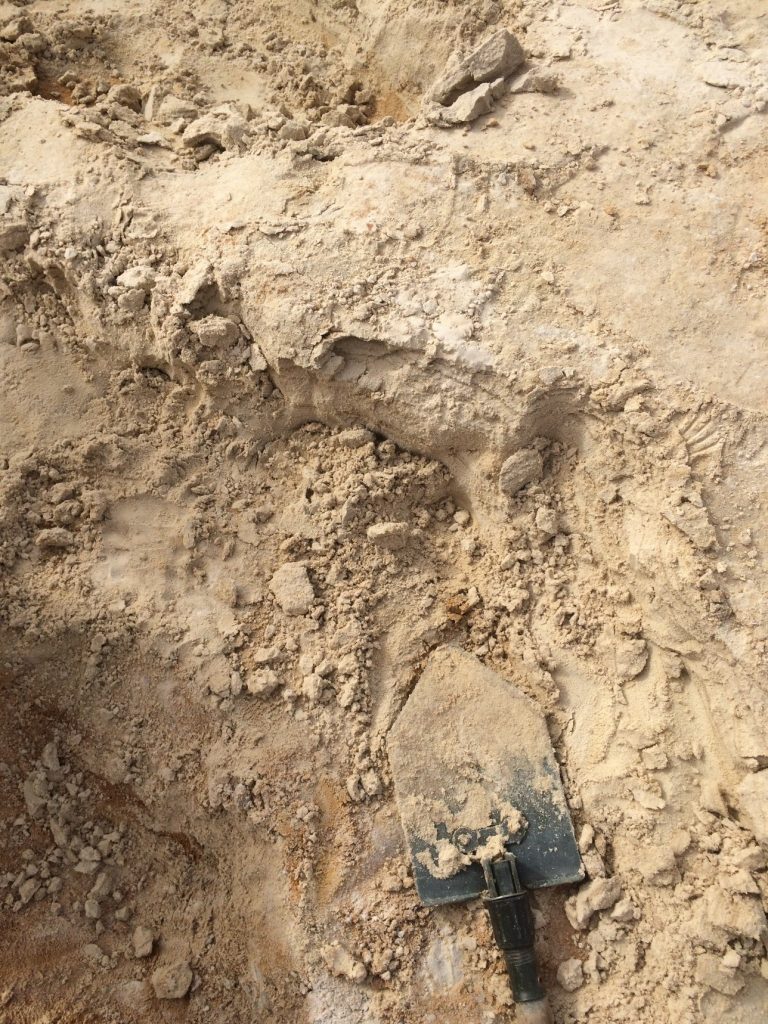 Removing the sediment washed in by the rain. I continued to dig in this square for the rest of the day. 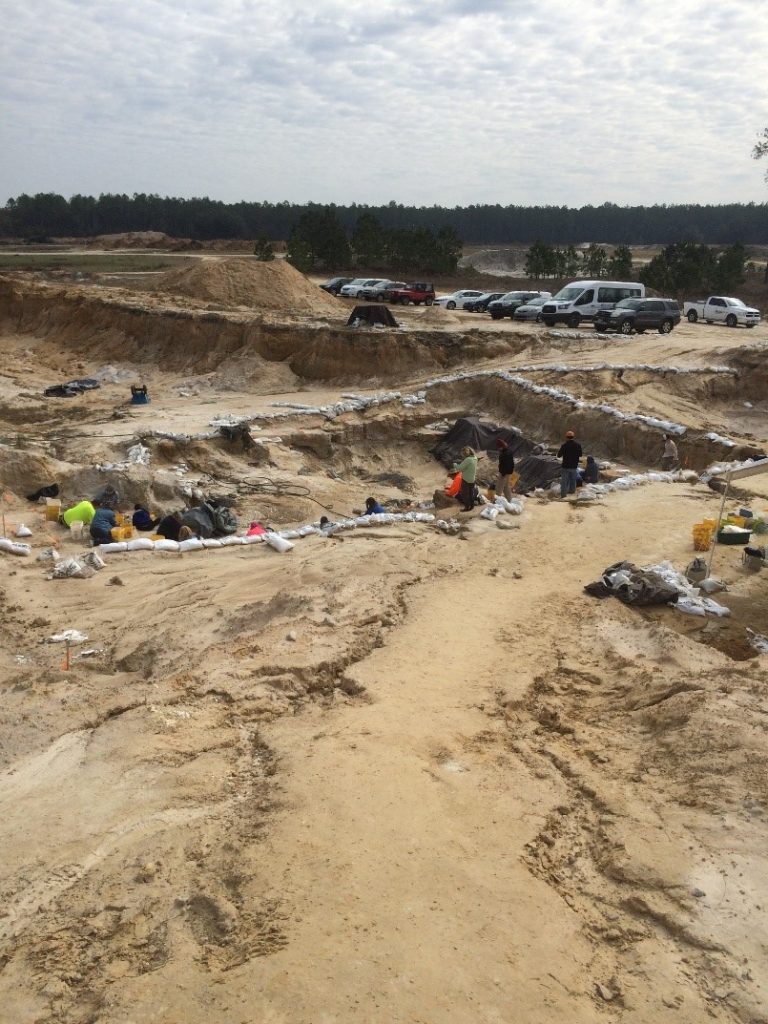 A photo of the site. You can see some of the marks in the sand from rainwater flowing through.

Most of my experience looking for fossils comes from creeks and rivers, so it was interesting to see the different challenges of digging for fossils in a clay and sand environment, such as the issue of rain washing in sediment. I had also never been on a controlled dig site of this scale, and I was impressed to see the sheer amount of work that has gone into excavating the pit.

Since my last visit to the site, an impressive amount of sediment had been removed from the pit. The deepest part of the pit had been cleared of the sediment that washed in, and the jaw of a prime-age adult gomphothere was now above ground within its plaster jacket. Some other students and I spent the day digging around the jacket to prepare it to be flipped and taken out of the site. This jaw was an important discovery as it is the most complete part of a prime adult found at the site so far—the other gomphothere jaws and skulls either belonged to juveniles or elderly individuals. We also found many bones while digging around the jacket, including alligator, turtle, and more gomphothere. I enjoyed being a part of the team working on removing the jacket, as I have never worked on extracting a plaster jacket before and I enjoyed seeing what goes into this process firsthand. It was also interesting to see a nearby pile of fossils that had been displaced by the rain previously. These fossils are less valuable to science, as they do not have the same precision in locality data, but they were exciting to see exposed nonetheless. 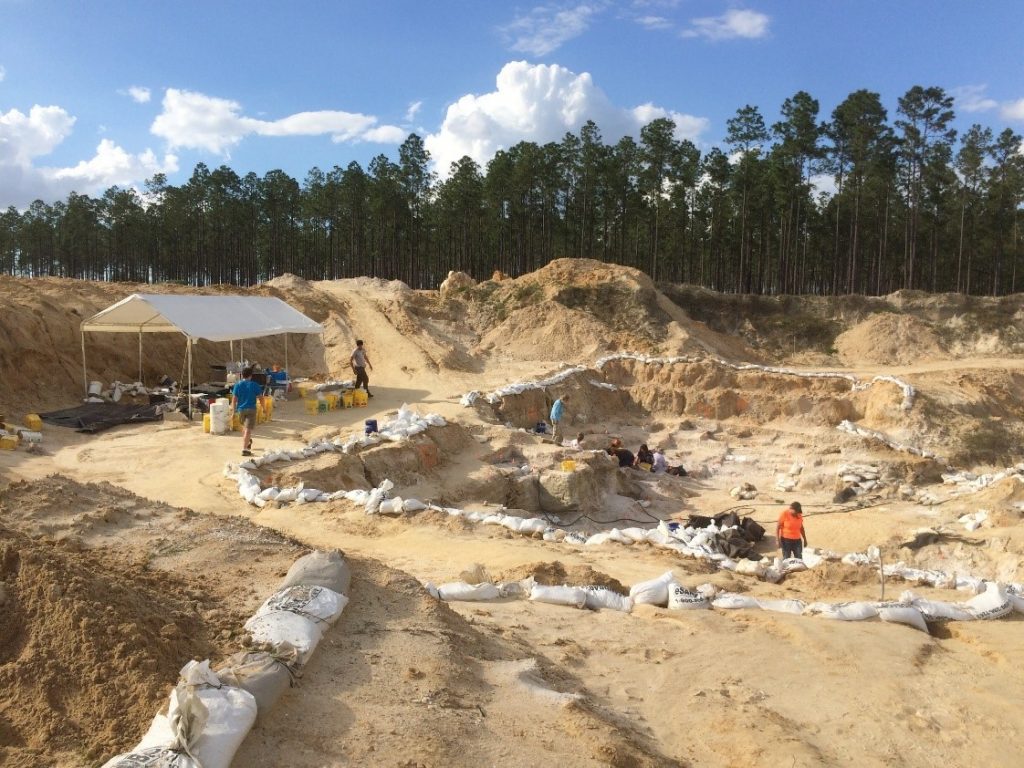 It was a sunny day at the site. 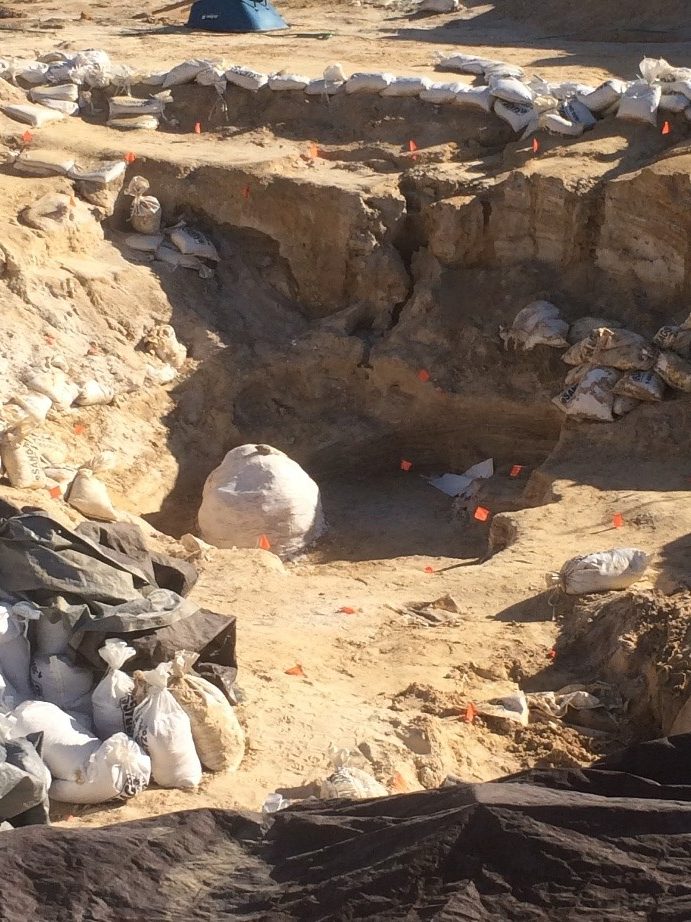 The jacket when we arrived in the morning. 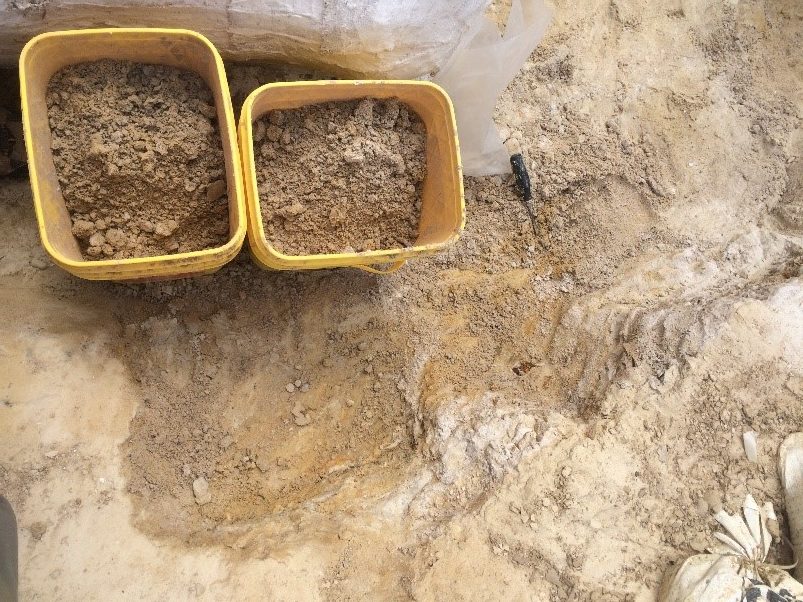 Digging around the jacket. 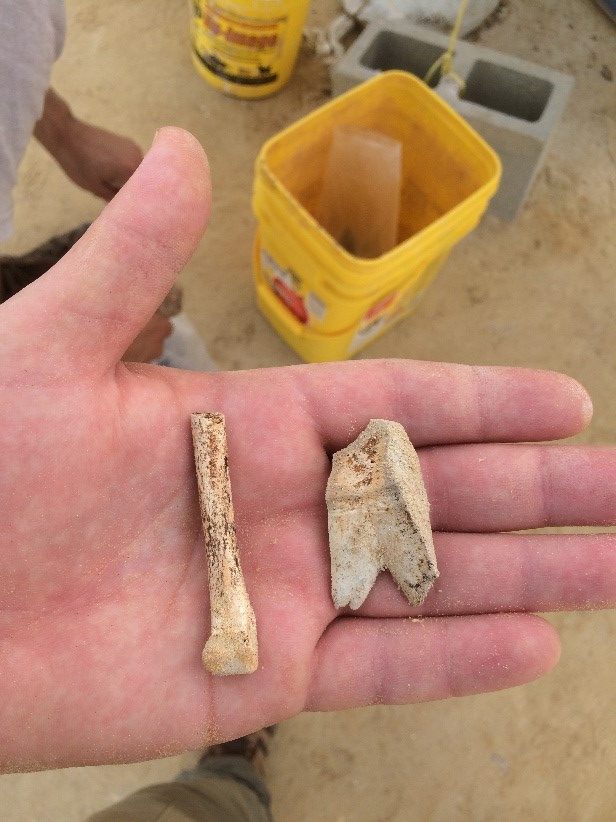 A couple of the bones I found while digging around the jacket. Part of an alligator foot on the left and part of a turtle carapace on the right. 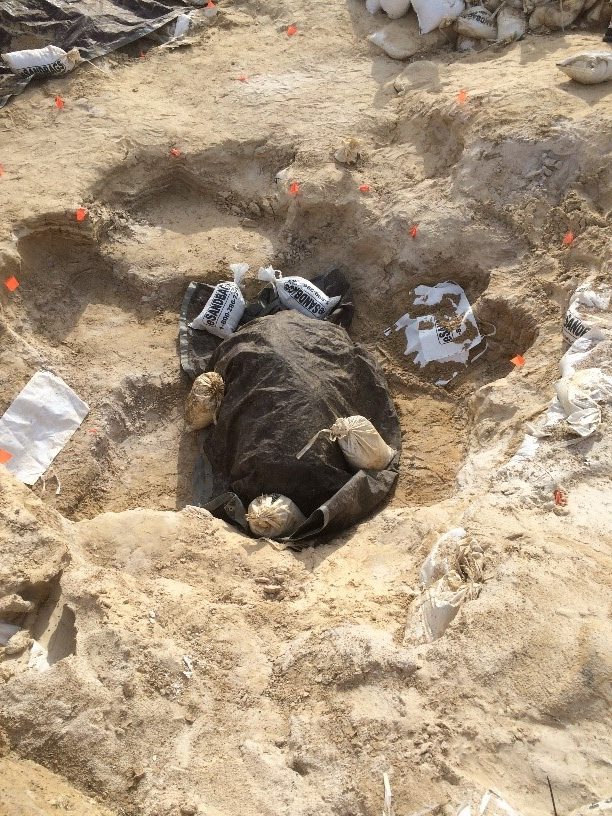 The covered gomphothere jacket as we prepare to leave for the day. 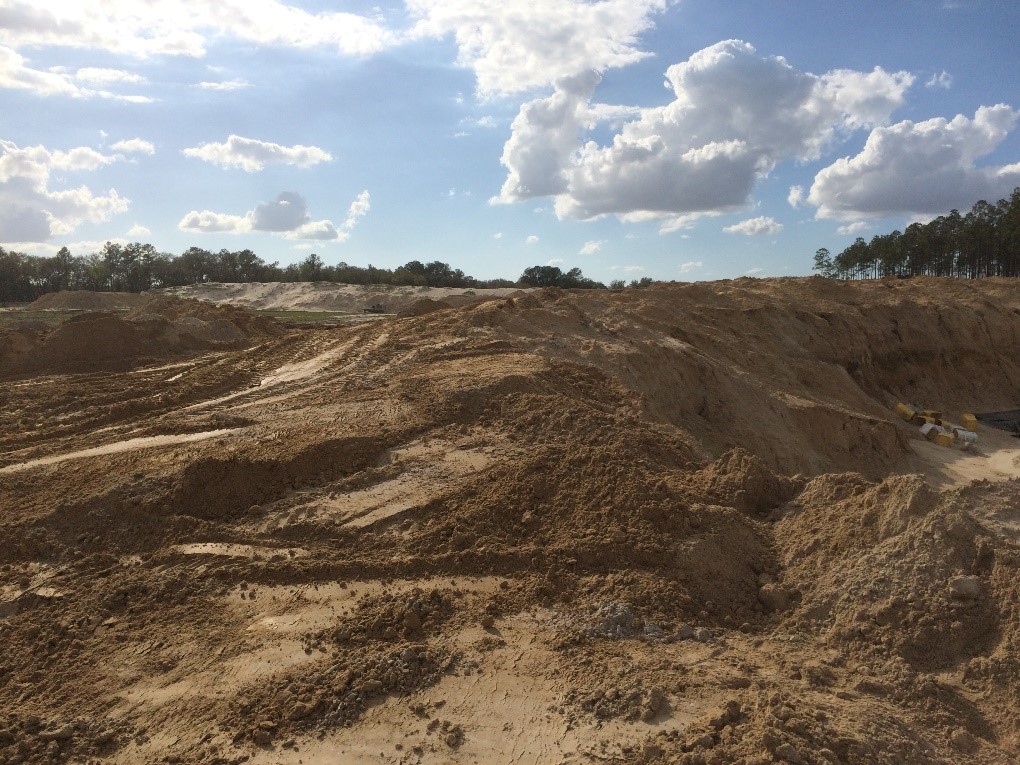 Soil was being cleared from around the site throughout the day to reduce the amount of sediment that runs into the pit during the rain. 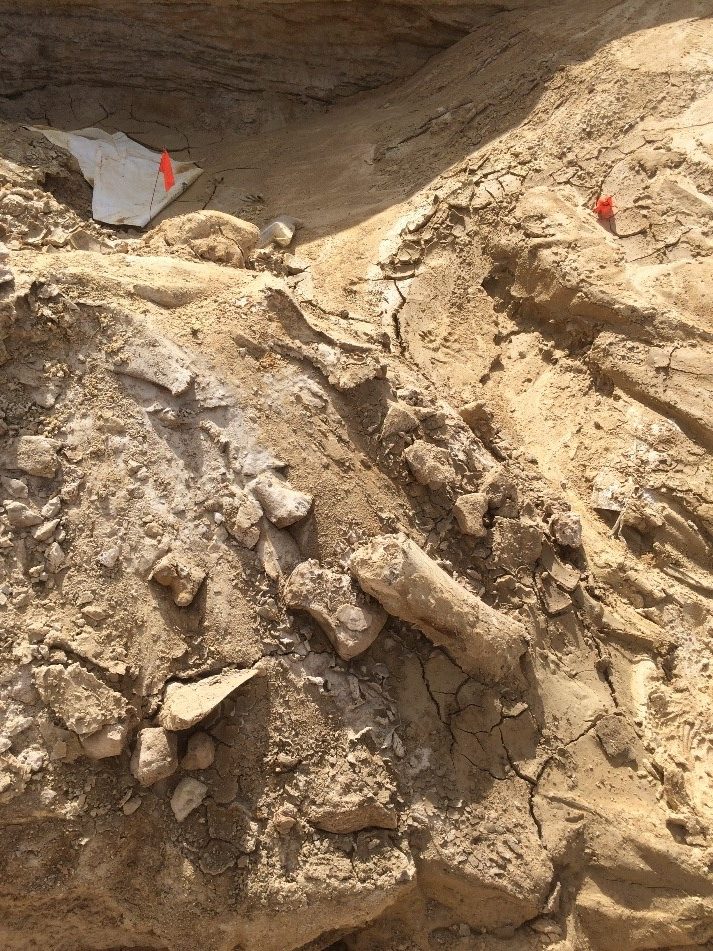 Some of the fossils that had been displaced by the rain, including several gomphothere bones.

Due to recent storms, there was more mud that had washed into the dig site. We spent the first hour removing some of the mud, then we began digging for fossils. I spent most of the day working on a small section with a partner, and I was surprised to find several shark teeth from two different types of shark.

The Montbrook site is an ancient river, so I was curious why evidence of these marine animals was turning up. I learned that these shark teeth were much older than most of the fossils at the site, and this was because the ancient river at the Montbrook site had eroded the riverbanks and exposed the fossils that were in the sediment already. The shark teeth that we found were already fossils at the time of the Montbrook site five million years ago, and were from a time when Florida was below the sea, which I found fascinating.

After digging, we stopped by an offsite storage facility for the fossils. We dropped off the matrix bags from the day, bags full of sediment we collected to be sifted through for smaller fossils, and the various bones found throughout the day as well as a couple plaster jackets containing turtle skeletons. It was interesting to see so many fossils in one location, and it gave me an appreciation for the countless hours of work that have gone into excavating the Montbrook site. 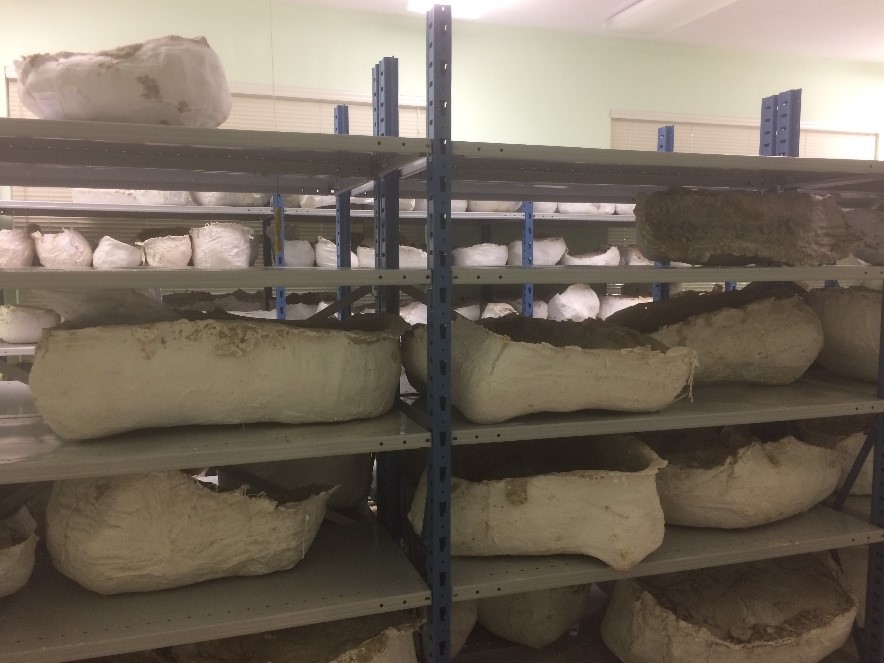 A few of the many plaster jackets in storage. 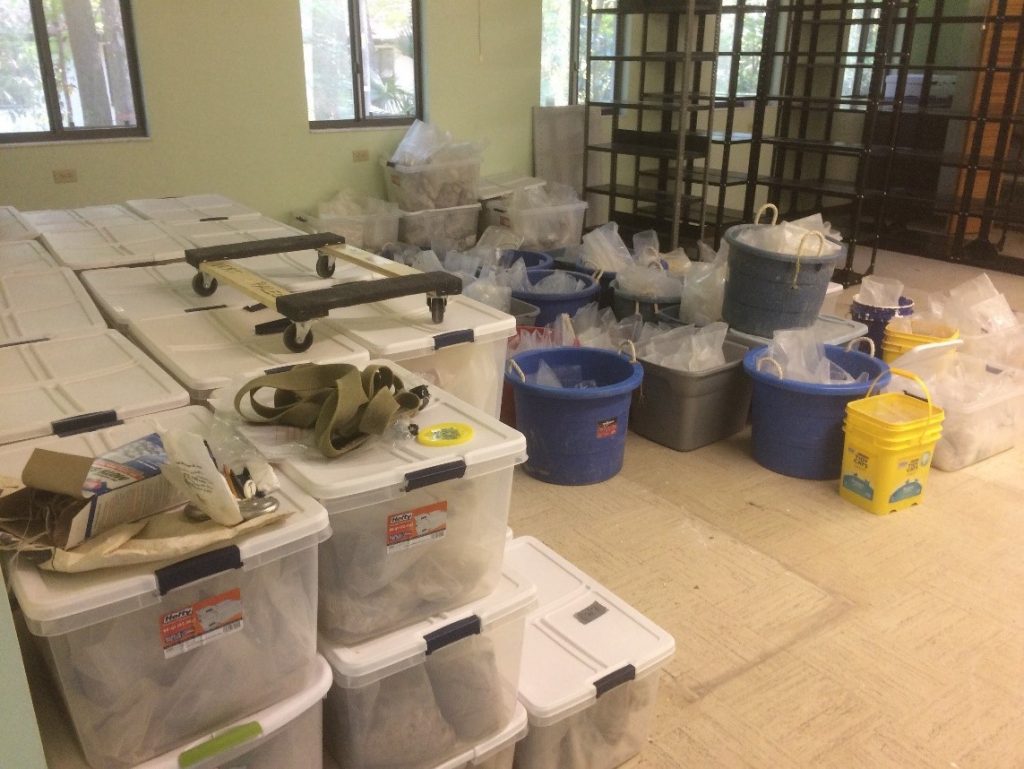 The bags full of bones in storage. 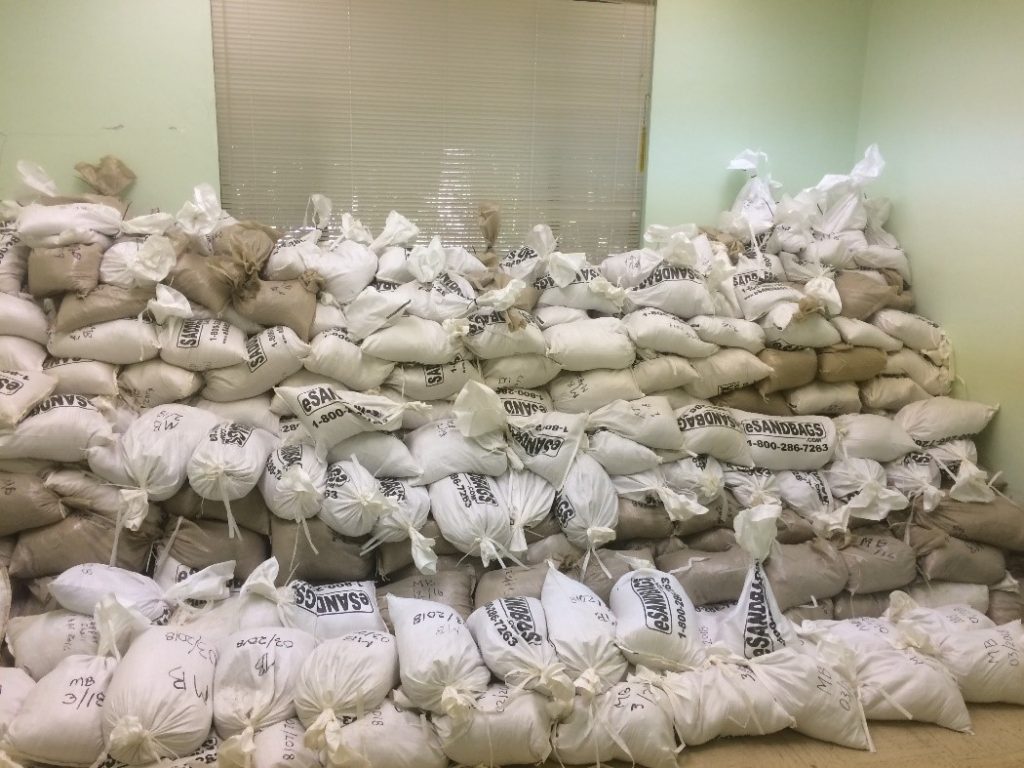 The matrix bags in storage.