On my first day of digging, I wasn’t really able to find anything and I was mainly leveling off the square I was assigned in. The guy next to me somehow managed to find everything in his square. Every half-hour, he found something. He had lots of interesting stories to tell as he had come from New York in car and had stopped at several different digging sites along the way.

On my second day, the discovery I was most excited for was the pygal (top-left picture). It is the bottom a turtle’s carapace (or shell). On my third day, I was able to uncover a good majority of a big fossil, but I was unable to tell what it was. Uncovering it was super fun and I went through the whole day without being able to uncover it completely, which means it’s a pretty big fossil. On my fourth and final day of digging, I made my most exciting discovery yet which was a shoulder. I was excited about this one because it was the first fossil I was able to recognize when I dug it out. I had accidentally mistaken the pygal for a tooth, beforehand. 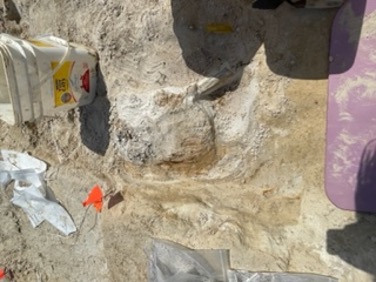 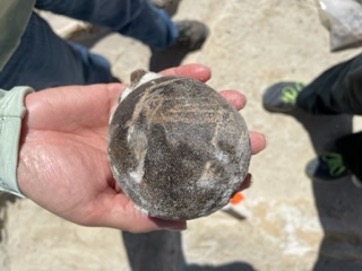 I also worked at the museum. I worked on the weekend, so there were a lot of kiddos there to ask questions. I was mainly working at the front, preparing a jacket. What this means is that there is a fossil inside a jacket and there is also lots of dirt inside. I had to work on uncovering the dirt inside the jacket in order to find the fossil. Mine was a turtle jacket, which means at the bottom of it was a turtle fossil. I had a lot of fun digging it up and was able to find some mini-fossils scattered within. Answering the questions kids and adults asked were super fun, as well, and was probably my favorite part of the whole experience.