My experience at the Mont Brook digging site was quite an interesting first adventure. The day started off with helping fellow classmates and my professor uncover a fossil that had been covered with a tarp from the previous day. The tarp was covered with a thick layer of sodden soil. The work consisted mostly of transferring the mud from the tarp to a separate location so that it could be removed and the fossil of a possible prehistoric mammal (prehistoric elephant) jaw could be further excavated. The fossil was scheduled for plastering soon which is a process of protecting a fossil at the dig site and preparing it for travel. The fossil is coated in soft plaster and the fossil is removed. The fossil is protected during the trip by the plaster which is later removed.

I was wary about using a screwdriver as a digging tool but as the morning wore on I saw that the tool was adept at separating the soils without damaging any delicate fossils. I was disappointed that neither my friend nor I were able to find any fossils in our assigned plot; however, we did find some small treasures that made the trip feel successful. An alligator tooth, a snake vertebrate, a turtle shell, and fish bones were among a few fossils found by my classmates and my professor.

The large open area where the digging takes place in is mostly divided up into squares to ensure where a fossil is found because certain fossils from a specific location could lead to specific time eras. The sediment that we were digging through was smooth and soft with tougher edges on the outsides of the squares. As I was digging deeper into the earth, I came across different layers of sand and various rock formations along with some phosphate deposits. 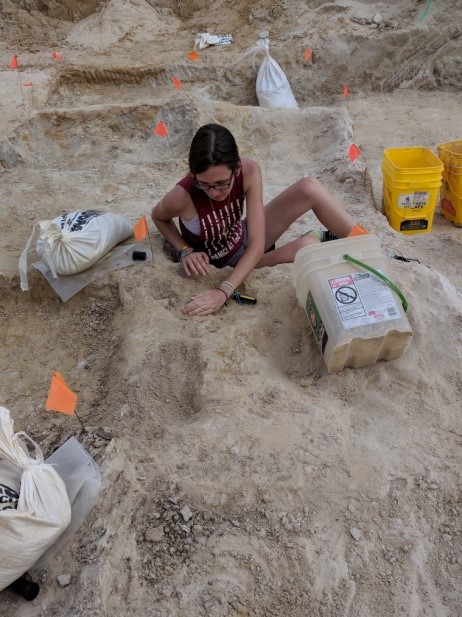 Figure 1. Early stages of digging one of the assigned digging plots. 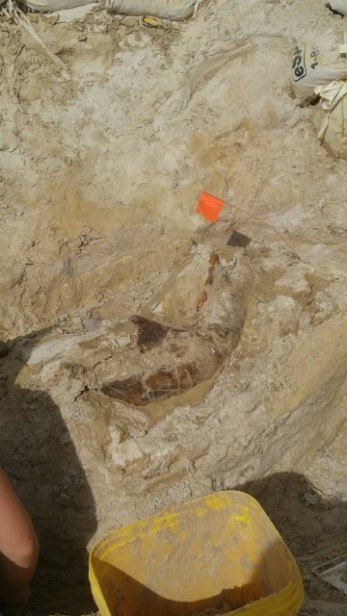 On my second excursion at Montbrook, I discovered various fossils. Unlike my first trip, I discovered a variety of small fossils that renewed my excitement in going to the dig site. On this trip, I was able to locate fractured pieces of a turtle shell, a turtle vertebra, and pieces of the femur of a turtle, a possible catfish vertebrate, and multiple fish spines.

The turtle that I discovered was a pond slider turtle. The shell fragments, although small, were clean and pronounced as shown in Figure 1. In figure 2, this particular piece of the shell demonstrates some smooth groves which are a clear indicator of a fossil. The groves were extremely helpful in making the distinction between a stone or pebble and a fossil. My discovery was not far off from of two pieces of a femur, which I was impressed and exited to discover connected quite nicely. The square that I was digging at seemed to be an area where this specific species of turtle the pond slider deposited. Alongside my shell and femur findings, there were two other sections that looked like it could possibly be more turtle fossils. My personal excursion ended with cleaning off all the fossils I discovered and placing an empty sandbag over the other exposed fossils. 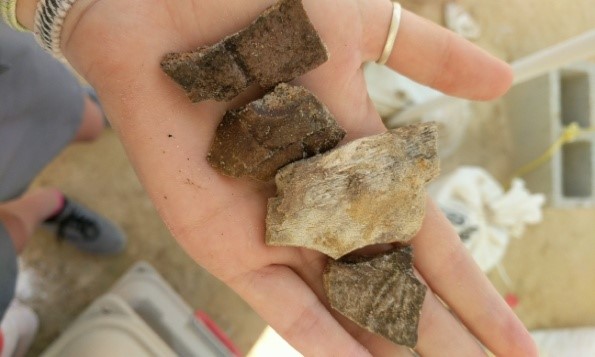 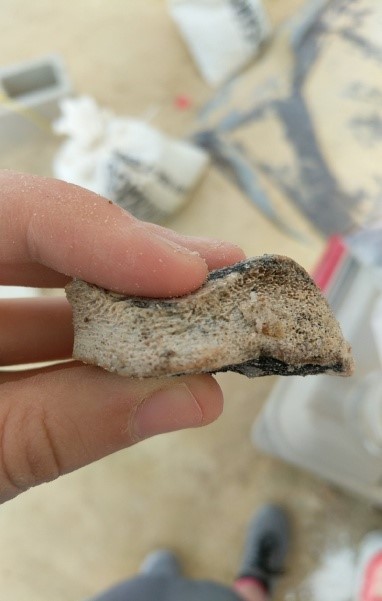 Figure 2. A fragmented piece of the turtle shell showcasing the nice groves of the shell. 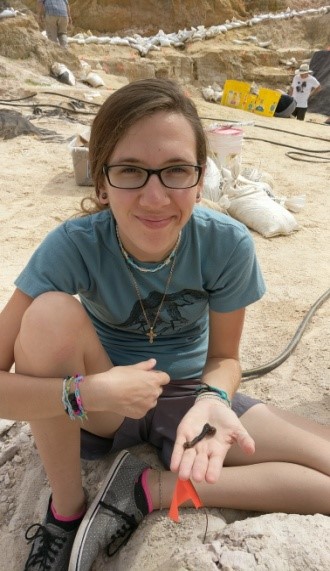 Figure 3. The two pieces of the disassembled femur bone of the turtle.

While visiting the dig site I was fortunate enough to witness some of the Gomphothere jaw removal. This massive bone needed a team of seven people to attempt to remove it from its location. Two weeks ago, the jaw had been successfully plastered and was finally ready for an attempted transfer from the dig site to the museum. The gomphothere “Jacket” at Montbrook is estimated to weigh over 1,000 pounds; this makes transportation tricky. Although it was not entirely successful, (the jaw split in two pieces, almost directly down the middle), it did give me a chance to ask other more experienced students about the process that was being used to remove the fossil from the ground. First, a deep wide trench is dug around the fossil to create access to the fossil in order to cover the fossil with plaster. This creates a “Jacket” which is supposed to protect the fossil during transportation. Next, a net was placed on the ground around this massive fossil and straps were placed to aid in lifting. Finally, an attempt to lift and remove the fossil can be made. Some fossils do not require suck large groups to remove them. One example of this would be the removal of a rhino scapula earlier that day. The excavation took a fraction of the time and only required two people to the gomphothere’s seven or more. 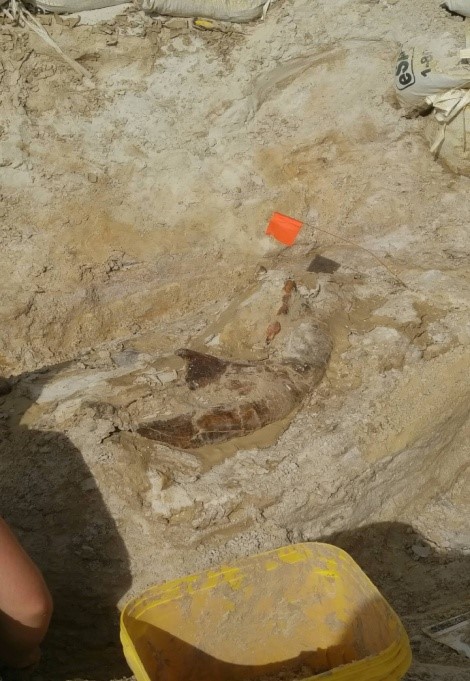 Figure 4. The jaw of the Gompothere without the plaster jacket. 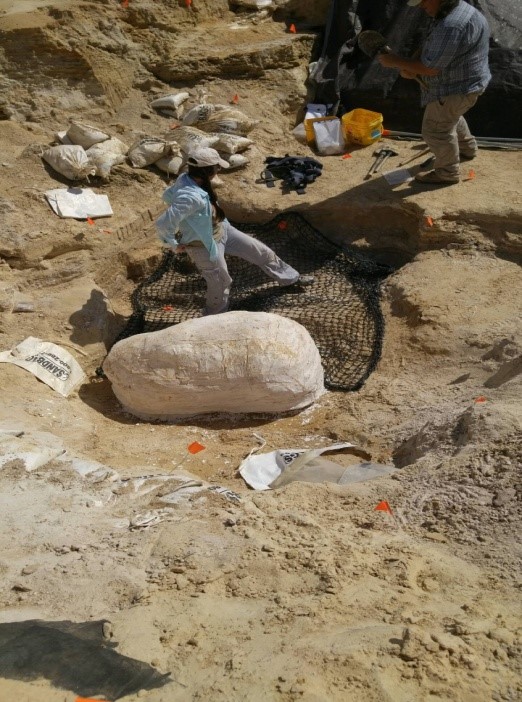 On my last two excursions at Mont Brook, my findings were more exciting than the first couple times out at the site. The types of fossils I found varied from reptiles to mammals revamped me to continue my digging adventure. On the last trips, I located various pond slider turtle fragments, multiple fragmented fish bones and spines, pieces of the shell of a soft shelled turtle, a piece of the rib of a Gompothere, the scapula of a Gompothere and various jaw and skull pieces of the same mammal.

The soft shelled turtle that I discovered was in really nice shape, the piece of the shell was intact, and it was very smooth and had nice ridges. The tracameze is more commonly found which wasn’t as exciting but I came across multiple fragments of the back side of its shell. The fish bones and spines that I found were all broken in some manner and they were very fragile. None of the fragmented pieces that I had found in my square did not look like they were part of the same area or species of fish.

The mammal that I discovered was a Gompothere. The findings were significantly larger than the turtle fragments that I had been finding the last couple of times I went digging. Even though they were large, they were pretty clean and intact for the most part. The scapula that I had found was buried under layers of mud and took about a 1 and a half to locate the whole bone. Once found, my professor and I began to lift it out of the ground and bag it for safe keeping. Unfortunately, the scapula originally had a crack down the middle that was present when it was stuck in the mud/sand mixture so when picking it up, some of it fell apart. Underneath the scapula, was a piece of a rib of the same animal. I was digging in-between two squares that seemed to be an area where this specific species of a mammal deposited.  The afternoon ended with rinsing off all of my fossils and putting a sandbag over any exposed fossils I had in my square. 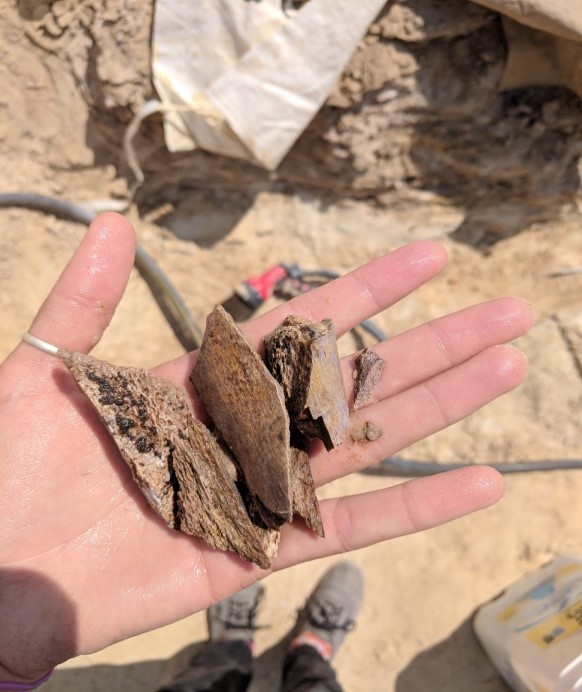 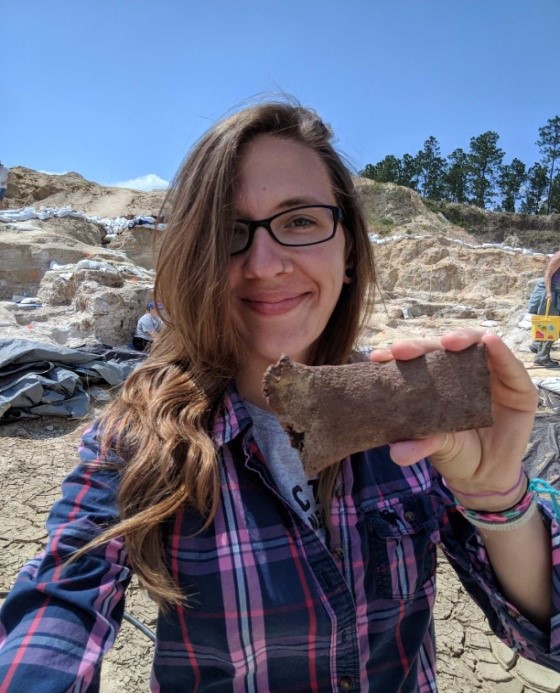 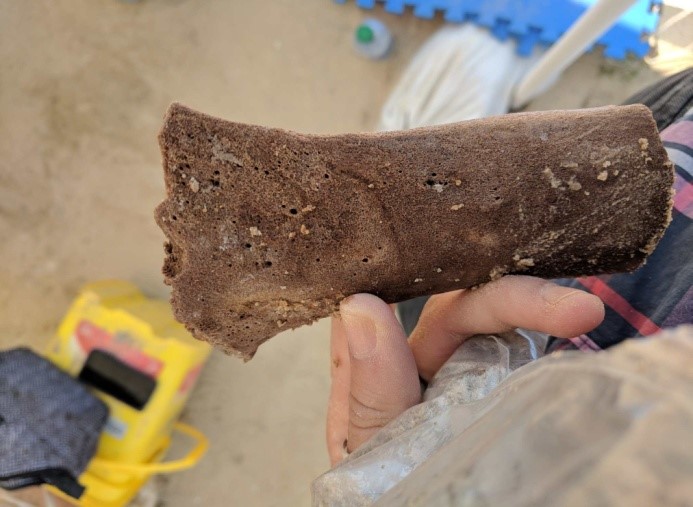 Close-up of the Gompothere’s rib. A closer look at all of the ridges and crevices. 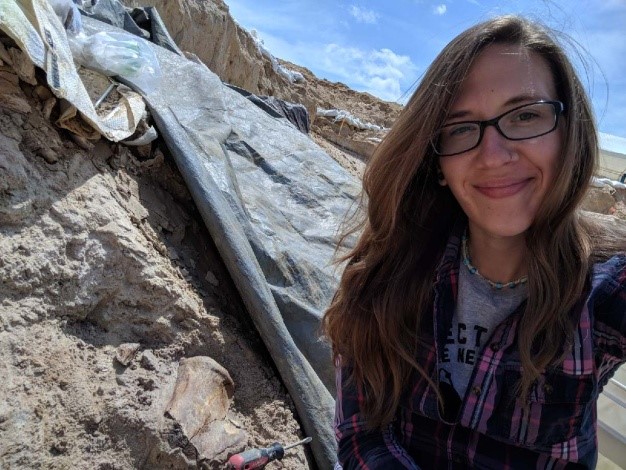 Me pictured with the exposed scapula of a Gompothere behind me. 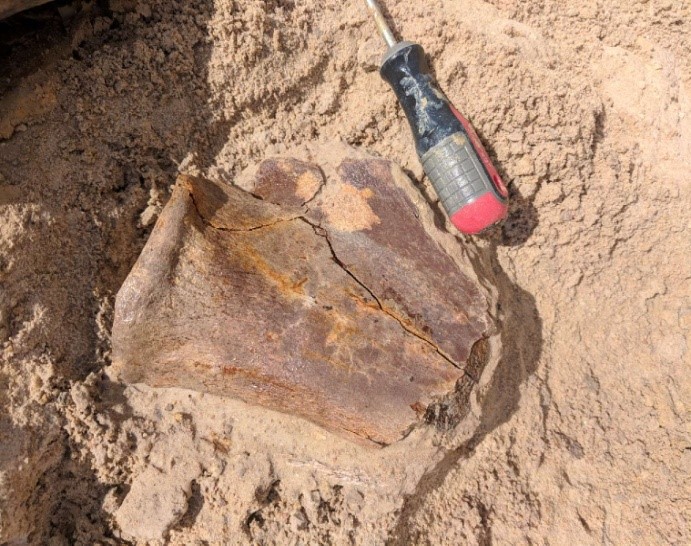 Close-up of the Gompothere’s scapula. 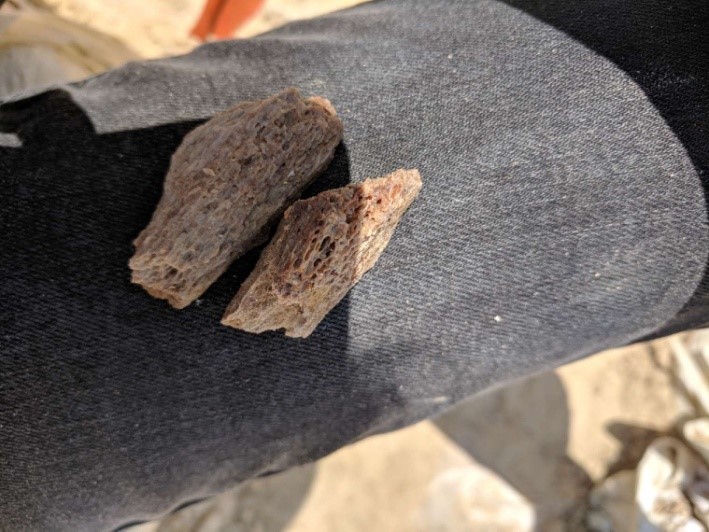 Two pieces of a possible skull or jaw of a Gompothere.