Dasypus bellus was about two to two and a half times the size of the living nine-banded armadillo (Dasypus novemcinctus).

Source of Species Name: from the Latin word bellus, meaning “beautiful” or “pretty”. This is not one of the adjectives usually applied to armadillos, so Simpson was perhaps being ironic in this choice of name; but as he did not state the reason for the name in the original description, we will never know his extact intent.

On average, the osteoderms of the shell and the limb bones of Dasypus bellusare about two to two and a half times the size of those of the living nine-banded armadillo Dasypus novemcinctus. Fossils of Dasypus bellus have been found at many types of sites in Florida, including caves, sinkholes, river sites, coastal, and lake deposits. Isolated osteoderms are the most frequent type of fossil found, as is typical with cingulates generally. The two most common types of osteoderms recovered are the hexagonal elements that comprise most of the shoulder (pectoral) and pelvic regions of the carapace, the so-called buckler or immovable osteoderms (Fig. 2A), and the elongate rectangular elements from the movable bands (Fig. 2B), the imbricating or movable osteoderms (Holmes and Simpson, 1931; Hill, 2006). A partial articulated shell (Fig. 3) appears to have only seven or eight movable bands, although detailed study of this crushed specimen is needed to confirm this.

Like Dasypus novemcinctus, Dasypus bellus has small, simple, peg-like teeth (Fig. 4). The more posterior teeth have two flat wear surfaces that meet at a shallow angle, while the more anterior teeth have a single, slanted wear surface. The diet is thought to be similar to the modern species, largely invertebrate animals, but the larger size of the fossil species may have allowed successful capture of small vertebrate animals, such as lizards and ground birds. The skull is fragile and rarely preserves intact. The specimen shown in Figure 5 is the rare exception. 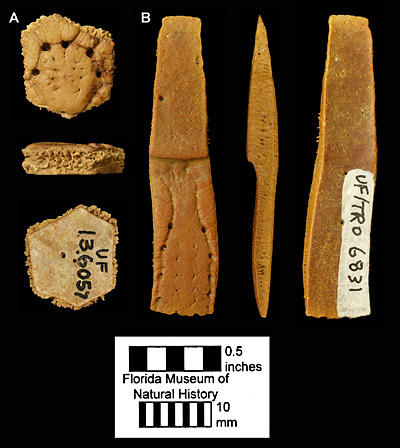 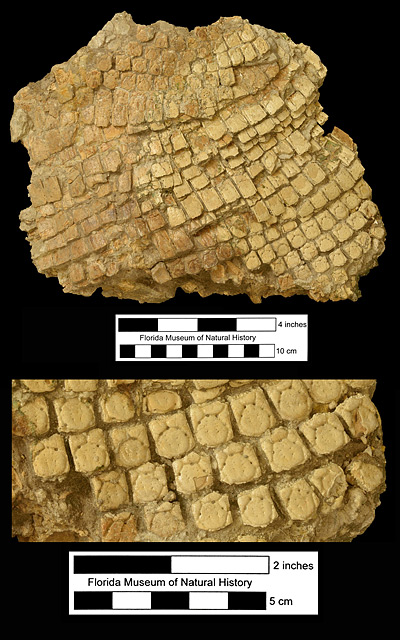 Figure 3. UF 61906, partial articulated carapace of Dasypus bellus from the Shell Materials Pit, Hillsborough County, Florida; early Pleistocene. This is the only known large section of a carapace of this species found articulated in Florida. The top image shows the entire specimen in dorsal view, while below is a close-up view of the pelvic buckler region. 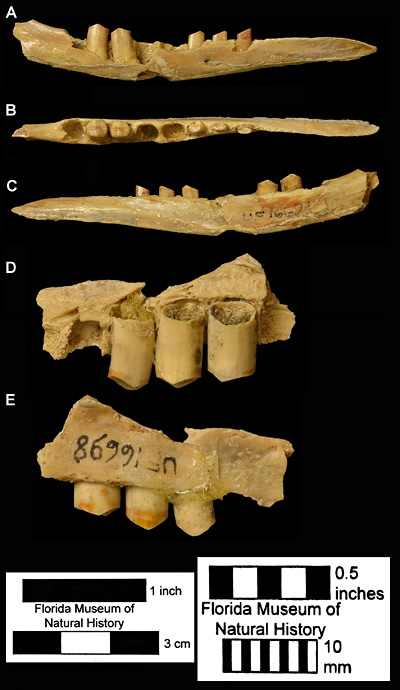 Figure 4. UF 16698, associated right mandible and partial maxilla of Dasypus bellus from Haile 15A, Alachua County, Florida. A, lateral; B, dorsal; and C, medial (lingual) views of the mandible. D, medial (lingual); and E, lateral (buccal) views of the partial maxilla. Note the short, peg-like teeth. Left scale bar is for the mandible (A-C), while the right scale bar is for the maxilla. 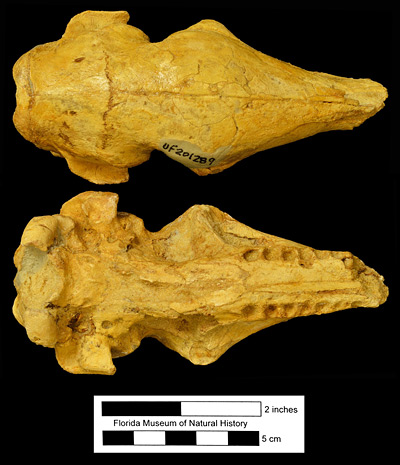 Figure 5. UF 201289, nearly complete skull of Dasypus bellus from Inglis 2A, Citrus County, Florida; early Pleistocene. Above, dorsal view; below, ventral view. This is the most complete skull known for the species. 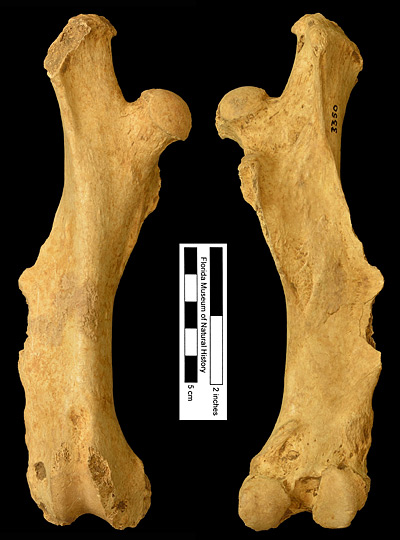 There is a modest trend for increase in average size from the late Pliocene through the middle Pleistocene for Dasypus bellus (McDonald, 2005), although much less than in some other contemporaneous genera of xenarthrans (notably Holmesina, Megalonyx, and Paramylodon). Because of the apparent small amount of evolutionary change in Dasypus bellus, it is not a valuable species for biochronology.

Auffenberg, W. 1957. A note on an unusually complete specimen of Dasypus bellus(Simpson) from Florida. Quarterly Journal Florida Academy of Sciences, 20(4):233-237.