Gallery of Rancholabrean Fossils from Florida 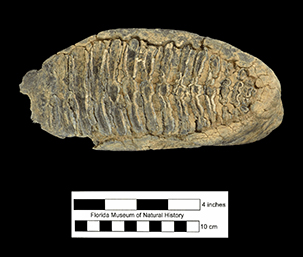 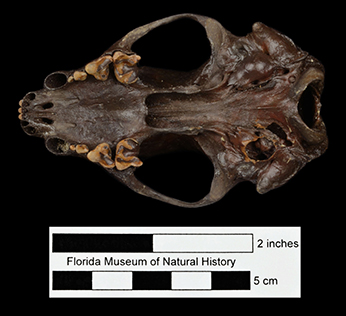 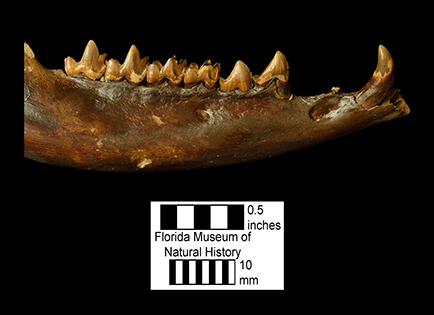 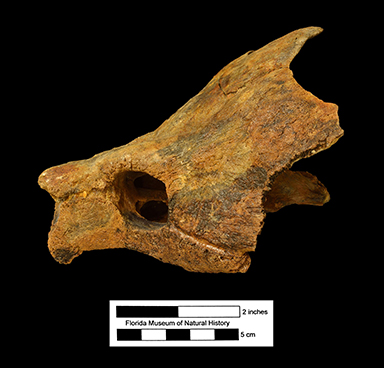 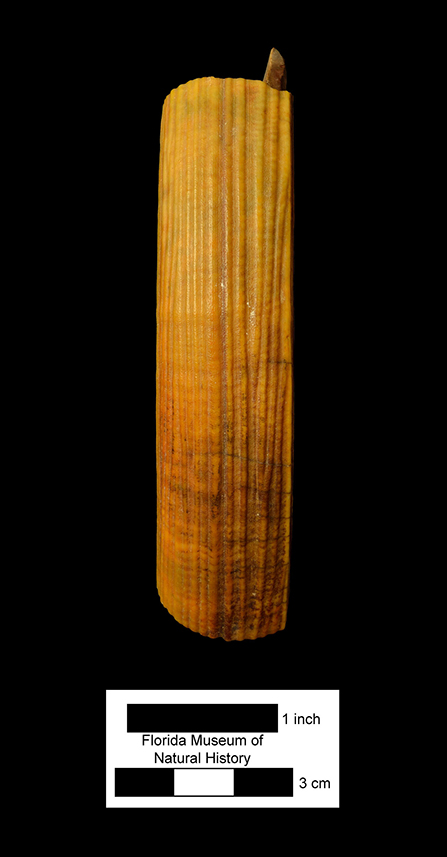 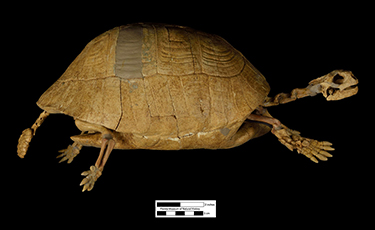 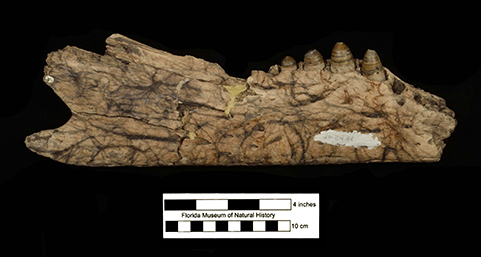 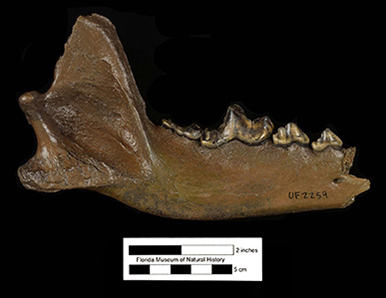 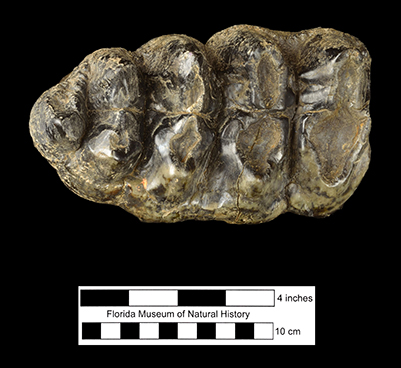 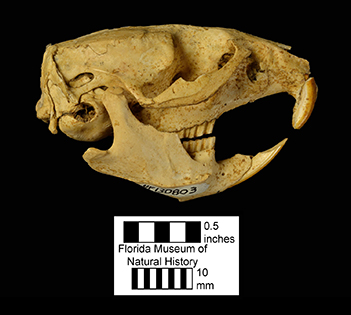 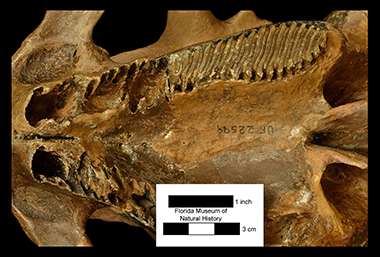 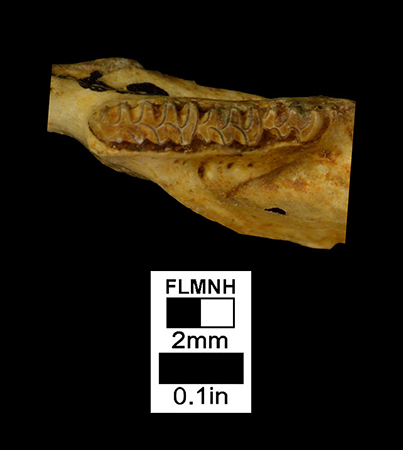 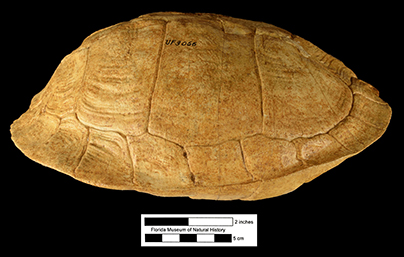 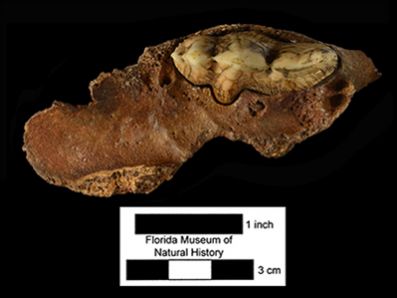 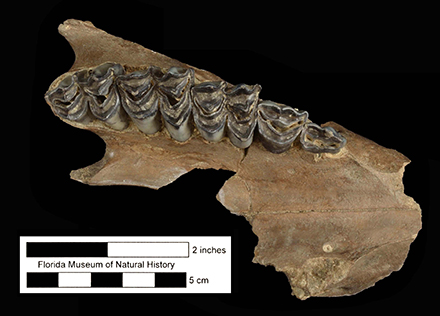 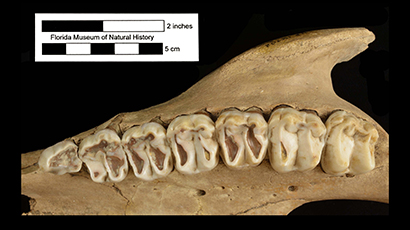 Major extinctions: There is a well-known mass extinction event at the end of the Rancholabrean. It mostly effected large mammals across the entire continent, but small mammals, amphibians, reptiles, and birds also became extinct at this time. The cause(s) of this extinction event have been the center of a long and sometimes colorful debate within the scientific community. The two major competing hypotheses are rapid climate change and human hunting, although an asteroid/comet impact and exotic diseases have their proponents.

The following small mammals known from Florida fossils became extinct during or at the end of the late Rancholabrean: the dwarf rabbit Sylvilagus palustrellus, the chipmunk Tamias aristus, the bog lemming Synaptomys australis, the pocket gopher Thomomys orientalis, the mustached bat Pteronotus pistinus, and the vampire bat Desmodus stocki.

There were also numerous species that disappeared from Florida at or near the end of the Rancholabrean, but survived elsewhere (with some even re-entering the region at a later date). Examples of these include the jaguar Panthera onca, the panther Puma concolor, the ocelot Leopardus pardalis, the jackrabbit Lepus sp., the ground squirrel Spermophilus sp., the muskrat Ondatra zibethicus, the porcupine Erethizon dorsatum, the bonneted bat Eumops underwoodi, hog-nosed skunk Conepatus leuconotus, the trumpeter swan Cygnus buccinator, the heath hen Tympanuchus cupido, the ruffed grouse Bonasa umbellus, the Manx shearwater Puffinus puffinus, the northern jacana Jacana spinosa, and the condor Gymnogyps californianus.

Comments: Florida has over 500 Rancholabrean vertebrate fossils sites that range across the state (Table 1). Because sea level was uniformly lower than what it is today through the late Rancholabrean (Ra2), often greatly so, there are no marine sites from this interval in Florida. Some Florida Ra2 sites do contain marine fossils, but these are reworked from older deposits. Most Ra2 vertebrate fossils found in Florida come from four types of localities:

1. From the beds and banks of many rivers and spring runs.

2. From sediments filling caves and sinkholes.

3. From stream, lake, and marsh deposits found in coastal regions on both the Atlantic and Gulf sides of the peninsula..

4. From beaches in both the Amelia Island-Jacksonville-St. Augustine area on the Atlantic coast and from Clearwater south to Venice on the Gulf side. These are usually specimens eroded out of off-shore deposits during storms or excavated during dredging, and then washed up on the modern beach.

The early Rancholabrean (Ra1) interval includes two major interglacial periods, corresponding to Marine Isotope Stages (MIS) 5 and 7 at around 125 and 225 thousand year ago. Sea level was higher than present during some portions of MIS 5, producing marine deposits that are currently above or at modern sea level along the Atlantic coast of Florida. These contain some marine vertebrate fossils. Examples of these include the Wilson Quarry, Dickerson Coquina Pit and the Daytona Beach Bone Bed.

The presence of Bison at a Florida fossil site is a clear indicator of a Rancholabrean age. Bison are fairly common, and found at most Rancholabrean sites that produce large mammals. TBut absence of Bison is by itself not definitive evidence of that a site is not Rancholabrean, as this could be the result of taphonomic or ecologic factors, or simply chance if there not many specimens. Another possible cause of confusion is bones and teeth of domestic cattle, which can be misidentified as fossils of Bison unless careful comparisons are made.

It is not always easy to determine if a Florida site or locality belongs in the Ra1 or the Ra2, particularly if the number of species is relatively low and/or preservation is poor such that species-level identifications cannot be made for many taxa. Formerly, it was thought that Bison latifrons was limited to the Ra1 and Bison antiquus to the Ra2 (Robertson, 1974; Morgan and Hulbert, 1995, Hulbert, 2001). But it is now known that Bison latifrons persisted into the late Ra2 in the southeastern United States (Patterson et al., 2012), so its presence cannot distinguish between the two. This accounts for reassigning Haile 8A and the Bradenton sites to the younger, Ra2 age (formerly Ra1 in Morgan and Hulbert, 1995; Hulbert, 2001). Bison antiquus does still appear to be limited to the Ra2. Ra1 faunas can be recognized by the presence of the extinct rodent species Microtus hibbardi and Sigmodon bakeri, instead of Microtus pinetorum and Sigmodon hispidus that are found in Ra2 and Holocene faunas. But the differences between these species are subtle and require detailed study to identify correctly. If these species are lacking, Ra1 vertebrate faunas in Florida are usually recognized if they are found associated with or stratigraphically below MIS 5 or MIS 7 marine deposits.

Patterson, D. B., A. J. Mead, and R. A. Bahn. 2012. New skeletal remains of Mammuthus columbi from Glynn County, Georgia with notes on their historical and paleoecological significance. Southeastern Naturalist 11(2):163-172