Canis dirus, the dire wolf, had an estimated mass of 130 to 150 pounds, which made it about 25% heavier than the modern gray wolf (Canis lupus). But smaller than the fictional dire wolves of the TV series Game of Thrones!

The largest known dire wolf specimens were found in the Aucilla River region of north Florida.

Dire wolves had relatively shorter limbs and were stockier than most other wolves. While this means that they were poorer runners compared to modern wolves or coyotes, they would still have been active pursuit predators.

Source of Species Name: from the Latin word dirus, meaning “fearful” or “ominous”.

Earliest records are from the middle Pleistocene (late Irvingtonian) of Nebraska and California (Tedford et al., 2009). Extensively distributed in North America in the late-middle and late Pleistocene (Rancholabrean), ranging north-south from southern Canada to southern Mexico, and east-west from the Atlantic coast to the Pacific. Also known from Venezuela, Ecuador, Bolivia, and Peru in South America (Dundas, 1999; Tedford et al., 2009). The type locality is from the Ohio River, near Evansville, Vanderburgh County, Indiana (Nowak, 1979); its age is assumed to be late Pleistocene.

Canis dirus, the dire wolf, is the largest species in the genusCanis, with an estimated mass of 130 to 150 pounds (60-70 kg) (Anyonge and Roman, 2006; Wang et al., 2008). This is about 25% heavier than the modern gray wolf, Canis lupus. Overall, compared to most other extinct and extant members of Canis, the dire wolf had a larger body size, a wider and taller skull with a great sagittal crest and extension in the back (posterior) of the skull, a thickening of the mandible below the carnassial teeth (upper fourth premolar and lower first molar), and the carnassials were slightly larger and more massive (Kurtén, 1984; Anyonge and Baker, 2006). These features gave the dire wolf larger and more powerful jaw muscles, which enabled it to be quite efficient at capturing and killing prey. Also, dire wolves had shorter limbs relative to body mass and would have been stockier than most other wolves. While this means that they were poorer runners compared to modern wolves or coyotes, they would still have been active pursuit predators, and not limited to ambush-style attacks. Like most dogs and wolves, Canis dirus undoubtedly chewed and gnawed on bones. But it lacks the specialized bone-crushing adaptations found in the skulls and teeth of hyenas and Borophagus (Anyonge and Baker, 2006).

In 1854, a partial left maxilla of a large wolf was discovered in the bed of the Ohio River near Evansville, Indiana in association with other extinct Pleistocene species such as Megalonyx jeffersoni and Equus complicatus. The state geologist of Indiana, Joseph G. Norwood, sent the specimen to Joseph Leidy (1823-1891), the preeminent vertebrate paleontologist in North America at the time. Leidy recognized it as a new species and originally named it Canis primaevus. However, that species name was previously used for a species of dhole, a modern canid from Southeast Asia (Cohen, 1978). So in 1858 Leidy gave the fossil from Indiana the much more appropriate replacement name Canis dirus. As additional fossils of large Pleistocene wolves were found in North America in the late 1800s and early 1900s, some were given “regional” names, such as Canis indianensis and Canis mississippiensis. These are now regarded as junior synonyms of Canis dirus (Kurtén, 1984). 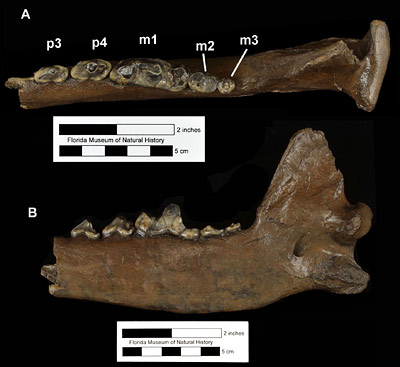 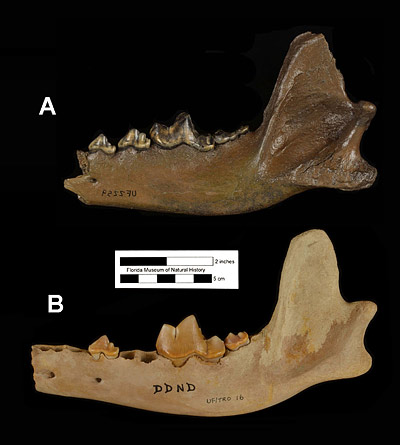 Figure 5. Lateral views of two mandibles of Canis dirus from the late Pleistocene of Florida. A, UF 2259, right partial mandible with p3-m3 of Canis dirus from Bradenton 51st Street site, Manatee County. B, UF/TRO 16, left mandible with p3, m1-m2 from Devils Den, Levy County. The specimen in A has been digitally flipped so it appears to be from the left side, allowing better comparison between the two specimens. UF/TRO 16 is a subadult individual with unworn teeth, while UF 2259 is a older adult with well worn teeth. Note the deepened ramus and added muscle scars that form as the animal matures.

The evolutionary origin of Canis dirus has been a point of contention, with some authors even favoring a South American ancestry followed by a back dispersal to North America. The proposed South American ancestor, Canis nehringi, is pheneticly similar to Canis dirus (Nowak, 1979; Dundas, 1999). The recent review of Tedford et al. (2009) favors a simpler answer, with derivation from a smaller species of wolf from the early to middle Pleistocene of North America, Canis armbrusteri. The latter itself dispersed from Asia in the early Pleistocene.

The largest known sample of Canis dirus specimens is from the Rancho La Brea tar pits in Los Angeles, California, with over 1,600 known individuals. These tar pits are famous for trapping and preserving an abundance of fossils, especially carnivores and scavengers. Likewise, the Talara tar pits of Peru produced the largest sample of the species in South America. Unfortunately, no such deposits are known from Florida. The locality in Florida providing the greatest numbers of dire wolves is the Cutler Hammock Site in Dade County. It contained fossils representing a minimum of 42 individuals ranging from young pups to old adults and is thought to have been a dire wolf den (Emslie and Morgan, 1995). Another important area in Florida for Canis dirus is the Aucilla River in Jefferson and Taylor counties. According to Gillette (1979), the largest known dire wolves specimens have been recovered from this region.

Canis dirus displays only minor sexual dimorphism and most likely lived in social groups, in packs, much like modern gray wolves. This would also indicate monogamy, which is common among members of the Canidae (Wang et al., 2008). Studies on large predators in modern Africa reveal intense, sometimes deadly, competition for carcasses and territory between large carnivores. Hunting in packs would have allowed dire wolves to successfully kill larger prey than could a single individual. Pack behavior would also be important to protect carcasses from larger predators of the late Pleistocene, such as bears (Arctodus, Tremarctos) and the great cats (Smildon fatalis, Panthera atrox), and allowed them to take prey carcasses away from more solitary predators such as jaguars. The Cutler Site may give some insight into the preferred diet of Canis dirus, as it contains numerous bones, often fragmented, and isolated teeth of peccaries and horse. The latter were mostly young juveniles. It is possible that larger prey were consumed at the kill site, so only these relatively smaller items were brought back to the den.

In addition to large bears and great cats, Canis dirus also faced competition from other large, predacious members of the canid family. Three canid lineages dispersed from Asia into North America during the middle to late Pleistocene. The genus Xenocyon is widely distributed in the Pleistocene of the Old World and a close relative of the modern African hunting dog Lycaon pictus and the dhole Cuon alpinus (Martinez-Navarro and Rook, 2003; Tedford et al., 2009). Its fossils are very rare in North America, and it is not known south of the Texas panhandle. The dhole also dispersed into North America, but its fossils are only known from one locality in New Mexico (Tedford et al., 2009). The third disperser from Asia is the gray wolf, Canis lupus. According to Tedford et al. (2009), it first appears in Alaska and the Yukon in the middle Pleistocene, but does not disperse into lower latitudes until the late Pleistocene. Tedford et al. (2009) referred all middle Pleistocene records of Canis lupus from Nebraska to other species of Canis. Most fossil records of Canis lupus are from western North America, overlapping its historic range, and it is not known from Florida. Whether because of direct competition with Canis dirus or other reasons, neither Xenocyon nor Cuon persisted long in North America, nor were they ever common. Likewise, the gray wolf did not become common until after the extinction of Canis dirus at the end of the Pleistocene.

The main sources of prey for dire wolves were Pleistocene megafauna (peccaries, horse, llama, bison, tapir, sloths, glyptodonts, etc.). At the end of the Pleistocene, most these species became extinct. At this time, about 11,000 years ago, Canis dirus and Canis lupus were co-existing in the west, while Canis dirus and the red wolf Canis rufus lived together in the east (Dundas, 1999; Nowak, 2002). Canis dirus had previously been the more abundant large canid across the continent. But it was its smaller, quicker relatives that survived the terminal Pleistocene extinction event.