This large aquatic rodent is a relative of voles and lemmings.

Although today restricted to Florida and southern Georgia, in the Pleistocene the species lived as far north as South Carolina and possibly West Virginia.

Source of Species Name: This species was named after Professor J. A. Allen, a prominent zoologist and friend of Frederick W. True, curator of mammology at the then U.S. National Museum, who originally named this species.

Currently, the round-tailed muskrat is found in much of peninsular Florida and in southeastern Georgia (Birkenholz, 1972). Fossils of Neofiber alleni have been identified from many localities in Florida, as well as from the Ladds Cave, northwestern Georgia (Frazier, 1977), the Isle of Hope Site in coastal Georgia (Hulbert and Pratt, 1998), two localities in coastal South Carolina (Saunders, 2002), and possibly Trout Cave in West Virginia (Grady and Garton, 2000). The type locality of this species is Georgiana, Brevard County, Florida (True, 1884b).

Rodentia is an order of mammals comprising a large diversity of animals such as rats, mice, squirrels, capybaras, porcupines, and beavers. Neofiber alleni is an extant species of rodent commonly known as the round-tailed muskrat or the Florida water rat. Generally, the Florida water rat is a brown-furred, semi-aquatic inhabitant of wet enivornments rich in vegetation such as swamps and marshes, where it feeds on aquatic grasses. Unlike the muskrat Ondatra zibethicus, which has a flattened tail, the Florida water rat has a tail that is round in cross-section. It is approximately 26 cm (10.2 in) to 38 cm (15.0 in) long from the tip of the nose to the tail, and is intermediate in size between the muskrat and the meadow vole, Microtus pennsylvnicus (Meade, 1952; Birkenholz, 1972; Frazier, 1977). More information about the extant species can be found here.

Neofiber alleni is closely related to Ondatra zibethicus, and the two species are considered to be more closely related to each other than to any other living species. They belong to a subfamily of rodents known as Avricolinae which comprises of some 30 genera and 150 species commonly called voles, lemmings, and muskrats (Robovsky et al., 2007). 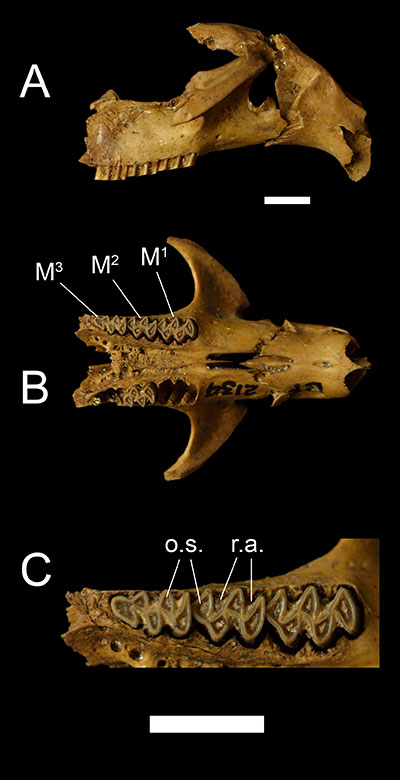 Figure 3. UF 2139, a partial cranium of Neofiber alleni in A) right lateral and B) occlusal views, and C) a close-up of the dentition in occlusal view. Scale = 5mm. Dental abbreviations as in Figure 2; o.s. = the triangular occluding surfaces of the tooth; r.a. = reentrant angles or folds in the tooth.

The genus Neofiber first appears in the fossil record in the middle Pleistocene of North America in the form of the extinct Leonard’s muskrat, Neofiber leonardi (Hibbard, 1943; Frazier, 1977). Neofiber leonardi is known from fossils in Texas, the Great Plains, Virginia, and Florida (Frazier, 1977; Kasper, 1992). The oldest fossils of Neofiber alleni are from the late Irvingtonian Coleman 2A locality in Sumter County, Florida (Matin, 1974). Based on the similarity and overlapping degrees of variation in the morphology of the teeth through time, it is thought that Neofiber alleni evolved from Neofiber leonardi sometime in the middle Pleistocene (Frazier, 1977; Kasper, 1992). Currently, Neofiber is restricted to Florida and southeastern Georgia, possibly due to their reliance on warm aquatic habitats (Frazier, 1977). But its range was much wider in the Pleistocene.