Invasive species are one of the main global drivers of biodiversity loss and pose a threat to our natural ecosystems, public health and native wildlife. Florida’s climate and central location as a transportation hub for both goods and tourism makes it a hot spot for invasive species. Raising awareness about invasive species is the first step in fighting this problem.

That’s why grant recipients at the University of Florida Thompson Earth Systems Institute are using ants to educate younger generations about invasive species. This is because ants offer a window into the scale of the invasive species problem — Florida hosts 12 of the worst invasive ant species worldwide.  As a bonus, ants are easy to study.

Marina Ascunce, a researcher for the UF Institute of Food and Agricultural Science and her undergraduate students Jenna Allen, Patricia Perez and Sara Zollota, have been conducting research on the impact of invasive ants on native ant communities for about two years. But, they wanted a way to convey their research to the public. To do so, they developed a program targeted at elementary school kids titled, “The ImportANTS of Ants.”

Funded by the TESI, the project aims to improve awareness about the negative impacts of invasive species and create an appreciation for ants and natural ecosystems.

The lesson plan includes both an in-person visit to a biological research station and a set of inquiry-based, hands-on learning activities about ants, social insects and invasive species.

“We chose ants because they are everywhere,” said Allen. “Ants ignite a sense of curiosity in kids.”

That’s no surprise. Ants move an estimated 50 tons of soil per year in one square mile, equal to the weight of 25 elephants.

For the pilot program, the team first visited 5th graders at Melrose Elementary School.  Melrose, a rural area outside of Gainesville, is situated near the UF Ordway-Swisher Biological Station where the team is conducting research as part of a UF/IFAS initiative called the Interdisciplinary Research on Invasive Species, or IRIS.

The first stop during the ImportANTs of Ants program was a trip to OSBS. During the field trip, kids observed prescribed burn sites and learned how the use of controlled fire can restore natural ecosystems in Florida and can also help control of invasive species.

During the tour of the station, some of the parents tagged along and mentioned that although they lived in Melrose their whole life, this was their first time visiting the Biological Station.

“I was touched by that and ignited in me the will of doing more to bring the public to those beautiful restored ecosystems” Ascunce said. “They were very grateful for the opportunity and were inspired to learn more.”

When the students returned to the classroom, they constructed their own ants out of household materials, learning about the anatomy of an ant and ant colony life.  Although discussed during the lesson, but not as part of the intended ant model, some students took their own initiative to include stingers on their ant models. Others added wings to represent female or male ants.

“We were impressed to see the young children add these anatomical features to their models based purely on their prior examination of the ants we brought for them to observe and the morphology handouts depicting body parts and appendages on the ants,” Zollota said.

The team concluded the lesson with surprise living ant colonies from several species of native ants: the Florida carpenter ant (Camponotus floridanus), pyramid ant (Dorymyrmex bureni), and fungus-gardening ant (Trachymyrmex septentrionalis). The team also brought one invasive ant species, the obscure big-headed ant (Pheidole obscurithorax). This way, they could better tell the difference between native and invasive ants they may come across.

“I didn’t know that fire ants were an invasive species,” one student told the researchers.

“What can we do to protect native ant species?” asked another. “Are 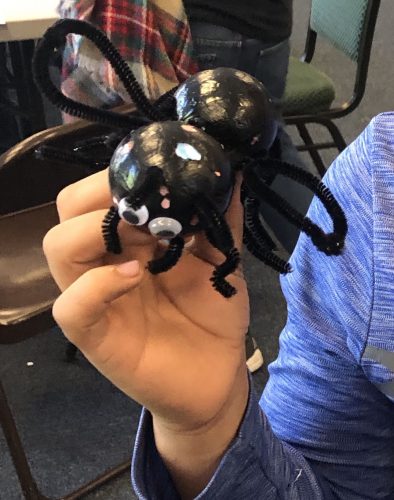 humans an invasive species?” chimed in another.

Environmental education programs like this one, help incite a two-way learning conversation between students and researchers, said Perez.

“During the activities, we were inundated with questions, even some that stumped us as researchers,” said Perez. “During one activity, some students kept asking about a ‘bull ant. We weren’t familiar with that species, but later found out it was a type of wasp.”

Allen says that this education program can also increase responsible behavior in nature, knowledge of scientific concerns and environmental vulnerability.  Working with other K-12 educators across the state, the team is taking The ImportANTS of Ants on the road to other schools.

“This is an effective educational program because it can help people realize at a young age how their own behavior could impact our environment.  By teaching these lessons to the kids, we are also reaching older generations through the interactions of the kids with other family members, creating a channel of communication about these issues through the kids own perspective,” said Ascunce.

“We believe this program has the potential to reach many more kids and families and we are excited to bring it into other classrooms around Florida.”

For more information on the project, contact Marina Ascunce at ascunce@ufl.edu.

To read about all of the 2018 TESI grant recipients, visit: https://www.floridamuseum.ufl.edu/earth-systems/blog/announcing-the-2018-ties-grant-recipients/

These individuals provided support to our team wholeheartedly, especially 5th grade teacher Ms. Bethany Parker, who graciously accepted this challenge and we thank her greatly for that, and Melrose Elementary principal Ms. Leah Lundy, who supported the initiative.

A big thanks goes to Andrew Rappe, Assistant Director of Ordway-Swisher Biological Station, for coordinating and leading the tour of the station with the students. He was amazing at explaining how the use of controlled fire can restore natural ecosystems in Florida. He also sparked students’ interest on how to become a member of the OSBS team. The ant colonies were built and taken care of by Andrew Nisip, a member of the IRIS team with an affiliation at the USDA-ARS-CMAVE Fire Ant Unit. Finally, this could not have been done without the support of UF Thompson Earth Systems Institute. We greatly appreciate your trust in the program, and we hope to teach as many kids as we can about the ImportANTS of Ants.