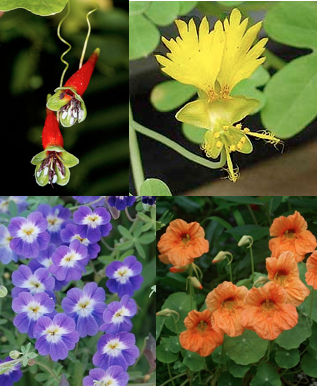 Congratulations to Lauren Gonzalez who was recently awarded a Graduate Student Research Award from the Society of Systematic Biologists for her proposal titled “Elucidating the Evolutionary History of Tropaeolum (Tropaeolaceae): Implications for Historical Biogeography, Trait Evolution, and Conservation”

Tropaeolum (Tropaeolaceae) comprises ~ 90 species native to Central and South America that are distributed throughout the Andes, within a variety of different habitat types, including several biodiversity hotspots. They also show great variation in floral morphology (e.g. color, shape, size) and some species have been important cultivars around the world.  Because of its distribution and diversity, this genus represents an ideal system to study how geological and environmental processes have affected plant evolution in South America. The goals of this study are to resolve the phylogeny of Tropaeolum using a next-generation sequencing approach and subsequently explore biogeography, trait evolution, and conservation status.