The Florida Archaeological Collections at the Florida Museum of Natural History span more than 100 years of investigations in Florida. While the Anthropology Department within the museum wasn’t founded until 1952, the collections and records include materials from earlier expeditions and programs within the state and broader Southeastern U.S.  Collections continue to grow via active excavations by museum curators, graduate students, and associated researchers. 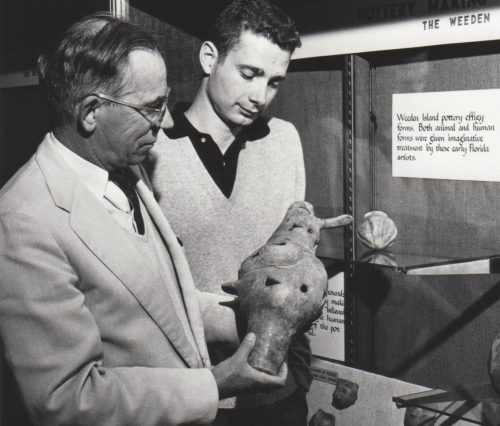 In 1955, William H. Sears joined the Bullens, serving as curator in archaeology. During his tenure at the then Florida State Museum, Sears worked at many sites conducting surveys as well as directing field schools around the state including Melton Mound, McCormack, Maximo Point, Terra Ceia, Bayshore Homes, Bluffton, Tucker as well as Fort Center.  The Museum holds field notes, photograph archives and other site related documents from many of his Florida excavations during the 1950s to 1970s.

In the early 1970s and into the early 1980s, the archaeological collections and archival materials stored in the University of Florida’s Department of Anthropology were transferred to the museum. Those extensive materials encompass a host of Florida archaeological sites investigated and/or recorded by John M. Goggin, who worked in Florida from the late 1930s until his death. Most of Goggin’s field notes from those sites are housed in the University of Florida’s P.K. Yonge Library of Florida History. However, some correspondence and research notes are in the Florida Museum.

Charles H. Fairbanks served as the Chair of the Anthropology department at the University of Florida from 1963-1983 and conducted archaeological research across Florida and Georgia. After his death in 1984, his personal papers and field notes were transferred to the museum archive from the Anthropology department at UF. His prehistoric and historic ceramic type collections (initiated by John Goggin) are now housed in the Ceramic Technology Laboratory and Historical Archaeology collections at the Florida Museum.  These collections include material from archaeological sites that were excavated by Fairbanks and Milanich and their students on St. Simons Island, Georgia. The St. Simons Island collections span the pre-Columbian, Early Colonial, and Plantation periods and overlap with the Historical Archaeology collections at the Florida Museum.  Around this same period and into the In the late 1980s the records and collections from the extensive King’s Bay archaeological project in southeastern Georgia also became part of the Florida Museum’s holdings. That project involved the survey and/or excavation of a number of pre-Columbian and Plantation period sites, undertaken by William Adams and other archaeologists and students working through the University of Florida and the Museum.

Over 30 years as curator, Jerald T. Milanich, (1972-2004) saw the expansion of the collections, growth of the department,  and development of the discipline. Working with and training students, Milanich and his colleagues initiated numerous excavations at dozens of Florida archaeological sites. During the late 1970s Milanich directed six fieldwork expeditions at the McKeithen site in north central Florida. These excavations yielded important information about village life and mortuary practices during the Weeden Island period in north Florida.

The discovery of the Baptizing Spring site (Mission San Juan de Guacara) in 1976 was the beginning of the resurgence of archaeological research at Spanish missions by Milanich and his students. Excavations at the mission sites on Amelia Island followed in the mid-1980s. At the same time there was a growing interest in reconstructing Hernando de Soto’s route through the southeastern U.S. Efforts by Milanich to trace Soto in Florida resulted in the placement of historical markers along his route. The Tatham Mound site was identified during archaeological surveys along the Withlacoochee River. Tatham Mound would prove to be associated with Soto’s entrada and provide a rare glimpse into Spanish and Indian interactions. Florida Museum archaeologists also searched northern central Florida for Soto era sites which resulted in the discovery of several Spanish mission sites. Survey efforts located the mission complex at Fig Springs (San Martín de Ayacuto) which led to several field seasons of excavations at the site. Other missions (Santa Fe and Indian Pond sites) were identified and would see further work during the 1990s.

Between 1983 and 2000, David Webb, Curator for the Florida Museum Vertebrate Paleontology department, conducted research on submerged localities in the Aucilla River under the auspices of the Aucilla River Prehistory Project (ARPP). These sites yielded evidence of human, animal, and plant life spanning the past 30,000 years. In 2003 the ARPP collections were transferred to the Florida Archaeology collections to be curated with the rest of the archaeological material from Florida.

Other anthropological curators in the Florida Museum specializing in Florida archaeology have been: E. Thomas Hemmings, Jerald T. Milanich, Kathleen A. Deagan, Brenda J. Sigler-Eisenberg, and William H. Marquardt, and, in more recent years Neill J. Wallis, Charles Cobb, and Michelle LeFebvre. Wallis’ work focuses most closely on sites in north central Florida revisiting legacy sites (e.g., Garden Patch) and working at new sites (e.g., Parnell, Seven Sisters and Pine Landing). Collections, field and laboratory notes, and archival materials generated by the research projects undertaken or supervised by these curators during their tenure are curated at the Florida Museum. The bulk of the materials focus on pre-Columbian and Colonial period archaeology of Florida. These legacy holdings are the basis for current research and baseline information for new and continuing research initiatives. Several collections from archaeological sites along the Georgia coast are included in these collections.

In addition to the above, the department curates collections, field notes, reports, and other information relevant to site investigations carried out by graduate students working under the auspices of the Florida Museum and University of Florida archaeologists. Such student-generated collections and archival materials continue to result from archaeological field schools, cultural resource management projects, and thesis and dissertation research projects.