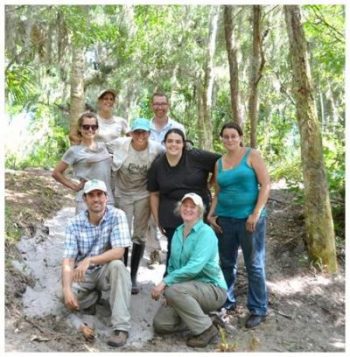 The Excavated Collections include all archaeological materials that have been excavated using systematic recovery techniques. These collections include material collected by Florida Museum archaeologists and graduate students during site surveys, small-scale testing, and large-scale excavations.

While recovery techniques vary depending on the project, site, and supervising archaeologist, all of these collections have associated provenience data. Documentation such as field notes, maps, and photographs are often available with the collection.

Below is a select list of sites in the Florida Archaeology Collections.

Abraham’s Old Town is a multicomponent site in Sumter County. The site’s significance is its identification as Pilaklikaha, a town inhabited by Black Seminole Indians during the early 1800s. It was excavated by Terrance Weik 1998-2001. The collection includes lithics, ceramics (both European and Seminole), glass beads, trade pipe fragments, bottle glass, brick, cut nails, and other metal fragments  Some evidence of pre-Columbian occupation was also present. Learn more

Bolen Bluff is a multicomponent site located south of Paynes Prairie. The site was excavated by Ripley Bullen in 1949. Large portions of the site were destroyed and used for fill during highway construction. The collections include numerous stone points and tools including: Suwannee, Bolen, Arredondo, and Pinellas points, as well as stone adzes, hoes, drills, and scrapers. Pottery types span the entire range of ceramic periods in the area: Orange, Transitional, Deptford, Weeden Island, St. Johns, and Alachua. Learn more

This Gulf coast site in Dixie County is listed on the National Register of Historic Places and was first excavated by Florida Museum archaeologists almost fifty years ago.  These Museum holdings have formed the basis for new research and excavations supervised by Neill Wallis, Paulette McFadden, Hayley Singleton and others, beginning in 2012. The Woodland period site was occupied multiple times in the past from ca. 1000 BC to AD 1000, spanning the Deptford, Swift Creek and Weeden Island archaeological cultures. New excavations have focused on better understanding the chronology of monument construction and village occupation at this seven-mound civic-ceremonial center. The collections come from rich deposits of Woodland period artifacts along with faunal and plant remains resulting from a variety of site activities, including daily activities and special events. Learn more

The McKeithen Site is a Weeden Island (AD 200-900) site in Columbia County excavated during the late 1970s under the direction of Jerry Milanich. The site is composed of a village area and three mounds. The collections from the site include an excellent variety of Weeden Island ceramics, including numerous whole or almost whole vessels from different areas of the site. The collections also include a variety of stone points and tools, grinding stones, mica, and some faunal and floral remains. Learn more

This Mississippian period site was once a waterfront property on a now drained pond in north-central Florida.  Excavations under the direction of Neill Wallis revealed dense and discrete clusters of artifacts and floral and faunal remains in a rapidly filled pit at an otherwise sparsely occupied site. Artifacts included over 4500 pottery sherds and upwards of 10,000 animal bones from what is described as a roasting hearth and burial pit for a large feast.  This unique site reveals new insights about pre-Columbian settlement patterns and evidence for large-scale feasting in small-scale foraging societies.  Learn more

The Richardson Site is a Potano Indian village near Orange Lake that dates from the late pre-Columbian and early Spanish mission period. The site provides us with valuable information on Potano houses and early Spanish missionization. Collections include a large assemblage of Alachua series pottery, lithics, glass beads, wrought nails, and faunal material. Learn more

Tatham Mound is a Safety Harbor mound located near the Withlacochee River in Citrus County. The site was also in use at the time of the de Soto entrada as evidenced by numerous Spanish artifacts dating to to mid-1500s. The collections include Safety Harbor ceramic vessels, Pinellas projectile points and other lithic tools, and many shell artifacts: gorgets, celts, dippers, and beads. Spanish artifacts include: metal beads and pendants, Nueva Cadiz and other glass beads, and metal artifacts including chisels, spikes, and armor fragments. Learn more