I didn’t know what to expect on my first trip to the dig site, considering how far it was from Gainesville and how deep into private property it was. I made it to the site on time. I thought the surrounding forest was very vast and provided a nice landscape. The cows were also a nice sight to see on the property. I was very much fascinated by how the site looked when I first saw it because it was my first time at any dig site, but it was how I envisioned it would be, with piles of dirt, flag markers, tarps, and of course, fossils.

The day started with Cindy giving me a basic rundown of the history of the site, from its origins to how the Florida museum and the university got the opportunity to work there. She also explained to me the tools that I was going to be using throughout my time at the site, from the specific bags and vials for any sample collected and the actual tools in order to dig through the sand or clay, such as the trowel and screwdriver.

I was then assigned a block of about 4 ft^3 that would be my task to dig through for the day. It was a block of mostly loose sand and sandstone on the western end of the site. It was at a strata much higher than what was common for fossils for the site, but I had no issue with it since it was my first time ever digging for fossils. The sand was easy to dig through, so I made many trips with my filled cat litter buckets to the dirt/sand dump areas to the north.

As far as actually finding fossils, there were some “objects” that I thought could be a fossil, or part of a fossil, but they were knocked out by other volunteers telling me that they were just deceiving pieces of rock. So in a nutshell, I did not find any fossils on my first day, but it seemed as though everyone around did, which was rather discouraging, but I was certain that I would be able to find something on one of my later dig days. On the bright side, I was able to level my block to the next level, so I did manage to accomplish something. 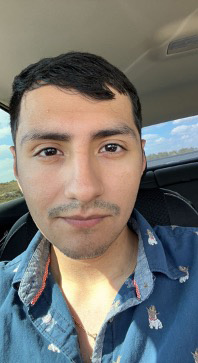 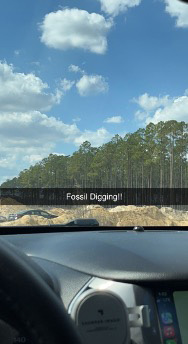 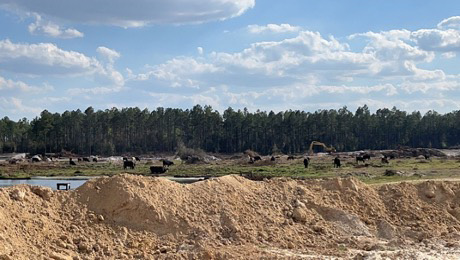 On my second day out to the dig site, I was assigned to dig at the eastern end of the site, in a section where the sandstone and clay were much harder and thus, required some more force in order to dig and probe through. I was told that the layer I was digging on had a good chance of having fossils. That was exciting to hear, but also rather nerve wracking because some of these fossils are very brittle and can easily break apart.

At first, I was not lucky in finding anything. About an hour into my dig, I spotted something out of the corner of my eye amongst the dirt that I was about to scoop with my hands into the bucket. To me, it looked like a shark’s tooth, but I also thought it was another deceiving piece of rock. I asked my professor for the class, Dr. Jon Bloch, for confirmation since he was nearby, and he confirmed that it was, in fact, a shark tooth. That was rather exciting to hear that I found my fossil, even if it is something that is common, such as a shark’s tooth. I placed it into a vial and got my first fossil label for my bone bag.

About mid-way through the day, my screwdriver struck a hard point that didn’t feel like sand or clay. So, by protocol, I began to dig around it to level the area and see what is under there. I was not sure what it was because it was rather large and flat, and slanted. Cindy told me that it could be part of a turtle’s shell. Unfortunately, the dig day was over before I could get much of a better view/determination of what it is. I covered the fossil in order to indicate that there may be a fossil there and to protect it from the elements. I am not sure of what became of it, as in whether it was actually a fossil that was jacketed or if it was just a strong piece of clay.

On my third day at the site, I was assigned back to the sandy section of the dig site, on the western end. This day was unique in that the dig site hosted a group of high school students that also helped out at the site. During my dig, I was unlucky in finding anything. However, it was nice to see all the high school students eager to find something during their digs, with some of them even asking me for assistance, whether in how they should dog for fossils or verifying if their findings were fossils or rock.

When I was heading towards the museum, I was rather nervous because I didn’t really know what to expect. Earlier in the semester, the class took a tour of Dickinson Hall in the Vertebrate Anatomy Lab, and we all got to see up close how the fossil jackets were further worked on in order to get the fossil itself, as well as the process of filtering the dirt for any possible microfossil.

At the exhibit, I was definitely impressed when I first walked because of how interesting the exhibit looked and some of the artifacts that were in there. The task that I was given for both days was sorting out fossils and cleaning and preparing them to be glued and taken out of the jacket.

On both days, I was working on separate specimens of soft shell turtles found at Montbrook. It was a great experience having  the opportunity to carefully unravel the fossil beneath the sand and clay. I was rather anxious over being too rough with the fossil and causing it to chip or shatter, but thankfully neither happened.

It was a good opportunity to interact with the community and help guide museum visitors any school children about the wonders of vertebrate paleontology and perhaps influencing them to take a greater interest in the field by explaining the steps of becoming a fossil, to the site of Montbrook itself, or the work that I was doing in the exhibit on those days.

My last day at Montbrook was very bittersweet due to the fact it was my last scheduled day there. I’ve been gone from the site for a couple weeks and rains have been flooding the area and so, my day started off with all the volunteers dumping water out of the tarps and over the dirt hill in order to begin excavating. My work included digging at the eastern end of the site, around where I had found my supposed turtle shell on my second day here. To my surprise, a huge limb was being worked on. At the time everyone believed it to be a gomphothere limb, but we’re still unsure. It seemed as though the whole skeleton was preserved for the animal, and I was digging above where the head of the creature could be.

Unfortunately, I found no such thing. Most of the day was taken up by trying to pry through a huge section of limestone with a rock hammer. On the bright side, I was able to see some cool invertebrate fossils that I decided to take as a keepsake for my time here (since we can’t take vertebrate fossil specimens). Another cool finding I was able to uncover were some fragments of what could be a gomphothere tusk. I’m not sure if it is part of the huge fossil uncovered near me, since it was found on a different stratum, but still cool nonetheless.