Bufo defensor has only been recovered from two fossil localities, both from the early Pleistocene of the Florida peninsula. But one of those, Inglis 1A, produced almost 700 fossil specimens of this species.

Bufo defensor looked similar to the modern Southern toad (Bufo terrestris or Anaxyrus terrestris), but it was larger and had a more substantial supraorbital crest.

Bufo defensor has only been recovered from central Florida. The type locality is Inglis 1A, a sinkhole that formed within the Eocene Inglis Formation, in Citrus County, Florida.

Bufo defensor has only been recovered from two fossil localities, both from the early Pleistocene of the Florida peninsula. The type locality, Inglis 1A, was uncovered in 1967 during excavations for the Cross Florida Barge Canal and is interpreted to be a sinkhole within the Eocene Inglis Formation. Using biostratigraphy, the site was dated to latest Blancan based on the presence of several mammalian species that are restricted to latest Blancan faunas (Klein, 1971; Hulbert, 2010). In 1974, a crew from the Florida Museum of Natural History screen-washed sediment from the Inglis 1A site and found may fossil anurans, along with other microfauna (Meylan, 2005). This site is particularly important for understanding the evolutionary history of anurans because it fills in a 7 million year gap between the early Miocene and late Pleistocene faunas from which fossil anurans were previously known (Meylan, 2005). Six frog taxa were recovered from Inglis 1A, which Meylan (2005) stated was an “essentially modern anuran fauna”, as five species were modern and Bufo defensor was the only extinct taxon. Meylan (2005) interpreted the sinkhole to be surrounded by a xeric, or dry, habitat based upon known adaptations in most of the frog species.

Bufo defensor was first listed as Bufo n. sp. in Hulbert (2001) before being formally described by Meylan in 2005. Meylan (2005) placed his new toad species in the genus Bufo. Some subsequent molecular studies (e.g., Frost et al., 2006; Pyron and Wiens, 2011) determined that Bufo was a paraphyletic clade, and that North American species formerly placed in that genus should instead be included in the genus Anaxyrus. Other studies by modern herpetologists favor retention of the North American toads in Bufo (e.g., Pauly et al., 2009). Given this uncertainty in how to resolve this issue among the living toads, traditional taxonomy is maintained here for now. Martín et al. (2012) formally proposed that Bufo defensor be reassigned to Anaxyrus, but without any examination of the fossils themselves. 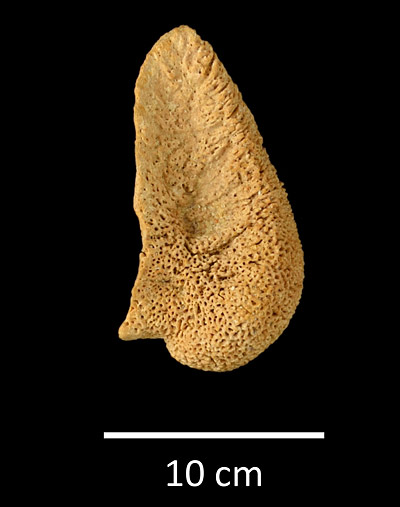 Figure 2. UF 222916, holotype of Bufo defensor from Inglis 1A, Citrus County. Right frontoparietal in dorsal view, anterior is towards the top of the page. Note the large supraorbital crest on the lateral (right) side, and the slightly concavity on the medial (left) side. 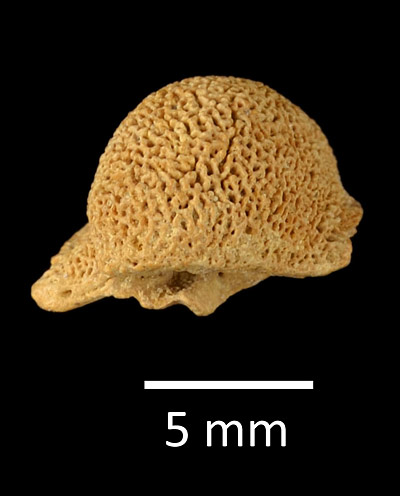 Figure 2. UF 222916, holotype of Bufo defensor from Inglis 1A, Citrus County. Right frontoparietal in dorsal view, anterior is towards the top of the page. Note the large supraorbital crest on the lateral (right) side, and the slightly concavity on the medial (left) side.

The holotype of Bufo defensor is a right frontoparietal (UF 222916), which is part of the top of the skull (Figs. 2-3). This element was chosen as the holotype because Tihen (1962) determined that this bone was the most useful for differentiating New World bufonids (Meylan, 2005). Bufo defensor is differentiated from all other members of its genus by the unusually large supraorbital crest on the frontoparietal, which becomes a large spherical protuberance posteriorly (Meylan, 2005). Meylan (2005) noted that Bufo defensor looks most similar to the modern Bufo terrestris (= Anaxyrus terrestris of Frost et al., 2006), but the larger supraorbital crest, as well as the overall larger size of Bufo defensor, differentiates the two species. The frontoparietals of the two species are similar in shape, in which the supraorbital crests increase in height posteriorly and end in a ball-like structure and the medial side of the frontoparietal is slightly concave. The ilia of Bufo defensor and Bufo terrestris are also similar in having a low ilial prominence with an anterior slope that ranges from much steeper than to subequal to the posterior slope. The ilium in Figure 4 shows a near subequal state between the anterior and posterior slopes of the ilial prominence.

Hulbert Jr., R. C. 2010. A new early Pleistocene tapir (Mammalia: Perissodactyla) from Florida, with a review of Blancan tapirs from the state. Bulletin of the Florida Museum of Natural History 49(3):67-126.(Download PDF)

Pyron, R. A., and J. J. Wiens. 2011. A large-scale phylogeny of Amphibia including over 2800 species, and a revised classification of extant frogs, salamanders, and caecilians. Molecular Phylogenetics and Evolution, 61(2): 543-583.