The Florida Museum of Natural History has over 550 specimens of this species in its collection, and has the only known mounted skeleton of the species on public display.

Amphicyon longiramus was the top carnivore in Florida 16 to 18 million years ago.

Its closest modern ecologic equivalent is the grizzly bear.

Source of Species Name: (longiramus is Latin for “long branch”). When Amphicyon longiramus was originally named by Dr. Theodore E. White of the Harvard Museum of Comparative Zoology, he believed that it coexisted along with another, smaller species of Amphicyon. The name was used to emphasize this species’ seemingly longer limbs and skull (many bony elements are generally referred to as a “ramus” in anatomy). The two species originally named by Dr. White have since been combined under the name Amphicyon longiramus, with more specimens making it clear that the initial variation he observed was within a single sexually dimorphic species (Olsen, 1960).

Known primarily from the Thomas Farm Site in north-central Florida and several localities in southeastern Texas. Emry and Eshelman (1998) reported specimens of “Amphicyon intermedius” from the Pollack Farm Local Fauna of Delaware, which are similar to the same elements of Amphicyon longiramus from Florida. This occurrence indicates that Amphicyon longiramus may have been distributed throughout much of the eastern half of North America during the early Miocene.

Amphicyon longiramus was the top carnivore of Florida’s early Miocene (Hulbert, 2001), with the largest body size among predatory animals preserved at the Thomas Farm locality. Body mass estimation among amphicyonids is notoriously difficult (Figueirido et al., 2011), due in part to the disproportionately long skulls in this group—a feature that is exaggerated in Amphicyon longiramus (Olsen, 1958); yet Amphicyon longiramus clearly dominates in size over contemporaneous carnivores. This makes identification of skeletal elements relatively easy for researchers.

Amphicyon longiramus is one of the oldest members of the subfamily Amphicyoninae in Florida. Along with the smaller amphicyonine Cynelos caroniavorus, also found at Thomas Farm (Hulbert, 2001), Amphicyon longiramus is thought to have dispersed from Europe into North America about 18 million years ago (Hunt, 1998). While other beardog species were present in Florida from the late Oligocene to the late Miocene (Hulbert, 2001), most are known only from sparse material. Amphicyon longiramus is the only species for which there is ample fossil evidence, and it is therefore the only Florida amphicyonid that has been thoroughly described (Olsen, 1958, 1960). The holotype of the species, along with other specimens, is housed in the Harvard Museum of Comparative Zoology. The Florida Museum of Natural History has over 550 specimens in its collection, and has the only known mounted skeleton of the species on public display.

Amphicyonids encompass a wide variety of carnivorous mammal ecomorphologies that are today filled by canids and ursids (Figuerido et al., 2011). Like modern carnivores, many species of bear-dogs (including Amphicyon longiramus) were highly sexually dimorphic (Hunt, 1998; Figs. 2-3), with males being much larger than females. Fossil burrows indicating denning behavior in large amphicyonids have been found in Nebraska (Hunt et al., 1983). 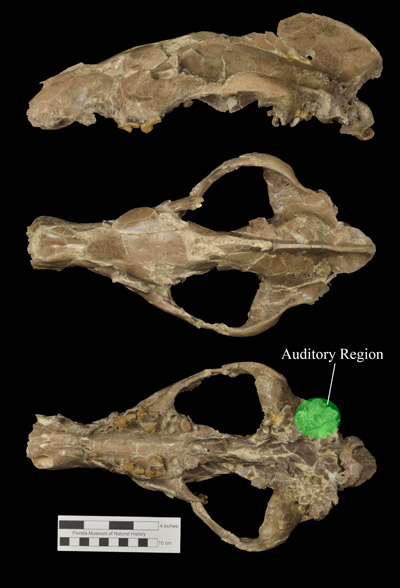 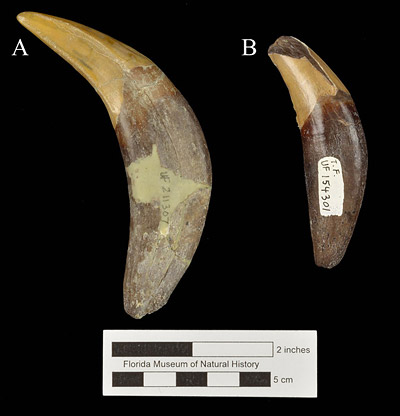 Interestingly, two locomotive types seem to have developed within the family Amphicyonidae, emphasizing two different feeding strategies. Some amphicyonids were digitigrade, long-limbed, and had narrow limb articulations, making them effective running predators. One example is Borocyon robustum, a well-known amphicyonid in western North America (Hunt, 1998, 2009). These bear-dogs emphasized a shearing dentition excellent for slicing meat, and were the ecological equivalents of wolves. In contrast, other species of bear-dogs, such as Amphicyon longiramus, had plantigrade feet and robust limbs with broad articulations (Figs. 3-4), giving them a stance much more similar to modern bears (Hunt, 1998). These heavy, slow-gaited amphicyonines tended to have broader molars, well-designed for bone crushing, such as the upper first molar (M1) of Amphicyon longiramus pictured in Figure 6. Its closest modern ecologic equivalent is the grizzly bear.

Olsen, S. J. 1958. The fossil carnivore Amphicyon intermedius from the Thomas Farm Miocene, Part I: Skull and dentition. Bulletin of the Museum of Comparative Zoology 118(4):155-172.