Weighing as much as 22,000 pounds (about the size of a large mammoth), Amebelodon britti is one of the largest land mammals to have ever lived in North America.

The species is known from Florida, Texas, and Kansas. Type locality is the Moss Acres Racetrack Site, from western Marion County, Florida (Lambert, 1990).

Shovel-tuskers are a group of gomphothere proboscidians characterized by relatively flat (as opposed to oval or round) lower tusks. Taxonomically, the group is either referred to as the family Amebelodontidae (e.g., Gheerbrant and Tassey, 2009; Markov and Vergiev, 2010) or the subfamily Amebelodontinae (e.g., Lambert, 1996; Shoshani, 1996; Sanders and Miller, 2002; Shoshani and Tassey, 2005; Wang et al., 2013a, 2015). Amebelodonts are primarily known from the Miocene Epoch, and their range includes Africa, Europe, Asia, and North America. The genus Amebelodon is known from three well-recognized late Miocene species from North America, the type species Amebelodon fricki (Great Plains only), Amebelodon floridanus (Florida and Great Plains), and Amebelodon britti (Florida and Great Plains) (Tassey and Shoshani, 1996; Shoshani and Lambert, 1998). Other North American species formerly placed in this genus are now either considered synonyms of one of those three or are referred to different genera. Two species of shovel-tuskers from the Old World were originally assigned to Amebelodon: Amebelodon tobieni Guan from China and Amebelodon cyrenaicus Gaziry from North Africa; but later workers have referred the former to the genus Protanancus and the latter to Platybelodon (Tassey and Shoshani, 1996; Wang et al., 2013b, 2015). The evolutionary origins of Amebelodon ultimately lie within Old World amebelodonts, but whether it dispersed directly from Asia in the late Miocene, or whether it arose in North America from the middle Miocene genus Serbelodon are as yet unclear.

Amebelodon britti is larger and more advanced than the other species within the genus Amebelodon (Lambert, 1990). For example, the length of the lower third molar in the next largest species, Amebelodon fricki, is 229 mm (about 9 inches), while the lengths of the same tooth in the two known examples from Florida are 286 mm (UF 70000) and 277 mm (UF 135826). Indeed the lengths of its limb bones equal or exceed those of late Pleistocene mammoths. For example, the lengths of the femur and tibia of Amebelodon britti are 1297 and 744 mm (about 4¼ and 2½ feet), respectively (Lambert, 1990). Osborn (1942) listed femur length of Mammuthus columbi to range between 1230 and 1393 mm, while its tibiae are 685 to 825 mm long. Based on measurements of the femur, the mass of Amebelodon britti was estimated at approximately 10,000 kilograms, which lies within the range of Mammuthus columbi. These figures imply that Amebelodon britti is one of the largest land mammals to have ever lived in North America (Lambert, 1994). 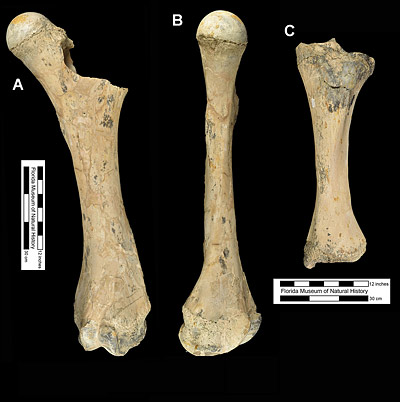 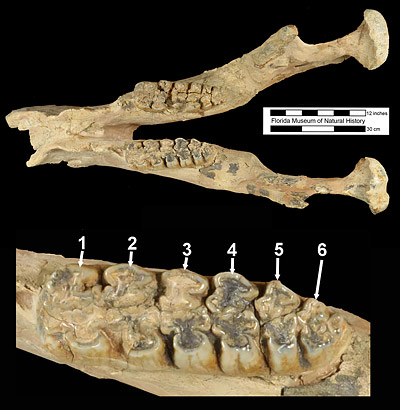 Figure 3. UF 70000, holotype mandible of Amebelodon britti from the Moss Acres Racetrack Site, Marion County, Florida. Above is dorsal view of entire mandible; below is close-up of left lower third molar with lophids numbered. Having 6 or more lophids on the third molar is diagnostic for this species of Amebelodon.

The molar teeth of Amebelodon britti show the classic conical “gomphothere” pattern, and, as is typical for amebelodonts, both the inner and outer cusps bear complex folds (called trefoils by paleontologists who study proboscidians). The second molars have four ridges (lophs or lophids), while the third molars have six or seven (Fig. 3). In contrast, other species of Amebelodon have three ridges on their second molars and four or five on their third molars. When Amebelodon britti was first described in 1990, second molars were only known from referred specimens from Texas and Kansas, none from Florida. But continuing excavations at the Moss Acres Racetrack Site in the early 1990s produced a second mandible and two crushed skulls, all preserving a four-ridged second molar.

Amebelodon britti had very large upper and lower tusks. Each lower tusk is about 1.25 meters (4 feet) long, 175 mm (7 inches) wide, and only about 55 mm (2 inches) thick. The flattened lower tusk has a concave dorsal surface and a squared-off internal (medial) edge where the two tusks meet. One of the surprising features of the species is the internal structure of the lower tusk. In other species of Amebelodon, the internal tusk is formed by concentric layers of dentine, similar to that of typical proboscidean tusks. But in Amebelodon britti, the inner part of the lower tusk is composed of rods of dentine running the length of the tusk. Similar structures are also found in the lower tusks of another amebelodont Platybelodon. However, Lambert (1990, 1994) found that their structure differed in details, and he believed the feature evolved independently in the two genera. The upper tusk of Amebelodon britti is over 1.5 meter (4.5 feet) long, with a maximum diameter of almost 300 mm (12 inches) and a 2- to 3-inch wide enamel band running its entire length. The upper tusk is gently curved, and did not grow in a spiral form like those of the genera Rhynchotherium and Cuvieronius.

The distal ends of both the upper and lower tusks bear wear facets, indicating heavy use. The wear facets on the upper tusks have macroscratches that are roughly perpendicular to the tusk’s enamel band. This shows evidence that the tusks were used for scraping, but it is unclear whether or not scraping was a component of feeding behavior. Scraping may have instead been used to sharpening the edge of the enamel for cutting. Evidence for cutting can also be seen with scanning electron microscopes (SEM), in which scratches can be seen parallel to the tusk’s enamel band (Lambert, 2005). Lambert’s (1992, 2005) analyses of the tusks suggest a high degree of individual variation within populations, and use of the tusks for a variety of functions including bark scraping, cutting tough vegetation, and digging in soft substrate, possibly either to find food (roots?) or water.

The 1991 excavation at the Moss Acres Racetrack site yielded two Amebelodon britti skulls. One of the skulls bears heavily retracted nasal bones, much more than the nasal bones of modern elephants. This implies that the proboscis (trunk) was large and well developed, possibly more so than that of modern elephants. It is possible that this finding can be applied to the genus Amebelodon as a whole (Lambert, 1994). Amebelodon is frequently reconstructed as having small upper tusks and a short, flattened trunk, but these are actually inferences from Platybelodon, and not supported by the actual fossils.

Guan, J. 1996. On the shovel-tusked elephantoids from China. Pp. 124-135 in J. Shoshani and P. Tassey, eds., The Proboscidea, Evolution and Palaeoecology of Elephants and Their Relatives. Oxford University Press, Oxford.

Lambert, W. D. 1996. The biogeography of the gomphotheriid proboscidians of North America. Pp. 143-148 in J. Shoshani and P. Tassey, eds., The Proboscidea, Evolution and Palaeoecology of Elephants and Their Relatives. Oxford University Press, Oxford.

Shoshani, J. 1996. Para- or monophyly of the gomphotheres and their position within Proboscidea. Pp. 149-177 in J. Shoshani and P. Tassey, eds., The Proboscidea, Evolution and Palaeoecology of Elephants and Their Relatives. Oxford University Press, Oxford.

Tassey, P., and J. Shoshani. 1996. Appendices B and C1. Pp. 352-373 in J. Shoshani and P. Tassey, eds., The Proboscidea, Evolution and Palaeoecology of Elephants and Their Relatives. Oxford University Press, Oxford.