Habitat Use and Behavioral Studies

The migration and movement of elasmobranchs found within the Indian River Lagoon.

This study seeks to gain insight into the movements and migration of rays in one of their primary Florida inshore habitats, the Indian River Lagoon (IRL) system. Rays have been shown to occur within this area in high abundance and likely represent an important component of the ecosystem (Snelson and Williams 1981). Despite their ecological significance, fundamental life history information is limited or lacking for many of these species, including when and where they reproduce and what areas serve as nurseries. In addition, little is known about the movements of ray species within the IRL or the migration of these animals to and from the lagoonal system. Information on the environmental preferences, home range, habitat use, and seasonal migrations of ray populations is essential to adequately understand and protect these species and their critical habitats. 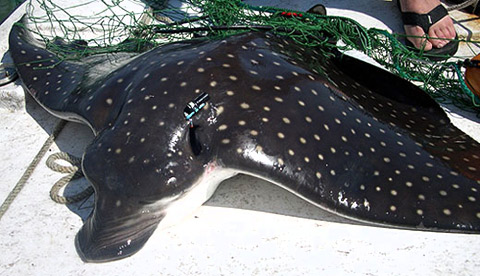 An acoustic array of 27 Vemco VR-2 receivers co-owned by the University of Florida and the Kennedy Space Center/Dynamac Corporation is located within the Mosquito Lagoon portion of the IRL (Vemco Ltd. 100 Osprey Drive, Shad Bay, Nova Scotia, Canada B3T 2C1). To date 40 rays of four species have been outfitted with transmitters within the IRL: 20 bluntnose stingrays, 17 smooth butterfly rays, two spotted eagle rays and one cownose ray. Data from the acoustic receivers is downloaded on a bimonthly to monthly basis depending on the density of animals within the array. In the upcoming months, 20 additional transmitters will be applied to three additional smooth butterfly rays, and 17 pelagic rays (spotted eagle or cownose rays) captured within the lagoon. Movements of ray species will be monitored by the passive system for up to 18 months. We currently have a grant pending to increase the number of animals transmittered to a total of 80 within the upcoming year and to expand our tagging efforts to include the other two Dasyatis species commonly found within the lagoon (Dasyatis sabina and Dasyatis americana). These data will aide in the identification of both daily and seasonal movements of the tagged rays within the IRL, and enable us to isolate the timing of their migrations in and out of the system. In addition this study will allow us to compare the movements of pelagic (cownose rays and spotted eagle rays) and benthic species (bluntnose rays and smooth butterfly rays). Water quality measurements including temperature, salinity, and dissolved oxygen recorded at monitoring stations on a regular basis throughout the year will be used to determine if the rays’ movements can be correlated to environmental cues. 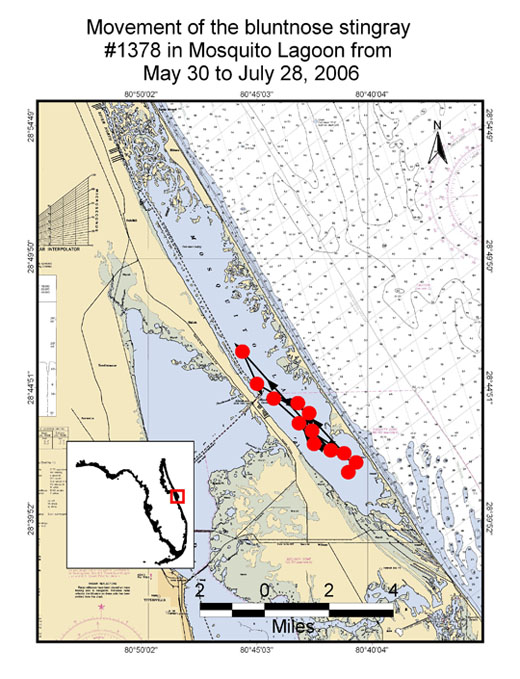 The Cedar Key area of the Gulf of Mexico consists of several small islands situated just offshore between the Suwannee River mouth to the northwest and the Waccassasa River mouth to the southeast. This area encompasses many diverse marine habitats including sea grass beds, mangroves, mud flats, oyster bars, tidal channels, and salt marshes. The incidental capture of numerous elasmobranch species within this area off the western Florida coast by scientists working for the University of Florida and the Florida Fish and Wildlife Conservation Commission indicates this region may support a diverse and abundant assemblage of sharks and rays. This recent work suggests that bull sharks, blacktip sharks, Atlantic sharpnose sharks, bonnethead sharks, smooth butterfly rays, cownose rays, southern stingrays, bluntnose stingrays, and Atlantic stingrays all commonly occur within this region. Little is known about the life history and ecology of many of these species, particularly the ray populations. In addition, neonate and juvenile bull sharks appear to be abundant in the Waccassasa River mouth and the southern portion of Waccassasa Bay indicating this area may function as a nursery ground for bull sharks and possibly other elasmobranch species. Nursery areas are thought to enhance survivorship of neonate and juvenile sharks due to the presence of increased resources and a lack of large predators. These areas tend to be closer to land and more vulnerable to pollution and environmental disturbances making the identification and conservation of nursery habitat critical to the health of shark populations. 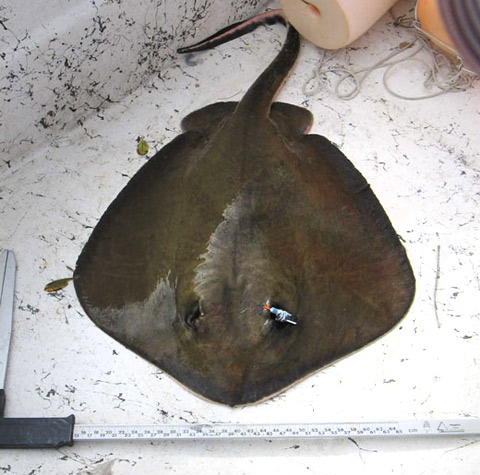 In cooperation with NMFS South East Fishery Science Center we will continue a monitoring study in the Cedar Key area in the Gulf of Mexico this upcoming summer. Using standardized gillnetting gear, areas from the Waccassasa River mouth to the Suwannee River mouth will be sampled using stratified random sampling techniques. This will allow us to determine if this area functions as a nursery and Essential Fish Habitat for several elasmobranch species. The use of gear consistent with that used to study elasmobranch nursery areas in the western Gulf of Mexico and along the southern Gulf coast of Florida will allow us to compare the productivity of this area with nearby areas. To date this area of the Gulf of Mexico is largely unstudied and represents a significant gap in our knowledge of elasmobranch species within the Gulf of Mexico.