by Jerald Pinson • December 16, 2021
Glasswing butterflies have unique transparent wings fringed and dotted with colorful markings that allow them to blend in with their surroundings while simultaneously warning predators of their toxicity. Photo courtesy of Keith Willmott

With over a million known species, insects are by far the most diverse group of organisms on Earth, with conservative estimates indicating there are millions more waiting to be found. But extinction due to human pressures may be outpacing the rate of discovery, with species disappearing before researchers even knew they existed.

To conserve these species, scientists must first know where they are. While the distributions of some plant and animal groups have been extensively mapped, comparatively little is known regarding the whereabouts of the world’s insects.

In a new study, researchers created the most detailed distribution map to date of butterflies in the American tropics, showing that areas of highest diversity coincide with regions most threatened by deforestation and development. The study specifically focused on Ithomiini, or glasswing butterflies, a large group with nearly 400 species that occur throughout much of Central and South America. Their ubiquity may make them a good indicator for the fate of other insects in the region.

“If we want to understand the diversity of insects in general, then one approach is to concentrate on groups that likely reflect the diversity of all insects and for which we have good knowledge, like butterflies,” said study co-author Keith Willmott, curator and director of the Florida Museum of Natural History’s McGuire Center for Lepidoptera and Biodiversity.

Mimicry both helps and hinders glasswings

Glasswing butterflies get their namesake from their unusual, transparent wings marked with colorful spots of alternating hues and patterns. As with many other butterfly species, such as monarchs, these markings serve as a warning. Male glasswing butterflies feed on the nectar and tissue of poisonous plants, concentrating the toxins in their abdomen and passing them on to females when mating. These toxins, a type of alkaloid, give the butterflies and their eggs a bitter taste that makes them unpalatable.

But would-be predators aren’t born innately knowing not to eat these butterflies, instead learning through trial and error.  As a result, many glasswing species have evolved similar wing patterns that give them strength in numbers.

“Since different species share the same warning color patterns, they share the overall cost per species of educating predators to avoid them,” Willmott said. 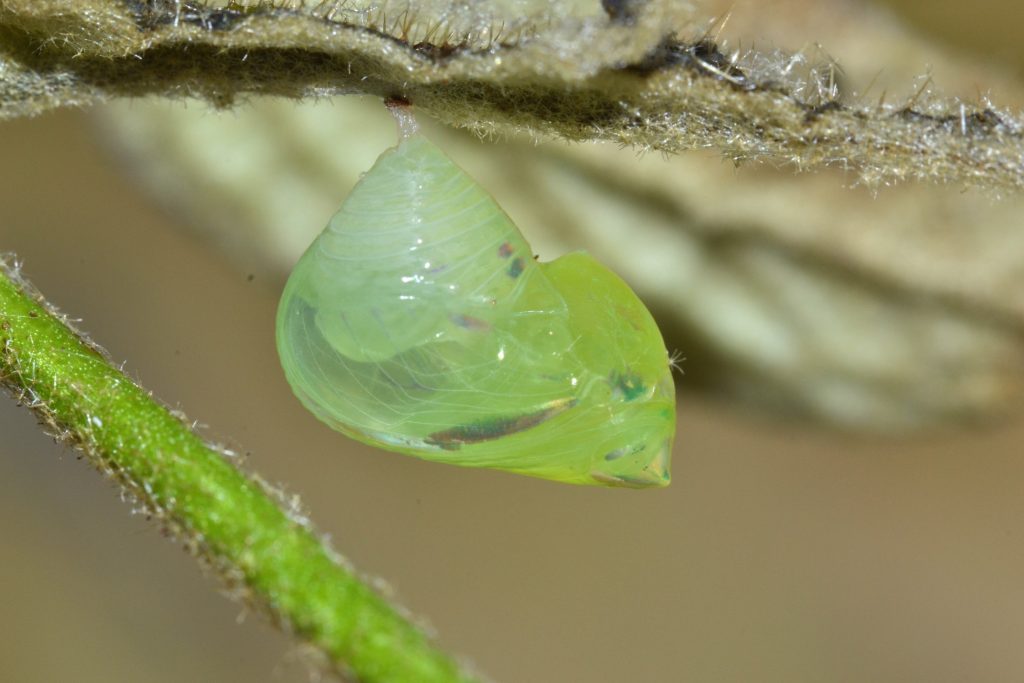 Some glasswing caterpillars and their chrysalides also share the transparent tendencies of their butterfly counterparts. 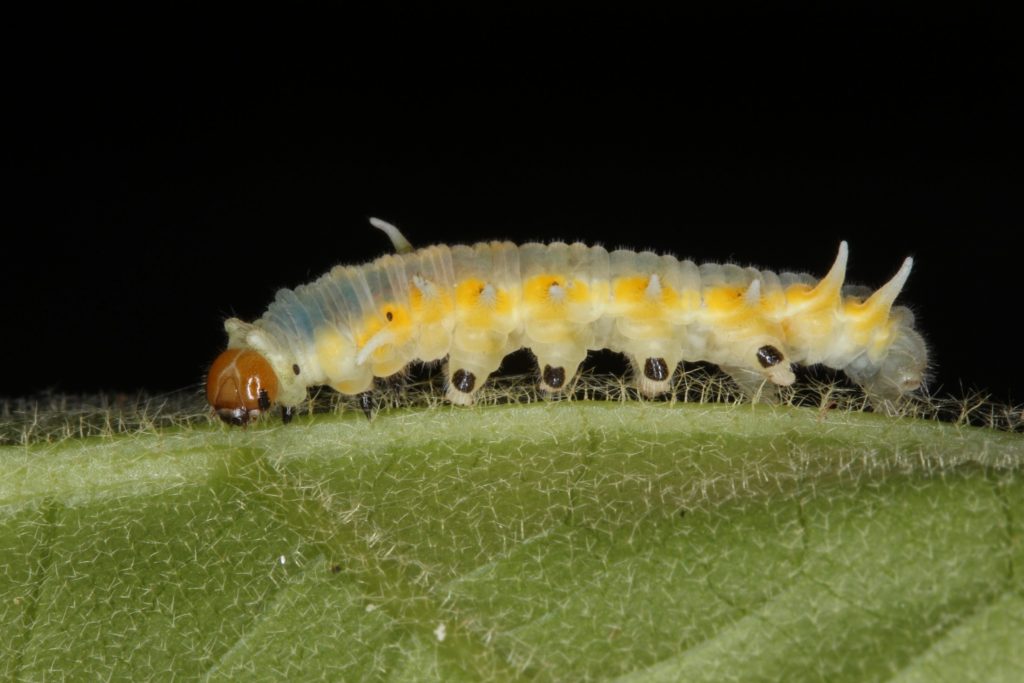 Habitat destruction is especially problematic for glasswing butterflies and caterpillars, which rely on a particular suite of plants for food and protective toxic compounds. 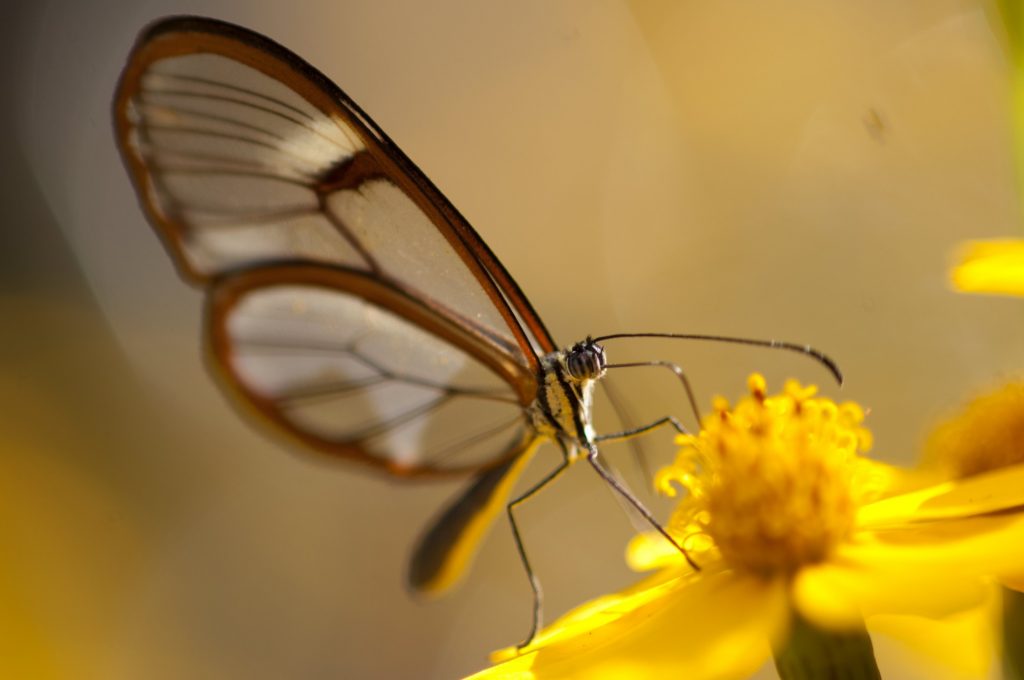 Male glasswing butterflies feed on poisonous plants, building up high levels of toxins in their bodies that confer a bitter taste unpalatable to predators. 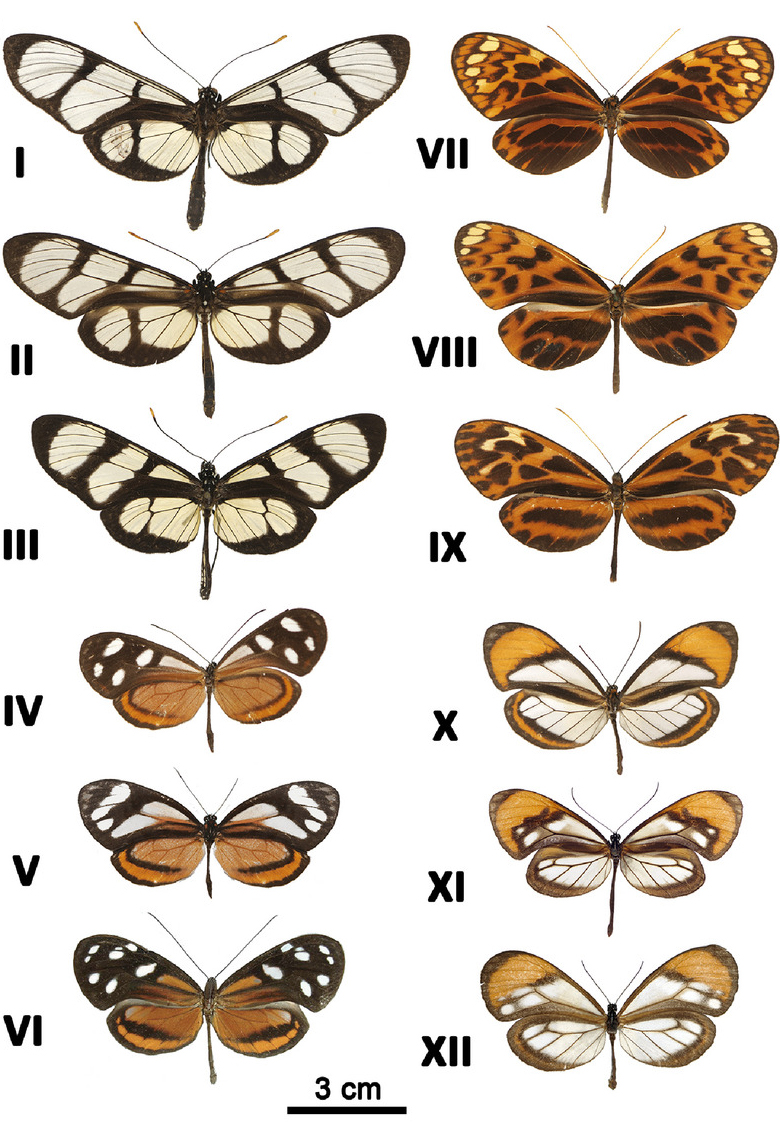 Many glasswing species have virtually indistinguishable wing patterns and markings despite being distantly related.

This type of resemblance, called Müllerian mimicry, has helped glasswing butterflies survive and diversify in the varied habitats of the tropics, but it also comes at a cost. While this strategy is effective when all species resembling one another are thriving, the extinction of any one species could jeopardize the survival of others, Willmott explained. “This is particularly true if one of the more common species goes extinct, because all the others lose the benefit they gained from being involved in Müllerian mimicry with those butterflies.”

Glasswing butterflies are most diverse and most vulnerable at high elevations

Willmott and his colleagues have spent the last several decades trekking across mountains and forests in search of glasswings, describing new species and documenting their natural history along the way. By combining the data they’ve collected over the years with information gleaned from specimens in more than 60 museums and private collections, the researchers compiled nearly 30,000 distribution records. They used this extensive dataset to map the diversity of glasswings and the interactions between lookalike species throughout the American tropics.

Their results indicate glasswings are highly diverse in particular parts of their range, including the Amazon River basin, where their transparent wings help them blend in against the backdrop of forest gloom. But the majority of species cluster together in mountainous biodiversity hotspots. The eastern slopes of the Andes Mountains contained the top 5% of glasswing diversity, while secondary hotspots included the highlands of Central America and the Atlantic coastal forest of Brazil.

While large tracts of the Amazon rainforest remain relatively undisturbed, glasswing diversity in the tropical Andes frequently overlapped with areas at the highest risk of habitat loss due to land conversion for agriculture. This was especially true for species with restricted distributions, highlighting the pressing need for conservation efforts in these areas. 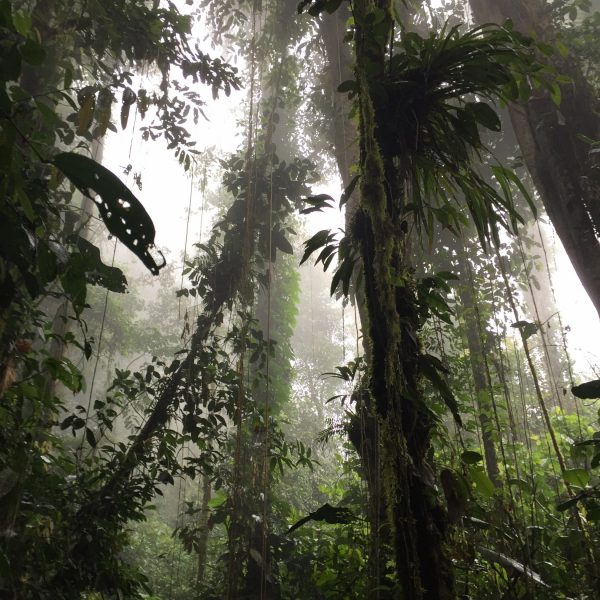 Glasswing butterflies are diverse in the Amazon River basin, where their transparent wings allow them to fade into the green and gloomy mosaic of leaves and shifting light near the forest floor. 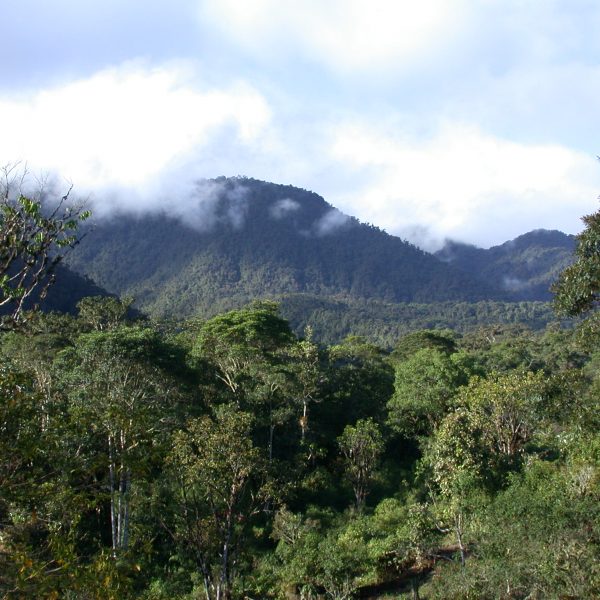 Glasswing butterflies are most diverse in the foothills and high elevations of the Andes Mountains, where their ranges often overlap with regions threatened with deforestation.

Mountainous regions create a variety of small, localized environments as they climb in elevation. The relatively young Andes, which are among the world’s highest mountains, support a correspondingly large number of species. The differences in topography, temperature and rainfall also make the Andes an ideal place to grow a variety of crops. “At the moment, loss of habitat is the most significant threat,” Willmott said. “It is just an unfortunate coincidence that areas that are good for people to live are also areas that support high animal and plant diversity.”

Lead author Maël Doré, a doctoral student at the National Museum of Natural History in Paris, also worries that climate change may further limit the range of already restricted species on the slopes of tropical mountains. As temperatures increase, species may cope by shifting their distributions to higher elevations, but whether glasswing communities will move fast enough to keep up with climate change is uncertain.

Far from the Andes, the lower and older mountains along the Brazilian Atlantic coast are home to a number of rare and endemic glasswing species, which also face threats from habitat destruction. “This region has experienced almost five centuries of human occupation, but it was also here that pioneering initiatives to protect Neotropical butterflies and their habitats were born almost 100 years ago”, said co-author André Freitas, a professor at the Universidade de Campinas in São Paulo, Brazil.

Still, Willmott and his colleagues remain optimistic. With a detailed map of where butterflies occur, conservation efforts can be directed to preserve environments and communities under threat, as well as those that are still untouched by humans.

“With more accurate maps of butterfly distributions, we can identify species and communities that currently lack protection, to more effectively focus limited resources where they are most needed,” Willmott said.

The researchers published their findings in the journal Diversity and Distributions.

Boris Leroy of the Laboratory of Biology of Aquatic Organisms and Ecosystems, Nicolas Chazot of the Swedish University of Agricultural Sciences, James Mallet with Harvard University, Jason Hall with the Smithsonian Institution, Gerardo Lamas of the Peruvian Museum of Natural History in Lima, Kanchon Dasmahapatra of the University of York, and Colin Fontaine and Marianne Elias of the Museum of Natural History in Paris are also co-authors on the study.