by Jerald Pinson • September 7, 2022
North America's rarest snake, Tantilla oolitica was recently spotted in the Florida Keys in the equally rare condition of having attempted to swallow a centipede too large for it to consume. Photo courtesy of Drew Martin

North America’s rarest snake, Tantilla oolitica (rim rock crowned snake), was recently spotted in a park in the Florida Keys after a four-year hiatus. While this would normally be cause for celebration among conservationists, the snake sighting was more a source of incredulous awe than anything else. The snake was found dead, locked in lifeless combat with a giant centipede it had managed to swallow halfway.

The fatal duel marks the first time that scientists have observed the snake’s eating habits. Closely related species are known to have a preference for centipedes, but T. oolitica is so rarely seen that, until now, no one had any definite idea of what it ate. Researchers at the Florida Museum of Natural History created CT scans of the interlocked pair and published their results this Sunday in the journal Ecology.

“I was amazed when I first saw the photos,” said co-author Coleman Sheehy, the Florida Museum’s herpetology collection manager. “It’s extremely rare to find specimens that died while eating prey, and given how rare this species is, I would never have predicted finding something like this. We were all totally flabbergasted.” 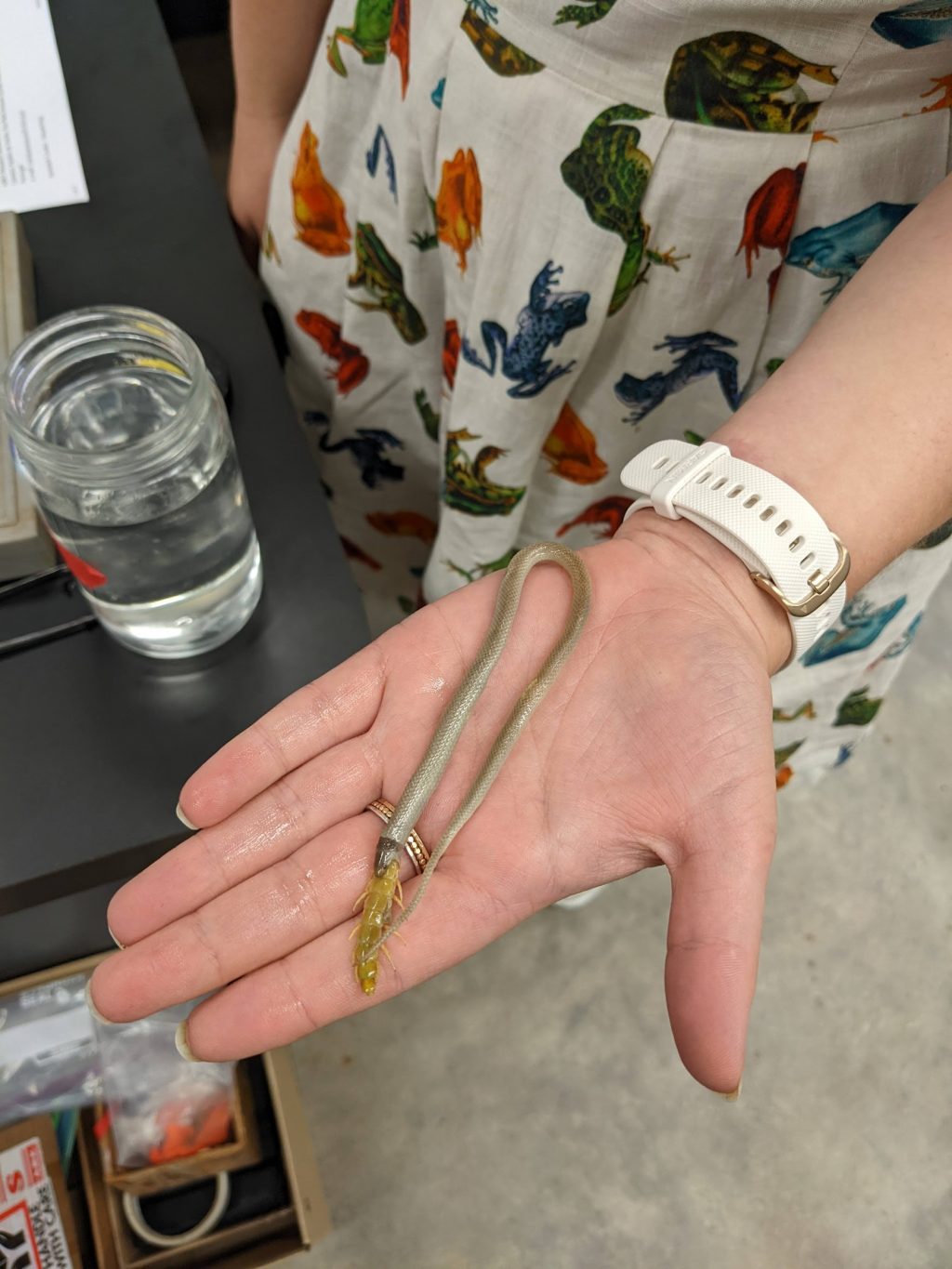 The specimen is an invaluable addition to natural history collections, and the resulting CT scans will enable researchers the world over to instantaneously study aspects of this rare snake that before now would have been impossible. 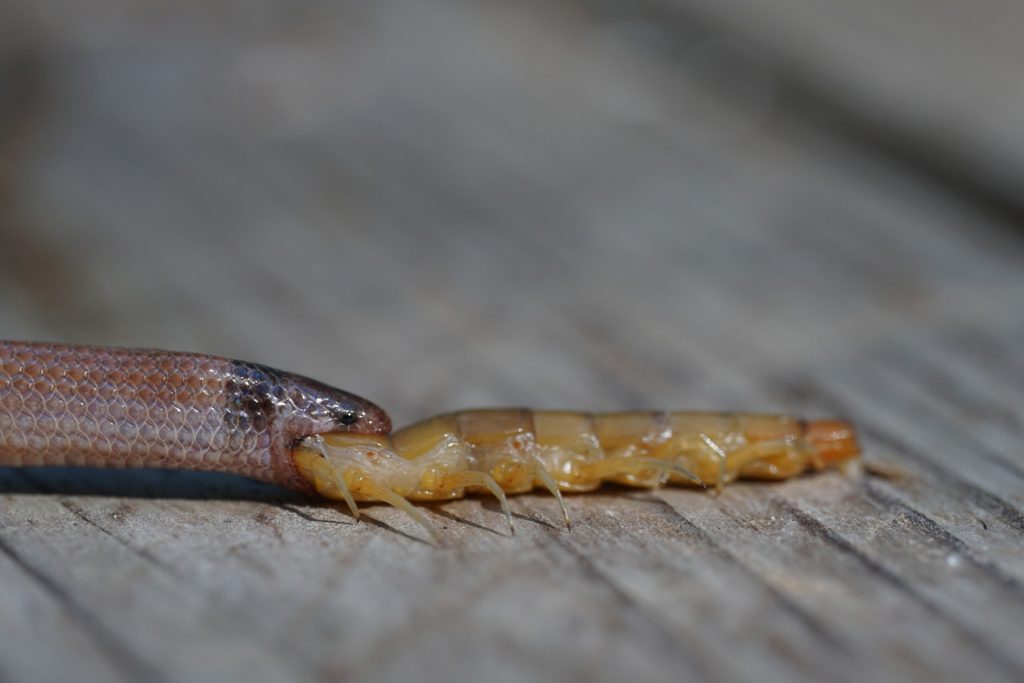 The snake and centipede were found by a hiker in John Pennekamp Coral Reef State Park in Key Largo, who alerted park staff. 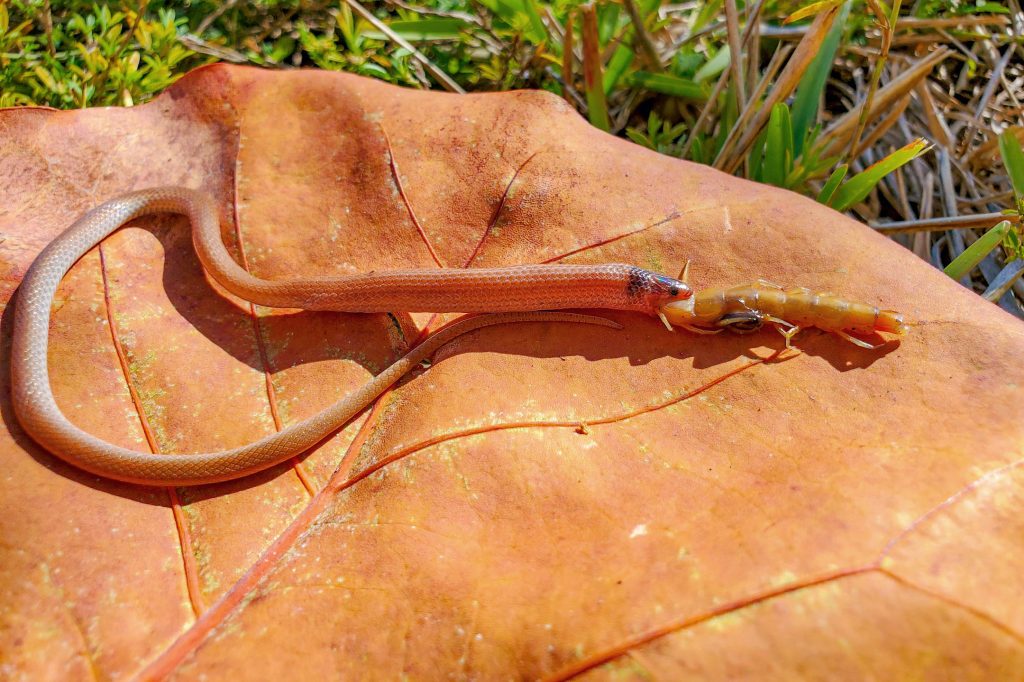 The snake was initially found on the side of a trail by a hiker in John Pennekamp Coral Reef State Park in Key Largo, who alerted park staff. The specimen quickly found its way to the Florida Museum, where researchers hoped to ascertain the exact cause of death.

The most obvious explanation, given that the centipede was one-third the size of the snake, would be asphyxiation. But snakes are known for gorging on prey much larger than themselves. Unlike jaws in humans and most other vertebrates, which are directly attached to the skull, snake jaws are held in place by flexible ligaments and muscles that allow them to wrap their heads around their food.

To be certain, researchers would need to take a look inside. In the past, this would have required a dissection, which causes irreversible damage that can hamper future study. More recently, however, scientists have turned to CT-scanning technology, which provides an unparalleled look at an organism’s anatomy without physically altering the specimen.

Jaimi Gray, a postdoctoral associate at the museum, stained the snake with an iodine solution to enhance the contrast of its internal tissues and constructed a fine-scaled 3D model from CT scans.

“We were able to perform a digital autopsy, which allowed us to examine the centipede and snake, including its injuries and gut contents, without ever picking up a scalpel,” she said. After scanning, the specimen was de-stained and now remains intact on collection shelves at the Florida Museum for future researchers to study.

The model revealed a small wound on the snake’s side, likely imparted by the centipede’s powerful venomous pinchers. Snakes that commonly dine on centipedes are thought to have some measure of resistance to their mélange of caustic venom, but that assumption has yet to be definitively demonstrated, Sheehy said. The bite seemed to cause some internal bleeding, but neither that nor the toxin was enough to deter the snake from killing and partially swallowing its prey.

Instead, the final blow seems to have been dealt by the relative size of the two organisms. Close inspection of the CT scans showed the snake’s trachea was pinched at the approximate location where the centipede’s circumference was the largest. This likely cut off the snake’s air supply, resulting in asphyxiation. 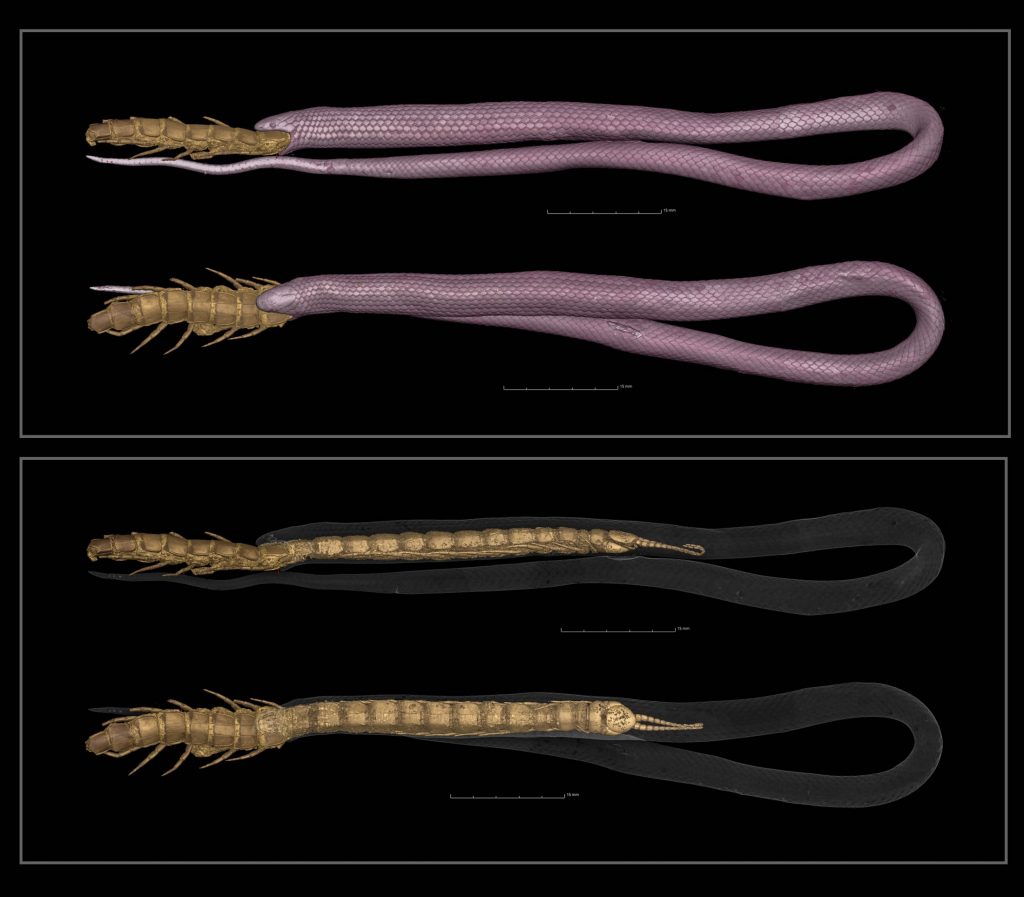 Researchers performed a digital dissection of the interlocked specimens by creating CT scans. 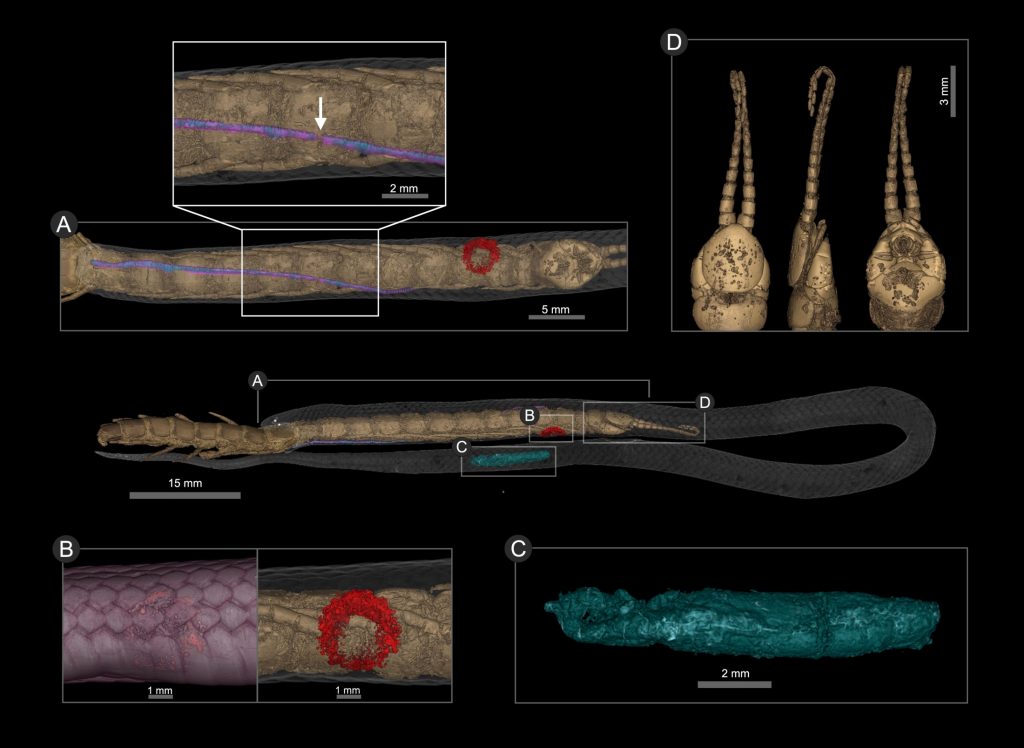 Close inspection of the CT scans revealed the centipede imparted a parting bite to the snake (red) before being swallowed and blocking the snake’s trachea (purple).

The results offer an intimate glimpse of a species many fear is on the verge of extinction. Tantilla oolitica once thrived in pine rocklands that spread from Central Florida south to the Keys but has since undergone a severe reduction in population size. The species has been listed as threatened in Florida since 1975, and efforts are underway by the U.S. Fish and Wildlife Service to have the species federally listed.

Pine rockland ecosystems evolved for millions of years along the spine of an ancient coral reef, harboring a long list of rare plants and animals found nowhere else on Earth. But the same attributes that fostered the growth of hyperdiverse forests also made this part of Florida an ideal place to build towns and cities. Today, an uninterrupted sprawl of development, from Miami to West Palm Beach, has almost entirely replaced the native ecosystems. Outside of the Everglades, only 2% of the original pine rocklands remain. For animals endemic to pine rocklands, like T. oolitica, the new cityscapes have meant near annihilation.

“We can’t say for sure whether or not they’re still present in peninsular Florida. Absence of evidence is not evidence of absence, but their habitat has basically been destroyed,” Sheehy said.

For now, researchers are encouraged by what seems to be a somewhat stable population of T. oolitica in Key Largo and plan to make as much use of the new specimen as possible. The CT scans and the 3D model are available for free on MorphoSource and SketchFab, respectively, and there’s no shortage of new information that can be gleaned from them.

According to Sheehy, anyone interested in this specimen can access the CT-scan data to look at other aspects of the snake’s anatomy, and because this is the first CT scan for the species, they’ll be the first people to make those discoveries. “This study is just the beginning of what will be learned about this enigmatic species from the CT-scan data,” he said.

Funding for the study was provided in part by the National Science Foundation (grant #DBI-1701714).