Rhizosmilodon fiteae is a small-sized, saber-toothed cat known only from Florida; but most species of felids have large geographic ranges, so it would not be surprising to find its fossils in other areas of North America.

It was most likely primarily an ambush predator, and probably preferred prey such as deer, peccaries, small tapirs, and small horses.

Source of Species Name: named for Barbara Fite of Lutz, Florida, who donated the paratype specimen to the Florida Museum of Natural History.

Rhizosmilodon fiteae is known only from the Central Florida Phosphate Mining Distict, Polk and adjacent counties, Florida. Type locality is the Whidden Creek Site in the Fort Meade Mine of Gardinier, Inc., Polk County, Florida.

The first published record of a small-sized, saber-toothed cat from the Central Florida Phosphate Mining District (Bone Valley) was by Berta and Galiano (1983). They referred a single partial mandible to Megantereon hesperus, a species otherwise known only from the Blancan land mammal age in North America. Because the age of the Florida specimen was then the oldest record of the genus Megantereon, Berta and Galiano (1983) inferred that the genus had evolved in North America and subsequently dispersed throughout the Old World. Several later studies called the identification of Berta and Galiano (1983) into question (Turner, 1985; Palqvist et al., 2007; Webb et al., 2008; Hodnett, 2010).

After the publication of Berta and Galiano (1983), about two dozen additional specimens of a small-sized, saber-toothed cat were collected in the phosphate mines of central Florida. These demonstrated that their age was definitely late Hemphillian (earliest Pliocene), and that they were definitely not Megantereon (Webb et al., 2008). Wallace and Hulbert (2013) conducted an analysis of their evolutionary relationships and showed that they did belong in the tribe Smilodontini, and were also the sister taxon to Megantereon and Smilodon (Fig. 2). So, Wallace and Hulbert (2013) formally named this cat Rhizosmilodon fitae. It is not known to occur in other areas, but most species of felids have large geographic ranges, so it would not be surprising to find its fossils in other areas of North America. It is the oldest known member of the tribe Smilodontini.

Rhizosmilodon fitae is best known from its mandible and lower teeth (Figs. 4-6). They show a mixture of primitive features found in Miocene machairodontines from Eurasia, such as Paramachaerodus, and derived features found in Smilodon and Megantereon. Among its primitive traits are relatively large lower canines and third premolar (p3) teeth, relatively small incisors that do not jut out beyond the lower canines, fourth premolar (p4) with small anterior and posterior accessory cusps, and very small mandibular flange. Among its derived traits are p3 and p4 with strong posterior lean; long axes of p4 and first molar (m1) offset, not aligned with each other; a short, robust m1; and lower canine laterally compressed. 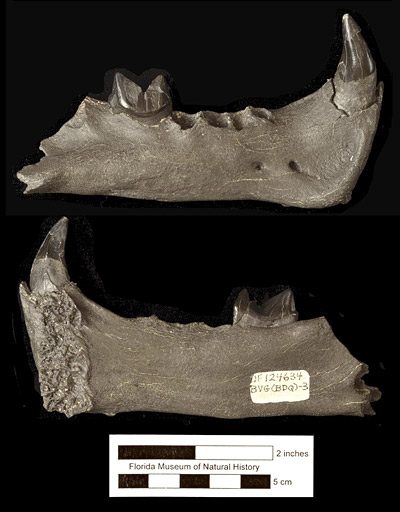 Figure 6. UF 22890, left mandible of Rhizosmilodon fitae with third and fourth premolars and partial first molar. This is the specimen first described by Berta and Galiano (1983). 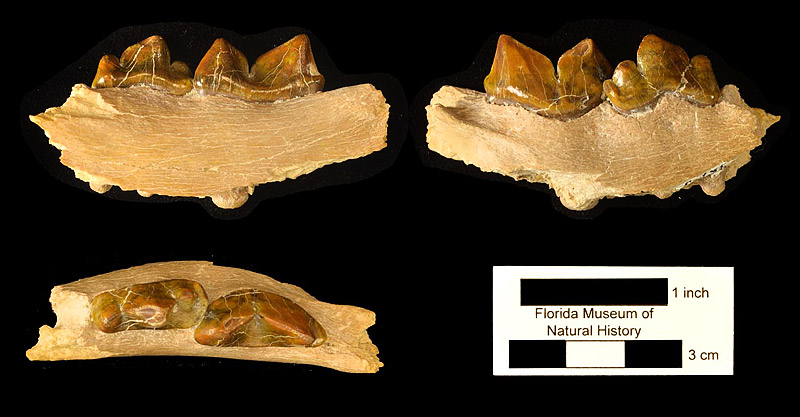 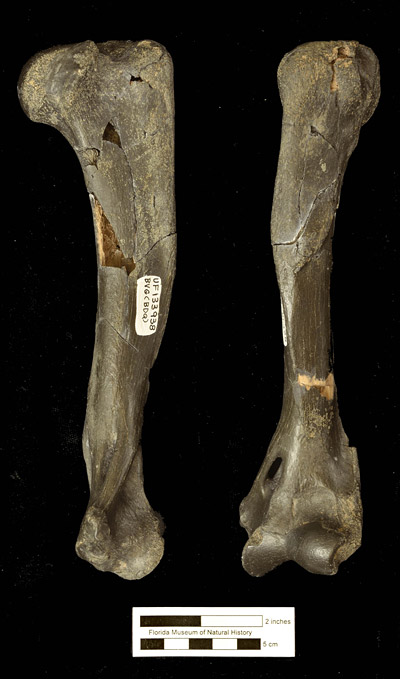 Berta, A., and H. Galiano. 1983. Megantereon hesperus from the late Hemphillian of Florida with remarks on the phylogenetic relationships of machairodonts (Mammalia, Felidae, Machairodontinae). Journal of Paleontology 57:892-899.

Palmqvist, P., V. Torregrosa, J. A. Pérez-Claros, B. Martínez-Navarro, and A. Turner. 2007. A re-evaluation of the diversity of Megantereon (Mammalia, Carnivora, Marchairdontinae) and the problem of species identification in extinct carnivores. Journal of Vertebrate Paleontology 27(1):160-175.

Turner, A. 1985. Megantereon cultridens (Cuvier) (Mammalia, Felidae, Machairodontinae) from Plio-Pleistocene deposits in Africa and Eurasia, with comments on dispersal and the possibility of a New World origin. Journal of Paleontology 61(6):1256-1268.