Pomatodelphis inaequalis is believed to be a type of river dolphin and likely had a wide salinity tolerance, living in nearshore marine and estuarine environments with the ability to travel up low salinity streams.

Because of their small teeth and weak jaws, the diet of Pomatodelphis inaequalis may have been more similar to squid-eating whales rather than modern fish-eating river dolphins.

Pomatodelphis inaequalis is only found in the southeastern United States, including Florida and Alabama.

Source of Species Name: not explicitly stated in Allen (1921), but it may refer to the asymmetry (“inequality”) in the skull, particularly the rostrum, in which the right side is compressed and the left side is expanded. This condition is present to various degrees in the premaxillae, maxillae, vomer, blowholes and teeth alveoli. It is also possible that the species name refers to the unequal size in tooth alveoli between the rostrum and mandible.

The origin of the generic name Pomatodelphis is similarly unexplained, but ‘pomato’ may be a variation (or misspelling) for potamo, which is river in ancient Greek. The name would then translate as river dolphin. Allen (1921) noted some morphological similarities between Pomatodelphis and the living river dolphin family Platinistidae.

Pomatodelphis inaequalis is only known from the southeastern United States, specifically Florida and Alabama. The type locality is Brewster Mine, owned by the Amalgamated Phosphate Company, near the town of Brewster in Polk County, Florida.

The first fossil cetaceans found in Florida were documented by Leidy (1889) from deposits in Peace Creek (now called the Peace River), and he attributed the vertebrae and teeth to the dolphin family. Allen (1921) later described some fossil cetaceans from Florida in more detail, including naming two new species, Schizodelphis depressus and Pomatodelphis inaequalis. These two species were later synonymized by Morgan (1994) based on the variability of several diagnostic features in the skull and jaws that were used to differentiate Pomatodelphis inaequalis, particularly the presence of pits on the maxillae that would occlude with the posterior teeth on the mandible. No fossils from Florida are currently referred to the genus Schizodelphis. In his synonymy, Morgan (1994) chose Pomatodelphis inaequalis as the valid species name over Schizodelphis depressus because it was more commonly used in the scientific literature, even though the latter had page priority in Allen (1921). The evolutionary relationships between fossil river dolphins such as Pomatodelphis and the modern river dolphins is still unsettled.  Molecular evidence suggests that river dolphins evolved at least three times: Platinistidae (today restricted to Asia); the Chinese Lipotidae (extinct as of 2007); and a South American group composed of two families, Iniidae and Pontoporiidae (Hamilton et al., 2001). Pomatodelphis is frequently regarded as being either a member of the Platinistidae or in an extinct family more closely related to the Platinistidae than any living family (e.g., Morgan, 1994). Barnes (2002) named the subfamily Pomatodelphininae, into which he placed the genera Pomatodelphis and Prepomatodelphis, and included the Pomatodelphininae in the Platinistidae.

As mentioned above in the Source of the Species Name section, it is possible that Pomatodelphis is actually a misspelling of Potamodelphis, which correctly translates as river dolphin in Greek. The name of the genus was possibly corrected, or just incorrectly cited, as “Potamodelphis” by Carroll (1988) and Sepkoski (2002). However, in both of these articles, the name is just included in a taxonomic list with no discussion, so neither can be used as a true, formal correction.

Characteristics considered to be diagnostic of the genus Pomatodelphis include: 1) greatly elongated, dorsoventrally-flattened rostrum and mandible (Morgan, 1994); 2) smaller combined width of lower jaws in relation to the rostrum so that the teeth in the lower jaw close inside the upper teeth “like the lid of a pot” (Allen, 1921); 3) faint depressions medial to the mandibular teeth alveolae which would meet the upper teeth in occlusion (Allen, 1921); 4) greatly enlarged supraorbital process of the frontal (Morgan, 1994); and 5) anterior mandibular teeth alveolae that are large and widely-spaced in comparison to the smaller, more closely-spaced more posterior alveolae that likely did not support functional teeth (Allen, 1921; Hulbert and Whitmore, 2006). 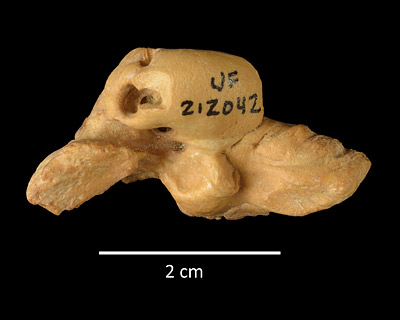 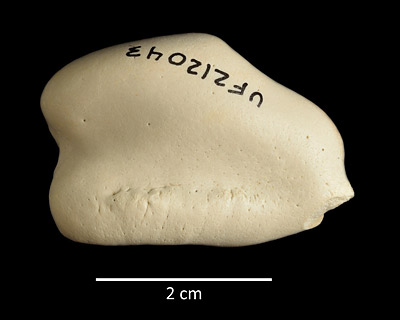 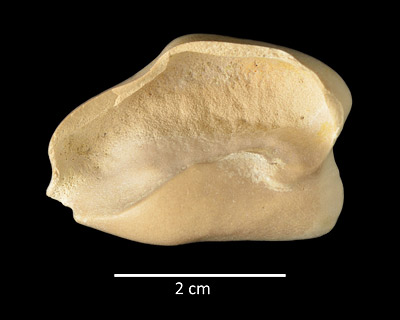 Platinistoids are generally piscivorous, but the unusual occlusion of the jaw of Pomatodelphis, indicates that Pomatodelphis inaequalis may not have actively captured fish. Allen (1921) suggests that its morphology is instead more similar to that of living squid-eating whales. That conclusion, however, has yet to be tested by later authors. Many modern platinistids are freshwater-tolerant and live in rivers, but fossil platinistids are usually reconstructed to be restricted to marine settings (Fordyce and Barnes, 1994). Pomatodelphis has been found in both marine (Agricola Fauna of Florida) and fluvial (Mauvilla Local Fauna in Alabama) settings and likely had a wide salinity tolerance, living in nearshore marine and estuarine environments with the ability to travel up low salinity streams (Hulbert and Whitmore, 2006). Hulbert and Whitmore (2006) also proposed that Pomatodelphis may have been a precursor to the adaptations of later platinistids, in which certain species are restricted to freshwater rivers.

Isolated ear bones, the periotic and the auditory bulla, are among the most commonly found specimens of Pomatodelphis inaequalis (Figs. 6-8).