Although ospreys are commonly seen today around bodies of fresh water, their fossils are very rare. This extinct species is only known from a total of eight specimens.

Its talons and hind limbs are not as well adapted for catching and holding onto fish as those in the living osprey.

Source of Species Name: Named after its type locality, the Love Bone Bed, which took its name from the property owners.

Extinct ospreys belonging to the genusPandion have been recovered from several places around the world, including  the middle Miocene of California (Pandion homalopteron; Warter, 1976), the late Miocene of Florida (Pandion lovensis; Becker, 1985), and the Oligocene of Egypt (Rasmussen et al., 1987). The sole living member of the genus Pandion is the species Pandion haliaetus. Pandion haliaetus has a worldwide distribution across all continents except Antarctica. Extant osprey fossils from Florida are known from the late Pleistocene (Hulbert and Becker, 2001). 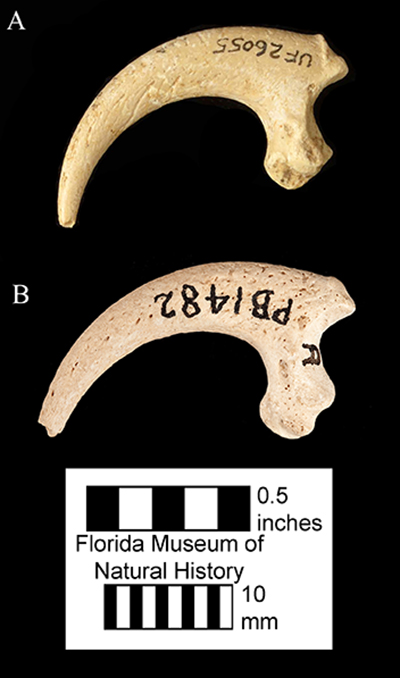 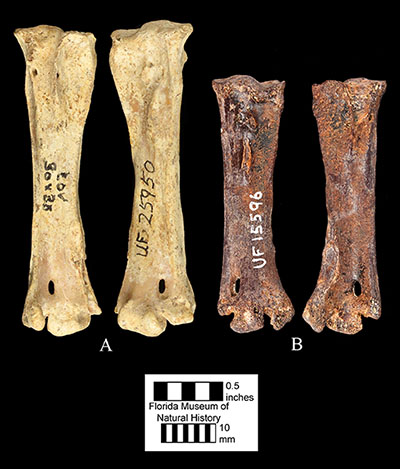 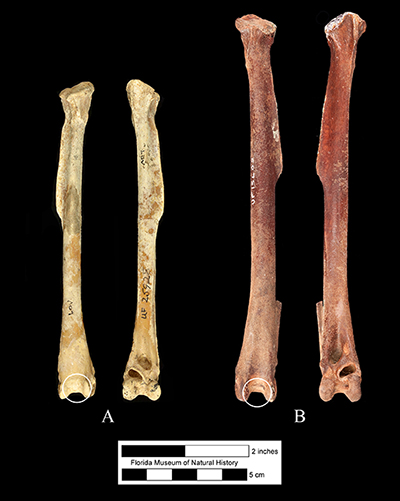 Figure 4. Tibiotarsi in anterior (left) and posterior (right) views for A) Pandion lovensis (UF 25928; paratype) and B) Pandion haliaetus (UF 15602). The intercondylar sulcus is circled in either specimen for comparison.

Pandion lovensis is the most primitive member of the genus based on the morphology of its hindlimb (Becker, 1985), and it is also the most hawklike of the family Pandionidae. Its hindlimb is considered less adapted for grasping fish when compared to the modern form (Hulbert and Becker, 2001). See Figure 2 for a comparison of the talon morphology of Pandion lovensis and Pandion haliaetus. One of the features that distinguishes Pandion lovensis from the extant species is its longer and more slender tasometatarsus (Figure 3) and a wider and shallower intercondylar sulcus in its tibiotarsus (Figure 4).