In huge numbers, bark beetles inscribe their life stories onto dead wood. Entire cities are carved out in each tree, cities that flourish one year only to collapse the next year from competition and disease. Like many human civilizations before ours, each bark beetle generation left intricate traces of their lives behind them. They didn’t know about us, and we know very little about them, but look closer and try to interpret the strangely symmetrical shapes. See love and birth, consumption and death.

It doesn’t matter. It is beautiful, and it lets you peek into a different universe where life pulsates fast and at a tiny scale. 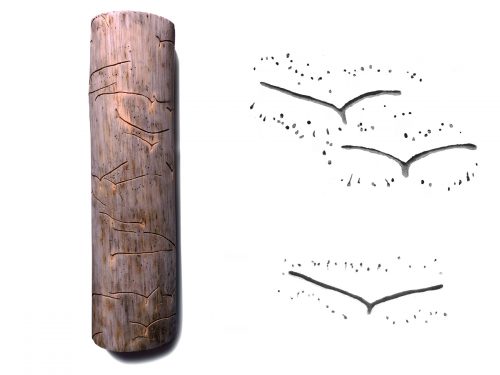 TOMICUS MINOR
Origin: Europe
Medium: Pine
From the artist’s life: The design looks like dizzy birds with ruffled feathers, but these tunnels have a purpose. Each female seeds the tree with a yummy fungus for her babies to eat. The young, living in pits around the main tunnel, spread the fungus even farther until the whole log is colonized. And then a strange thing happens–the fungus turns the wood blue!

XYLOSANDRUS
Origin: Florida
Medium: Sweetgum
From the artist’s life: Originally from Asia, this beetle is taking over the world. Hitching rides on trans-oceanic ships and rapidly colonizing new regions, the beetle is now as abundant in your backyard as in its native jungle. This fuzzy little traveler is a biological invader, a victor in our globalized world.

PHLOEOSINUS
Origin: The American Sun Belt
Medium: Bark of juniper
From the artist’s life: The juniper beetle loves the sun. From the steamy flatwoods of Florida to the parched Sonora desert, Phloeosinus follows the scent of resin wafting from dead junipers. It burrows into the shaded safety of the bark, carving out hieroglyphs of the sun.

STYRACOPTINUS
Origin: South Africa
Medium: Bark of Grewia
From the artist’s life: A monster from the African savannas. To us, perhaps ugly. To themselves, the most sexy thing with all the spines, scales and bristles. And why do they make tunnels in the shape of daisies? Nobody knows. What do you think?

SCOLYTUS RATZEBURGI
Origin: Europe, Russia
Medium: Birch bark
From the artist’s life: From the endless birch forests of Northern Europe and Siberia comes a mystery beetle. Why does the female make all those little windows as she slowly chews her tunnel? Perhaps to catch glimpses of the dim, cold, boreal sun.

HYLESINUS
Origin: Europe
Medium: Bark and wood of ash trees
From the artist’s life: Every dead ash tree turns into a city. Hundreds of females land on the bark and dig wedding chambers in which to entertain males. Females quickly create two-winged dwellings (each looks like a flying bird) and eggs are laid inside. Then larvae hatch. Thousands of little mouths start chewing and bodies worming forward, each squeezed between busy neighbors. Put your ear on the bark, it’s bustling in there.

EUWALLACEA
Origin: East Asia
Medium: Inside the trunk of many types of trees
From the artist’s life: Imagine being the only son in your family. You are blind, tiny, wingless. You hatched deep in the tunnels and will never meet your mother. You are the clone of her genome, so you have no father. You have thirty sisters, or more, you don’t know, they just come and go, all you know is that you have to mate with all of them. And then you die, never having seen the sun. That’s the life of all Euwallacea males. Like the little brown guy on the picture.

TRYPODENDRON
Origin: USA
Medium: Wood of many different trees
From the artist’s life: Trypodendron are some of the prettiest bark beetles. But it is their family life that sets them apart: each baby develops in its own cradle, and eats not wood, but an ambrosia fungus–yes, food of gods. Do you see the stain around each hole? That’s the fungus, digesting the wood and bringing nutrients to the babies.

SCOLYTUS MULTISTRIATUS
Origin: Europe
Medium: Bark and wood of elm trees
From the artist’s life: Also known as the Smaller European Elm Beetle, this tiny insect made big headlines during the 20th century. It brought a pathogen from Europe that killed American elms. Millions of dead elms, one of the biggest epidemics of tree death ever recorded: Dutch elm disease.

Origin: Florida
Medium: Bark of southern pines
From the artist’s life: Ips calligraphus–the “worm of beautiful writing” in Latin–inscribes each family’s story into bark. This one was started by the father, who lived in the small chamber right in the middle of the carving. He kept two wives, but they, unhappy about the arrangement, began drilling in opposite directions. Each laid a myriad of eggs, and their children expanded two separate wings of the labyrinth, never to meet the others.