No one is more surprised than Austin Bell that he has become the foremost authority on the Key Marco Cat, one of the most enigmatic artifacts of indigenous North Americans. His new book, The Nine Lives of Florida’s Famous Key Marco Cat, being released in September, is described by Torben C. Rick, Curator of North American Archaeology, Smithsonian National Museum of Natural History, as, “An outstanding book on one of North America’s most iconic artifacts.”

The Cat is part of the Key Marco collection of artifacts excavated by Frank Hamilton Cushing in 1896 not far from the Marco Island Historical Museum where Bell serves as curator. The Cat and other artifacts have resided at the Smithsonian, while other artifacts from the collection have been cared for at the Penn Museum and the Florida Museum of Natural History (FLMNH), parent organization of the RRC.

In 2009, Bell was hired as a curatorial assistant and given the task of creating a collection inventory of the FLMNH’s Key Marco holdings by Karen Walker, RRC Co-Director and FLMNH Collections Manager for South Florida Archaeology and Ethnography. The work transformed Bell’s life as he changed his focus from aerospace engineering to graduate work in Museum Studies. Following graduation, in 2013 Bell began working with the Marco Island Historical Society to bring the Cat home, temporarily, to its place of origin.

He describes being “awestruck, even emotional” when he first saw the Cat in 2014. “I found myself holding my breath, not wanting to breathe on the object for fear of somehow damaging it. I didn’t even hold it in my hands when offered the chance, although I did on a later visit, having regretted the missed opportunity.” To him, the Cat represents a significant and timeless work of art. “The Cat is simultaneously familiar and foreign, likely inspired in-part by the recognizable Florida panther, but created by a culture so distant that all we know about it comes from archaeology and limited ethnohistorical records. And it looks like it could have been carved yesterday. Its preservation is so remarkable that it is hard to comprehend that it was likely carved using shark-tooth tools more than 500 years ago.”

His admiration extends to Frank Hamilton Cushing, who excavated the Key Marco site in 1896, noting that Cushing was multifaceted in his skills and talented in an ability to describe landscapes as they were in the past. What Bell describes as Cushing’s “empathy to his subjects” and “sincerity in his communications” are traits he emulates in his scholarship.

Before A.D. 1300, the Key Marco site was in the area occupied historically by the Muspa, but sometime after, the Muspa were allied with and probably under Calusa control. In the book, and the exhibit at the MHS, Bell explains the basic differences in pottery styles that set apart the Muspa from the Calusa. However, he carefully presents the artifacts as either Muspa or Calusa due to uncertainties that have arisen related to dating the materials.

He points out, “It’s important to be forthcoming about what we don’t know (which is a lot) while giving credit where it is due, which in the case of the Key Marco artifacts, may well be with the Muspa and not the Calusa, as is often automatically assumed.” A full chapter is devoted to the fateful day(s) in which the Key Marco artifacts were deposited into the muck, left there by their creator(s) to be unearthed centuries later. Various theories and explanations are detailed by Bell who explains that the scenarios depend on just when that fateful day occurred.

Having the Cat and other items from the Key Marco collection at the MHS has been a significant experience for the local community and visitors. Many people comment on the Cat’s small stature, according to Bell, who also describes people in tears as they see the object. “People on Marco Island, the Cat’s place of origin, are so proud to have it back on loan. It has really become a symbol of local identity here, emblazoned on street signs and all sorts of local merchandise. The fact that it is on loan from the Smithsonian Institution brings with it a cachet that really speaks to peoples’ perceptions of our little museum, instilling further pride in the community it serves. In 2019, the first year of the Cat loan, we broke our annual visitation record after a little more than three months, which really showed us the Cat’s amazing power. While numbers aren’t everything, museum visits are proven to improve general wellbeing and quality of life, and the fact that we can provide those to more people in the community than usual is thanks largely to the Cat.”

The Nine Lives of Florida’s Famous Key Marco Cat promises to further highlight the significance of Southwest Florida’s indigenous people, the legacies that can be discovered with careful research, and the importance of Native American art to today’s people. All of us at the RRC congratulate Austin on his new book and look forward to offering it for sale in our RRC Gift Store. 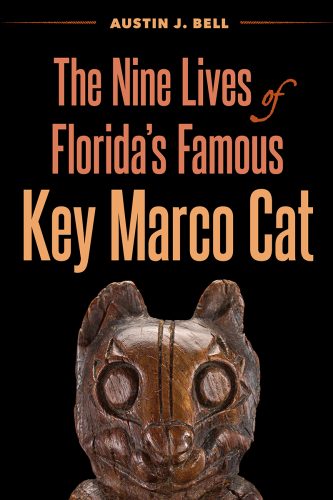 Pre-order the Nine Lives of Florida’s Famous Key Marco Cat, hardcover, $26.95, from the University Press of Florida. It will be available at the RRC Gift Store after September.

To see digital photographs of some of the artifacts in the Key Marco Collection at the Florida Museum.

For further information about the Key Marco Collection, see: