A Tour of the Islands of Pine Island Sound: A Geological, Archaeological, and Historical Perspective

Captiva Island is a barrier island of Pine Island Sound, connected to Sanibel Island by a bridge across Wulfert Channel. Captiva Island is approximately 4.5 miles in length but before 1921 when a hurricane blew out Redfish Pass on the northern tip of Captiva Island, it was nearly twice as long and encompassed all of today’s North Captiva Island.

Captiva Island is a geologically dynamic barrier island. For fifteen centuries the island has been connected and divided; lengthened and shortened; thinned and widened. Its width of less than one-half mile, and its emergence as an island depended on continuous wave action as opposed to tides and currents. Today the wave action is erosional at the north end and depositional at the south end at Blind Pass. 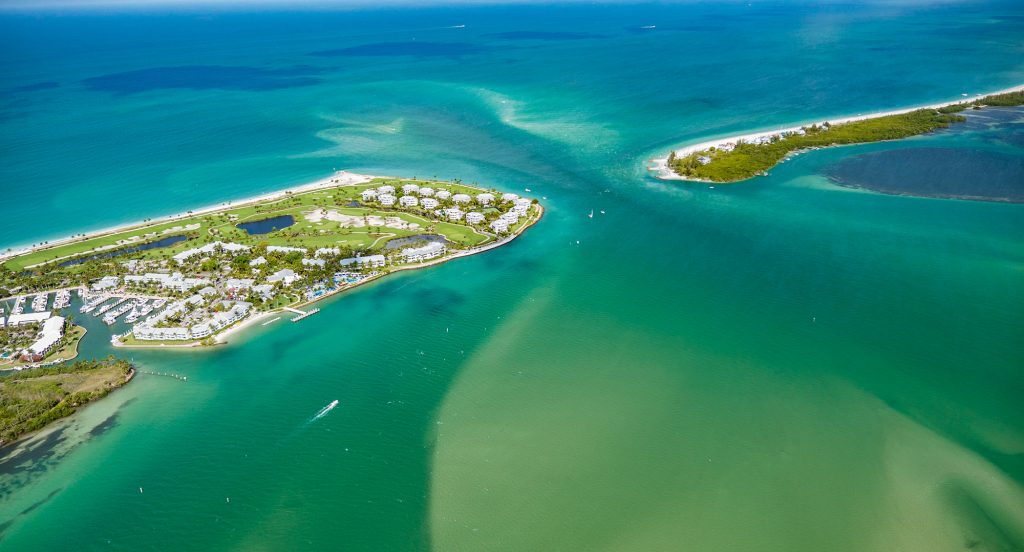 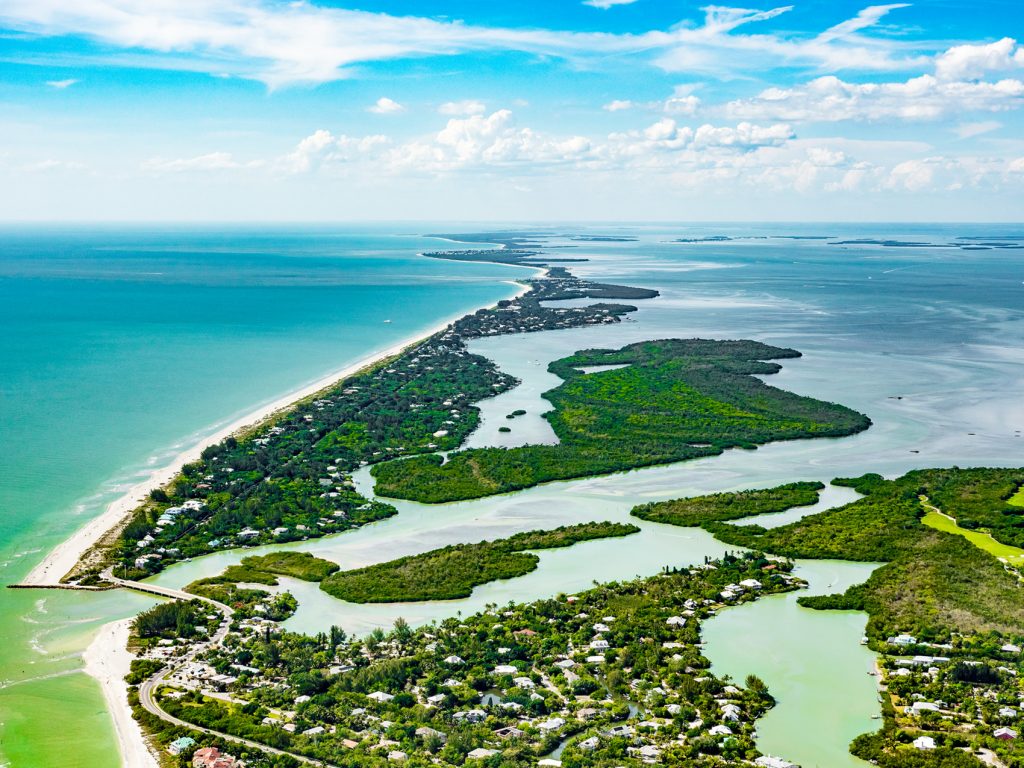 Captiva Island, left, and Buck Key, right center. In the foreground is the western tip of Sanibel Island and the Sanibel-Captiva bridge spanning Wulfert Channel. Photo by R. Mayhew

The surface of the island has no measurable beachridge sets dating before A.D. 450. However, there is evidence of deposition of geologically reworked shells from earlier time intervals going back three thousand years. A “reworked” shell is one that eroded from an existing deposit, was transported an unknown distance, and was then incorporated into a different sand and shell deposit.

The northern part of Captiva Island supports parallel beach ridges of a type with one end attached to the land and the other projecting into the sea or across an old inlet. This type of sand spit is the result of direct onshore sediment transport in addition to southward longshore sand transport. These ridges have elevations below five feet, were deposited before A.D. 850, and they are contemporaneous with the beach ridges on Buck Key (A.D. 450-850), which is parallel with Captiva Island’s southern half. Corresponding with this time of deposition are indigenous shell middens, made by people, upon the northern third of today’s Captiva Island, and upon the northern third of Buck Key.

Geologists state that no earlier than A.D. 1350 accumulated sand, shell, and beach ridges on the southern part of Captiva Island forced the waters of the sound to exit southward through Roosevelt Channel east of Captiva Island, west of Buck Key, and exit due south into Wulfert Channel near Blind Pass.

In 2005, archaeologists mapped multiple shell middens exposed by Hurricane Charley on the estuarine side at the northern end of Captiva Island. The landform on which the archaeological site existed was a peninsula about 360 feet wide, extending from north to south approximately one mile into the bay.

One of the shell middens is a bifurcated mound. The bifurcation is a gently sloping valley of shells providing a pathway to each of the mounds. A third shell mound rises sixteen feet above sea level. A low, bowl- like depression in the lower part of one shell mound holds clear water. Preliminary data based on potsherd types and shell tool forms suggests that indigenous people lived there during the Caloosahatchee I period (500 B.C. to A.D. 500) and perhaps long after.

About one mile south of the previous location, the Chadwick Mound is represented by two separate shell midden mounds. The southern mound is teardrop shaped and is about 525 feet north to south, 330 feet east to west, and 16 feet in height. About 100 feet north is a smaller linear shell feature extending north to south about 56 feet with an average width of 33 feet, and a maximum height of only three feet. The site is the second largest on the barrier islands in terms of volume and appears to have been an ancient village site.

A burial mound on Captiva Island and a non-burial shell mound were explored in the winter of 1927-1928 by Henry B. Collins of the Smithsonian Institution. The non-burial site consisted of gradually accreted middens with an associated trench or canal. Collins observed how the burial mound was surrounded by a wall made of large shells, and included flexed burials (knees and elbows bent), primary burials, and secondary burials. A “secondary burial” is one that has been relocated from its original place of interment.

Archaeologists believe the burial site dates to the Caloosahatchee IIB period (A.D. 800 to 1200) with continuous use over time, and that it contained no grave goods except for the placement of potsherds around the skulls. In 1996 the burial site was placed on the National Register of Historic Places. Today it is protected by Florida Statute 872.02, which prevents disturbance of unmarked graves.

This article was taken from the Friends of the Randell Research Center Newsletter Vol 18, No. 1. March 2019.