February 23rd was the annual Calusa Heritage Day, hosted by the Randell Research Center at the Calusa Heritage Trail in Pineland. It was a great day weather-wise, and the many participants had a great time sharing their knowledge with the public.

Over 1500 people attended. Dr. Karen Walker and Dr. Bill Marquardt of the Florida Museum of Natural History and the RRC drew together an amazing array of talent for the event. In the classroom, archaeologists from the museum had display tables reflecting different aspects of the archaeology of the Pineland site, including zooarchaeology and archaeobotany displays by the Florida Museum’s Irv Quitmyer and Donna Ruhl. Melissa Ayvaz and Ryan Van Dyke had tables explaining the importance of artifact and zooarchaeological curation. On the deck outside, local author D.L. Havlin entertained the crowd with tales from Florida’s cracker days, Gladys Schneider and Gina Poppell explained the history of the Ruby Gill House and Pineland Post Office, and Steve Tutko manned the RRC membership table.

An entire area of the site near Brown’s Mound was set aside for artists and primitive technology demonstrations. Merald Clark, noted artist and illustrator who produced the striking images seen on the Trail’s interpretive signs, participated, as did artists Sue Ellen Hunter, Hermann Trappman, David Meo, Dorothy Looney, Helen Donvan, Pat Townsend, and Denege Patterson. Elizabeth Neily talked to visitors while dressed as a 16th-century Spanish market woman. Calusa pottery technology was taught by noted author Robin Brown, assisted by John Beriault and Stacey Brown. Firing of the pots took place at the site a week later, on Saturday, March 1, under the supervision of John Beriault. 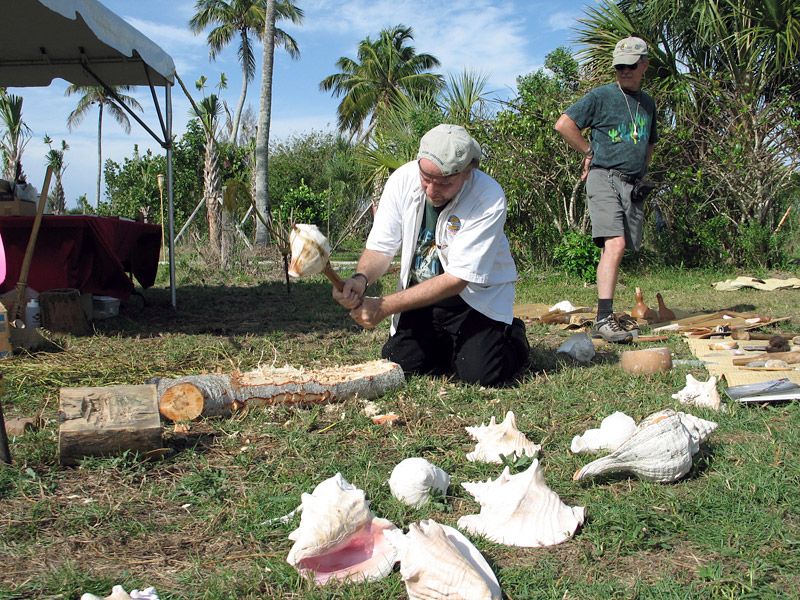 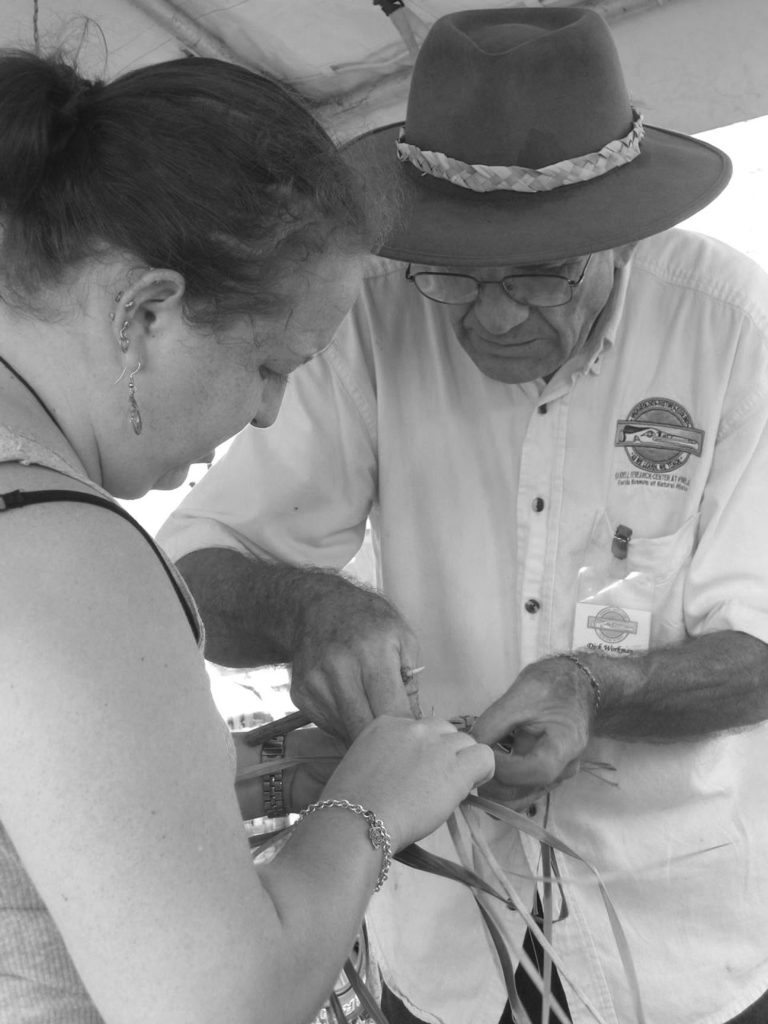 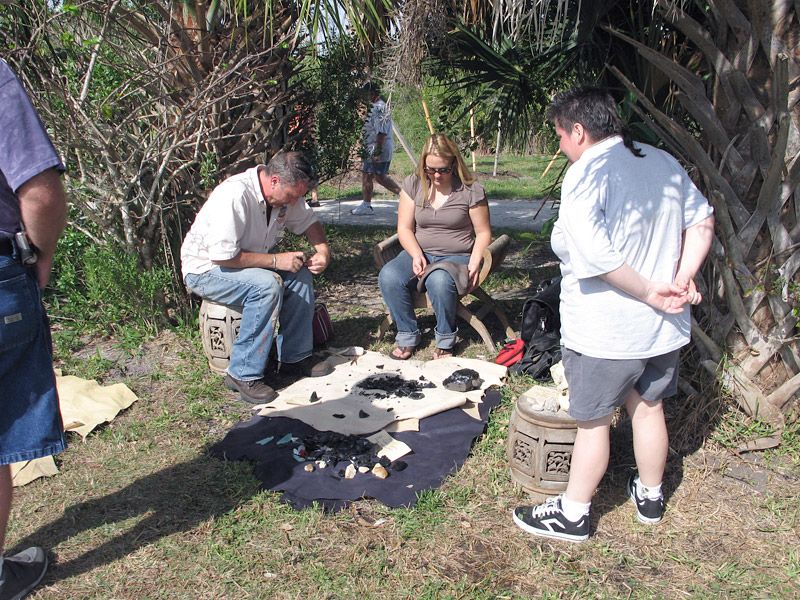 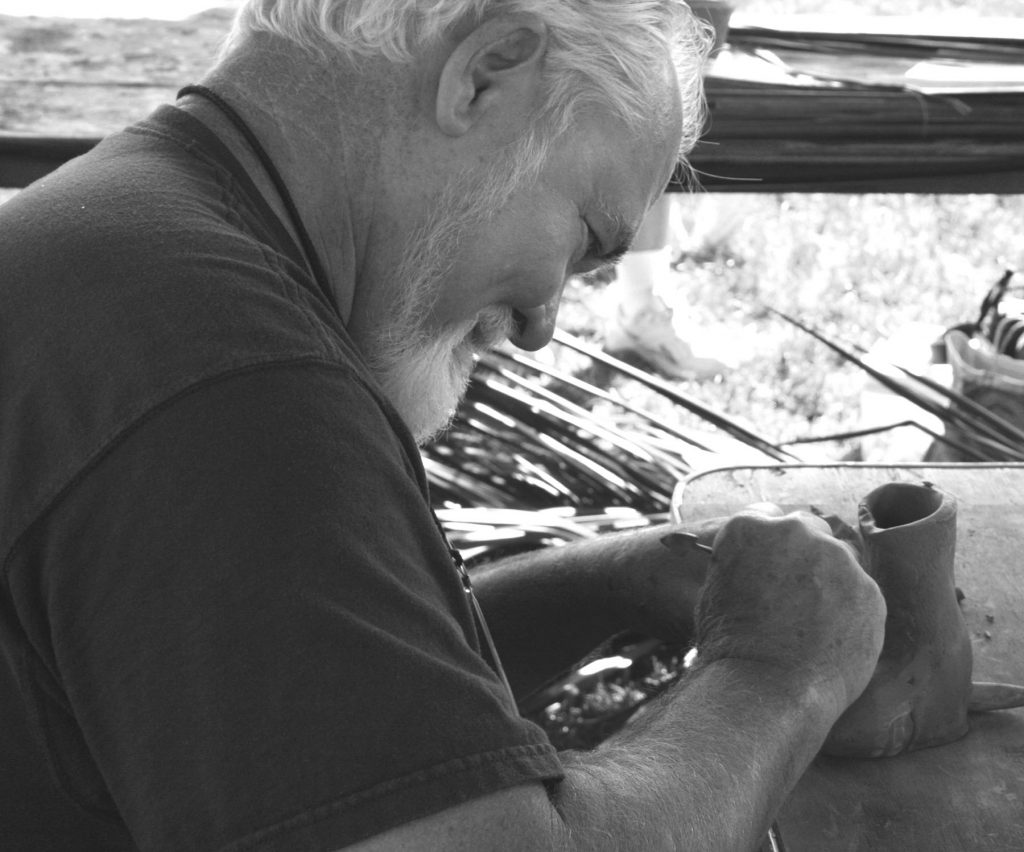 John Beriault uses a hand tool to decorate the pottery he is making. Photo by M. Nanney 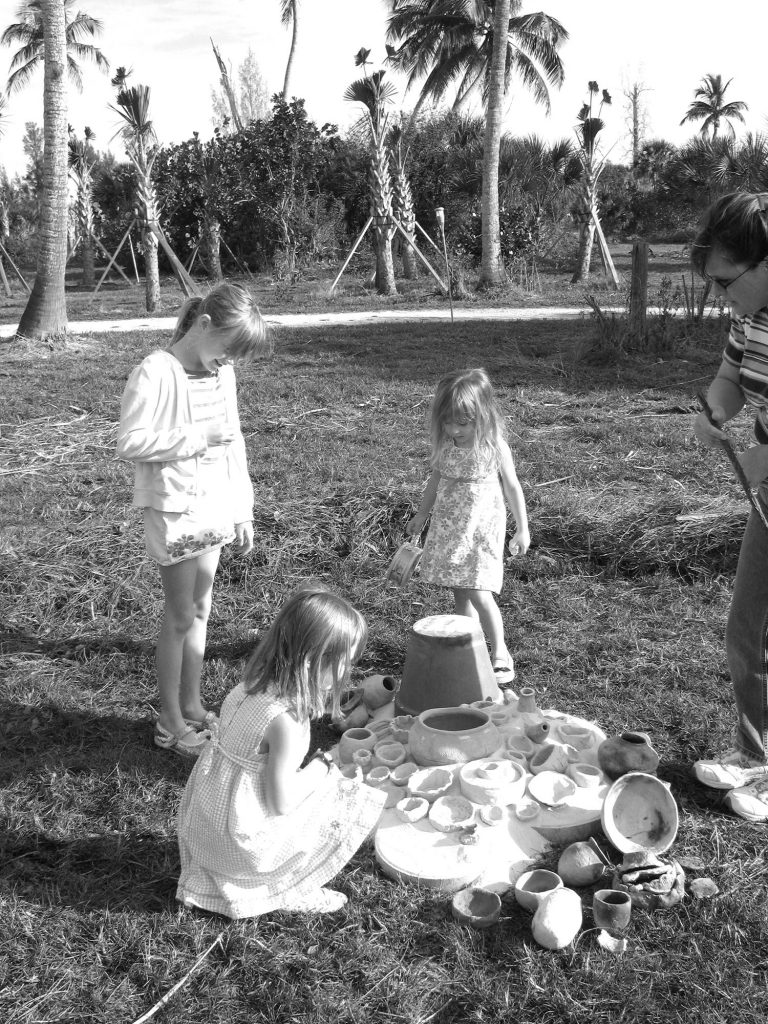 Just before the fire is to be lit, the Lazenby sisters – Jennifer, Emily, and Barbara Ann – say goodbye to the pots they made and wish them well in the firing, as mom Laurie looks on. Photo by W. Marquardt 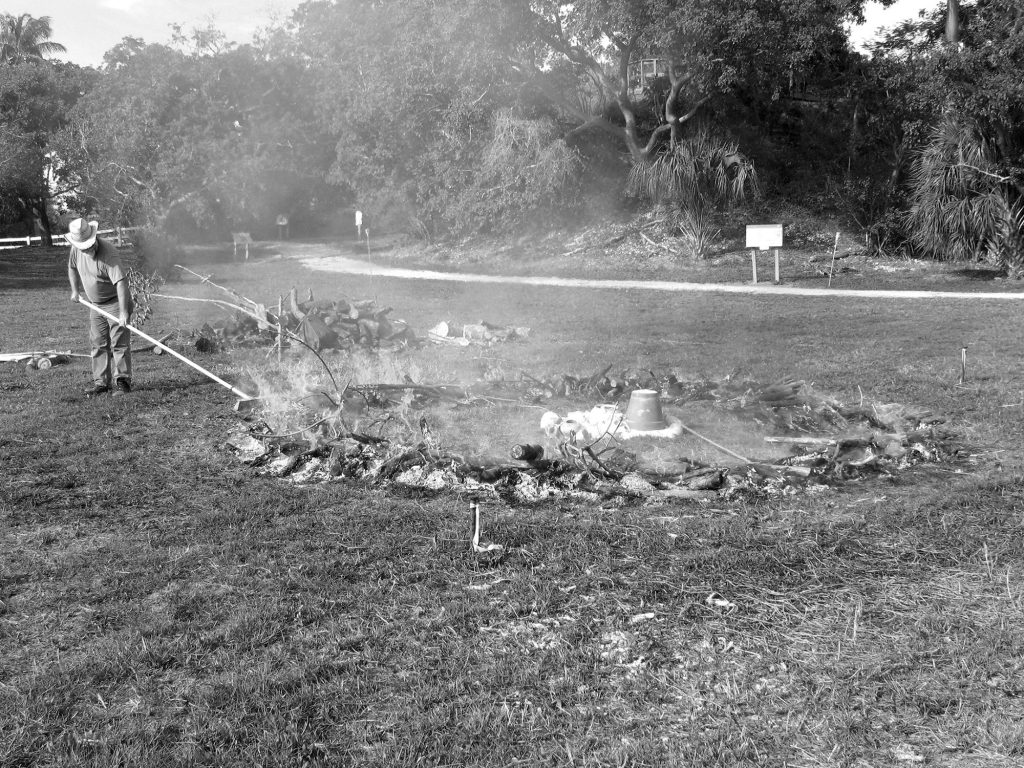 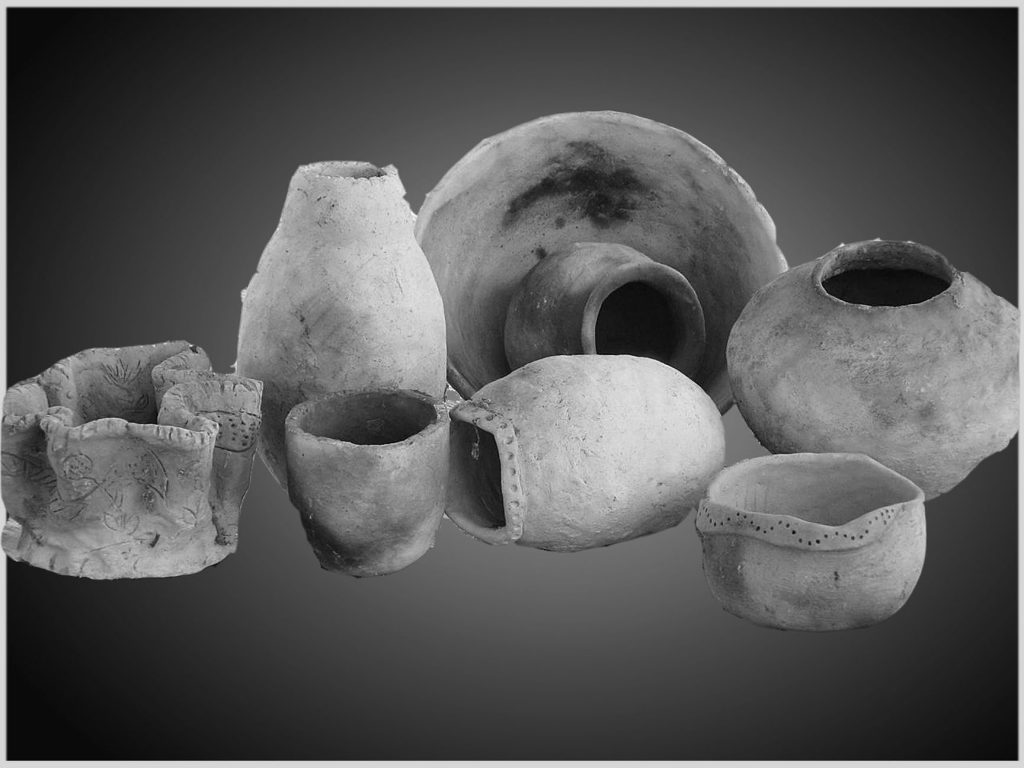 A selection of some of the many pots made by visitors during Calusa Heritage Day. The pots were fired March 1 and can be picked up at the Calusa Heritage Trail. Photo by R. Brown 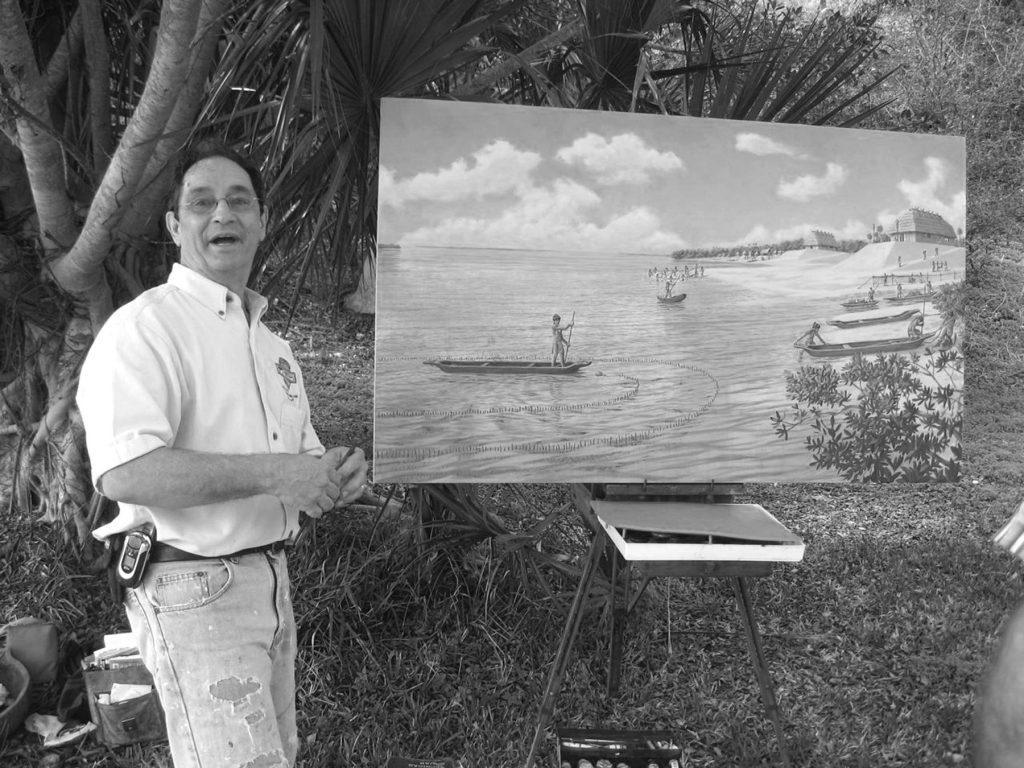 Artist David Meo discusses his in-progress painting of a scene from Pineland’s past. Photo by R. Brown

Dick Workman and Rick Tully demonstrated fiber technology and weaving, Terry Powell of St. Petersburg had an amazing display of Calusa shell and wood tools that he encouraged the public to try out. I demonstrated percussion flaking and pressure flaking of stone tools.

Mickey Miller showed everyone how to make fire without matches or a lighter. John Paeno explained his artifact replications, and metal artist Mike Bonne encouraged kids to hammer out their own metal “bait fish” to take home with them. Atlatls were thrown with assistance from Dick Hunter and José Langone, tools and baskets and cordage were made by visitors, conch horns were blown, and a good time was had by all. There were even Calusa “snacks” available: grilled mullet, local clams, oysters, and fresh papaya, all of which were on the Calusa menu.

There were also ten local environmental and eco-tourism organizations set up along the trail, and local captain Brian Holaway of Relax and Explore Toursoffered a four-hour boat trip to be raffled off. Tropic Star of Pine Island gave away a boat trip as well. At 2:00 P.M., Dr. Marquardt gave a talk on “Calusa Archaeology Since Cushing” to a packed classroom, with many people hanging into the doorways to hear the talk.

The entire anthropology staff from Florida Gulf Coast University was in attendance, as well as Paul Backhouse and Marion Smith, archaeologists for the Seminole Tribe of Florida. For those others of you who attended, thank you for your support; for those of you who did not, plan to be here February 21, 2009 for the next Calusa Heritage Day. It is a great way to spend a day “doing archaeology.” 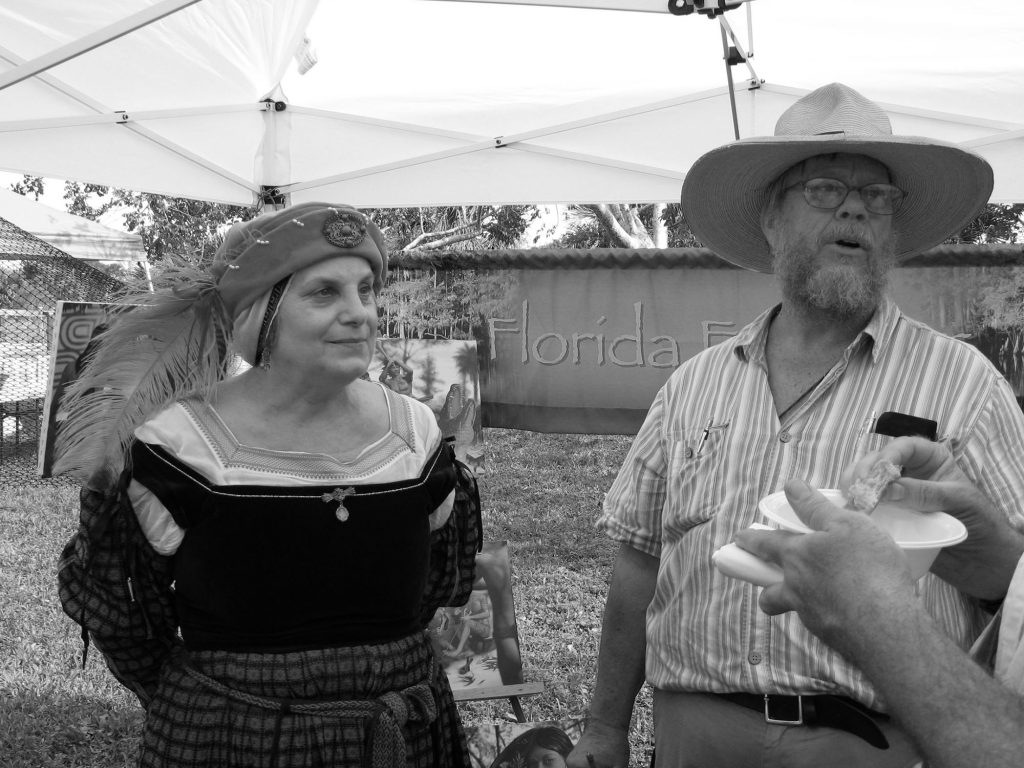 Elizabeth Neily, dressed as a 16th-century Spanish market woman, and artist Hermann Trappman, dressed as himself, talk with visitors. Photo by C. Moncrief 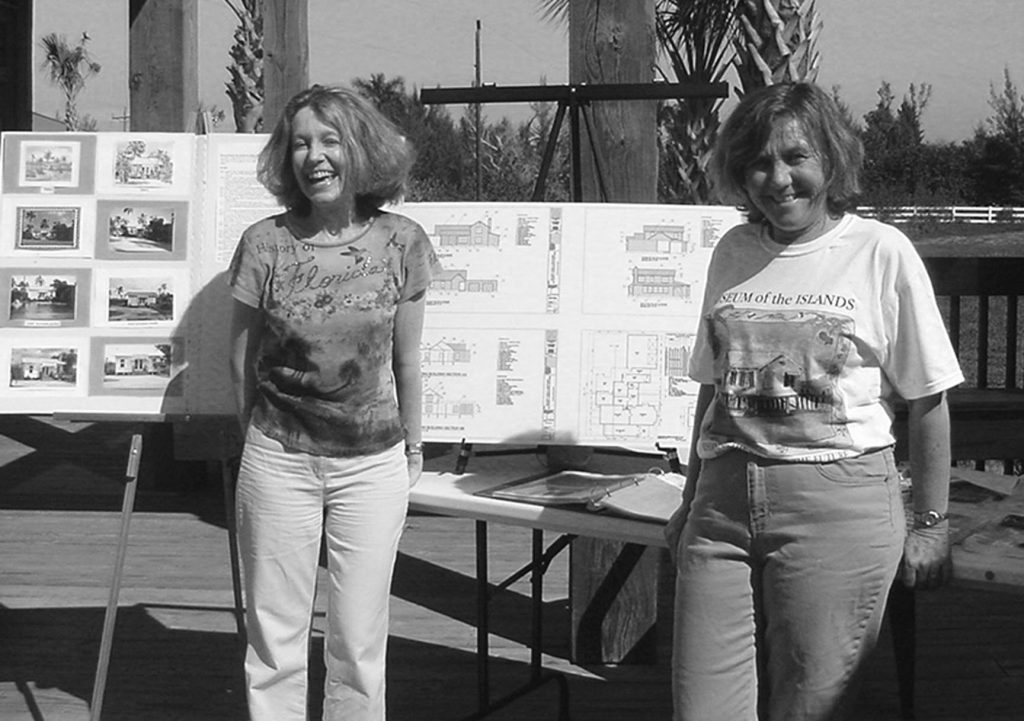 Linda Stevenson (left) and Gladys Schneider visit at the exhibit on the Gill House prepared by Gladys and postmaster Gina Poppell. Photo by G. Sajgo 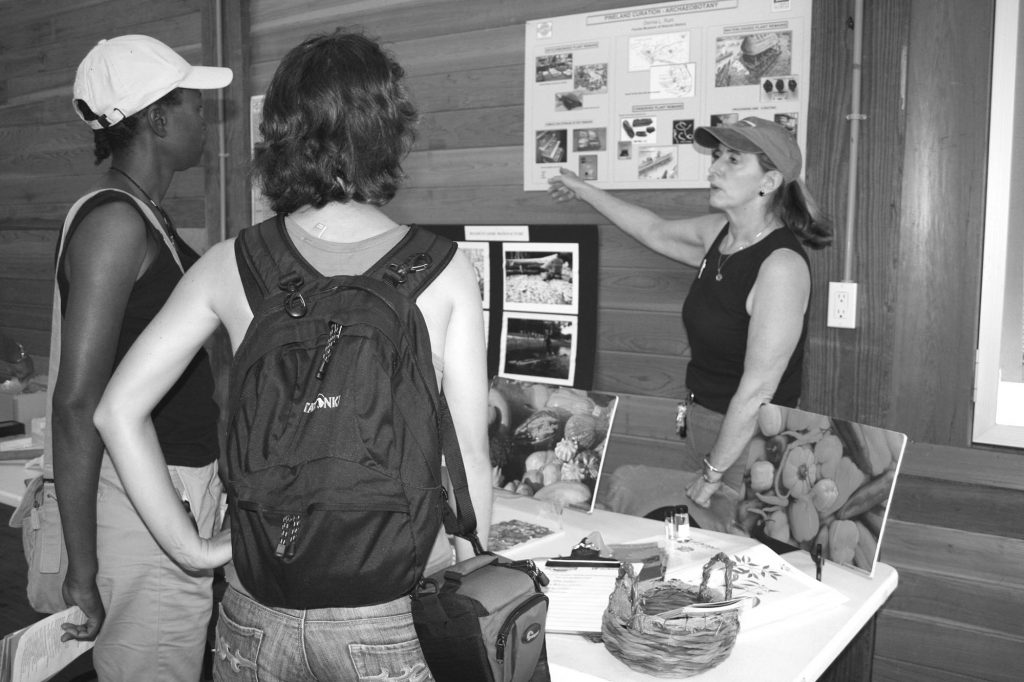 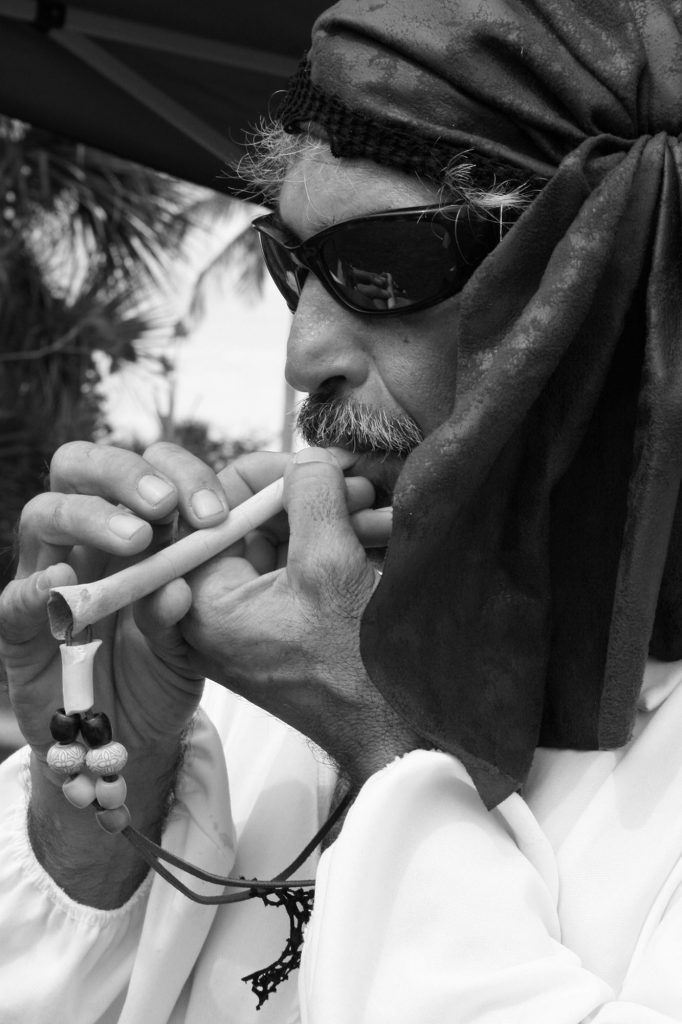 John Paeno plays a tune on a bird-bone whistle he made. Photo by M. Nanney 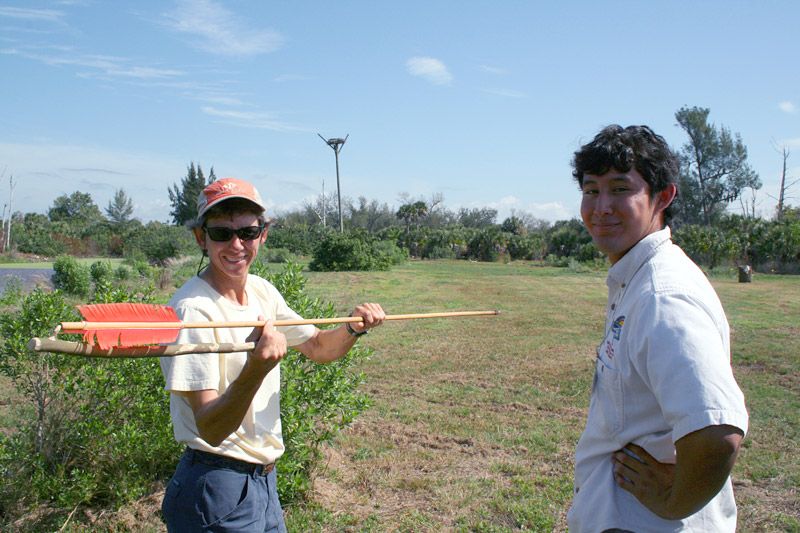 Mickey Miller lines up a dart on the atlatl (throwing stick) in preparation for throwing it at the target, while José Langone provides encouragement. Photo courtesy of M. Nanney 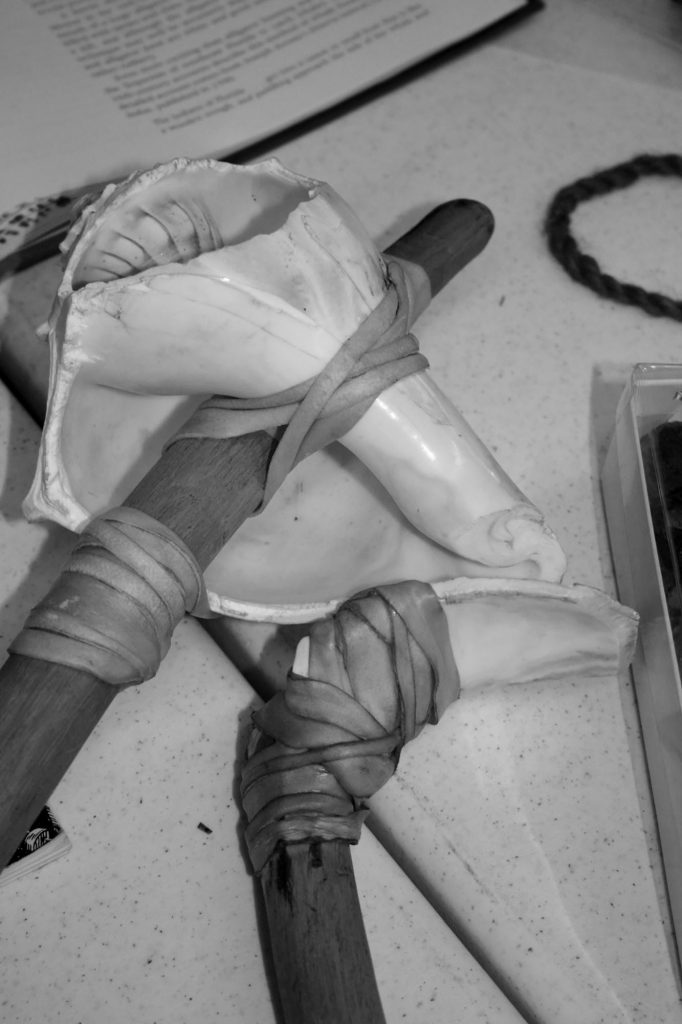 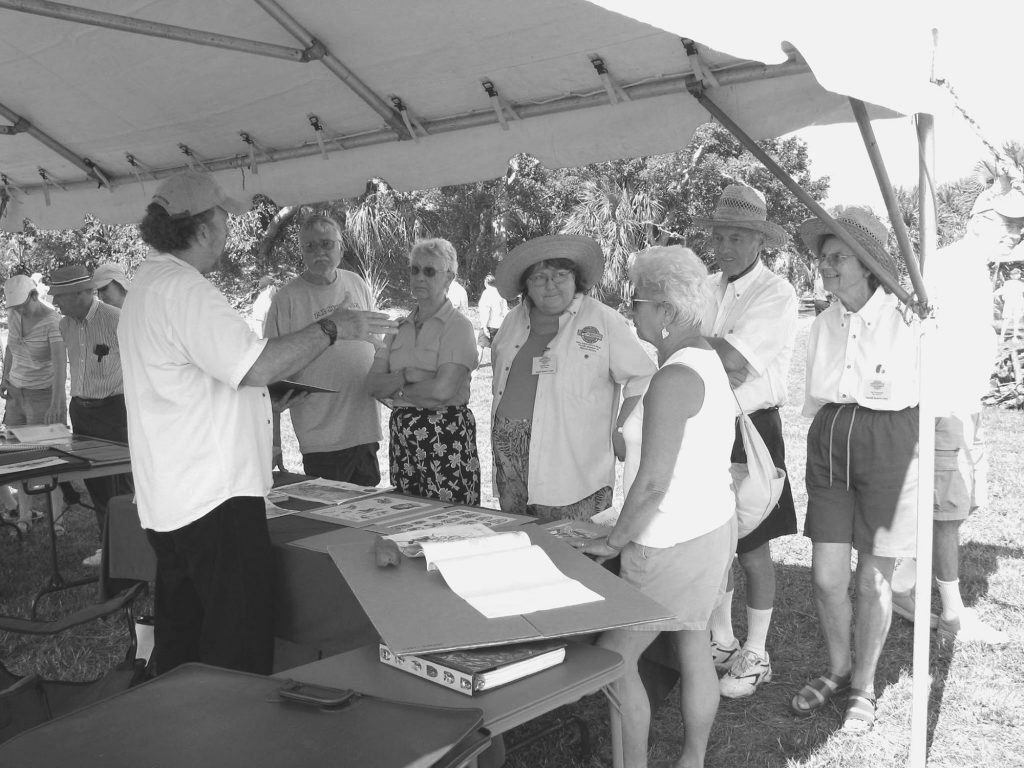 At the artist’s tent, Merald Clark explains how he went about visualizing the Calusa. Photo by C. Moncrief

This article was taken from the Friends of the Randell Research Center Newsletter Vol 7, No. 1. March 2008.