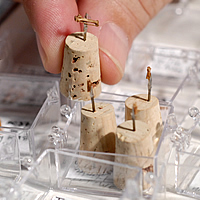 This collection of 24,500 specimens, representing about 3,000 species, is approximately fifth largest in the world in number of specimens and species. In 1992, the Florida Museum received the Recent bird skeleton collection assembled by Prof. Pierce Brodkorb of the University of Florida’s Department of Zoology. With the assistance of an NSF collection improvement grant, this skeleton collection was computer-cataloged and integrated into the Florida Museum bird collection (already computerized in 1992-1994). The skeleton collection has grown by 140% in the last five years. It contains specimens from 47 U.S. states and 103 countries. The top ten states are: FL with 11,169 specimens; CA with 638; ME 227; MA 218; GA 213; AK 201; NY 154; TX 142; AZ 140; VA 124. The top ten countries are: US 13,282; Mexico 745; Netherlands 397; Costa Rica 320; Kenya 312; Panama 252; Zimbabwe 217; Suriname 213; Canada 198; Australia 124. Taxonomically the collection ranges across the class Aves, representing 23 orders, 128 families, and 950 genera. 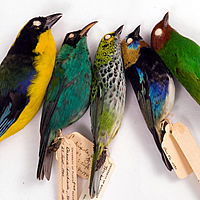 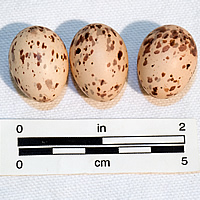 The egg collection, consisting of 10,400 sets representing 733 species, is 11th largest in North America in number of sets and 15th largest in number of species. It represents approximately 90% of the species and subspecies of North American birds. The egg collection has grown by 1% in the last five years. It is cataloged in a card file that includes original collectors’ data slips or page references to the collector’s field notes. Especially well represented are sets from New England and Florida. The collection is rich in sets of raptor eggs, including Bald Eagles, Ospreys, Broad-winged Hawks, Red-shouldered Hawks, Crested Caracaras, and American Kestrels, and the Florida races of Seaside Sparrows and Clapper Rails. Rarities include sets of Passenger Pigeon, Carolina Parakeet, and Bachman’s Warbler eggs. The egg collection data have been entered in a database but it is not yet online. In the meantime you can download a list of the species in the egg collection. 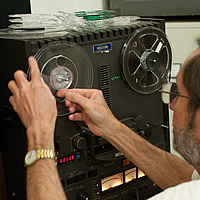 The bird sound collection, in the Florida Museum Bioacoustic Archives, with 27,500 cataloged recordings representing about 3,000 species, is perhaps third or fourth largest in the world in number of species. In the western hemisphere it is the second largest in number of species and third largest in number of recordings. We are now processing one of our largest accessions ever, the collection of Ben B. Coffey, Jr., with thousands of high-quality recordings from the southeastern USA and the Neotropics. The sound collection has grown by 20% in the last five years, not counting the Coffey accession. It is cataloged entirely on computer. Geographical strengths include North America, especially Florida, and the Neotropics, with smaller but notable numbers of recordings from Africa, Australia, and Southeast Asia. Some taxonomic groups especially well represented are tinamous, trogons, woodpeckers, antbirds, New World flycatchers, wrens, New World wood warblers, and corvids.

To request copies of these recordings in .wav format, write to the collection manager.

The Bird Sounds Collection Catalog on the FLMNH web site is not automatically brought up to date as we add recordings to our database. To see a partial list of recordings (about 4,000) digitized and cataloged, but not yet available on our web site, download this document. To request copies of recordings on this list, or any other recordings you think we may have, write to the collection manager.

Bird Sounds from the Highlands of Peru

Ian Ausprey and Felicity Newell are graduate students in UF’s Department of Biology, based in the FLMNH. From 2016 through 2019 they conducted extensive surveys of birds at elevations from 1800 to 3100 meters in the Dept. of Amazonas, Peru.  The habitat there is cloud forest, a variety of other vegetation types derived from it by human modification, pastures, and cropland. You can read more about their work here: https://www.floridamuseum.ufl.edu/ordway-lab/staff/

As part of this study, Ian made audio recordings to help identify and document the presence of birds at each of many census points. This sampling method resulted in more than 20,000 instances of calling or singing by over 190 species of identified birds. The sample is strengthened by the fact that many species appear in dozens of separate performances.

These recordings are available in an archive separate from our main animal-sound collection. You can search the contents of this archive for recordings of particular species and request copies of them.

Click here for an introduction to the study sites, survey methods, and recordings:

To request any of these recordings, write to Ian at iausprey@gmail.com and tell him which species you want.

American philosopher Charles Hartshorne (1897-2000) had a long association with former FLMNH bird curator Dr. Bill Hardy through their mutual interest in bird sounds. Prof. Hartshorne was a productive and highly influential scholar in his field of philosophical study, and also a serious lifelong student of birds and especially bird songs. Through his local field work, his travels, and his discerning study of audio recordings from around the world, he developed an unsurpassed knowledge of the whole Earth’s bird-song variety. Among the products of his inquiry were his widely discussed “monotony threshold hypothesis,” an explanation of why birds introduce variety into their singing performances, and his classic book Born to Sing, an Interpretation and World Survey of Bird Song (1973, re-issued in 1992).

Prof. Hartshorne bequeathed his ornithological papers to the FLMNH Division of Birds, and among them was the unpublished manuscript of his second book on bird song, Why Study Birds? And Other Essays. Out of this book I have selected several chapters to be presented here. We are pleased to present the first of these, “Nature’s ‘Universal Voice’: A Comprehensive Survey of Bird Song.”

For further information on any of these collections, or to arrange for examination of particular specimens, please contact the Collection Manager.