When Spaniards arrived in southwest Florida in the sixteenth century, they encountered a populous, sedentary, and politically complex society: the Calusa.

From several firsthand accounts of south Florida Indians written by Europeans, it is apparent that the Calusa were socially complex and politically powerful. Calusa influence extended over most of south Florida in the sixteenth century.

The Calusa were well established, with a population of several thousand. According to eyewitness accounts, in 1566 over 4,000 people gathered to witness ceremonies in which the Calusa king made an alliance with Spanish governor Menéndez de Avilés. The king entertained the governor in a building so large that 2,000 people could stand inside.

Artist’s conception of the Calusa encounter with Ponce de León in 1513. (Art by Merald Clark.)

Artist’s conception of the Calusa king’s house in 1566 (Art by Merald Clark.) 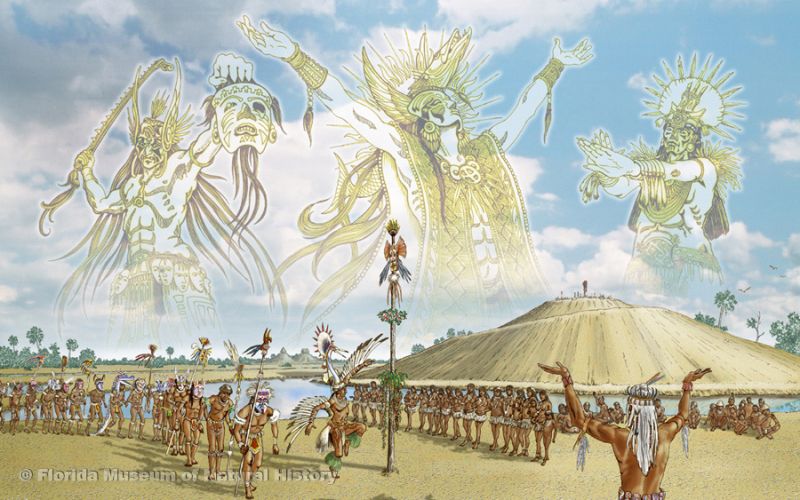 Calusa beliefs included a trinity of governing spirits. Rituals were believed to link the Calusa to their spirit world (Art by Merald Clark.) 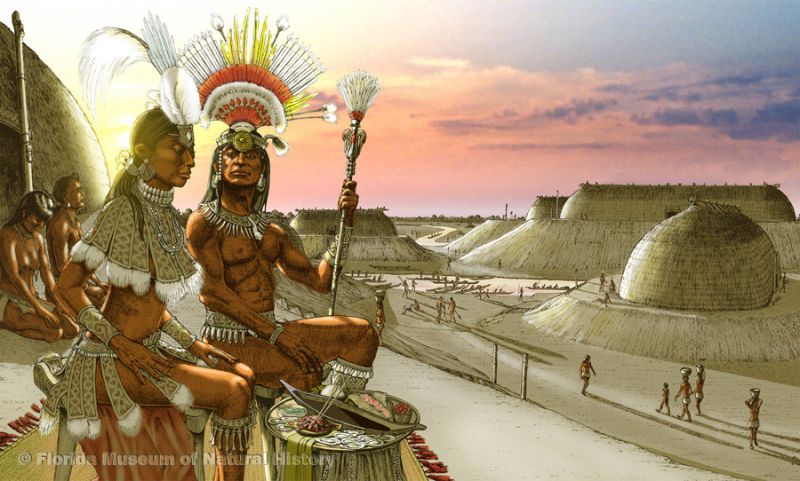 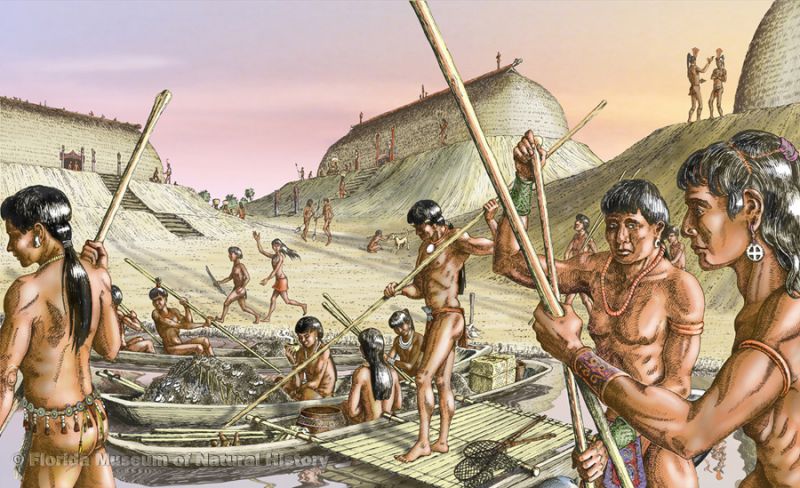 Artist’s conception of Calusa people preparing for fishing in the estuary (Art by Merald Clark.)

The Spaniards witnessed elaborate rituals with synchronized singing and processions of masked priests. Inside a great temple, they observed walls covered by carved and painted wooden masks. The Calusa king had the power of life and death over his subjects and was thought by them to be able to intercede with the spirits that sustained the environment’s bounty. Commoners supported the nobility and provided them with food and other material necessities. Towns throughout south Florida sent tribute to the Calusa king.

The level of southwest Florida political complexity is noteworthy because they depended for food mainly on fishing, hunting, and gathering. Although they probably kept small home-gardens, they raised no corn, beans, or manioc. Most complex societies depend on one or more staple crops and on the ability to distribute a surplus. We know from our study of both historical and archaeological data that the Calusa and their neighbors raised no such staple crops. How did the Calusa manage this unusual feat? One answer is found in the productive estuarine environment of the southwest Florida Gulf coast.