by Natalie van Hoose • March 9, 2020
Bulbs are a type of geophyte, plants with underground storage structures. Bulbs are highly valued in horticulture for their showy blooms, and edible bulbs such as garlic and onions are important crops. Public domain image by congerdesign

Botanist Cody Coyotee Howard compares bulbs to living bunkers. With an underground stockpile of resources, bulbs can hunker down during disasters and spring up faster than other plants when conditions turn balmy.

The bigger the bulb, the more nutrients a plant has in times of need. But bulb size varies widely, even among related species, from the chive’s barely-there below-ground organ to softball-sized yellow onions. Howard wondered why.

His curiosity led to one of the first studies of the evolution and ecology of bulb size. In an analysis of more than 2,500 herbarium specimens, representing 115 species, he found two ranges of “optimum” bulb diameter that seem to be driven by natural selection. He also observed that larger bulbs tend to grow in warmer, more stable climates – perhaps because filling a bigger bunker requires favorable conditions over a longer time.

Why does bulb size matter? Besides contributing to a plant’s ability to survive, it’s a key trait in the garden business and agriculture. Horticulturists know that a plant will reliably flower when its bulb reaches a certain size. Bulb size is also a vital characteristic in crops such as garlic and onions.

“If we understand the evolution behind variation in bulb size, maybe we could manipulate settings to make it work more in our favor,” said Howard, a recent University of Florida doctoral graduate in biology. “We do eat these structures, so understanding their evolution is important for horticulture and agriculture. They clearly have a role in how these plants respond to their environment.” 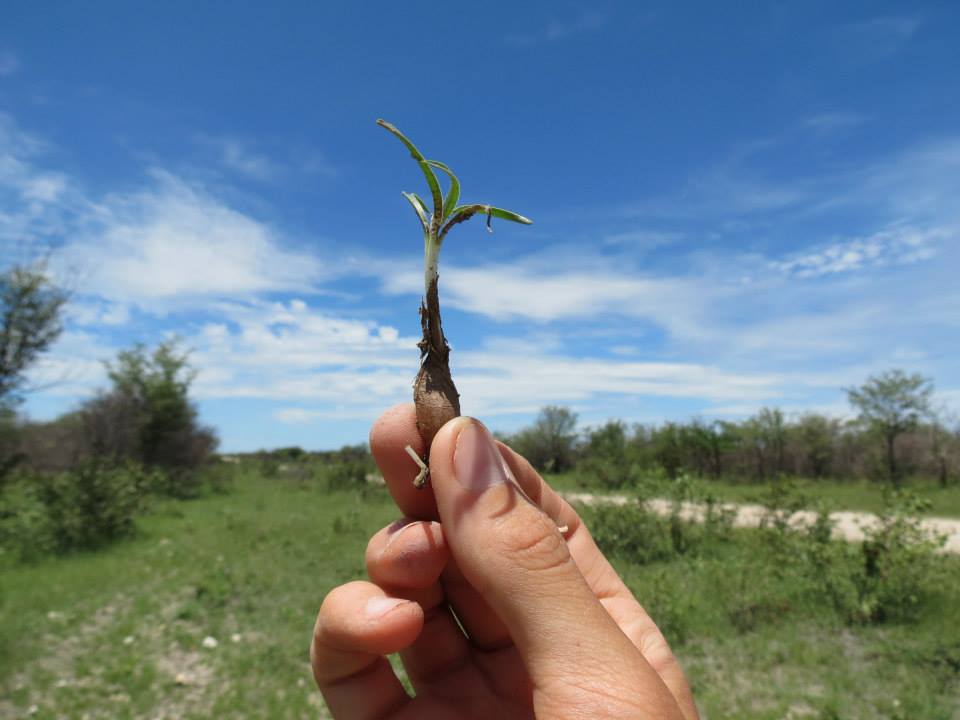 Botanist Cody Coyotee Howard wondered why bulb size varies so considerably, even among related plants. This small bulb belongs to a species of Ledebouria, a group of African plants. 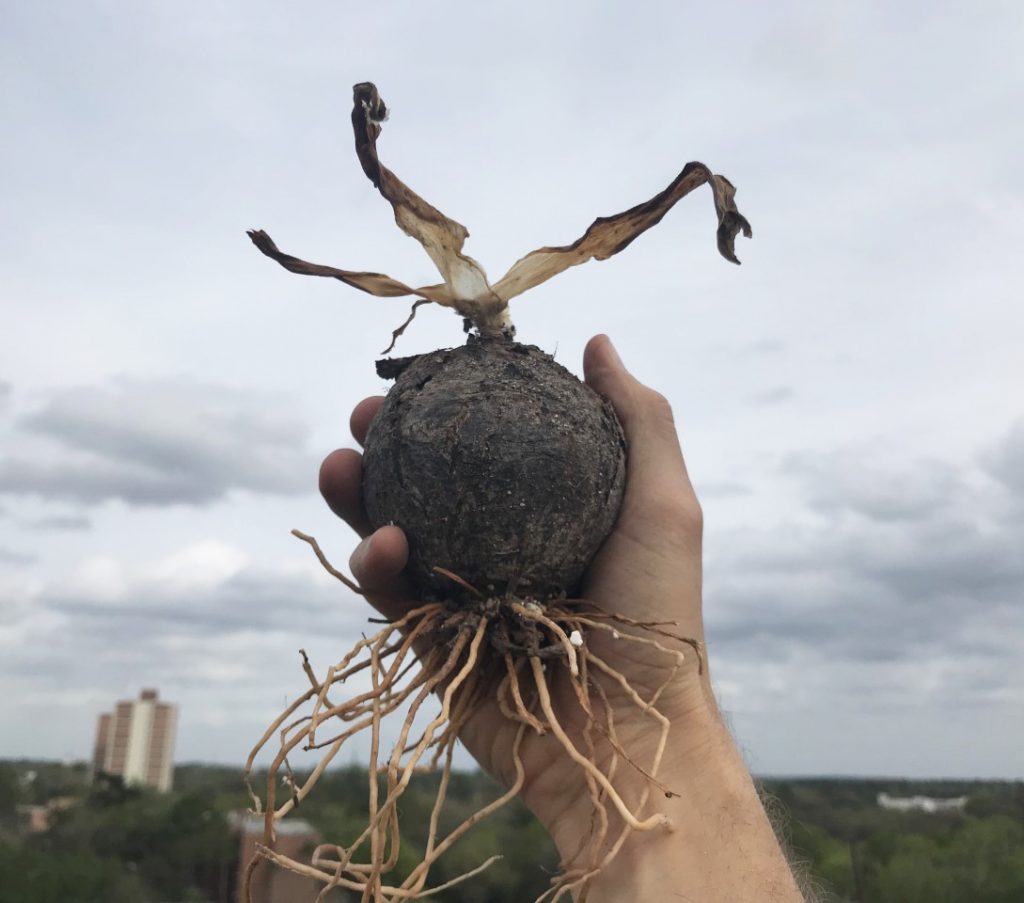 Ledebouria bulbs can also grow to be the size of softballs.

Despite living underground, bulbs are not roots, but a reduced stem surrounded by swollen leaf bases.

Howard became interested in bulbs while working at the Huntington Botanical Gardens in Southern California, where he admired the beauty of exotic bulbs from around the world. As a graduate student, he focused on Ledebouria, an African group of bulbs, and began studying bulb evolution more broadly.

He recalled digging up two Ledebouria species growing side by side in Namibia. To his surprise, the smaller plant with thin leaves had the bigger bulb.

“It’s not possible to predict bulb size by looking at the above-ground portion of a plant,” he said. “And here you had two members of the same genus with different bulb sizes. I was curious about why that might be and wondered how I could look at that on a big scale. Then it was like, ‘Ah, collections!’”

Howard relied on plant specimens collected by scientists around the world to carry out his investigation of bulb size. But although he analyzed thousands of plants, he didn’t touch a single specimen. Thanks to the ongoing digitization of museum specimens, he could access all the plants he needed from his personal computer.

After drawing up a list of target species, he downloaded digitized specimens from the Global Biodiversity Information Facility, an open-access biological database. He searched specimens for ones that included bulbs and randomly selected a set from each species to measure virtually with ImageJ, an image processing program. Howard generated models of optimum bulb size using a free analytical software called R, and examined how climate data correlated with bulb size.

Instead of a single bell curve for bulb size, as he expected, the model showed two, suggesting that natural selection may favor two ranges of bulb diameter: peaking at about 2 and 4.5 centimeters.

Plants that grow leaves and flowers at separate times also tended to have bigger bulbs, possibly because they depend on their underground resources, rather than growing conditions, to fuel flower production, Howard said. 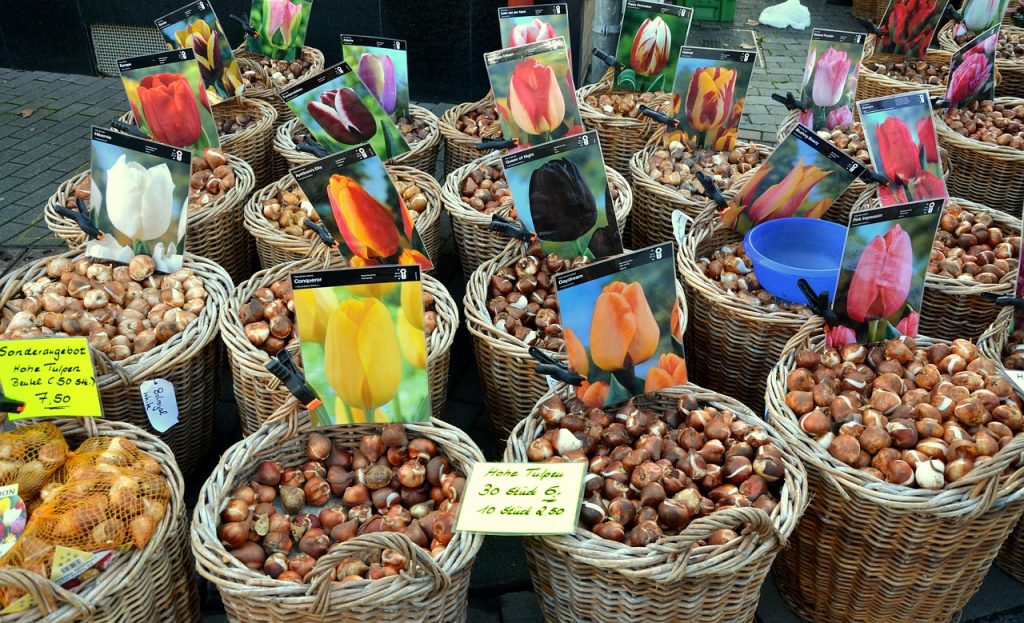 Bulbs are so prized by gardeners that they were responsible for the collapse of the world’s first speculative bubble, caused by a rush for tulips in the Netherlands during the 17th century. 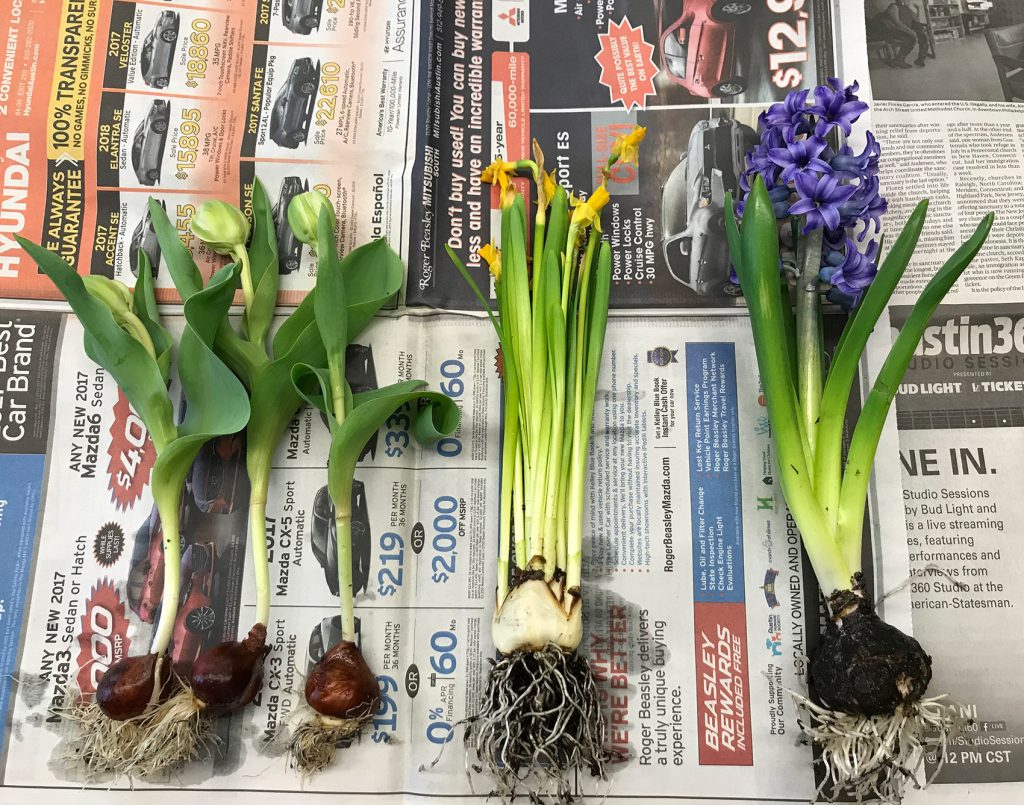 The bigger the bulb, the better the bloom quality. Three common bulbs in the nursery business are tulips, left, daffodils and hyacinths. 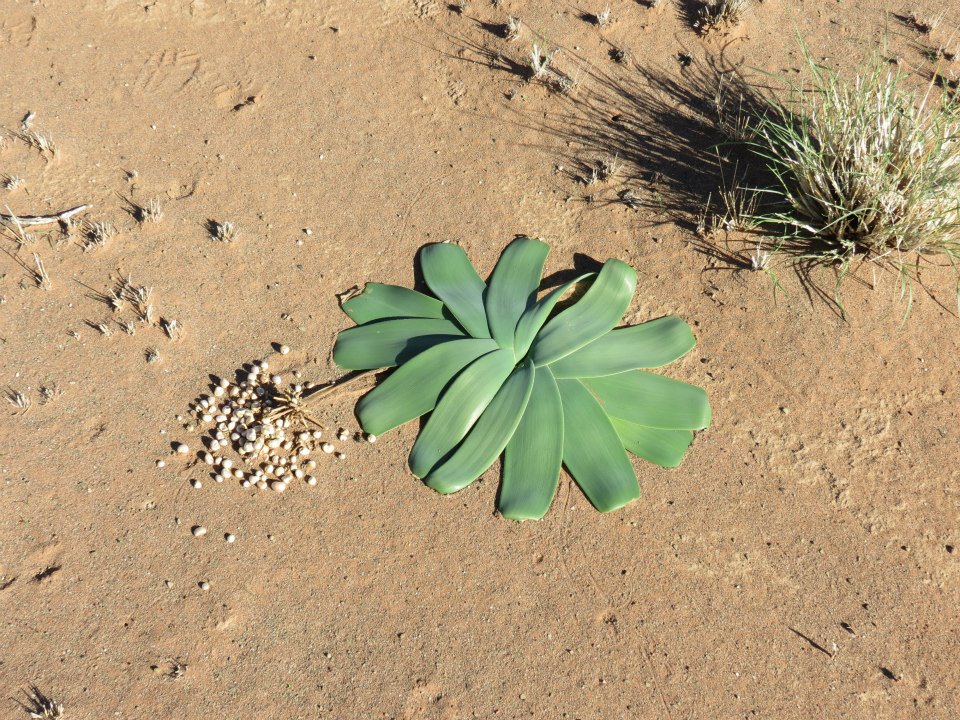 Ammocharis coranica, the karoo lily, displays a common competitive strategy used by bulbs to edge out competitors: spreading its leaves to prevent other plants from germinating in the same space.

What began as a side project shined new light on the evolution and ecology of an important but often overlooked plant trait.

Plus, Howard said, “this project didn’t cost me anything. People have developed free, user-friendly platforms that make it easy to start answering broadscale questions.”

Howard’s adviser and study co-author Nico Cellinese, Florida Museum of Natural History associate curator of the UF Herbarium and informatics, said the study “epitomizes the importance of herbarium specimens in general, but also demonstrates how digitized, freely available material can inspire and spearhead studies that lead to interesting results and new perspectives in science.”

One plea Howard issued to fellow researchers was to include bulbs when collecting and curating plant specimens. In his search for eligible specimens, he turned up many herbarium sheets with leaves and flowers – but no bulb.

“It’s understandable. With trees and shrubs, you can just take a few clippings. Getting a bulb is a much more involved process,” he said. “But I wouldn’t have been able to do a study like this if someone hadn’t collected the entire specimen. We need these structures to be able to fully understand not only bulbous plants, but others with fascinating below-ground structures.”

The researchers published their findings in Ecology and Evolution. The study is open access, thanks to partial funding from the Open Access Publishing Fund from the UF George A. Smathers Libraries.