by Brian V Smith • August 29, 2022
Frogs have fused bones in their forearms that reduce their flexibility but increase the strength needed for jumping and, according to a new study, for mating and potentially fighting as well. Public domain illustration from "Discourse on Natural History" by Gottlieb Wilhelm

Hold out your arm with your palm facing downward. Now rotate your hand 90 degrees to give a thumbs-up without moving your elbow. If you look closely, you’ll notice the two bones in your forearm, called the radius and ulna, move around each other as you rotate your hand. We’re able to do this because the radius and ulna meet up at the elbow and wrist but are otherwise unconnected.

For frogs, it’s a different story. A frog’s radius and ulna are fused into a single bone, which scientists think acts as a shock absorber when jumping. In a new study published in the Journal of Anatomy, researchers at the Florida Museum of Natural History show that their quirky legs might also be an adaption for fighting and for grasping mates during reproduction.

According to lead author Rachel Keeffe, who recently obtained her doctoral degree in zoology at the University of Florida, the results make intuitive sense, given that not all frogs are so keen on the whole jumping idea.

Having some degree of fusion between these two bones is not a trait unique to frogs. Animals like horses, goats and bats have semifused radii and ulnae, which likely helps make them such great runners and flyers.

Fusion between bones is also beneficial for jumping animals, of which frogs are the unparalleled champions among vertebrates. Bullfrogs, for example, are some of the largest frogs on record and can jump a distance of up to six feet. For a human male of average height to achieve a comparable feat, he would need to jump about 50 feet forward.

Scientists assumed frogs long ago traded in forearm flexibility for stronger bones to aid in jumping.

To investigate this question, Keeffe used 3D modeling to determine how well frog bones held up during jumping while adding in simulations for mating as well. Frog reproduction typically involves the male clinging to the back of the female with his forearms, a behavior referred to as amplexus.

The Florida Museum has a large collection of digitized specimens thanks to the openVertebrate (oVert) project, which meant Keeffe had several references to choose from for modeling the arm bones. Over the course of several months in 2020 and 2021, she created a model of a bullfrog forearm from a museum specimen along with hypothetical models with varying degrees of fusion between the radius and ulna. 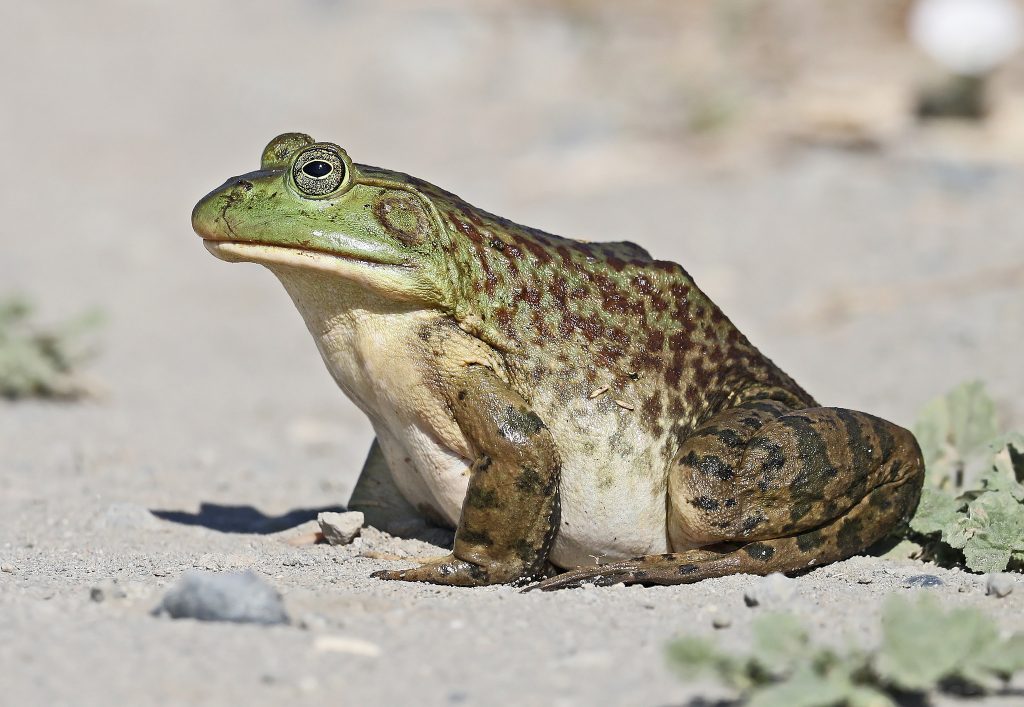 Keeffe based her 3D model on the common American bullfrog, Rana catesbeiana, because the species exhibits characteristic jumping behavior, has a conspicuous indentation where a tendon important for mating behavior attaches and because the radius and ulna are easily distinguished, despite being fused. 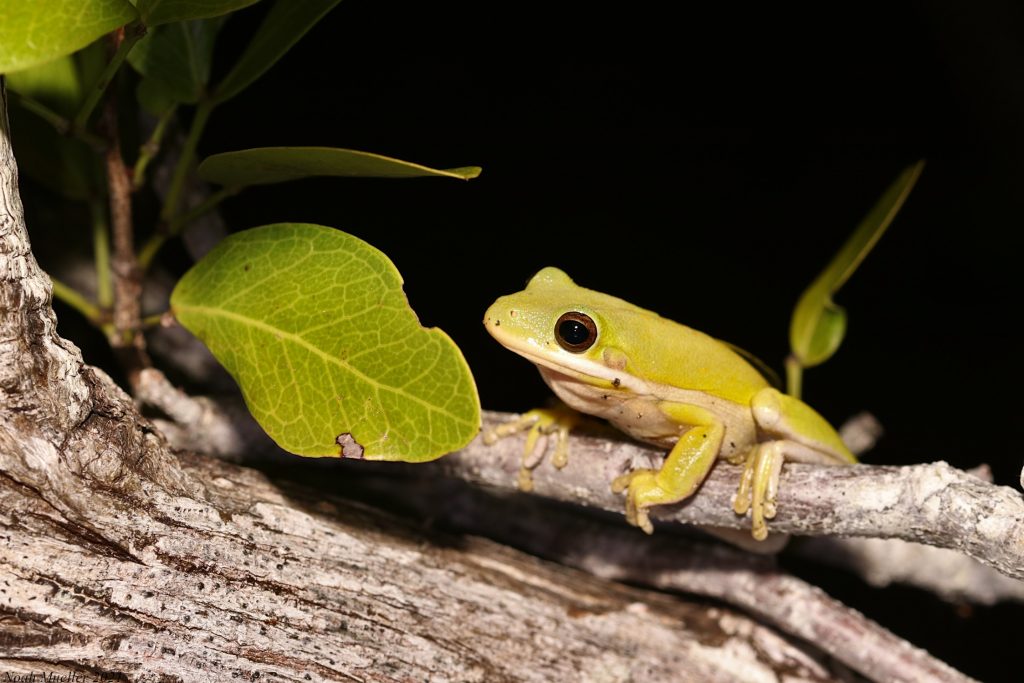 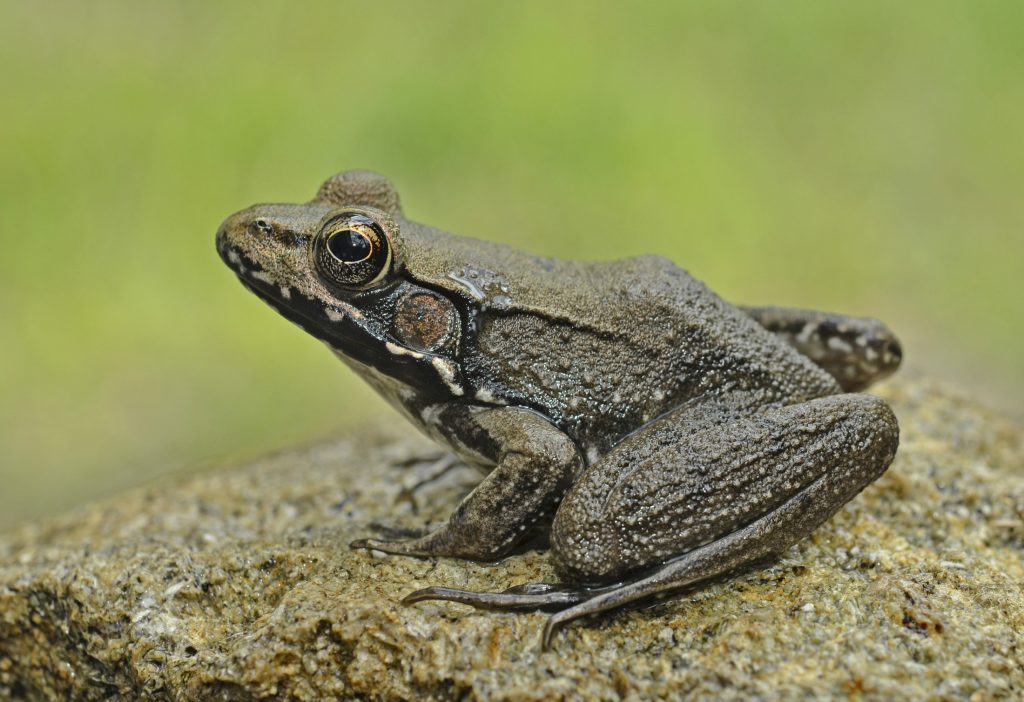 Keeffe’s anatomical measurements, which included the green frog Rana clamitans, indicate the radius and ulna are broadly fused across all adult frogs, but the degree of fusion differs by size and species.

Keeffe ran jumping simulations with software often used by engineers when building things like bridges and space shuttles. In each case, she modeled a large amount of force on the end of the bone connected to the foot to create a worst-case scenario.

Her results weren’t immediately intuitive. In both jumping and mating simulations, the hypothetical semifused model experienced smaller amounts of stress than the model of a fused radioulna that frogs actually have. This was the case for every simulation, regardless of whether the bones were hollow or solid.

Keeffe suspects the answer likely has to do with a balancing act between how high a frog can jump and how much of an impact it can withstand upon landing.

“The semifused model has less stress, but it also has slightly more volume, and thus weight, than the bullfrog model we tested,” she said. “If you fuse two bones together, you’re improving the strength while decreasing the weight.”

Thicker and lighter bones are useful for jumpers that can’t afford to get weighed down by a heavy skeleton.

This didn’t explain why non-jumping frogs retained the fused bone, however. According to her results, the fused bones of males receive more stress during the mating practice of amplexus than semifused bones. Amplexus can last weeks or even months in some species and generate up to 52 times the weight of the male frog in clasping force. Male frogs are often known to be territorial and regularly use their forelimbs to fight over potential mates, all of which results in the very real possibility that their bones might fracture or break if not strong enough.

Keeffe noticed that the impact of landing was distributed throughout much of the forearm. During amplexus, however, the stress was restricted to a single location: the exact point where a tendon connected to the bone. It also happened to be where the two combined bones were sturdiest. While clasping exerted less pressure on the partially fused bones, the tendon creating that pressure could only be attached to either the radius or the ulna in the hypothetical model, both of which are weaker structures on their own.

In the future, she hopes to create more models based on different species and hopes to re-create this experiment for other types of locomotion, using these models as a point of comparison. She also plans to 3D-print the current models to see how well they hold up to the digital simulations. “Hopefully, I’m going to use them as much as possible, considering how long it took to make them,” she said.

David Blackburn of the Florida Museum of Natural History was also an author on the study.

Adania Flemming receives two University of Florida awards for her commitment to diversity, equity and inclusion