by Marc S. Frank • February 22, 2021
Kudzu’s leaves are trifoliate – consisting of three leaflets, which can vary in shape from lobed to unlobed. UF Herbarium photo by Marc S. Frank

Kudzu is one of the best-known weeds in the U.S. Some consider it the poster child of invasive plants – “the vine that ate the South!” Where did it come from? How did it get here? And is it a cause for concern in Florida?

Kudzu, Pueraria montana, is thought to be native to most of Asia, portions of the Pacific Islands and the northernmost parts of Australia. Botanists have described three distinct varieties of this species, which are recognized by differences in their flowers and fruit. One of these varieties, Pueraria montana var. lobata, was introduced and subsequently escaped into the wild in southern and eastern Europe, Africa, tropical Australia, South America, parts of Central America and the Caribbean and a wide swath of the U.S.

2: It was introduced to the U.S. more than a century ago.

Kudzu was exhibited in 1876 at the Philadelphia Centennial Exhibition and seven years later at the New Orleans Exhibition. Seed became available from U.S. mail-order catalogs by the early 1900s. Kudzu was touted as a fast-growing, ornamental vine for shading porches and courtyards and an inexpensive forage for livestock. In the 1930s and 40s, kudzu was widely promoted as a means of controlling soil erosion and adding nitrogen to the soil. The federal government distributed kudzu and provided subsidies to encourage farmers to plant it, and it was also planted on public lands by the Civilian Conservation Corps.

By the 1950s, folks began to realize the economic and ecological impacts of this aggressive, invasive vine. Kudzu spread across the southern part of the country, smothering roadside forests, farmland, houses and anything else in its path.

Today, it is found as far north as Massachusetts and Michigan, and occasional infestations are reported in the Pacific Northwest, but it is most problematic in the American South. Kudzu covers an estimated 7.4 million acres of land in the Southeast, with the heaviest infestations in Georgia, Alabama and Mississippi. 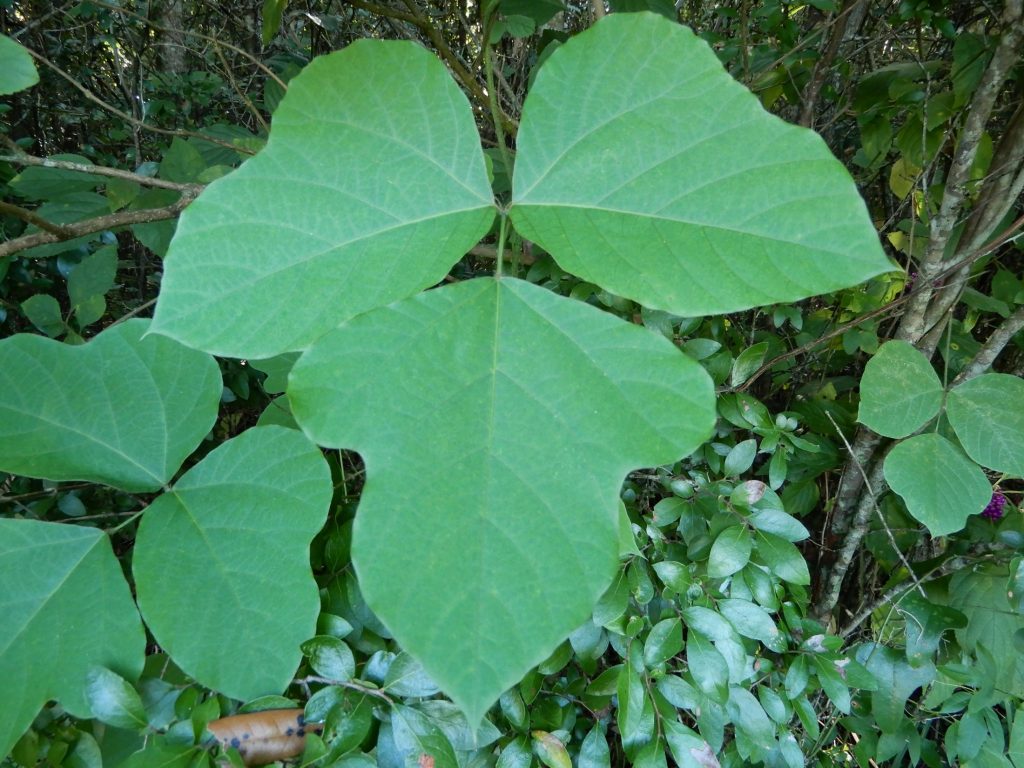 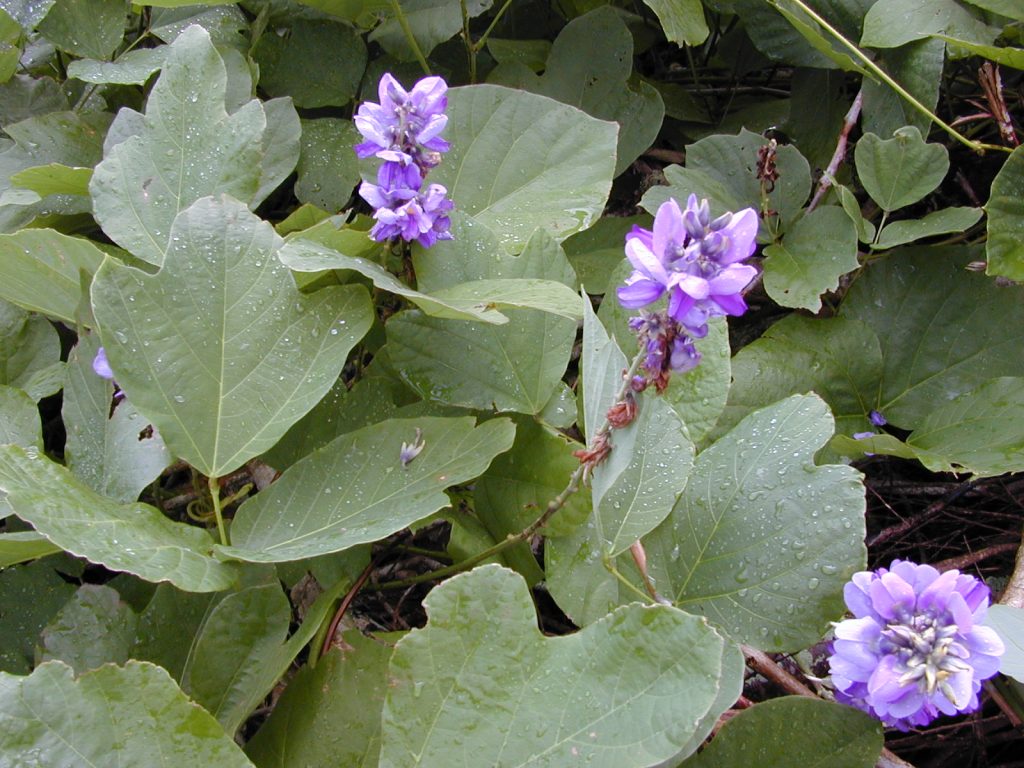 In summer to fall, kudzu produces erect clusters of purple to wine-red flowers that smell like grape candy or grape soda. 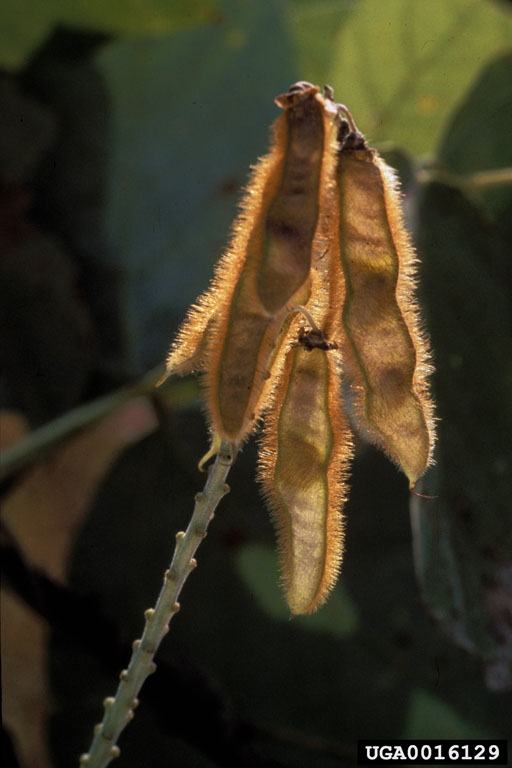 3: Do you think kudzu isn’t a problem in Florida? Think again!

While kudzu is not nearly as common or widespread in Florida as it is in neighboring states, it has been documented from over 40 Florida counties across the state. It is most frequently encountered in the Panhandle. Kudzu typically grows on disturbed sites such as roadsides and vacant lots. However, it can also invade agricultural land, hammocks and urban forests and can impact utility lines and railroads.

Kudzu is the host for an insect pest, known as the kudzu bug or bean plataspid, and a disease called soybean rust, both of which cause serious damage to leguminous crops such as soybeans, field peas, lima beans and green beans. The Florida Department of Agriculture categorizes kudzu as a noxious weed, meaning that it is unlawful to introduce, multiply, possess, move or release these plants without a permit. Private landowners who happen to have a noxious weed on their property are not penalized.

4: Kudzu is challenging to control.

Kudzu grows rapidly – up to a foot a day! Plants develop underground runners called rhizomes, as well as multiple trailing stems, which root into the ground and form new plantlets. Over time, kudzu forms an extensive root system, with massive tubers that can weight up to 400 pounds and extend 10 feet deep. The carbohydrates stored in this root system allow kudzu to withstand and recover quickly after drought, freezing temperatures and burning.
Herbicides are effective on small, immature patches of kudzu, but larger infestations require repeated applications over extended periods of time, which can be very expensive. The USDA is currently investigating a bioherbicide containing the fungal pathogen Myrothecium verrucaria, and initial trials with kudzu are promising. Targeted grazing by livestock, including cattle, goats, sheep and pigs, is also effective. Research suggests that close grazing, in which 80% or more of the vegetation is consumed over a period of three to four years, can lead to successful eradication.

5: In its native range, kudzu has many traditional uses. And we can use it too.*

In eastern Asia, there is a long history of using kudzu for food, fiber and medicine. Leaves, tender shoots and flowers are eaten raw and cooked. Starch derived from the roots is used as a thickening agent, to coat foods before frying, and in noodles and desserts. The dried root has been used for thousands of years in traditional Chinese medicine to treat a variety of maladies, including digestive disorders, diabetes, colds, fevers, headaches, cardiovascular problems, alcoholism and the symptoms of menopause. Fiber from the stems has been used to make paper, fabric, basketry, rope and as a stuffing for cushions. More recently, kudzu has been incorporated in soaps, lotions and other beauty products; it has been researched as a potential source of biofuel; and microbreweries have incorporated kudzu as a flavoring in beer!

*Just remember: Never consume a plant unless you are 100% sure you know what it is and that it has not been sprayed with a herbicide.

For more information on how to identify kudzu, visit the UF/IFAS Center for Aquatic and Invasive Plants and the Florida Department of Agriculture, Division of Plant Industry.

Marc S. Frank is an Extension botanist and a biological scientist in the University of Florida Herbarium.