by Jerald Pinson and Brian V Smith • November 1, 2022
Atala butterflies, Eumaeus atala, have a single red spot on the underside of their hind wings, which partially covers their abdomen when their wings are closed. Florida Museum photo by Zachary Randall

Nature seems to have an inexhaustible supply of inspiration when it comes to butterflies. With over 18,000 species, each with a unique geometry and color combination, butterflies look as though they’re trying their best to imitate a sunbeam that crossed paths with a prism.

A new study published in the journal Tropical Lepidoptera Research helps put this incredible variation into a more focused perspective. The results align with a growing body of evidence that suggests butterfly-wing diversity really boils down to just a few simple ingredients in an ancient recipe that’s stood the test of time.

“Evolution does not just mean change,” said lead author Andrei Sourakov, collections coordinator at the Florida Museum of Natural History’s McGuire Center for Lepidoptera and Biodiversity. “When it stumbles upon successful designs, they stick around, sometimes for hundreds of millions of years.”

Sourakov specifically wanted to test a theory first pioneered in the 1920s, which suggested that butterfly wing patterns are organized in and around distinct, concentrically arranged bands.

According to this idealized blueprint, called the nymphalid groundplan, each butterfly’s mosaic of eyespots, chevrons and striations is derived from one — or a combination of — these symmetry systems.

“Rather than a unified composition, butterfly wings are more like a collage created by wing-pattern elements belonging to different symmetry systems,” Sourakov said.

Several decades of research has confirmed that many butterfly species adhere to this basic blueprint, but most of the work has focused solely on the single family — the Nymphalidae — in which these systems were first discovered. The nymphalids and their closest relatives, the lycaenids, parted ways 90 million years ago. This long stretch of time would have given lycaenids and other groups ample opportunity to develop their own system for coloring their wings rather than sticking with the ancient prototype.

“The idea that the nymphalid ground plan applies to the lycaenids, which diverged from nymphalids when the dinosaurs were still around, is a big assumption to make,” Sourakov said.

Sourakov selected the Atala butterfly, Eumaeus atala, for the study, both for its striking patterns and unique natural history. It’s one of the only toxic species in the lycaenid family, which it flagrantly advertises with a cherry-red abdomen and two spots of the same color on its bottom wings. These markings contrast sharply against a background of velvet black scales and dappled blue spots, which the Atala uses like semaphores to attract mates.

Atala butterflies nearly disappeared from their native range in Florida when their host plant was overharvested in the early 1900s, but later efforts to cultivate the plant led to the resurgence of both species, making them one of the few conservation success stories in southern Florida. Atala populations are now stable, and a colony of the species has been established at the Florida Museum’s McGuire Center, which Sourakov used for the study.

To assess the groups’ similarities, Sourakov borrowed an unlikely technique from previous research. By exposing pupating insects to a pharmaceutical blood thinner called heparin, scientists discovered they could alter the resulting wings of adult butterflies.

“Wing-pattern elements belonging to the same symmetry systems should react in similar ways to the same treatment,” Sourakov said. “By tweaking the expression of the underlying genes, such experiments allow us to understand the amazing variation that is found in butterflies and help us pinpoint the exact source of that variation.”

Despite the significant span of time since the two groups diverged, the study’s results indicate Atala and nymphalid butterflies share similar responses to heparin. Depending on the concentration of heparin the pupae had been exposed to, the iridescent teal spots that normally dot adult wings either expanded, contracted or faded entirely. The only markings that weren’t affected were the red spots, which may correspond to a corresponding nymphalid symmetry system that is insensitive to heparin. 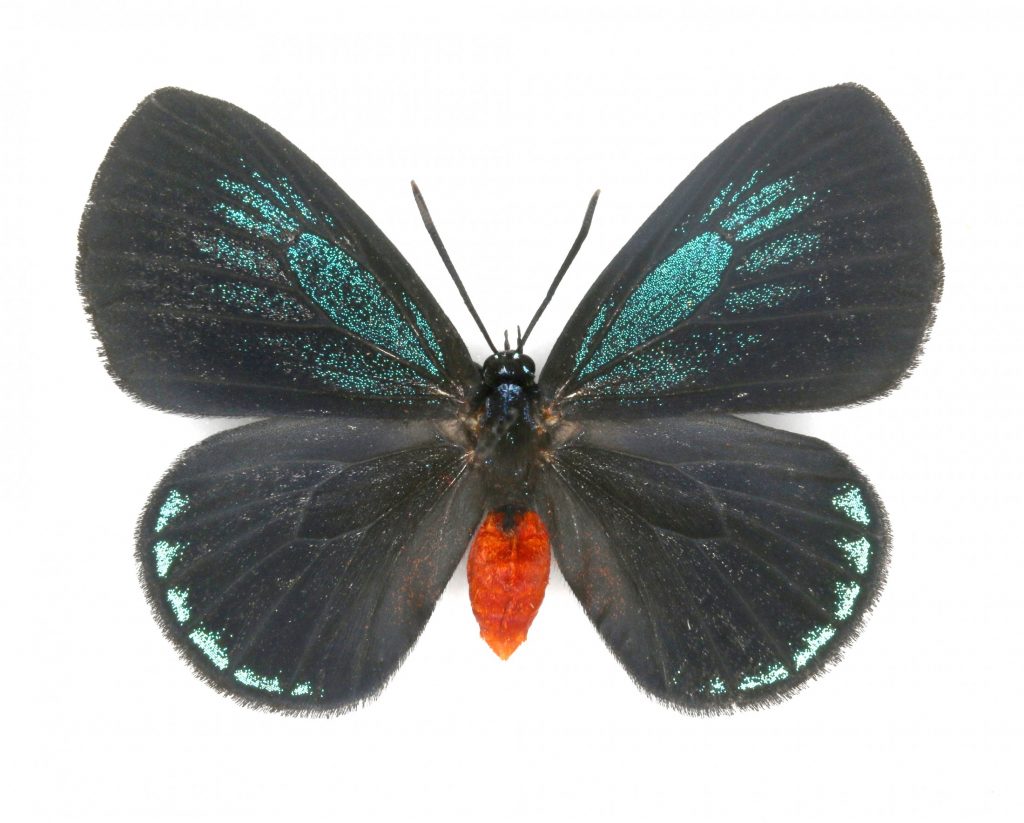 Atala butterflies, Eumaeus atala, are a rare species native to southern Florida and parts of the Caribbean with an even rarer appetite for the cycad Zamia integrifolia, from which the caterpillars sequester a bevy of protective toxins. 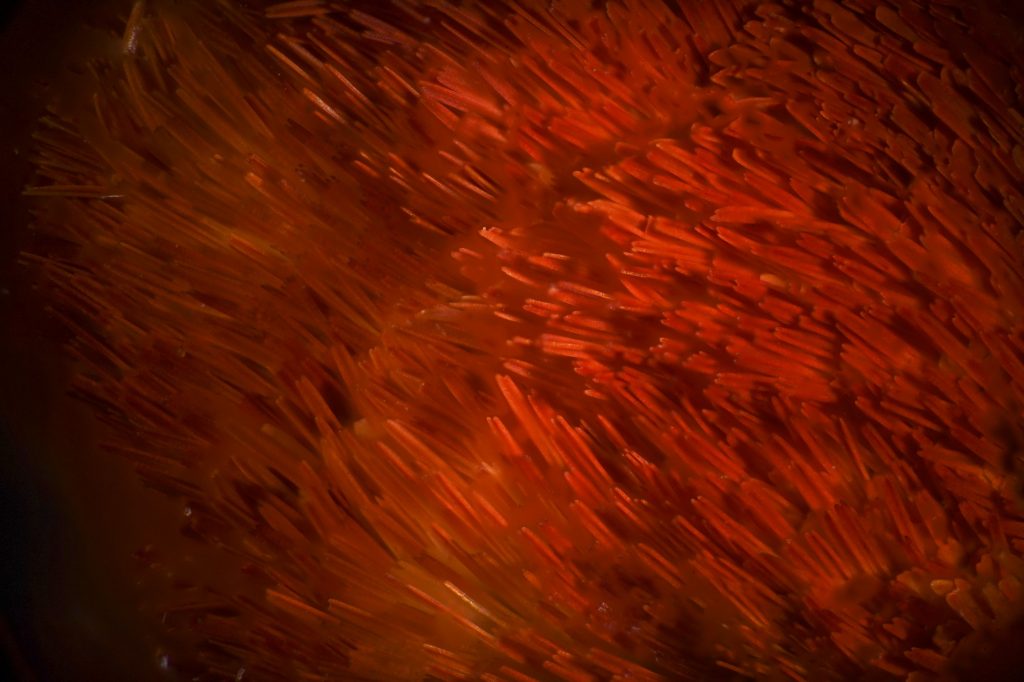 Atala butterflies’ crimson red scales on its abdomen (shown here) and wings are thought to be aposematic, warning predators of their bitter taste. 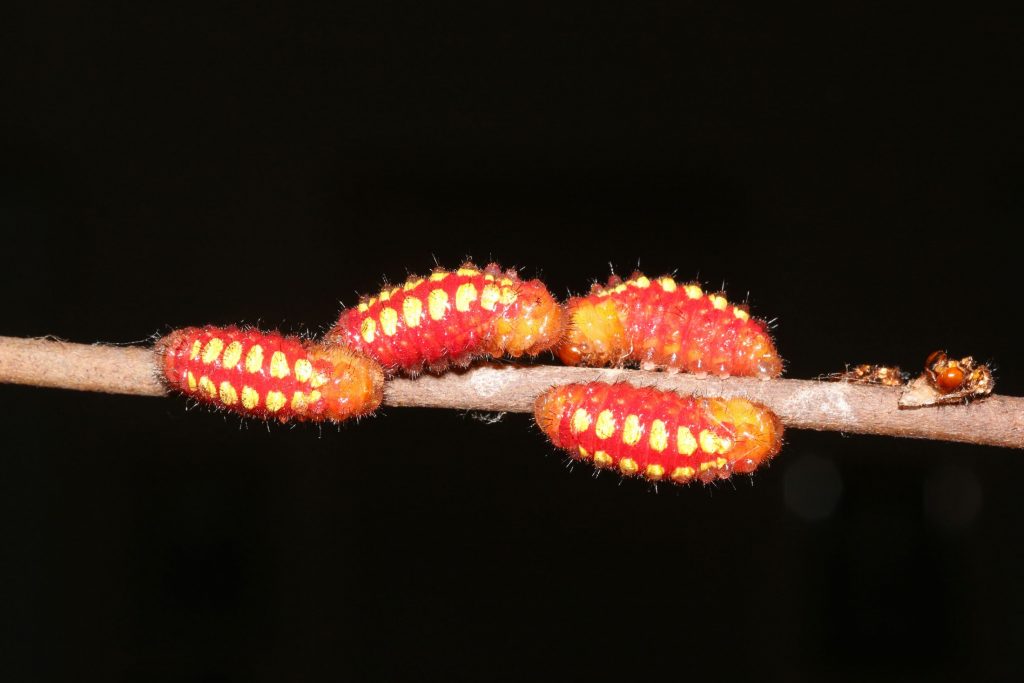 Both Atala caterpillars and butterflies are similarly toxic, which both advertise with contrasting colors.

The iridescent bands on the underside of Atala wings transformed and faded with increased exposure to heparin.

“Remarkably, there seems to be many similarities between Atala’s wing pattern and the nymphalid ground plan,” Sourakov said.

The results provide external confirmation that many butterflies diversified using the same basic toolkit provided by their ancestors, with only a few alterations now separating distantly related species. But, Sourakov notes, the genetic underpinnings that govern these changes are still being mapped out.

“Future studies will be necessary for determining whether the same genes control the banding patterns and colors of Atala and other lycaenids compared to other butterfly families, but I hope these results have laid the groundwork for further inquiry.”

Matthew Standridge, Kristin Rossetti and Jaret Daniels with the McGuire Center for Lepidoptera and Biodiversity are also co-authors on the paper.