by Natalie van Hoose • October 1, 2020
The study contributes to a growing body of research on how physical and behavioral characteristics can not only predict animals’ habitat and ecology, but how sensitive they may be to change. Here, a researcher holds a chestnut-crowned gnateater, Conopophaga castaneiceps. Florida Museum photo by Ian Ausprey

New research shows the glaring light in human-altered landscapes, such as livestock pastures and crop fields, can act as a barrier to big-eyed birds, potentially contributing to their decline.

Florida Museum of Natural History researchers found strong links between bird eye size, habitat and foraging technique. Birds that kept to the shade of the forest had larger eyes than those that inhabited the canopy, and birds with relatively small eyes were more numerous in agricultural settings.

The findings suggest eye size is an overlooked, but important trait in determining birds’ vulnerability to changes in their habitat and could help inform future research on their sensitivity to other bright environments, such as cities.

“Many bird species literally disappear from highly disturbed, anthropogenic habitats such as agricultural landscapes,” said lead author Ian Ausprey, a Ph.D. student in the Florida Museum’s Ordway Lab of Ecosystem Conservation and a National Geographic Explorer. “That’s probably due to many reasons, but this paper suggests light could be part of that.”

Despite numerous studies on how light influences the makeup of plant communities, little research has focused on how it drives the ecology of vertebrates. Ausprey said while some of the study’s results may seem like “a no-brainer,” it is the first to document the relationships between light, eye size and how birds navigate their world.

Light is especially key for birds, which use their vision to detect food. Big eyes house more photoreceptors and are a common feature in birds of prey such as owls and raptors, enabling them to resolve images at longer distances and in darker settings.

But large eyes can also be susceptible to overexposure and glare in bright environments. Previous research has shown too much light can overwhelm birds, causing them to alter their feeding behavior and diminish their alertness to threats.

For four years, Ausprey and fellow University of Florida Ph.D. student Felicity Newell, a study co-author, surveyed birds in the cloud forests of northern Peru, part of the tropical Andes, a global biodiversity hotspot. In these forests, light is structured on a vertical gradient, powerful at the canopy and increasingly weaker as it filters down to the darkest parts of the understory. Gaps in the canopy open up patches of startling brightness, changing light intensity “over infinitesimally small scales,” Ausprey said. “You can go from being very dark to very bright within inches.” 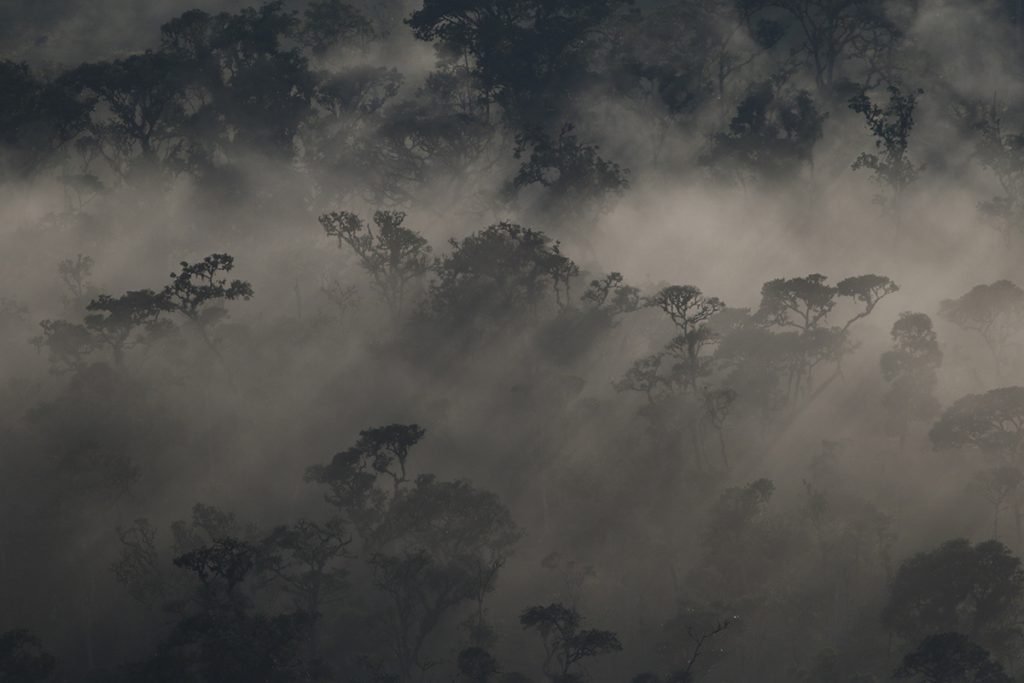 In a description of the Andean cloud forests, pioneering naturalist Alexander von Humboldt once wrote, “At these elevations…the traveler finds himself constantly surrounded by a dense fog.” 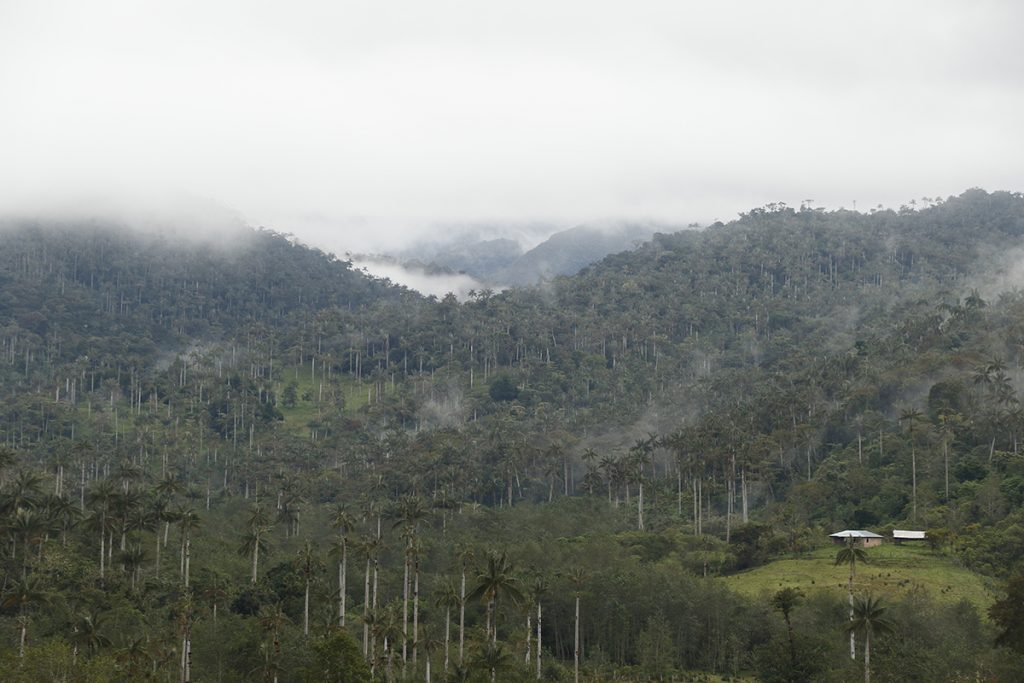 Human presence in the Amazonas region is nothing new: Before the arrival of the Spanish, the land was home to the Chachapoyas, a culture that predated the Inca. 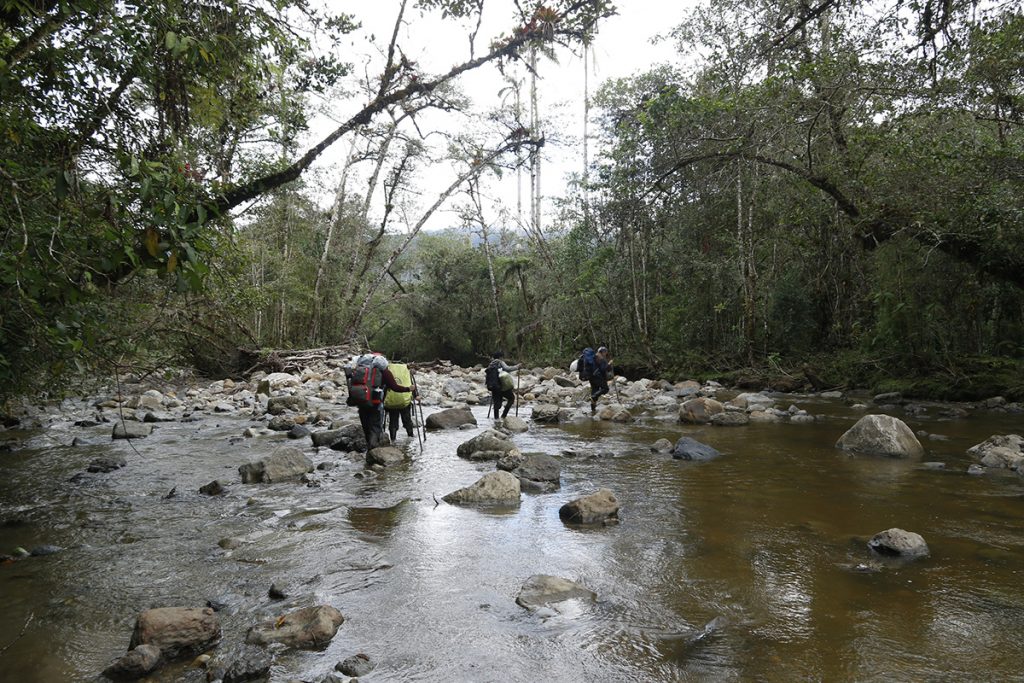 “The forest is dripping. It can change within minutes from being really bright to dark and almost oppressive,” said study co-author Felicity Newell.

The swift, dramatic changes in the landscape are mirrored in its variety of birds: A difference of 1,000 feet in elevation can uncover a completely distinct avian community.

The region is also home to small-scale farms with livestock pastures and vegetable fields, often interspersed with islands of remaining forest. The broad range of ambient light, from the deep, dark forest interior to wide open country, made an ideal model system for measuring birds’ use of light, Newell said.

Ausprey and Newell measured eye size relative to body size in 240 species that make up the cloud forest bird community of Amazonas, their study region.

They found the largest-eyed insect-eating birds were “far-sighted” species, those that nab prey on the wing, such as flycatchers. Eye size in “near-sighted” species that hunt in the dimly lit understory increased the closer to the ground they lived. One such big-eyed species is the rufous-vented tapaculo, Scytalopus femoralis, a bird only found in Peru. Ausprey said the species behaves much like a mouse, scuttling across the forest floor in search of insects in mossy logs and under tree roots.

For bird groups that eat fruit, seeds and nectar – food items that don’t require capture – eye size did not vary based on which part of the forest they inhabited.

The researchers also attached tiny light-sensing backpacks to 71 birds representing 15 focal species. The sensors tracked the intensity of light the birds encountered over a period of days, providing a first look at their light “micro-environments.”

Of these 15 species, the bird that inhabited the darkest environment was the rusty-tinged antpitta, Grallaria przewalskii, another species exclusive to Peru, which spends much of its life walking along the forest floor. The blue-capped tanager, Thraupis cyanocephala, lived in the brightest environments. 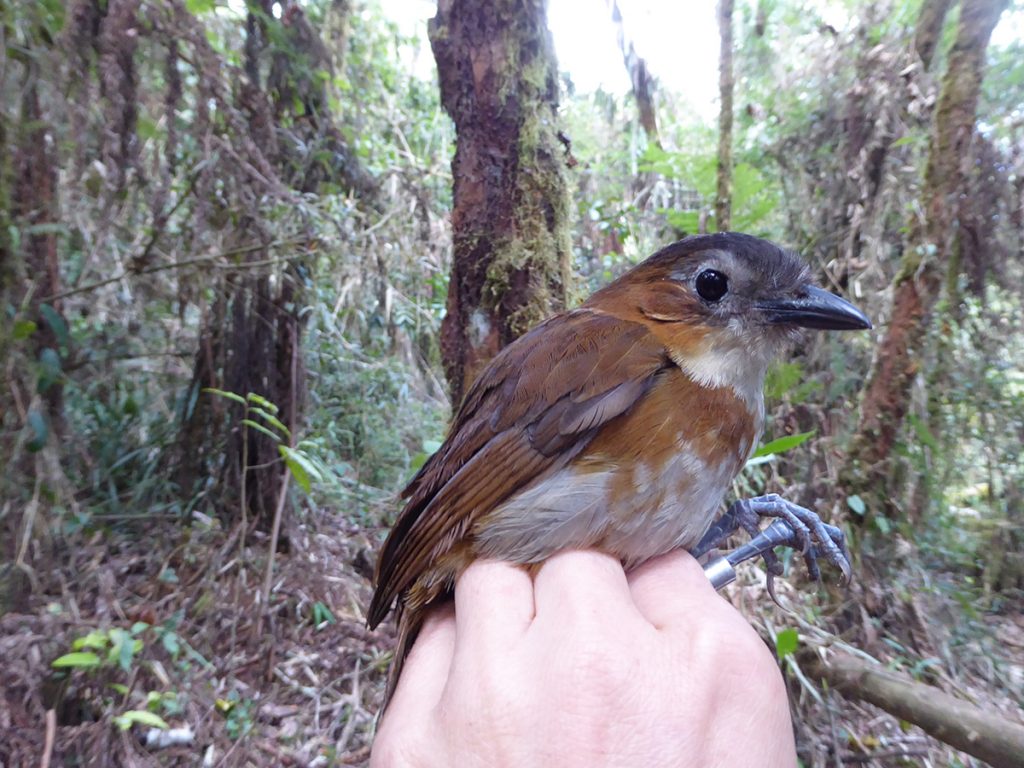 Little is known about the rusty-tinged antpitta, Grallaria przewalskii, Ausprey said. The long-legged, large-eyed bird rarely flies, spending most of its time walking the forest floor. 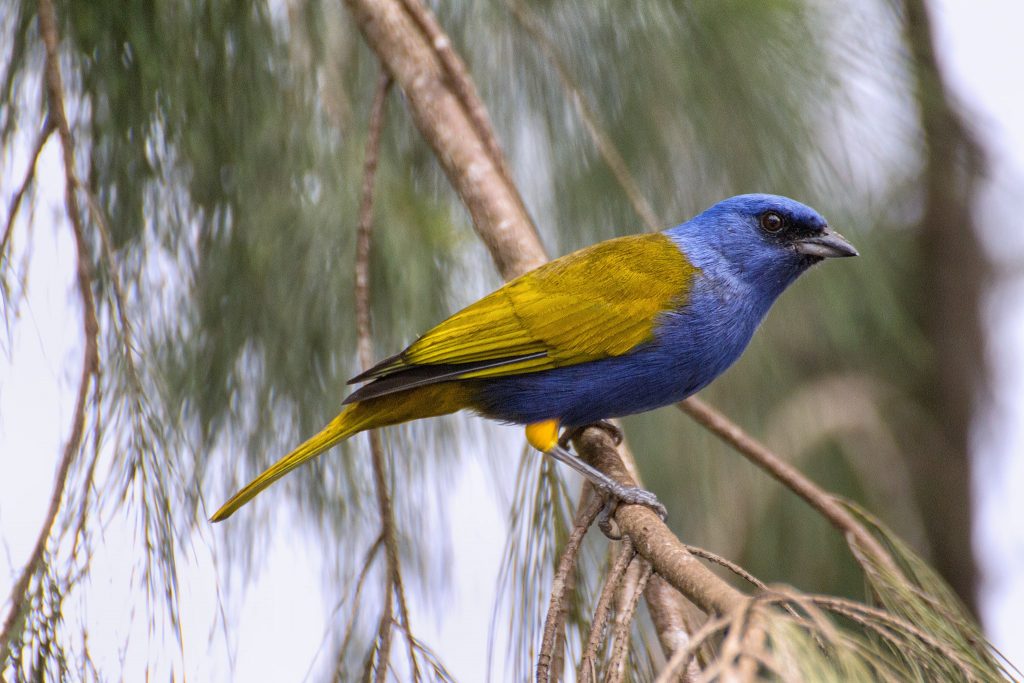 Out of all the species tracked, the blue-capped tanager, Thraupis cyanocephala, inhabited the brightest environments, sticking to the canopy and eating fruit.

The researchers also found that eye size was correlated with the abundance of a species in agricultural settings, with smaller-eyed birds being more common, suggesting that birds better adapted to the dark forest understory would struggle to adjust to the flood of light in a field, Ausprey said.

Preliminary results from subsequent research suggest these patterns hold at a global scale. The trend might also carry over into urban areas, which “are basically extreme forms of agricultural landscapes in some ways,” he said.

In fact, the rufous-collared sparrow, Zonotrichia capensis, the bird most commonly found in agricultural fields, is also the most abundant species in Latin American cities, Newell said.

The study is the first to emerge from Ausprey and Newell’s project, which examined how climate and land use influence cloud forest birds.

“This study makes excellent use of emerging technologies to answer one of the major questions in ecology – how do light levels affect the niches of birds and their vulnerability to habitat modification,” said Scott Robinson, Ordway Eminent Scholar at the Florida Museum.

But the technology required a bit of MacGyvering: The light sensors don’t directly transmit data, meaning Ausprey had to figure out a way to get them back. The solution was to superglue a radio tag to the delicate sensor and use a surgical adhesive to attach the packet to a bird’s back, sticking long enough to get meaningful information, but detaching after a few days. Ausprey would then clamber over steep ridges and through thick shrubs and bamboo, antenna in hand, to retrieve it.

They also had to select the bird species that would cooperate: Large tanagers, toucans and woodcreepers were excluded due to their strong bills and proclivity for aggressive behavior. Even so, three of the expensive, imported sensors wound up chewed and destroyed.

“When you work with technology in the field, you have to have a strong stomach for tragedy,” Ausprey said.

The researchers published their study in Ecology.

Ausprey and Newell expressed thanks to the large team – about 100 people – of field assistants, hosts, nature reserve staff and community members that contributed to the project.

Ausprey is also a fellow with the UF Biodiversity Institute.