by Jerald Pinson • May 2, 2022
Biologists recently teamed up with park rangers in Ecuador's Yasuní National Park to document changes in butterfly abundance over long periods of time. Photo by Keith WIllmott

In 2017, a group of scientists raised alarm bells by showing that flying insects had declined in Germany by more than 70% in the three preceding decades. Studies before and since then have shown similar patterns in insects on a global scale. But with 1 million known species — and conservative estimates indicating there are millions more awaiting discovery — there aren’t nearly enough entomologists to document the full scale of insect diversity, much less how their populations change over time.

In a new study, entomologists turn to the aid of park rangers in Ecuador’s Yasuní National Park, broadly considered to be one of the most biodiverse ecosystems on the planet. Researchers, students and park staff have been actively engaged in monitoring butterfly abundance in Yasuní since 2016 in an ongoing project that flips the script on the way most survey efforts are conducted in the tropics.

“This study has obvious benefits for science and conservation, but it was also important that it include social benefits for the people we worked with,” said lead author Maria Checa, a researcher at the Pontifical Catholic University of Ecuador and a former doctoral student at the Florida Museum of Natural History.

“We still know so little about the impacts of environmental change in tropical areas, because we simply don’t have enough researchers with the expertise to study these regions,” she said. “We need to empower local actors with this knowledge, because they are key stakeholders in conservation.”

Many scientists who focus on conservation often run into a roadblock early in their endeavors: Most of the world’s biodiversity is unevenly distributed in the tropics, but the majority of researchers who study it primarily live in temperate regions. As a result, the flora and fauna of many industrialized countries are relatively well-studied and benefit from extensive monitoring programs, like the decades-long survey of insect declines in Germany.

A similar United Kingdom program using butterflies as a proxy for the health of insect communities was launched in 1976 and has since been adopted in at least 19 other European countries. These ongoing surveys offer a wealth of data for scientists, but the patterns they reveal provide only a small snapshot of the changes occurring globally.

“In Great Britain, you’re dealing with less than 60 butterfly species, while in Yasuní alone there’s likely more than 1,500,” said senior author Keith Willmott, curator and director of the Florida Museum’s McGuire Center for Lepidoptera and Biodiversity.

Scientists from many industrialized countries have tried to make up for this imbalance by conducting short-term projects in tropical ecosystems, often paying local residents to help with surveys and collections. This practice, sometimes called parachute biology, can yield important scientific insights. But when the project concludes or the funding runs dry, researchers return to their institutions, and residents return to their normal lives.

Willmott says these limited surveys will be insufficient to effectively monitor long-term population trends and help stave off what is currently the worst extinction event since the death of the dinosaurs.

“Trying to make sense of abundance patterns in a tropical community where there’s less climate seasonality and a myriad of complex interactions taking place is incredibly complicated and requires long-term datasets,” he said.

Getting these programs started and keeping them going, however, isn’t always an option in remote regions where humans populations are scarce. So when park rangers expressed interest in helping survey butterflies in Yasuní in 2015, Willmott saw the potential for a broad-scale partnership.

“Ecuador is dotted with national parks that have pristine forests, and part of the job responsibilities for many park rangers is to conduct biodiversity monitoring. It just seemed to us that this was a potential solution to the expense and logistics of managing these projects,” he said.

Even with the help of park rangers, there is no realistic way to feasibly sample the diversity of an entire rainforest. Instead, biologists rely on indicator species, organisms that are broadly distributed and easy to find but are sensitive enough to environmental change that they can be used to infer how related groups are faring.

For insects, those indicator species are butterflies.

“There are a number of reasons they make good indicators,” Willmott said. “They can be found just about everywhere, they’re incredibly diverse and they reflect what’s going on in other organisms.” 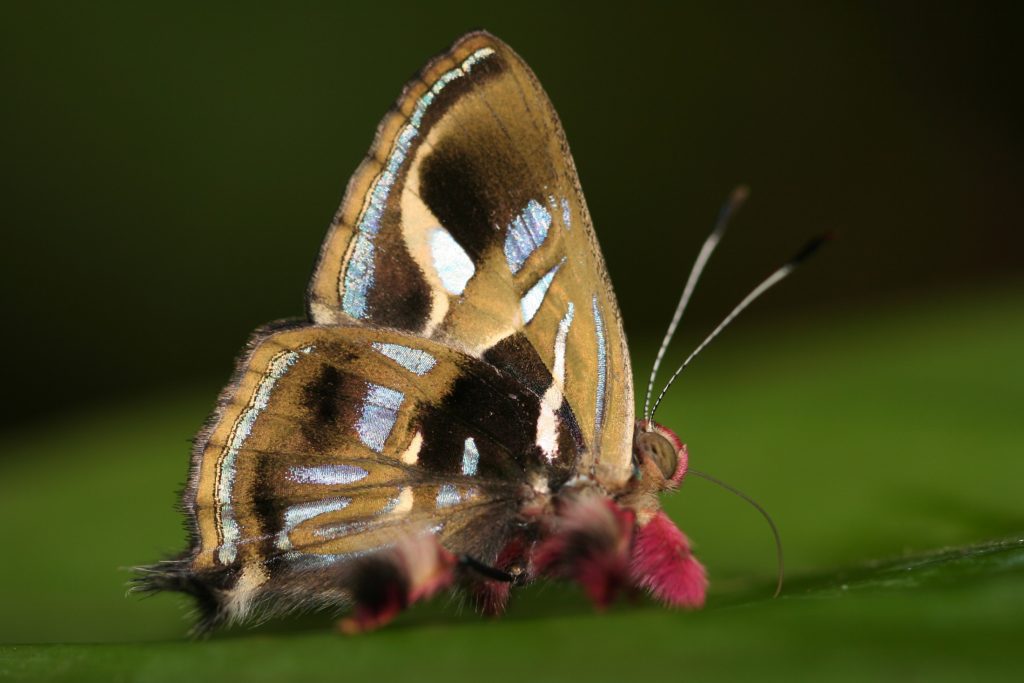 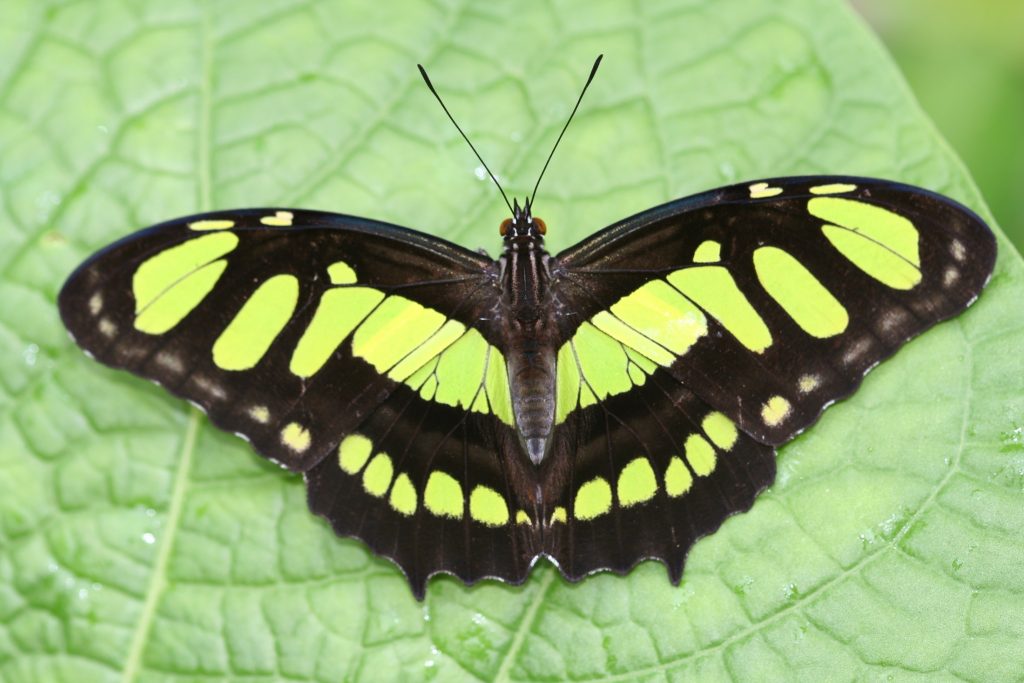 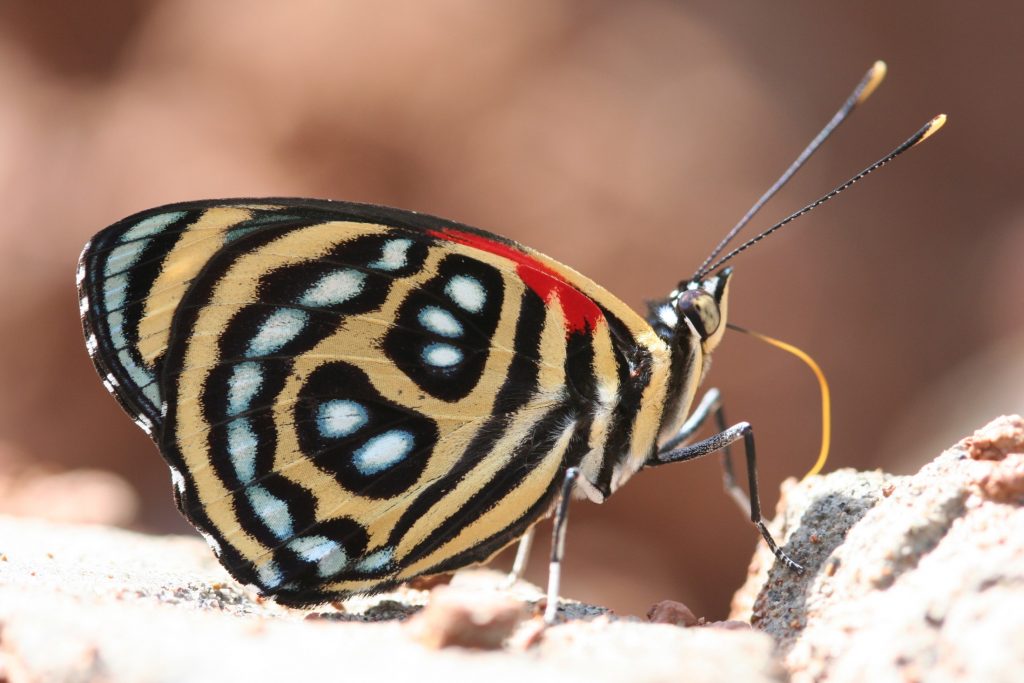 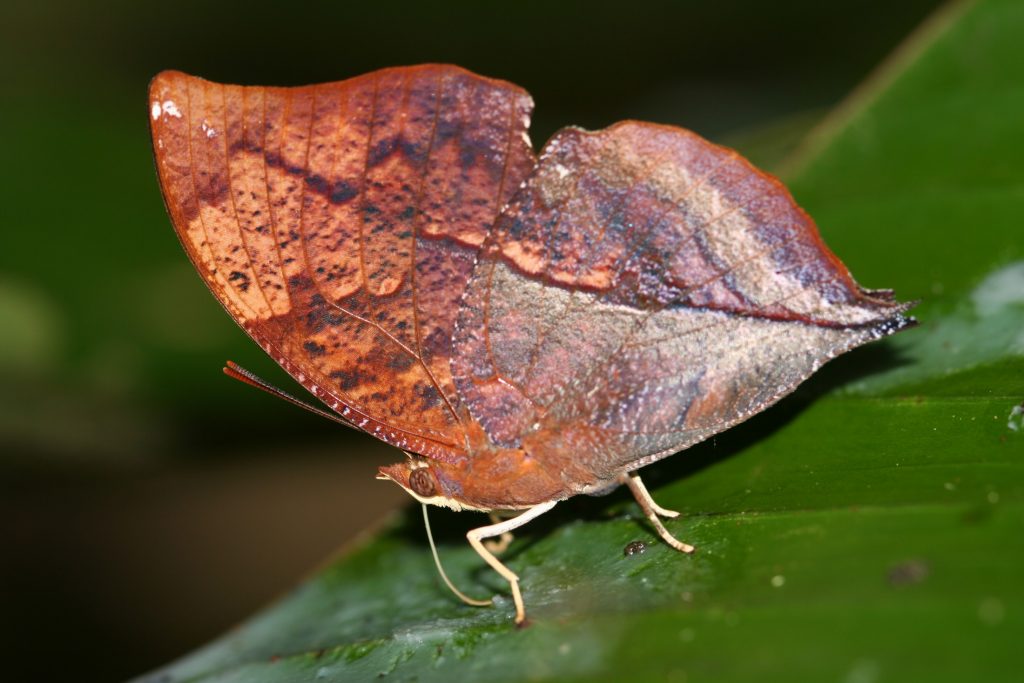 Butterflies occupy a central role in mazelike ecosystem webs. Most rely exclusively on plants for food, and plants — in turn — rely on butterflies for pollination. Caterpillars and butterflies also make a good meal for predators higher on the food chain. If you take butterflies out of the equation, the webs that bind natural communities together begin to unravel. This makes them the perfect litmus test for gauging ecosystem health.

And butterflies have another advantage that helps them stand out from the crowd. “From a practical point of view, there’s no question that they are by far the easiest insect group to identify,” Willmott said. In a place as diverse as Ecuador, this last component is imperative.

Working with Checa, Willmott, co-author Sofia Nogales from Ecuador’s National Institute of Biodiversity and their colleagues, the rangers quickly learned how to collect butterflies with bait traps and identify the most common species. Since 2017, they’ve been conducting regular surveys with comparable accuracy rates to those of trained field biologists. But their contribution to the study didn’t end there.

“The rangers wanted to be more involved with the project, so we started talking about writing up a manuscript together,” Checa said. “We set up a workshop in Quito in which we provided computers and taught them how to run basic statistical analyses on the butterfly data.”

For Checa, the project represents an important shift in the way biodiversity monitoring is carried out in her home country of Ecuador, one that she hopes will help protect sensitive ecosystems and give voice to those who inhabit them.

“The people who live in rural areas near protected forests often lack resources and opportunities for formal training. It’s challenging for many to even finish high school,” she said. “We’re talking about decentralizing knowledge from academic institutions to local people and from cities to rural areas.” 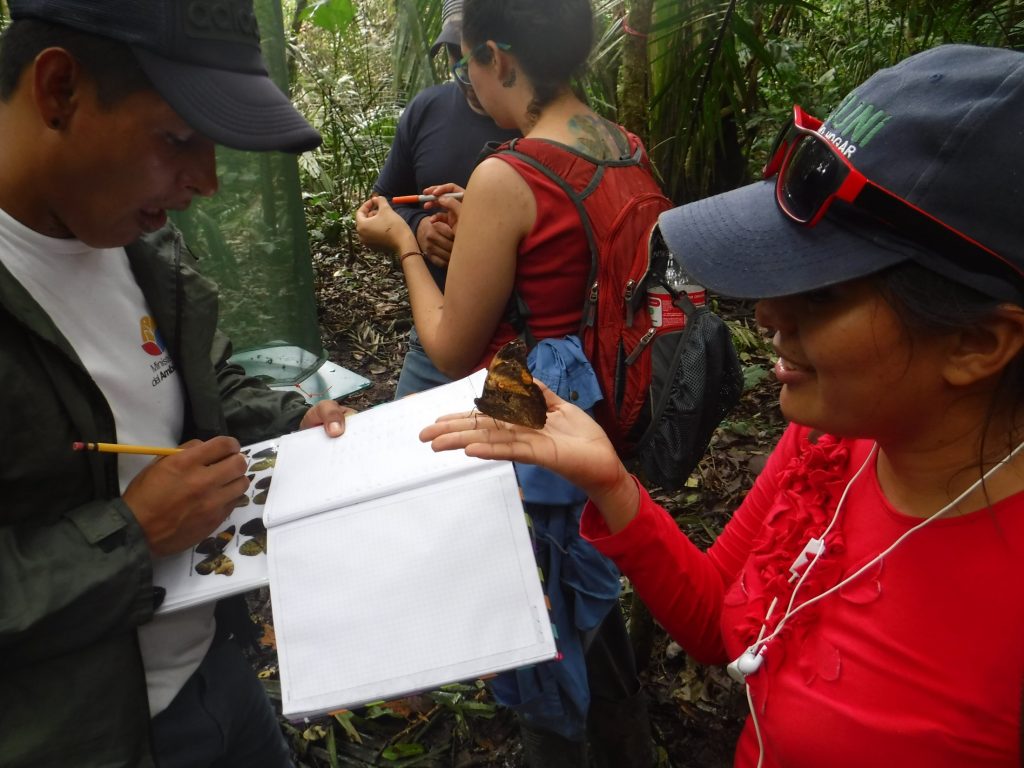 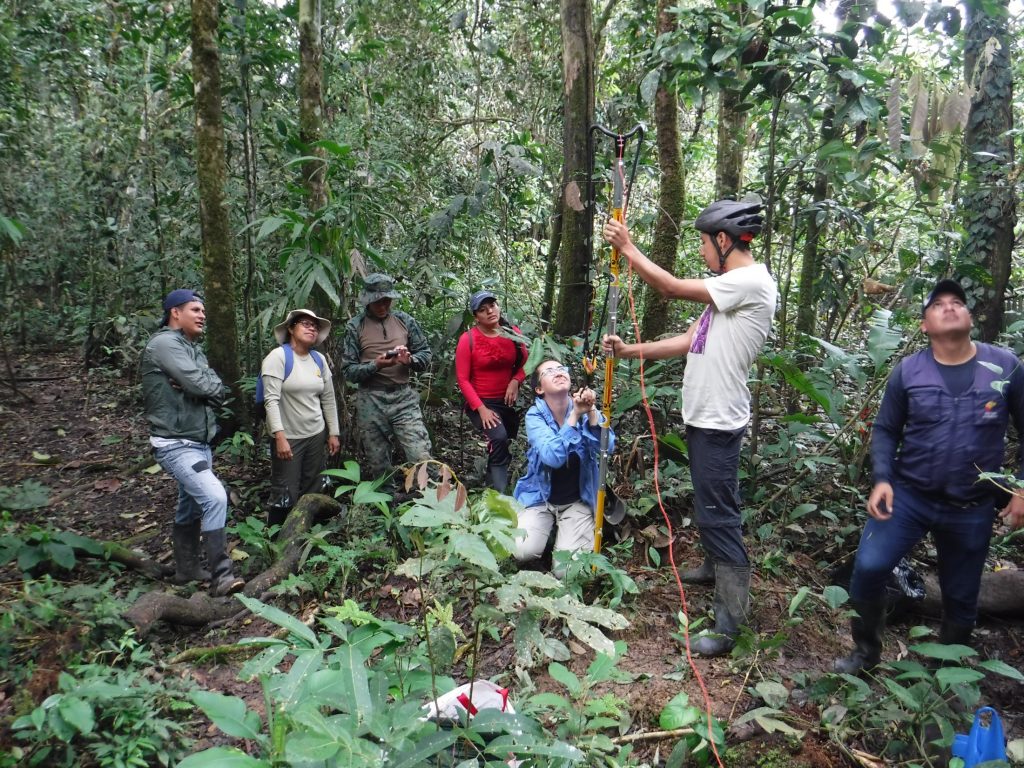 Butterflies aren’t just restricted to ground level. To sample species that fly in the canopy, park rangers use a large sling-shot to place strings for bait traps in the tops of trees. 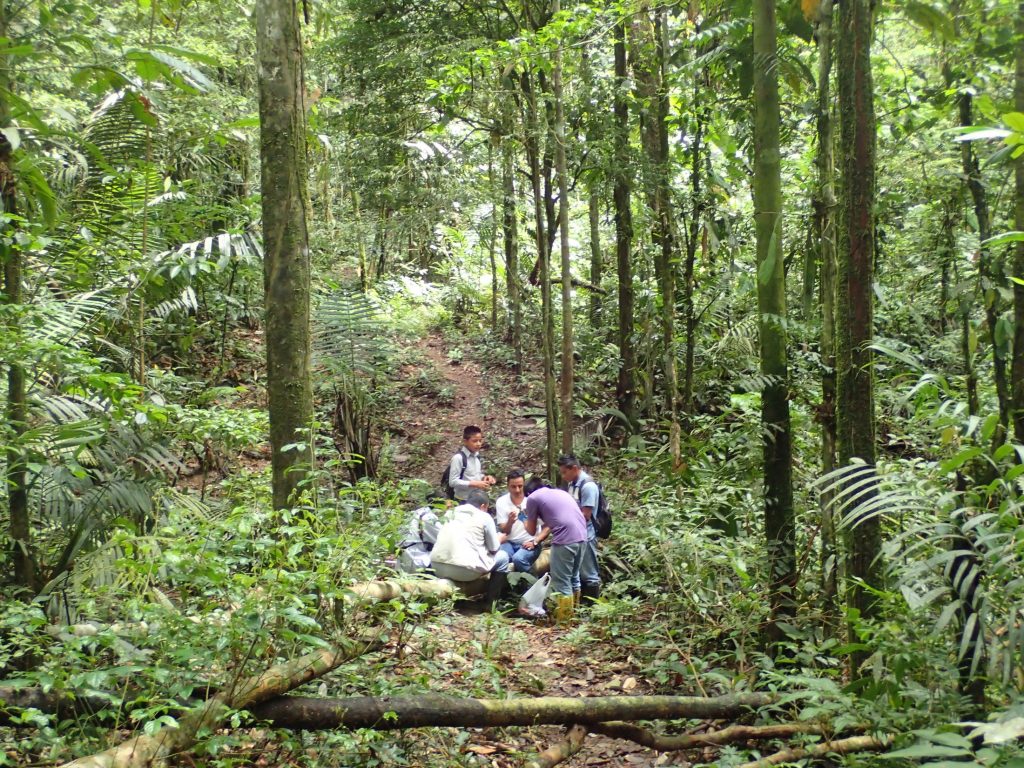 Rangers identify and photograph butterflies in the field, then upload their data for later analysis after returning to their ranger station in Yasuní National Park. 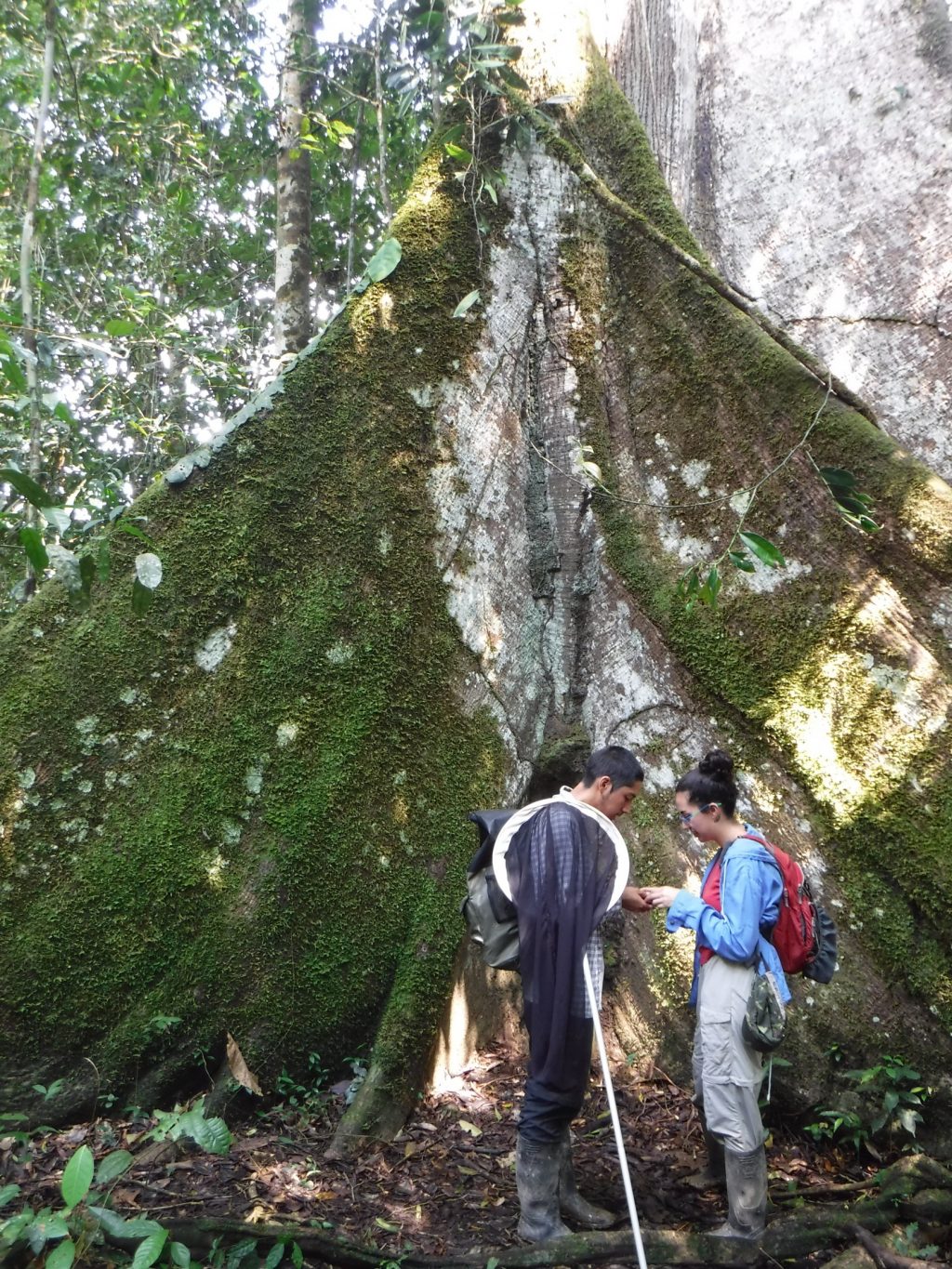 Mayra Licuy helps identify a butterfly between the buttresses of a large tropical tree.

The Yasuní National Park rangers, three of whom are co-authors on this study, are currently in the process of analyzing the data they continue to collect, which they plan to publish in an upcoming article. “We are proud to be the first park rangers in Ecuador to carry out a successful long-term monitoring program – this project has enriched our knowledge of biodiversity and the importance of insects in ecosystems, especially butterflies, helping us to better carry out our work,” said co-author Leslie Bustos.

Ongoing support from the national park’s administration has also been and continues to be critical for the project’s success. Checa and Willmott hope to expand the butterfly monitoring to additional protected areas within Ecuador in the near future.

The researchers published their findings in Insect Conservation and Diversity.

Park rangers Vernardo Ojeda and Alcy Bustos are co-authors on the study, as is Patricio Salazar with the University of Sheffield.

The National Science Foundation and the Pontifical Catholic University of Ecuador funded the research.