Scientists identify new species of crystal-encrusted truffle, thanks to bonobos

by Halle Marchese • September 22, 2020
Bonobos, an endangered species of great ape, typically feed on fruit, leaves and herbs. But primatologist Alexander Georgiev noticed them feeding on a new species of truffle, known as "simbokilo" to local Congolese communities. Photo courtesy of Fanny Schertzer, CC BY 3.0

Mushroom-munching bonobos in the Democratic Republic of the Congo have introduced scientists to a new species of truffle.

Commonly used by Congolese communities to bait traps for small mammals, Hysterangium bonobo is also savored by bonobos, an endangered species of great ape. Scientists say the truffle hints at vast reserves of undescribed fungal diversity in the region.

“Truffles aren’t just for gourmet chefs – they’re also for our closest relatives,” said Matthew Smith, an associate professor in the University of Florida department of plant pathology and curator of the UF fungal herbarium. “There’s so much to learn about this system, and we’re just scratching the surface.” 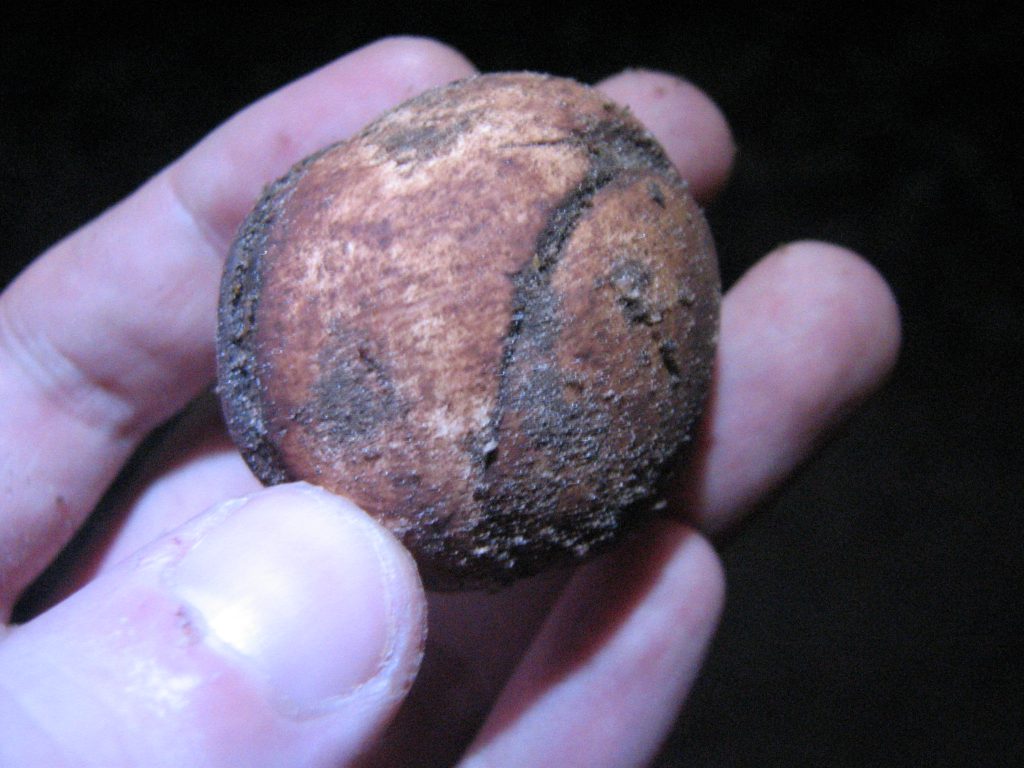 H. bonobo’s outer layer, known as the peridium, is irregularly shaped. UF fungus expert Matthew Smith said a truffle’s reproductive structure is the only part of the fungus that can be seen without a microscope. 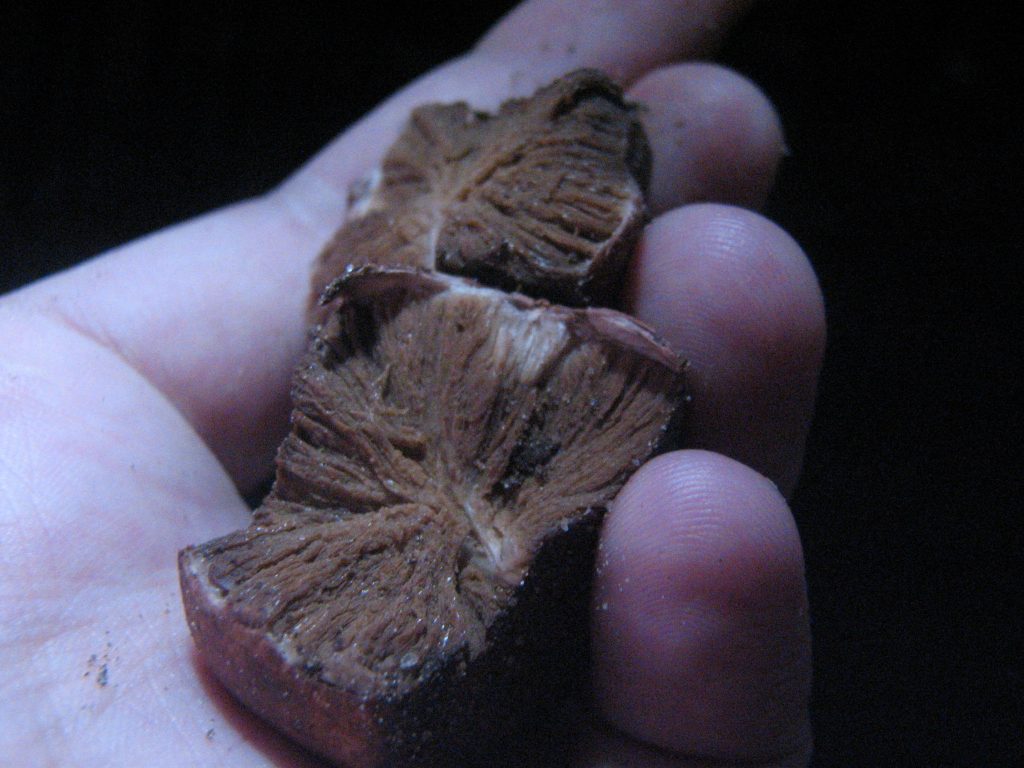 A truffle’s interior, known as the gleba, is full of spores that act as microscopic seeds. 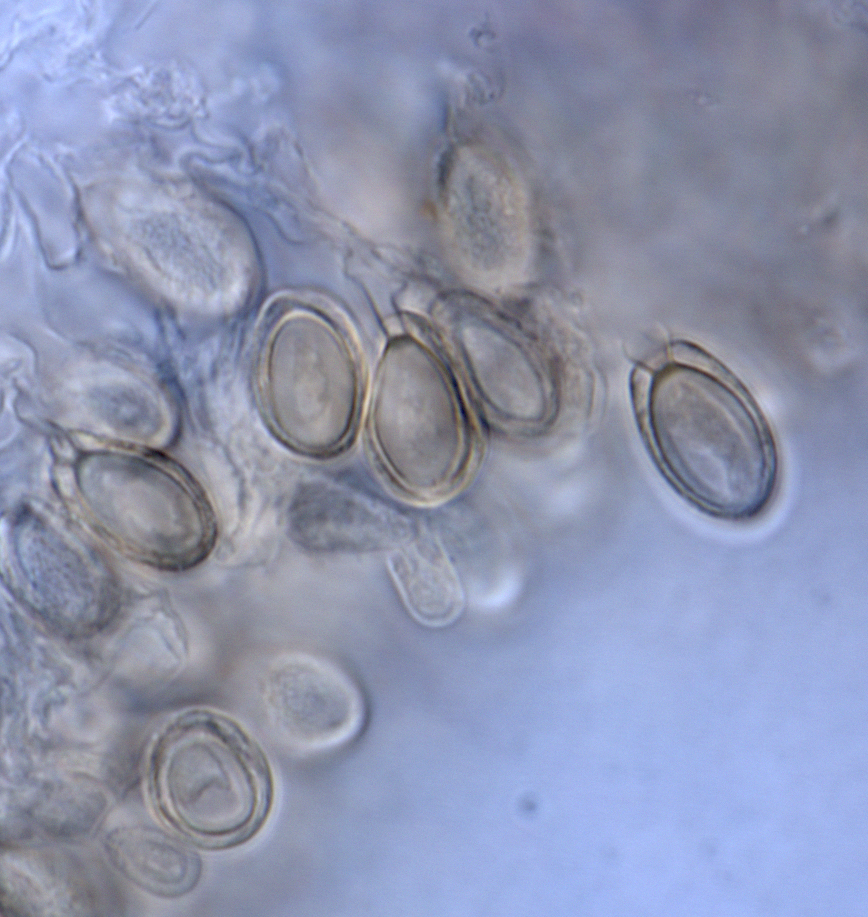 H. bonobo’s oval-shaped spores have thick cell walls that enable them to survive passage through an animal’s digestive tract. Smith also found that the outer layer of H. bonobo was laced with microscopic crystal-encrusted fungal filaments, only visible at high magnifications.

Edible mushrooms widely prized for their aromas, truffles are often ecosystem linchpins, and H. bonobo is no exception. Although it looks like a homely potato, it plays a key role in enabling trees to absorb nutrients from the soil and supports the diets of animals. Its irregularly shaped outer layer is also lined with microscopic crystal-encrusted filaments, possibly used for defense or aroma diffusion.

Although previous studies have reported bonobos eating truffles, this is the first such species identified.

H. bonobo may be a new species to science, but it’s well known to local communities as “simbokilo,” a Bantu name linked to a longer phrase roughly translated as “Don’t let your brother-in-law leave because traps baited with this will bring in plenty of food.”

“Kokolopori people have celebrated their interdependence with bonobos for generations,” said Albert Lotana Lokasola, a graduate student at the University of Kisangani in northern Congo and a study co-author. “Our traditional knowledge of the diets of animals such as bonobos, duikers and rodents that includes food items new to science should be valued, preserved and protected.” 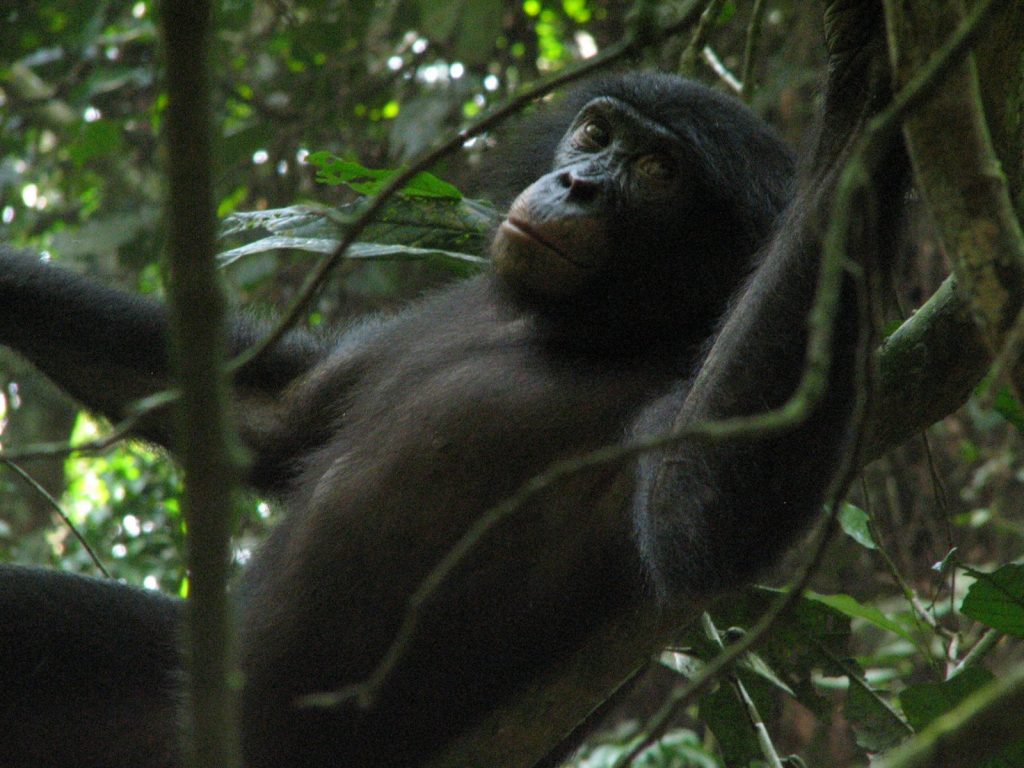 Georgiev tracked a group of wild bonobos through the Kokolopori Bonobo Reserve to study their ecology. 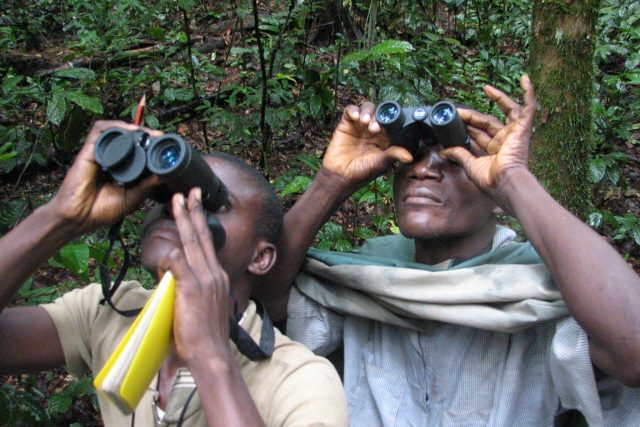 A local team of field assistants helped Georgiev track the bonobos he studied.

Smith said bonobos likely locate H. bonobo by catching its smell wafting through the air or by digging in the soil and sniffing their hands. The truffles are small enough to be swallowed whole, and their microscopic spores are kept intact by thick cell walls as they journey through a bonobo’s digestive tract. Although little is known about the species, Smith said that the truffle shares a number of characteristics with those of high culinary value.

“Even though some truffles are specialized food items, they all evolved in a similar way,” said Smith, who is also an affiliate associate curator in the Florida Museum of Natural History. “They smelled really good, so animals dug them up and spread the spores around.”

Study co-author Alexander Georgiev, a primatologist at Bangor University in Wales, collected samples of the truffles after he observed a group of wild bonobos eating them in Congo’s Kokolopori Bonobo Reserve. He hoped a collaborator could identify the species, not knowing it was undescribed.

“Why they eat these, I’m not sure,” he said. “Perhaps they like the taste of them. I personally love mushrooms and have never considered what I get out of them nutritionally. They just taste amazing.”

Georgiev said although he had never seen bonobos feed on truffles before, the local team of field assistants helping track them “instantly knew what was going on.”

“It’s important to realize that even though this paper presents a ‘novel’ interaction and the description of a ‘new’ species for the Western scientific community, in reality these are interconnected associations that have been known about for untold generations by the locals in the region,” added Todd Elliott, a Ph.D. candidate at the University of New England in Australia and the study’s lead author. “As foreign scientists, we must take the time to ask and learn from indigenous people and locals in areas where we work because they usually intimately know about the organisms that we think are new.”

The study was published in Mycologia.