Florida Museum of Natural History researchers are asking for help tracking two obscure species of ultra-fuzzy, fast-flying native bees that are most active from August through October.

Southeastern plasterer bees live in scrub, pineland and sandhill habitats; adjacent open areas; and along roadsides. The giant scrub plasterer bee, Caupolicana floridana, has been found only in Florida, whereas its close relative, the plasterer bee, Caupolicana electa, has been recorded from north Florida to central North Carolina. Very little is known about the bees’ biology, said Jaret Daniels, curator at the Florida Museum’s McGuire Center for Lepidoptera and Biodiversity.

“Museum specimens are few and scattered, and our knowledge of their range is incredibly incomplete,” Daniels said. “These are highly overlooked bees. The whole idea behind this project is to fill in gaps in our understanding of these insects, primarily in Florida and Georgia.”

The bees’ flight season coincides with some of Florida’s best hiking weather and wildflower blooms, Daniels said. Nature lovers who spot Southeastern plasterer bees – or lookalike species – can upload photographs and information about the insects’ whereabouts to a special project page on iNaturalist, data that will help scientists map their range.

Slightly smaller and slenderer than bumblebees, Southeastern plasterer bees have a thick coat of tawny hair on their head, thorax and legs and a black abdomen that, in C. floridana, has narrow white bands. They are also loud buzzers.

“You’ll often hear these bees before you see them,” said Chase Kimmel, a postdoctoral researcher in the museum’s Daniels Lab. 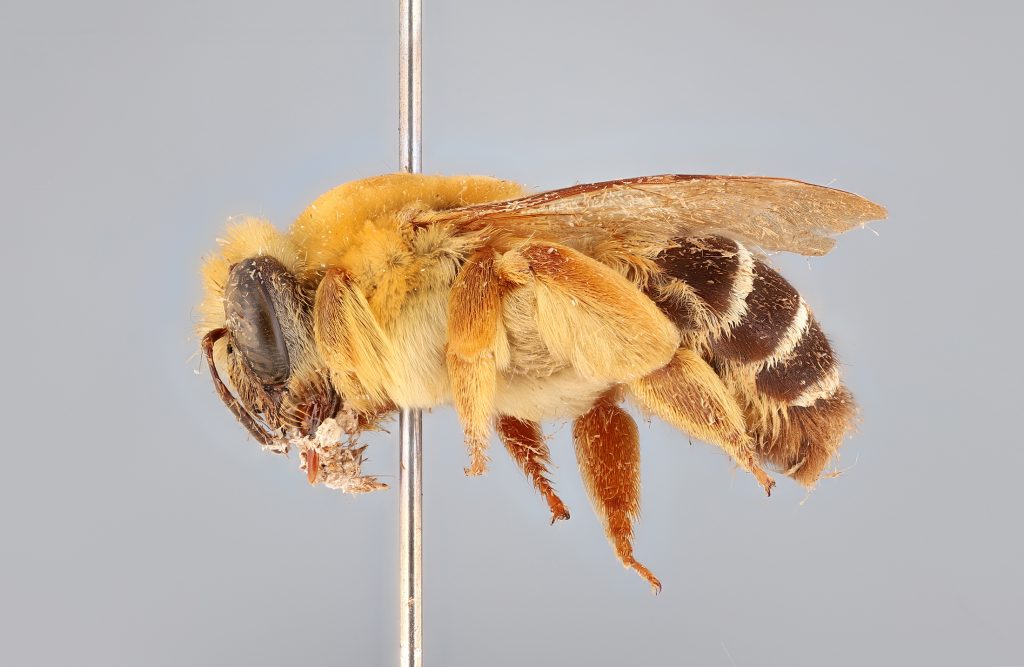 Both bee species have thick coats of yellow-orange hair. Caupolicana floridana also features white bands on its abdomen, as seen on this specimen.

Both Caupolicana floridana and electa are considered species of of conservation concern, but more information will help determine how rare these bees are, said entomologist Jaret Daniels.

While historical records place C. floridana as far south as Miami-Dade County, the most southern part of its range may now reach only to Lake Wales in Polk County, Daniels said.

These bees have a unique forked tongue characteristic of their family. Caupolicana floridana is also known as the Florida fork-tongue bee, and C. electa is sometimes called the Southeastern fork-tongue bee.

The bees spend the fall foraging for pollen and nectar, building an underground nest and laying eggs, Daniels said. Females of many species in the plasterer bee family line the tunnels of their nests with a cellophanelike coating for which the group is named.

The Daniels Lab often focuses on endangered and little-researched Florida insects and began more closely examining both species at the suggestion of Mark Deyrup, a retired entomologist from Archbold Biological Station near Lake Placid, where lab members were investigating another rare Florida species, the blue calamintha bee.

Caupolicana floridana was first described as a species in 2004, based largely on museum specimens, one even dating back to the late 1800s. It is considered a species of conservation concern. Its native habitats – open scrub, sandhills and pineland – are threatened ecosystems in Florida, often developed, fragmented or disturbed. These areas also depend on prescribed burns to keep other plant species from encroaching. Climate change poses an additional threat to wildlife whose life history is tightly connected to seasons and specific flowering plants, Daniels said.

Researchers have found nests of both species and plan to analyze their structures, which can reach depths of more than 3 feet, this fall.

“The more you see these bees in the wild, the more you want to know about them,” Kimmel said. “Pretty much anything you find out about these species is new. That’s what makes science fun.”