by Nikhil Srinivasan • May 7, 2020
Apart from its navy color, other identifying traits of the bee include the hairs on its face, the shape of its mandibles and how it bobs its head on flowers to pick up pollen. Florida Museum photo by Chase Kimmel

The Sunshine State’s iconic wildlife includes the American alligator, the Florida panther, the scrub jay and the manatee. But some species unique to Florida are less familiar, like the ultra-rare blue calamintha bee.

First described in 2011, scientists weren’t sure the bee still existed. The species had only been recorded in four locations totaling just 16 square miles of pine scrub habitat at Central Florida’s Lake Wales Ridge. But that changed this spring when a Florida Museum of Natural History researcher rediscovered the metallic navy insects, a first step to conserving this understudied and imperiled species.

“I was open to the possibility that we may not find the bee at all so that first moment when we spotted it in the field was really exciting,” said Chase Kimmel, a postdoctoral researcher.

Kimmel and his adviser, Jaret Daniels, director of the museum’s McGuire Center for Lepidoptera and Biodiversity, are working on a two-year research project to determine the blue calamintha bee’s current population status and distribution, as well as nesting and feeding habits. Florida’s State Wildlife Action Plan lists the bee, Osmia calaminthae, as a species of greatest conservation need, and this project could help determine whether it qualifies for protection under the Endangered Species Act. A U.S. Fish and Wildlife Service State Wildlife Grant administered by the Florida Fish and Wildlife Conservation Commission is funding the project.

The bee is thought to live only in the Lake Wales Ridge region, a globally recognized biodiversity hotspot and one of the nation’s fastest-disappearing ecosystems, according to a 2015 U.S. Fish and Wildlife Service report. As a pollinator, it depends on another threatened species, a blooming plant known as Ashe’s calamint.

“This is a highly specialized and localized bee,” Daniels said. 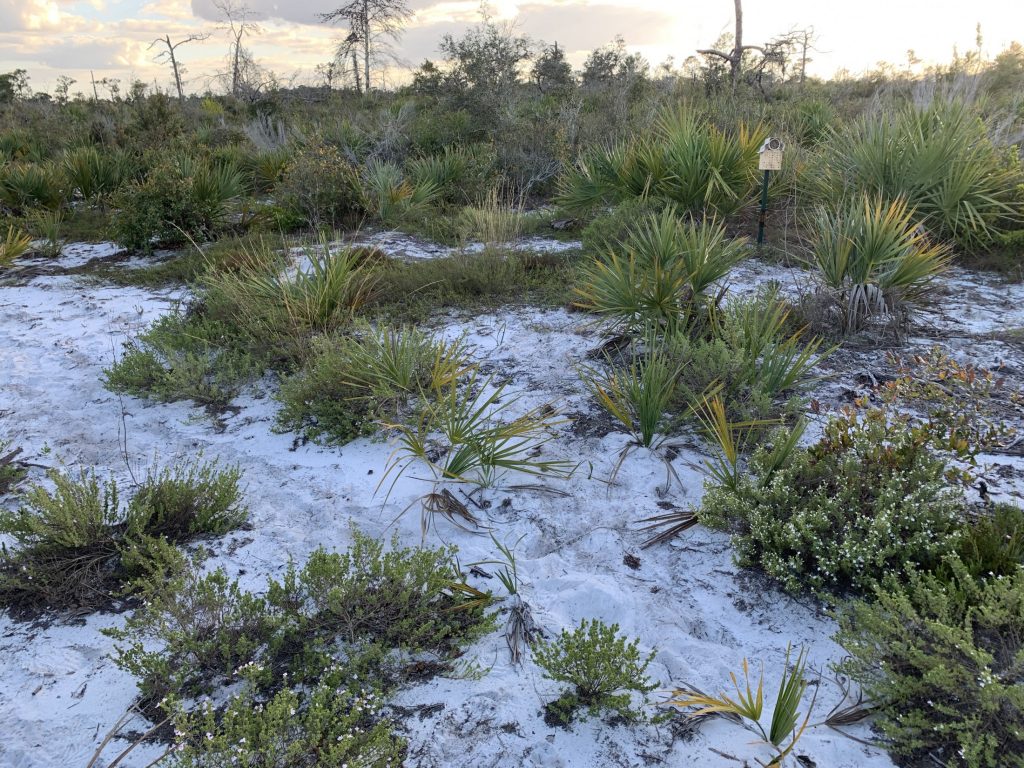 The isolated sand pine scrub habitats located in patches along the 150-mile-long Lake Wales Ridge is home to other endemic species like the Highlands tiger beetle. 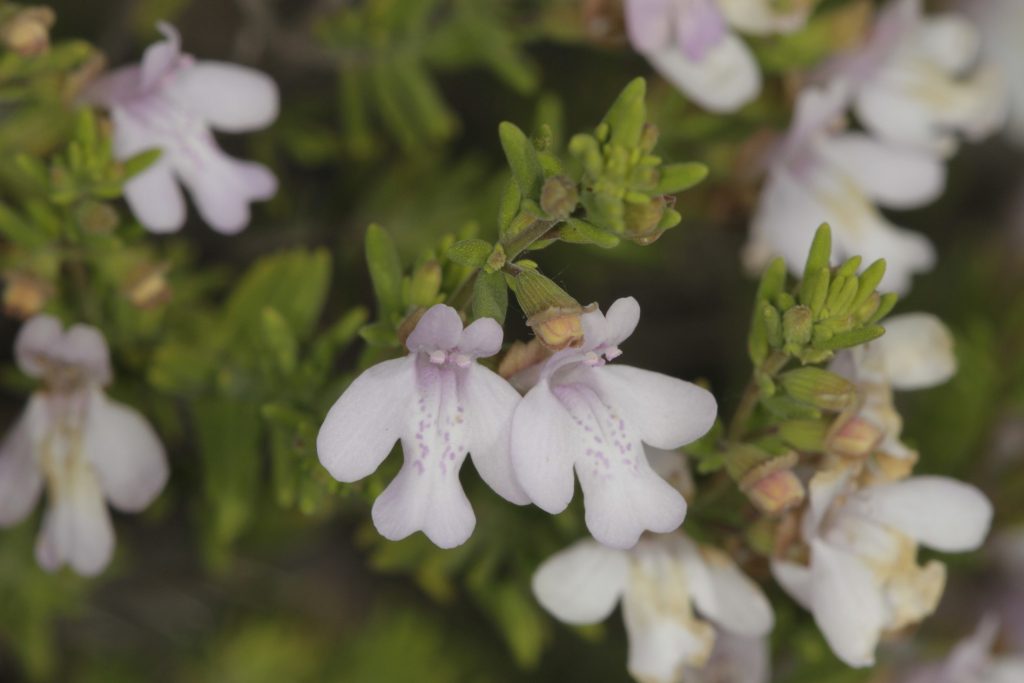 Like the bee, Ashe’s calamint is also fairly limited in its range, located only in parts of Florida and Georgia.

The Lake Wales Ridge’s rare species are a product of Florida’s geological history. When much of the state was underwater, higher elevation sand dune areas along the Central Florida ridge behaved almost like islands, producing isolated habitats. These unique environments led to pockets of specialized plants and animals, such as the blue calamintha bee, Daniels said. Today, the ridge is characterized by patches of pine scrub dotted among the orange groves along U.S. Route 27.

Kimmel has been living at the Archbold Biological Station near Lake Placid since March, getting a first-hand look at challenges to the bee’s survival.

“It’s one thing to read about habitat loss and development and another to be driving for 30-40 minutes through miles of orange groves just to get to a really small conservation site,” Kimmel said. “It puts into perspective how much habitat loss affects all the animals that live in this area.”

Kimmel’s initial goal was to find the bee, which was last observed in 2016. He recorded it in three of its previously known locations and six additional places up to 50 miles away – good news for the species. The objective over the next year is to record the bee in as many locations as possible to determine its range and increase understanding of its biology.

“We’re trying to fill in a lot of gaps that were not previously known,” Kimmel said. “It shows how little we know about the insect community and how there’s a lot of neat discoveries that can still occur.”

While visiting flowers, the blue calamintha bee bobs its head back and forth to pick up as much pollen as possible with its unusual facial hairs. Daniels and Kimmel also want to determine whether it visits other flowers apart from Ashe’s calamint by studying the pollen collected from bees and using visual surveys. So far, they have recorded one instance of the bee using another floral host.

The blue calamintha is a solitary bee, creating individual nests instead of hives like honeybees. While no nests have been found, the species is part of the genus Osmia, which tends to use existing ground burrows, hollow stems or holes in dead trees as nests.

To test whether this bee does the same, the research team made and deployed bee “condos,” 42 nest boxes, in locations where the bee or Ashe’s calamint have been found. Each box contains reeds and sand pine blocks with holes drilled in varying diameters and depths to reveal the bee’s nesting preferences. Researchers will periodically check the boxes over the next year.

With COVID-19 causing shutdowns around the world, however, Daniels and Kimmel’s research has faced some setbacks.

Kimmel initially received special permission from the University of Florida to continue working at the station, but the university’s prohibition on further travel prevented Daniels from joining Kimmel in the field.

The timing of the shutdown is also unfortunate as the bee’s flight season from about the middle of March until early May is the best time to find live insects and determine its range.

“It’s a very time-limited flight. Now is when the bulk of that activity has to take place,” Daniels said. “Chase is doing a fantastic job and we’re getting a lot of great data, but if it wasn’t for the COVID-19 virus we would have had more people in the field, so it has definitely scaled back what we’re able to do.”

Florida Museum volunteers provided much of the initial assistance for the project, including mapping and sorting potential sites of Ashe’s calamint. Their help was expected to continue with fieldwork at Archbold Biological Station and other parts of Lake Wales Ridge, but the pandemic has suspended volunteer operations.

Daniels and Kimmel are hopeful questions about the blue calamintha bee’s interaction with other insects and foraging behavior can be addressed when normal fieldwork resumes. But for now, Kimmel is adjusting to working like the bee itself – alone.

“All of this work is a collaboration,” Daniels said. “It takes an army to make it happen, you couldn’t do it without all the broader community of assistance that makes a project work to generate good results.”

Have you seen a blue bee? Find out which species you spotted with this helpful guide to Florida’s blue bees by UF/IFAS.