by Halle Marchese • April 27, 2020
Northern curly-tailed lizards live in a variety of habitats and can even thrive in a parking lot, said herpetologist Natalie Claunch. Known for eating anything that can fit in its gullet, the invasive northern curly tail has successfully established populations from Key West to Central Florida. Public domain image by Ian Morton

Feasting at a Cocoa Beach pizza parlor grease bin gave one northern curly-tailed lizard a record-breaking case of constipation. Mouthfuls of insects, an anole and greasy sand congealed into an unpassable glob of poop nearly 80% of the animal’s total body mass – the largest known feces-to-body-mass ratio recorded in a living animal.

“When we caught it, we just assumed the animal was ready to lay eggs,” said Natalie Claunch, a Ph.D. candidate in the University of Florida School of Natural Resources and Environment. “But when we went to feel for eggs, it just felt like it was full of Silly Putty.”

When Claunch and Edward Stanley, director of the Florida Museum’s Digital Discovery and Dissemination Laboratory, CT scanned the lizard, they found the massive fecal bolus lodged in its enlarged stomach. The bolus-to-body-mass ratio was more than six times greater than the previous record held by a Burmese python. 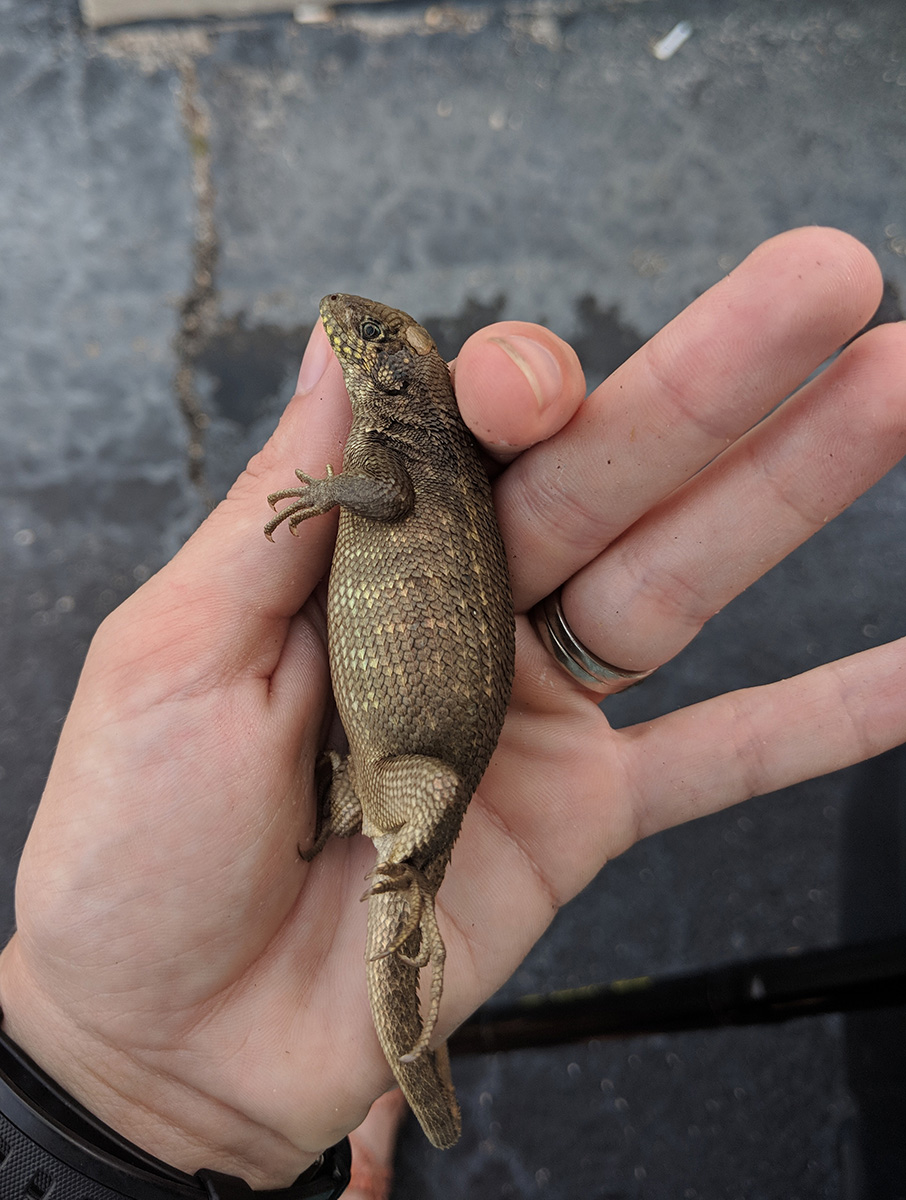 Nearly all of this northern curly tail’s digestion was halted by an impassable fecal bolus. Claunch said the lizard was “effectively starving because it could not ingest food or absorb nutrients from the bolus and had to metabolize its own organs for energy.”

“I was blown away by how little room there was left for all the other organs ­– if you look at the 3D model, it has only a tiny space left over in its ribcage for the heart, lungs and liver,” Stanley said. “It must have been a very uncomfortable situation for the poor lizard.”

Claunch said the female curly tail was likely hunting insects and smaller lizards lured to the parking lot bin by pizza grease – and inadvertently getting a dose of sand with each meal. The pear-shaped lizard was starving from being unable to digest the nutrient-depleted bolus, she said, and was humanely euthanized.

Native to the Bahamas, the Cayman Islands and Cuba, northern curly-tailed lizards were originally introduced to Florida in the early 1940s to combat sugar cane pests. Claunch said the species’ diet, which includes anything from bits of fish to cheese and crackers, likely put it at higher risk for fecal impaction.

“They’re like sparrows or gulls at a fry stand, without the chirping or swooping,” said Claunch, who studies the northern curly tail’s immune system, heat tolerance and adaptability in the lab of Christina Romagosa, assistant research professor in the department of wildlife ecology and conservation.

The northern curly-tailed lizard offers a key case study of how invasive populations can successfully establish themselves in Florida, Claunch said. By tracking the lizard’s populations from Key West to Orlando, researchers can better understand how to monitor and prevent reptile invasions across the U.S. In addition to potentially spreading parasites and disease, northern curly tails threaten native lizards’ food sources and prey on their hatchlings, contributing to the state’s decline in reptile diversity.

“New populations are still being reported and discovered – these lizards can hitchhike in cars, plant delivery trucks or boats, so they end up in a lot of disconnected places,” Claunch said. “We have so many invasive lizards in Florida that funding and person-power is typically directed toward ‘high priority’ species that are a direct threat to native threatened or endangered species, or to infrastructure, but the curly-tailed lizards’ successful spread makes it an interesting case.”

Claunch said an example of fecal impaction this extreme is a rare find in wild lizards, likely because they typically eat only small, passable amounts of sand or soil when capturing prey, and sluggish animals become easy targets for predators.

“We might not have noticed the fecal boluses we’ve found in some curly-tailed lizards if we hadn’t been capturing and examining hundreds for a physiology project,” Claunch said. “It just shows you never know what you’ll find when you least expect it.”

The researchers published their findings as a note in the Herpetological Review.

Funding for the research was provided by the U.S. Geological Survey Fort Collins Science Center Invasive Species Branch and the Florida Museum.

Underbite regained: Species feared extinct is the only frog with true teeth on its lower jaw