by Jerald Pinson • July 19, 2021
Pines, such as these in the Florida Everglades, need space and an abundance of light to grow. In the absence of fire, which keeps competitors in check, hardwood trees can overtake and transform these ecosystems. Photo courtesy of Miguel V., CC BY-SA 3.0

Plants are DNA hoarders. Adhering to the maxim of never throwing anything out that might be useful later, they often duplicate their entire genome and hang on to the added genetic baggage. All those extra genes are then free to mutate and produce new physical traits, hastening the tempo of evolution.

A new study shows that such duplication events have been vitally important throughout the evolutionary history of gymnosperms, a diverse group of seed plants that includes pines, cypresses, sequoias, ginkgos and cycads. Published today in Nature Plants, the research indicates that a genome duplication in the ancestor of modern gymnosperms might have directly contributed to the origin of the group over 350 million years ago. Subsequent duplications provided raw material for the evolution of innovative traits that enabled these plants to persist in dramatically changing ecosystems, laying the foundation for a recent resurgence over the last 20 million years.

“This event at the start of their evolution created an opportunity for genes to evolve and create totally new functions that potentially helped gymnosperms transition to new habitats and aided in their ecological ascendance,” said Gregory Stull, a recent doctoral graduate of the Florida Museum of Natural History and lead author of the study.

Taking a closer look at gymnosperms

While having more than two sets of chromosomes – a phenomenon called polyploidy – is rare in animals, in plants it is commonplace. Most of the fruits and vegetables we eat, for example, are polyploids, often involving hybridization between two closely related species. Many plants, including wheat, peanuts, coffee, oats and strawberries, benefit from having multiple divergent copies of DNA, which can lead to faster growth rates and an increase in size and weight.

Until now, however, it’s been unclear how polyploidy may have influenced the evolution of gymnosperms. Although they have some of the largest genomes in the plant kingdom, they have low chromosome numbers, which for decades prompted scientists to assume that polyploidy wasn’t as prevalent or important in these plants.

Gymnosperm genetics are also complex. Their large genomes make them challenging to study, and much of their DNA consists of repeating sequences that don’t code for anything.

“What makes gymnosperm genomes complex is they seem to have a proclivity for accumulating lots of repetitive elements,” said study co-author Douglas Soltis, Florida Museum curator and University of Florida distinguished professor. “Things like ginkgos, cycads, pines and other conifers are loaded with all this repetitive stuff that has nothing to do with genome duplication.”

However, a recent collaborative effort among plant biologists, including Soltis, to obtain massive numbers of genetic sequences from more than 1,000 plants has opened new doors for scientists attempting to piece together the long history of land plant evolution. Stull, now a postdoctoral researcher at the Chinese Academy of Sciences’ Kunming Institute of Botany, and his colleagues used a combination of these data and newly generated sequences to give gymnosperms another look.

By comparing the DNA of living gymnosperms, the researchers were able to peer back in time, uncovering evidence for multiple ancient genome duplication events that coincided with the origin of major groups.

Gymnosperms have undergone significant extinctions throughout their long history, making it difficult to decipher the exact nature of their relationships. But the genomes of all living gymnosperms share the signature of an ancient duplication in the distant past, more than 350 million years ago. More than 100 million years later, another duplication gave rise to the pine family, while a third led to the origin of podocarps, a group containing mostly trees and shrubs that today are primarily restricted to the Southern Hemisphere.

In each case, analyses revealed a strong link between duplicated DNA and the evolution of unique traits. While future studies are needed to determine exactly which traits arose due to polyploidy, possible candidates include the strange egglike roots of cycads that harbor nitrogen-fixing bacteria and the diverse cone structures found across modern conifers. Podocarp cones, for example, are highly modified and look deceptively like fruit, said Stull: “Their cones are very fleshy, have various colors and are dispersed by different animals.” 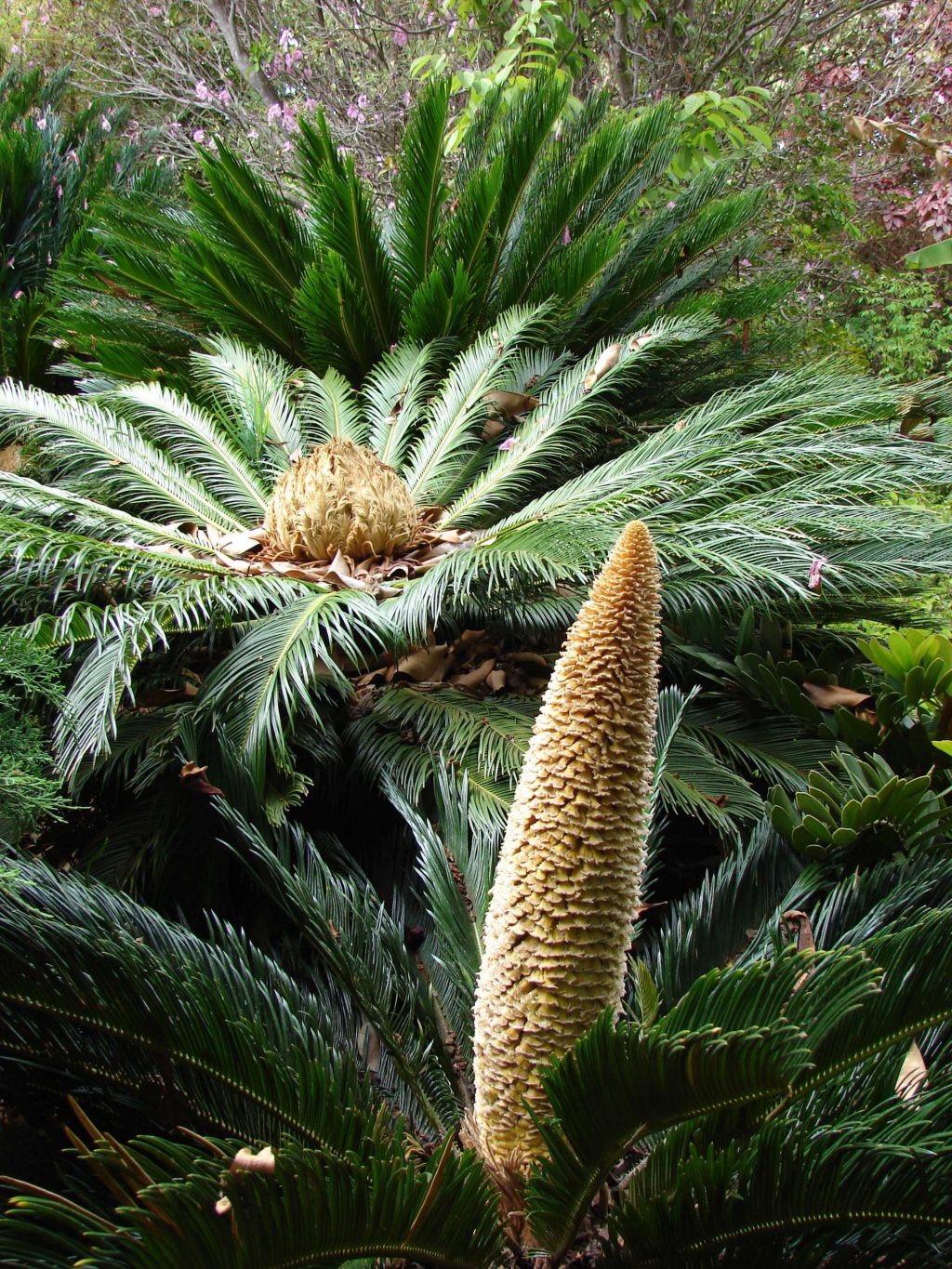 Cycads, such as this sago palm, have bulbous, egglike roots that harbor nitrogen-fixing bacteria. Since nitrogen can be a limited nutrient in many terrestrial ecosystems, this gives cycads a competitive advantage over the plants that grow around them. 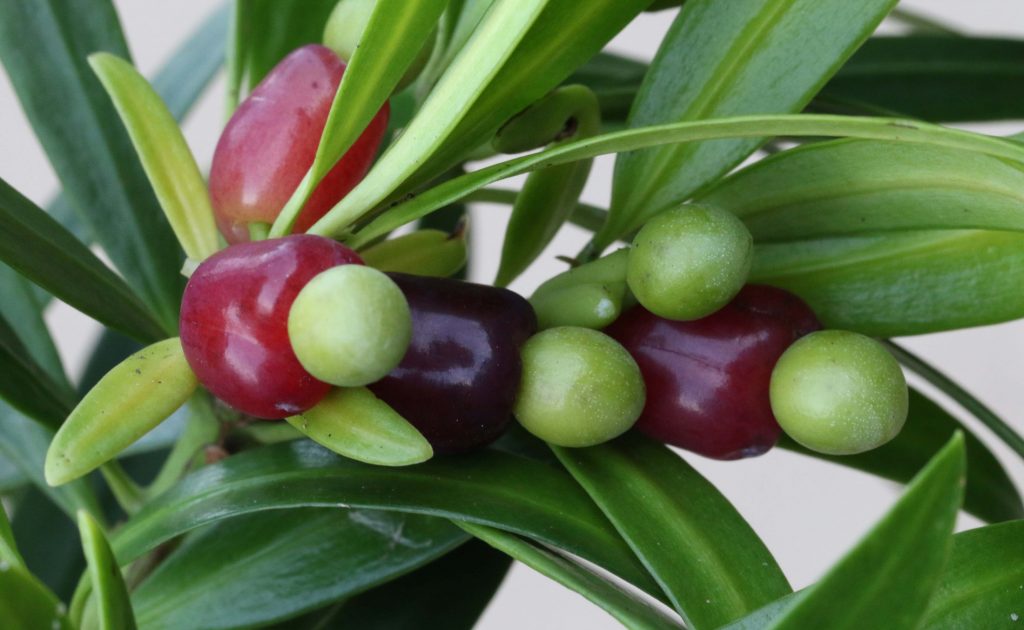 Many of the cones in the podocarp family, such as those produced by the Podocarpus polystachyus shown here, look superficially similar to the fruit of some flowering plants. 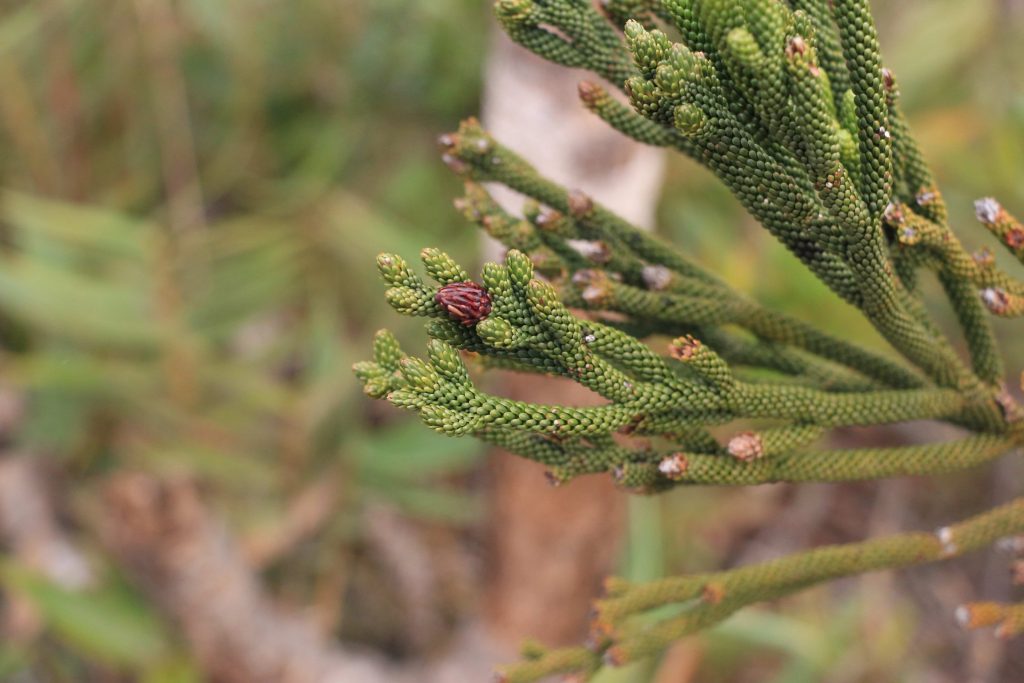 The diversity in cone structure, color, shape and size across gymnosperms, as evidenced by this female cone of the species Callitris pancheri, may have arisen as a result of multiple genome duplications.

Competition and climate change led to extinction and diversification

Stull and his colleagues also wanted to know whether genome duplications influenced the rate at which new gymnosperm species evolved through time. But instead of a clear-cut pattern, they found a complex interplay of extinction and diversification amidst a backdrop of a significantly changing global climates.

Today, there are about 1,000 gymnosperm species, which may not seem like many when compared with the 300,000 or so species of flowering plants. But in their heyday, gymnosperms were much more diverse.

Gymnosperms were still thriving prior to the asteroid extinction event 66 million years ago, best known for the demise of dinosaurs. But the dramatic ecological changes brought about by the impact tipped the scales: After the dinosaurs disappeared, flowering plants quickly began outcompeting gymnosperm lineages, which suffered major bouts of extinction as a result. Some groups were snuffed out entirely, while others barely managed to survive to the present. The once flourishing ginkgo family, for example, is today represented by a single living species.

But the results from this study indicate that at least some gymnosperm groups made a comeback starting around 20 million years ago, coinciding with Earth’s transition to a cooler, drier climate.

“We see points in history where gymnosperms didn’t just continue to decline, but they actually diversified in species numbers as well, which makes for a more dynamic picture of their evolutionary history,” said co-author Pamela Soltis, Florida Museum curator and UF distinguished professor.

While some gymnosperms failed to cope with the dual specter of climate change and competition, others had an advantage in certain habitats due to the very traits that caused them to lose out in their ancient rivalry with flowering plants. Groups such as pines, spruces, firs and junipers got fresh starts.

“In some respects, gymnosperms maybe aren’t that flexible,” Pamela Soltis said. “They kind of have to ‘wait around’ until climate is more favorable in order for them to diversify.”

In some environments, gymnosperms adapted to live at the extremes. In pine forests of southeastern North America, longleaf pines are adapted to frequent fires that incinerate their competition, and conifers dominate the boreal forests of the far north. But take away the fire or the cold, and flowering plants quickly start to encroach.

While gymnosperms are still in the process of diversifying, they’ve been interrupted by human-made changes to the environment. Currently, more than 40% of gymnosperms are threatened by extinction due to the cumulative pressures of climate change and habitat loss. Future studies clarifying how their underlying genetics enabled them to persist to the present may give scientists a better framework for ensuring they survive well into the future.

“Even though some conifer and cycad groups have diversified considerably over the past 20 million years, many species have highly restricted distributions and are at risk of extinction,” Stull said. “Efforts to reduce habitat loss are likely essential for conserving the many species currently threatened by extinction.”

The researchers published their findings in Nature Plants.