by Natalie van Hoose • October 21, 2019
The development of the proboscis, a coiled straw-like mouthpart that can suck up nectar and other fluids, helped boost the diversity of Lepidoptera. Here, a tiger longwing, Heliconius hecale, drinks from a flower. Florida Museum photo by Eric Zamora

Butterflies and moths rank among the most diverse groups in the animal kingdom, with nearly 160,000 known species, ranging from the iconic blue morpho to the crop-devouring armyworm.

Scientists have long attributed these insects’ rich variety to their close connections with other organisms. Butterflies, they hypothesized, evolved in tandem with the plants they fed on, and moths developed sophisticated defense mechanisms in response to bats, their main predators.

Now, a new study examines these classic hypotheses by shining a light on the early history of Lepidoptera, the order that includes moths and butterflies. Using the largest-ever data set assembled for the group, an international team of researchers created an evolutionary family tree for Lepidoptera and used fossils to estimate when moths and butterflies evolved key traits.

Their findings show that flowering plants did drive much of these insects’ diversity. In a surprise twist, however, multiple moth lineages evolved “ears” millions of years before the existence of bats, previously credited with triggering moths’ development of hearing organs.

“Having a fossil-dated family tree gives us our most detailed look yet at the evolutionary history of moths and butterflies,” said the study’s lead author Akito Kawahara, University of Florida associate professor and curator at the Florida Museum of Natural History’s McGuire Center for Lepidoptera and Biodiversity. “We’ve thought for a long time that flowering plants must have contributed to the extraordinary number of moth and butterfly species we see today, but we haven’t been able to test that. This study helps us see if prior hypotheses line up, and what we find is that the plant hypothesis does, but the bat hypothesis does not.”

A seminal 1964 paper by Paul Ehrlich and Peter Raven used the tightly interwoven relationships between butterflies and flowering plants as the foundation for the theory of coevolution – the idea that different organism groups evolve in response to one another.

As plants developed toxins to ward off hungry caterpillars, they reasoned, butterflies evolved ways of tolerating them. Plants, in turn, would ramp up their weaponry, and the cycle of one-upmanship continued.

Similarly, scientists, including Kawahara, have cited bats as the driving force behind moths’ evolution of special defenses, including ultrasonic-sensitive hearing organs, sonar jamming and long, twisted tails that can deflect an attacker in flight. 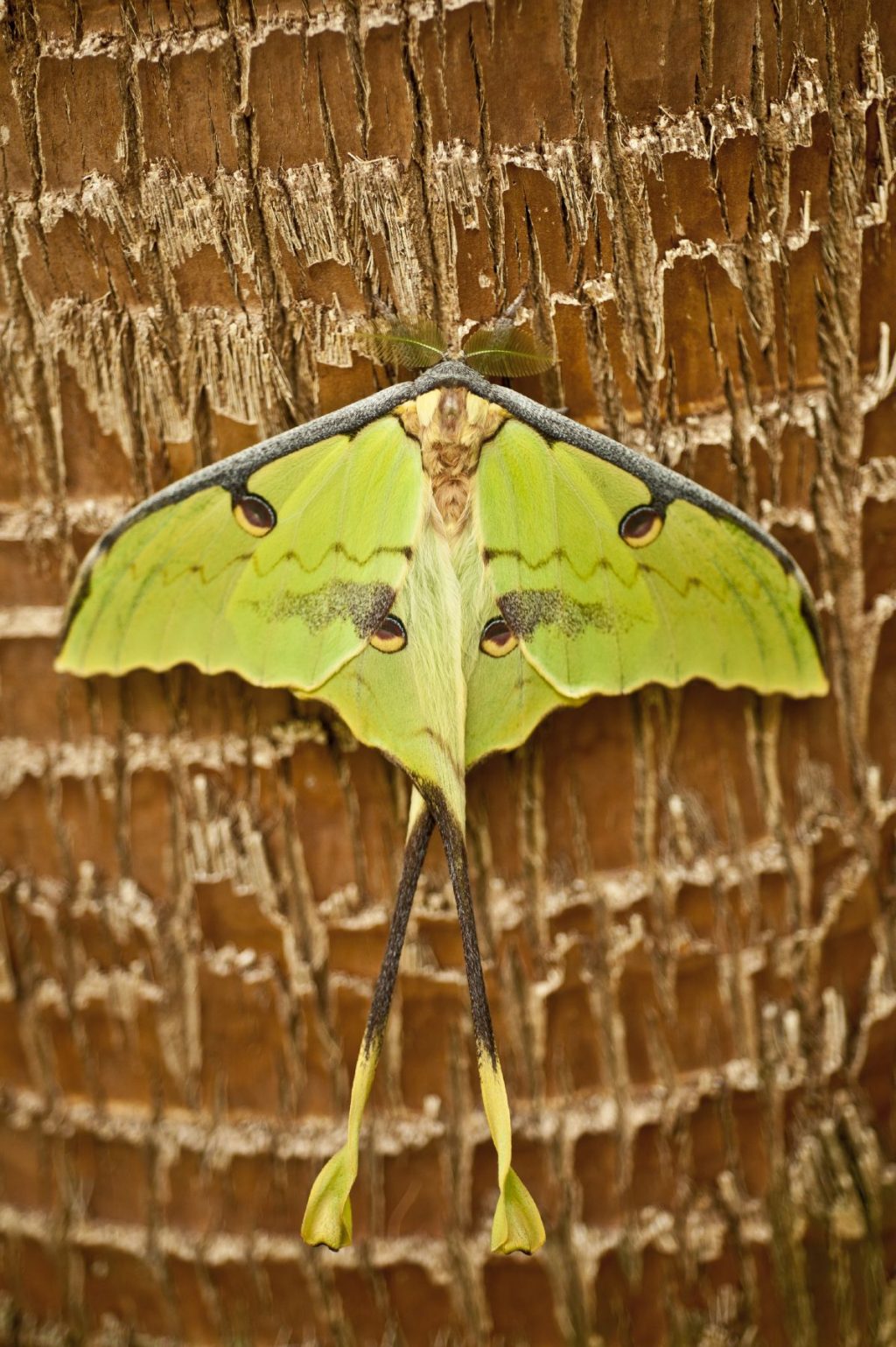 Moths have evolved sophisticated defenses, including the long, twisted tails seen on this African moon moth, Argema mimosae, that can help protect it from bats. But bats can’t take credit for all moth defense mechanisms: Multiple moth lineages evolved “ears” millions of years before bats existed. 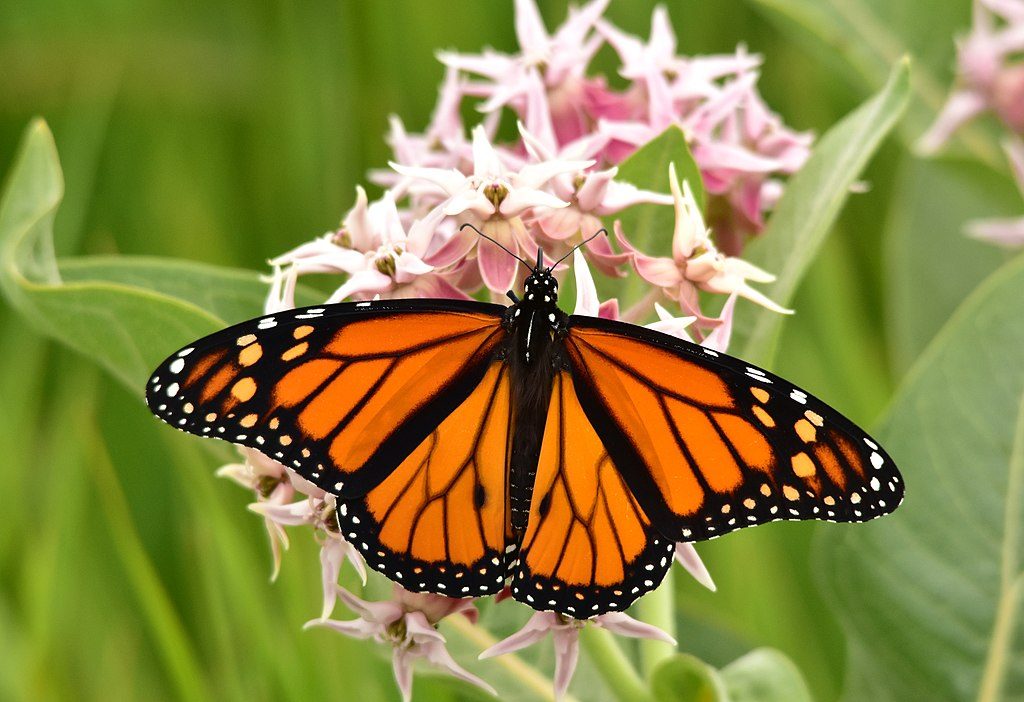 As plants developed toxins, hungry caterpillars evolved ways of tolerating them. The monarch, Danaus plexippus, co-opted the chemicals found in milkweed plants for its own defense. 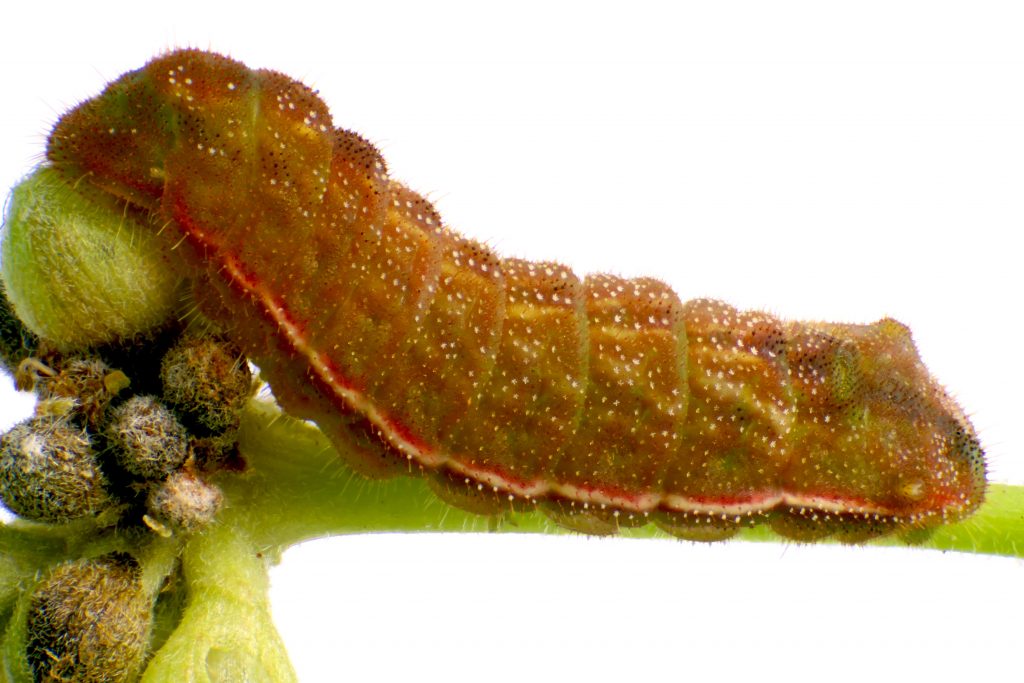 Miami blue butterfly larvae range in color from green to brown to red, blending in with their host plants, the gray nickerbean and Florida Keys blackbead.

Cross-examining these hypotheses requires a trip back in deep time – no easy task with a group of insects that is notoriously rare in the fossil record. Further complicating matters, fossils are often tricky to identify accurately as a moth or butterfly, Kawahara said. One originally labeled as Lepidoptera was later revealed to be a leaf.

Kawahara’s team used two analytical approaches to avoid making the same mistake. They examined previous studies of Lepidoptera fossils, tossing out any examples that seemed questionable. They vetted the 16 remaining fossils with other lepidopterists, looking for consensus that they really represented moths and butterflies. They then used these fossils to date their evolutionary tree, built from more than 2,000 genes from 186 existing moth and butterfly species. To double-check those dates, they carried out the same analysis using just three fossils, each displaying all the hallmark characteristics of a particular Lepidoptera group.

A major shocker was the fossil-dated tree’s revelation that nocturnal moths evolved hearing organs nine separate times, four of which occurred around 91 million years ago – about 30 million years before bats dominated the night sky.

What could moths have been listening to in a pre-bat world?

“We don’t know,” Kawahara said. He and study co-author Jesse Barber, a bat expert and associate professor at Boise State University, hypothesize that “they probably used these hearing organs to detect the sounds made by other predators, like footfall, flight or rustling, and later co-opted them to pick up on bat sonar.”

Many moths and a few butterflies have “ears” on various parts of the body, depending on the family. The majority of hearing organs, however, are near the wings, the optimal location for swiftly cueing an insect to move toward or away from a sound, said study co-author Jayne Yack, a professor of neuroethology at Carleton University in Ottawa, Ontario.

“It makes sense to have your ears close to flight machinery, if your response to sound is to escape by flight,” she said. 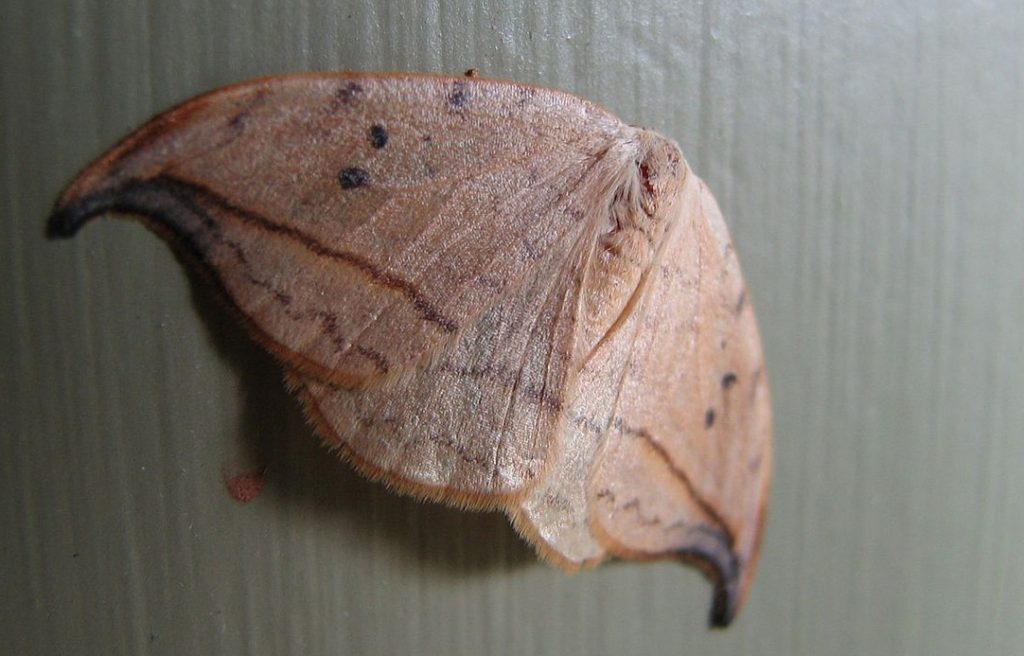 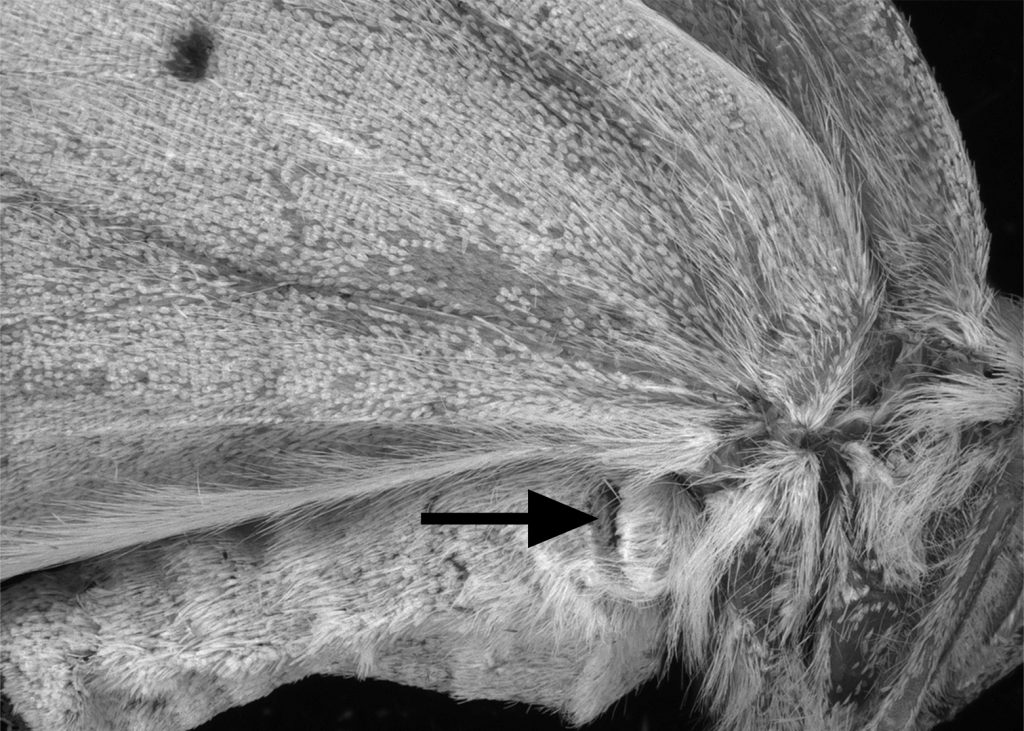 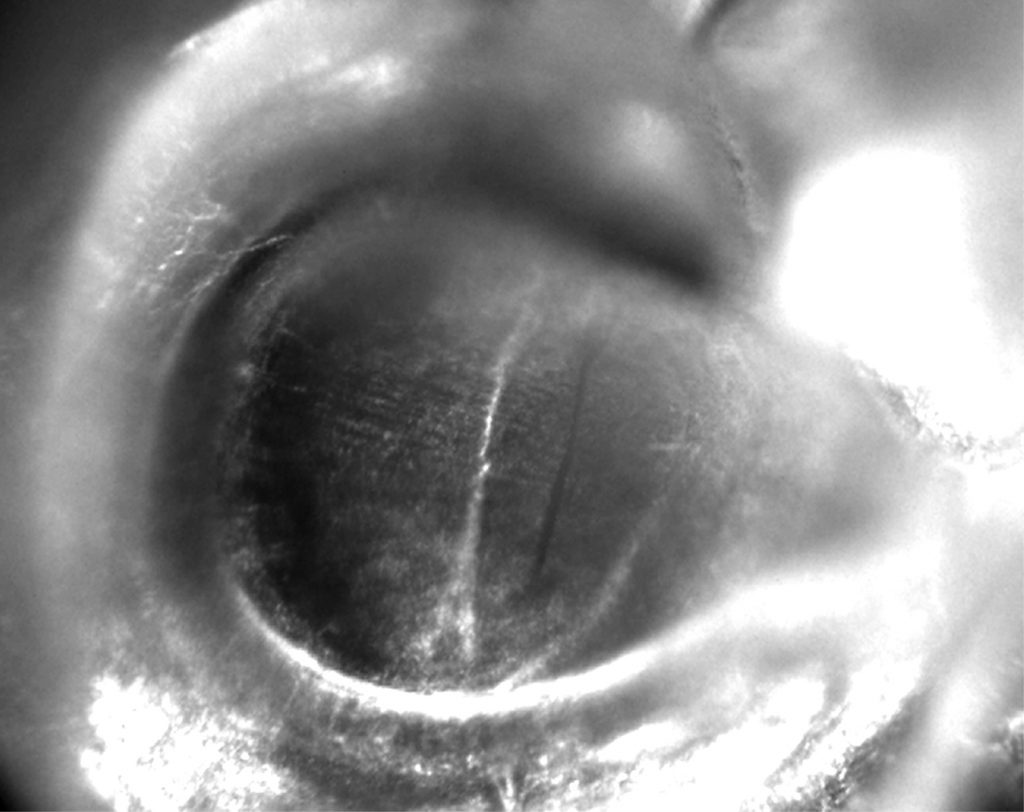 Insect ears, like this one on Drepana arcuata, evolved from pre-existing sensory organs called proprioceptors, which monitor the body’s movement, Yack said. “In a sense, it’s ‘easy’ for an insect to make an ear with some adjustments to the external cuticle layer of the body,” she said.

While the finding that some of these organs predated bats came as a surprise, Yack cautioned against jumping to the conclusion that there is no connection between bats and moths’ ability to hear. She pointed out that many species with ears appear just prior to the proposed time when bats developed echolocation, “so something around that time period appears to have been an important selection pressure.”

“The vast majority of ears in today’s Lepidoptera are sensitive to ultrasound, and at least some of them have been shown to function in evading bats,” she said. “Some also evolved after bats first used echolocation. But the evidence does require that we reconsider the currently held assumption that all ears in nocturnal Lepidoptera evolved in response to bat echolocation.”

Nectar straw was a game-changer

The earliest moths likely tunneled and fed inside non-vascular plants such as bryophytes as larvae and had chewing mouthparts as adults. The development of the proboscis, a coiled straw-like mouthpart that can suck up nectar, plant sap and other fluids, helped moth diversity rocket off, Kawahara said. More than 99% of today’s moths and butterflies have a proboscis.

The fossil-dated tree puts the origin of the proboscis around 241 million years ago, coinciding with the time when flowering plants were quickly diversifying. The proboscis helped early moths access nectar and may have enabled them to fly farther and colonize new host plants.

Butterflies, a much younger and less diverse group than moths, did not originate until about 100 million years ago and are just day-flying moths, Kawahara said.

“This study underscores previous studies that show butterflies really belong in the much bigger group of moths,” he said. “We tend to appreciate butterflies because they’re often flashy and charismatic, but we shouldn’t forget about moths, which can be just as striking. Moths and plants were interacting some 50 million years before the first dinosaur roamed the Earth, and those interactions helped lead to the diversity we see on our planet today.”

The researchers published their findings in the Proceedings of the National Academy of Sciences.

Funding for the research was provided by the National Science Foundation, China National GeneBank, BGI and German Research Foundation.