New hawk moth species are among the smallest ever discovered

by Brian V Smith • July 11, 2022
Researchers have discovered three new species of hawk moths endemic to The Bahamas, among the smallest ever discovered in the family. Florida Museum photo by Kristen Grace

Hawk moths are known for being some of the largest night fliers in the insect world. With wingspans of more than four inches, many species are big enough to comfortably fill the palm of your hand. Thanks to the work of a small team of researchers at the Florida Museum of Natural History, three new species from The Bahamas are breaking records at the opposite end of the size spectrum. At about the length of a vitamin pill, they are among the smallest ever discovered.

“By comparison, we have a few other small hawk moths like the hummingbird moth, but of all of them these new species are the smallest,” said Deborah Matthews, a biological scientist at the Florida Museum of Natural History’s McGuire Center for Lepidoptera and Biodiversity. Matthews recently co-authored a study on the new species published in the journal Insecta Mundi.

How do new species get discovered?

Hawk moths are a diverse group of insects, with some 1,700 species worldwide. In addition to their remarkable wingspans, they also have incredibly long proboscises, the straw-like tongues they use to siphon nectar. The title for the world’s largest proboscis is held by a hawk moth endemic to Madagascar, which comes in at just under 12 inches when fully unfurled.

The variation in the length of their tongues comes in handy for researchers, who often use it to predict what local flowers they feed on, and vice versa. This method was first used by Darwin, who correctly predicted the existence of a hawk moth in Madagascar with a long proboscis upon observing an orchid with unusually long nectar spurs.

The study that led to the discovery of the new Caribbean species began when Matthews and Florida Museum Lepidoptera curator Jacqueline Miller were going through the museum’s hawk moth collection to identify Bahamas specimens and sort survey material island by island.

But identifying new moth and butterfly species is not always as simple as measuring a proboscis. Sometimes there can be a telltale wing pattern that gives a species away, like the observable yet subtle differences between monarch and viceroy butterflies, for example. For closely related moths, however, these differences are often not as cut and dry. To tell for sure, researchers must study their anatomy. For Matthews and Miller, that meant making a detailed examination of the moths’ genitalia.

“You just can’t always make out distinctive wing patterns, whereas with genitalia you can cross-compare structures,” Matthews said. 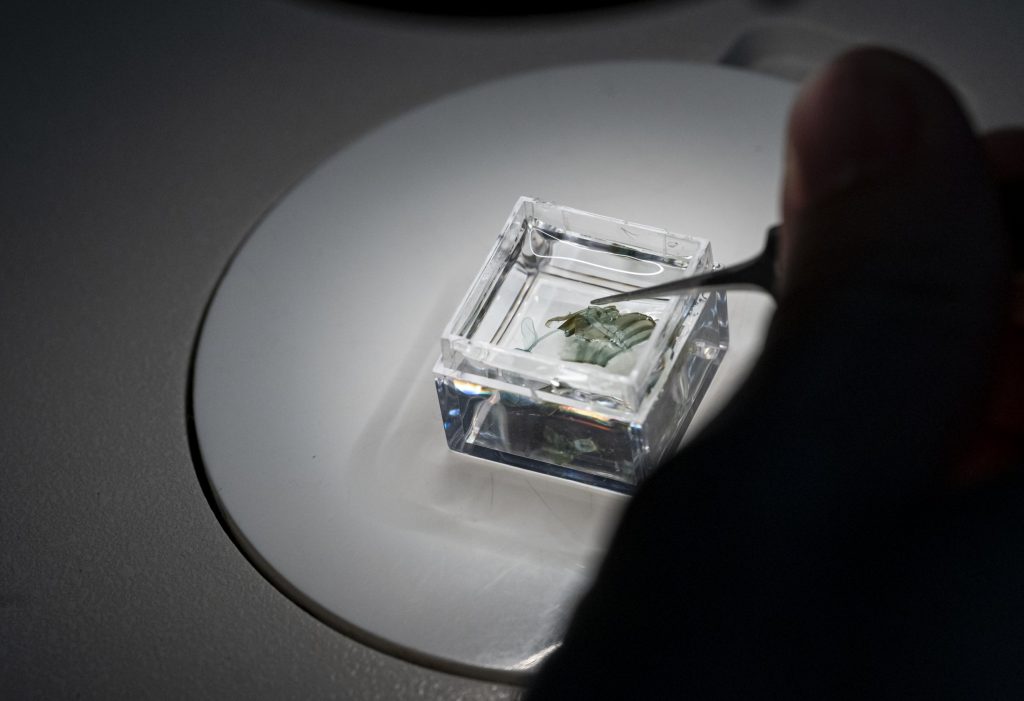 Genitalia are examined in glycerin after treatment in a potassium hydroxide solution to remove fat and muscle tissue. 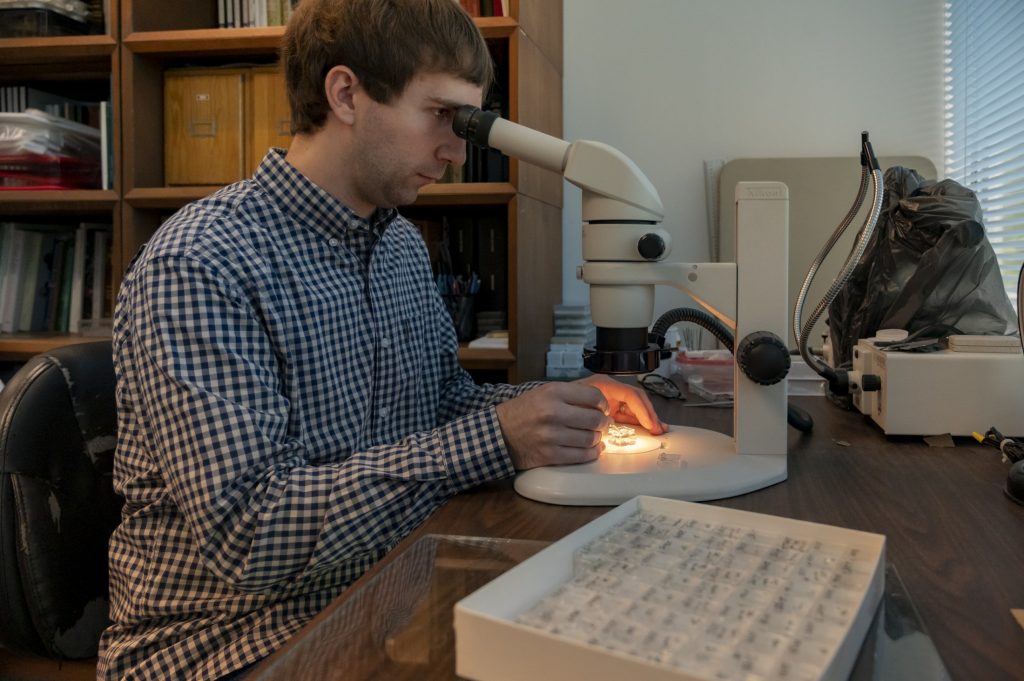 Riley Gott was brought onto the team to help with DNA sequencing and analysis while also working on his master’s degree. 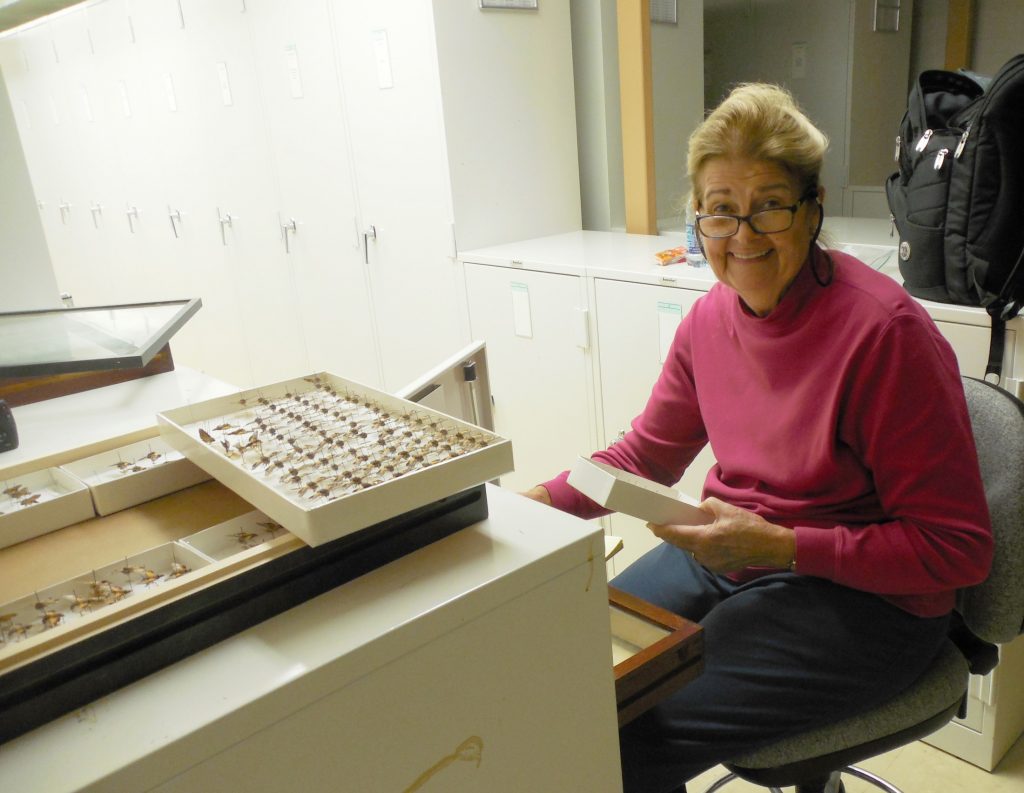 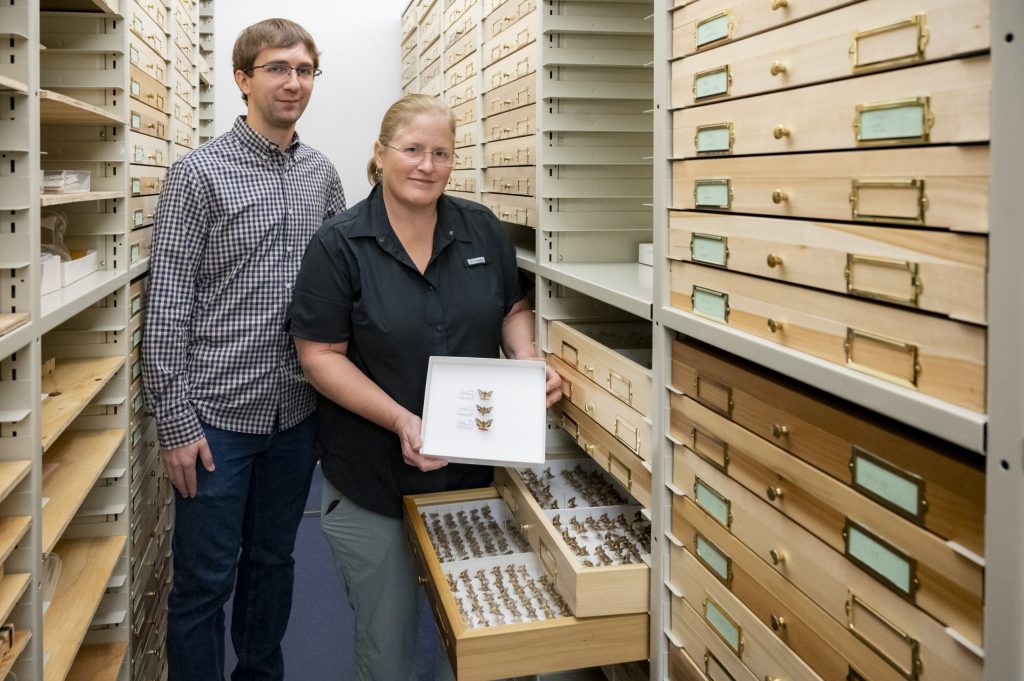 The researchers have added the newly labeled type specimens, the individuals that best represent the new species, to the Lepidoptera collection at the Florida Museum of Natural History.

The genitalia from the specimens in question were dissected and observed under a microscope, and the differences were striking. Matthews and Miller suspected that they had three new species on their hands. To be sure, they worked with Florida Museum technical research assistant Riley Gott to sequence DNA from specimens. The analysis of DNA sequences confirmed their suspicions.

“In terms of moths, the giant silk moths and hawk moths are very popular and well-studied, kind of like the butterflies of the moth world. So for us to find three new hawk moth species, that’s a really big deal,” Matthews said of their discovery.

The life histories of the three new species are unknown, but the caterpillars are suspected to feed on plants in the coffee family, Rubiaceae, based on the food preferences of related species.

Why are they so small?

Working with species like these in The Bahamas is an interesting task, with the biodiversity of the islands making them very alluring. Remote locations tend to create highly unique species. Islands like Madagascar and those in the Galapagos have some of the strangest animals on Earth when compared to mainland species. The islands of The Bahamas are similar, with their proximity to diversity hotspots like Cuba and mainland areas of Mexico and the U.S making it easier for plants and animals to spread there, where they can evolve into new species on the islands due to their isolation.

At first glance, it might seem surprising that the new moth species are so small, given they are endemic to The Bahamas. Island ecosystems are famous for organisms that far outsize their mainland relatives, like the giant tortoises on the Galapagos Islands and the Komodo dragons on several Indonesian islands. 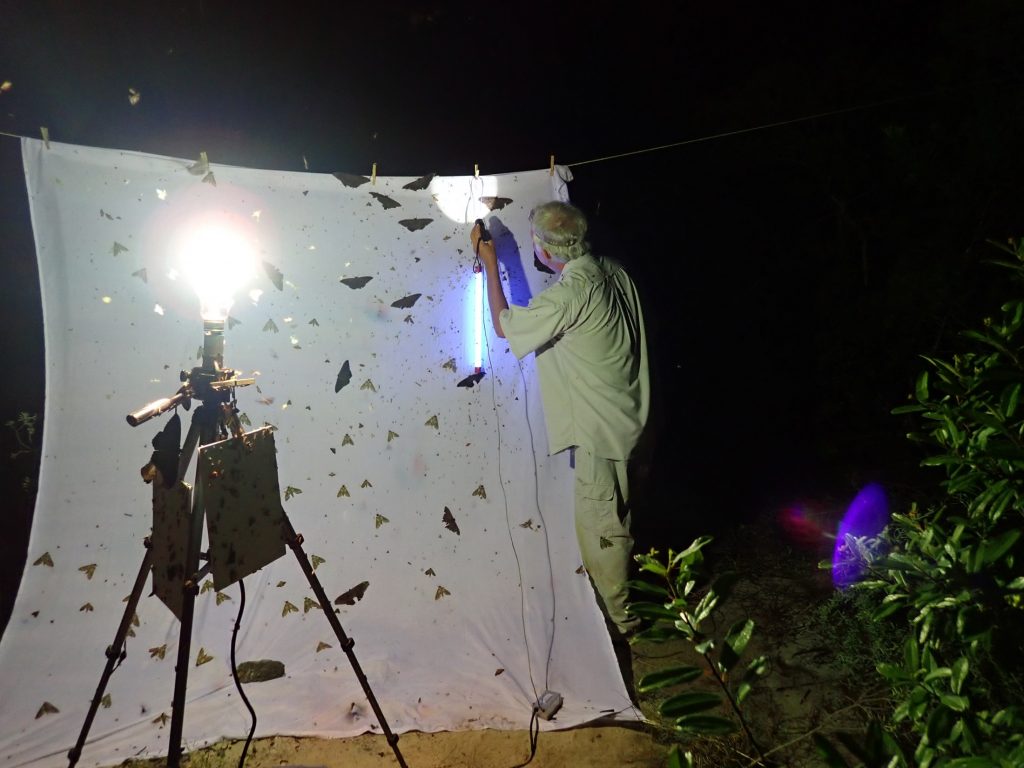 The best way to catch a moth is to let it come to you, which researchers accomplish by setting up white sheets illuminated by an irresistible beam of light. 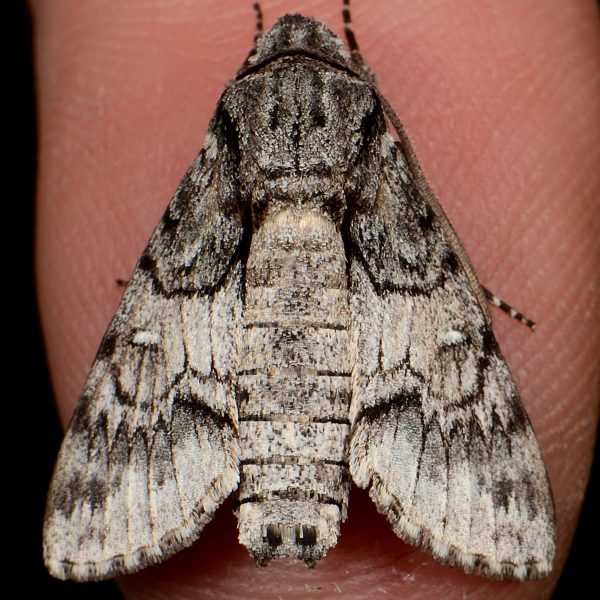 Cautethia gossi was named after Gary Goss, a seasoned member of the field team who assisted with both specimen collecting and photography. 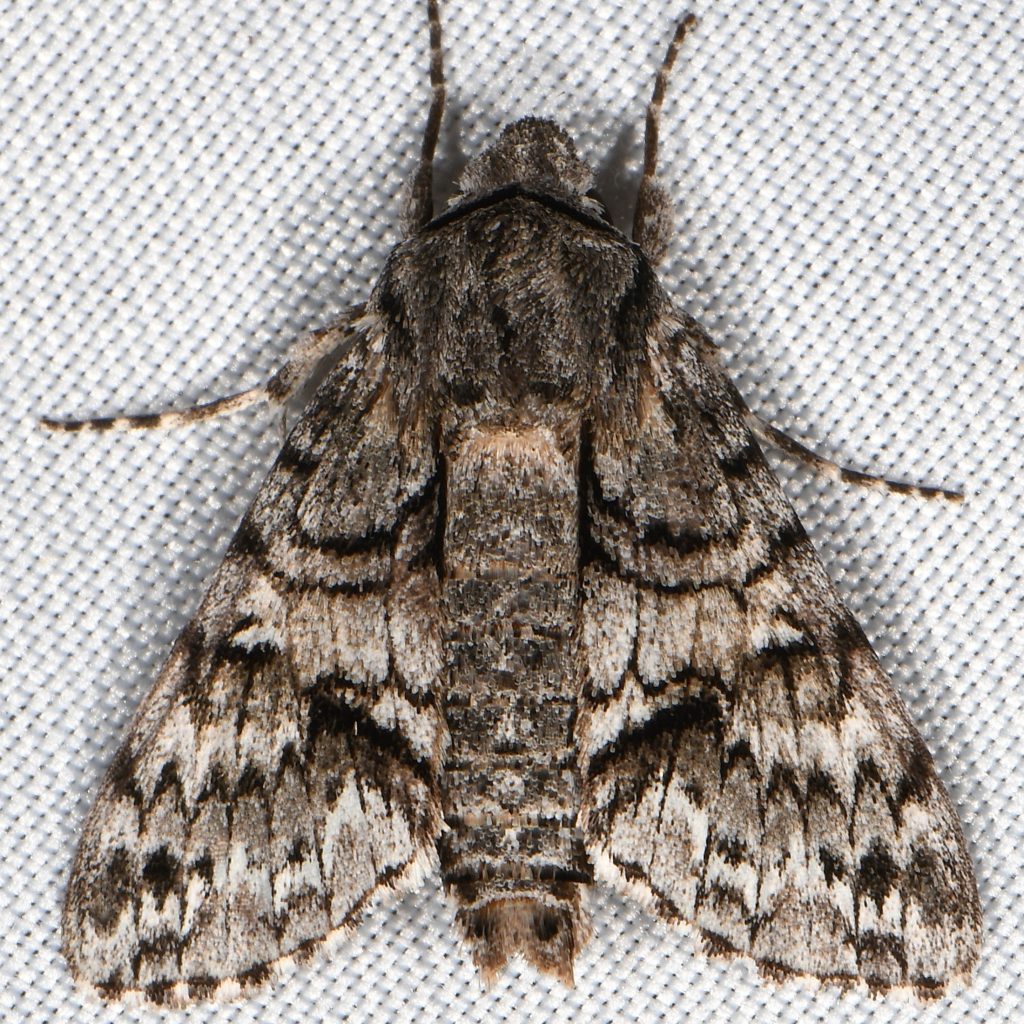 Cautethia simoni was named after Mark Simon, an important contributor to butterfly and moth collections and active surveyor of Bahamas butterflies since the 1980s. 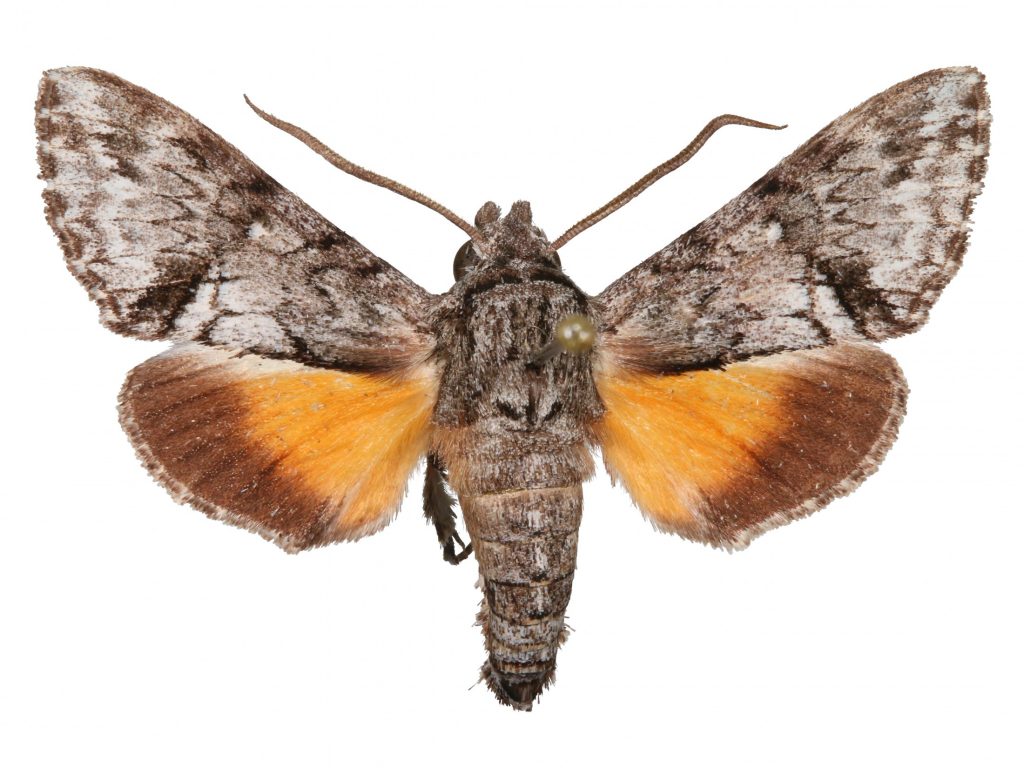 Cautethia geraceorum got its name from Kathy and Donald Gerace, both of whom spent years studying the biology, geology and archaeology of the Caribbean Islands and helped establish the Gerace research Centre on San Salvador.

Researchers suspect that harsh weather extremes could be the cause, as islands in the Bahamas archipelago are often among the first areas affected by Atlantic hurricanes and tropical storms at the peak of their power. Heavy rain and windfall can threaten entire populations on the islands, and it is possible that butterflies and moths with smaller wings are better equipped to survive the intense winds. Outside of rainy seasons, islands in The Bahamas have a tendency to get very dry for the rest of the year, with drought-like conditions that likely reduce the amount of food available for caterpillars.

The identification of these three new species will likely lead to more going forward. Before their identification as a new species, these specimens were lumped together as morphospecies, a group of organisms that all look similar. Individuals in a morphospecies may have slight differences that distinguish them, however, such as the genitalia in these moths. These groups are set aside in museums until they can be examined more closely.

According to Miller and Matthews, there are approximately 1,000 morphospecies of moths identified in The Bahamas. About 71% of those have been previously named, meaning the identity of the remaining 29% is still ambiguous. Studying all of them to identify which are separate species is a lot of work, often requiring the help of specialists with a trained eye, but according to Matthews, “Sometimes it just takes diving in yourself and learning the terminology for a certain group.”

The authors published their study in the journal Insecta Mundi.

Funding for the study was partially provided by the National Geographic Society.

40 years of friendship, 70,000 specimens: Amateur entomologists donate lifetimes’ worth of butterflies and moths