But the opponents aren’t tricked-out fighter jets. They’re bats and moths, adversaries locked in a 60-million-year-old duel marked by stealth and deception.

Previous work by University of Florida and Boise State University researchers showed that some silk moths in the family Saturniidae have a built-in bat decoy: hindwings with long, elaborate “tails” that deflect sonar, creating a misleading target. As bats swoop in for the kill, they often strike these expendable tails and not the moth’s vital body core.

Now, a new study by the team, published today in Science Advances, illuminates the bat-driven evolution of these decoys across the silk moth family tree and tests four hindwing shapes in real-time dogfights between bats and moths. The verdict? The larger the hindwings and longer the tails, the better the moths’ chances of escaping bats on the hunt.

“Once we knew that the tails of silk moths deflect echoes away from their body, we were interested in whether there were optimal anti-predator shapes,” said study co-author Akito Kawahara, associate curator at the Florida Museum of Natural History’s McGuire Center for Lepidoptera and Biodiversity at UF. “One of the first things we did was go into the collections and look at specimens. There was a ton of variation in hindwing length, shape, color and twisting. We wanted to analyze these characteristics in an evolutionary framework to see what was happening.”

Kawahara and his postdoctoral researcher Chris Hamilton, one of the study’s co-lead authors, quantified hindwing shape in silk moths, mapping the evolution of this trait across a detailed family tree. Instead of gradual increases in hindwing length and complexity, they noted abrupt shifts in shape, showing that certain wing shapes might be significantly more effective at deflecting bats than others. Four classes of shapes were linked with moths’ ability to escape bat attack: two types of extra-long tails, short tails and long lobes. 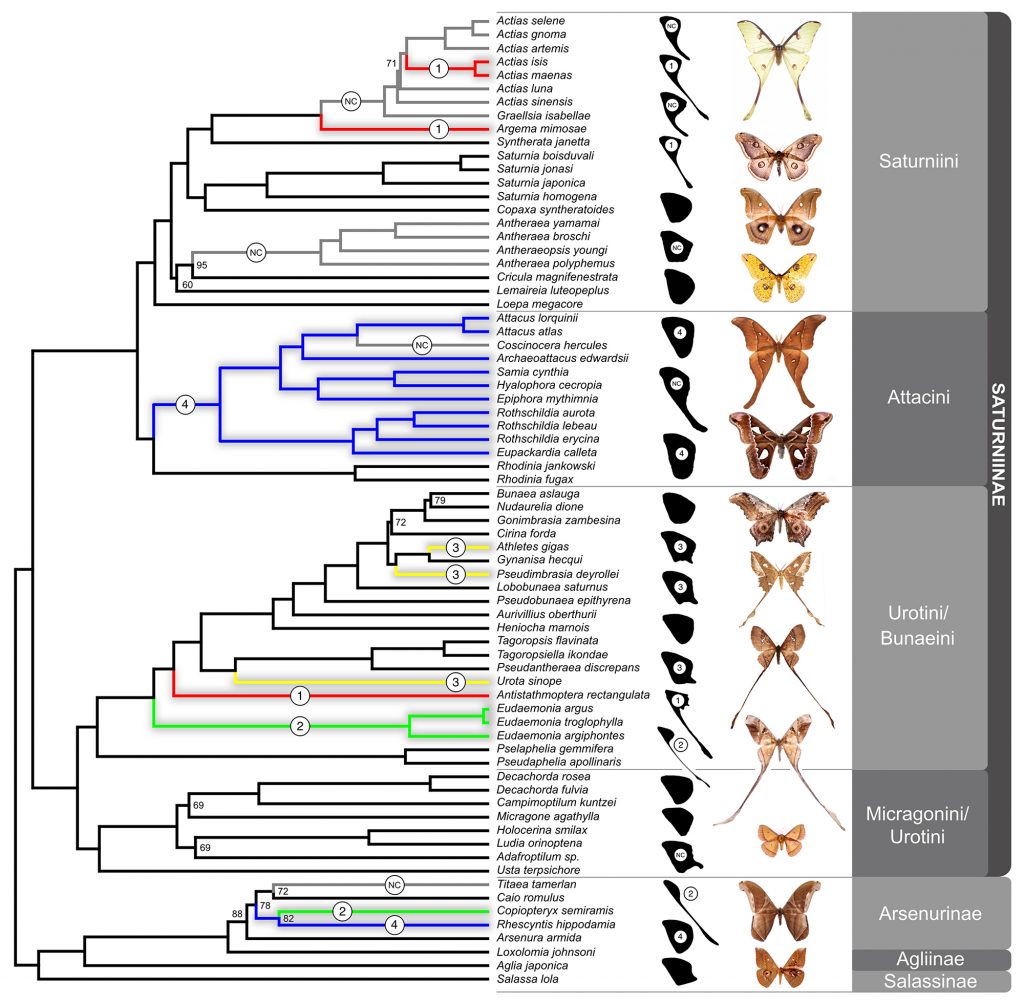 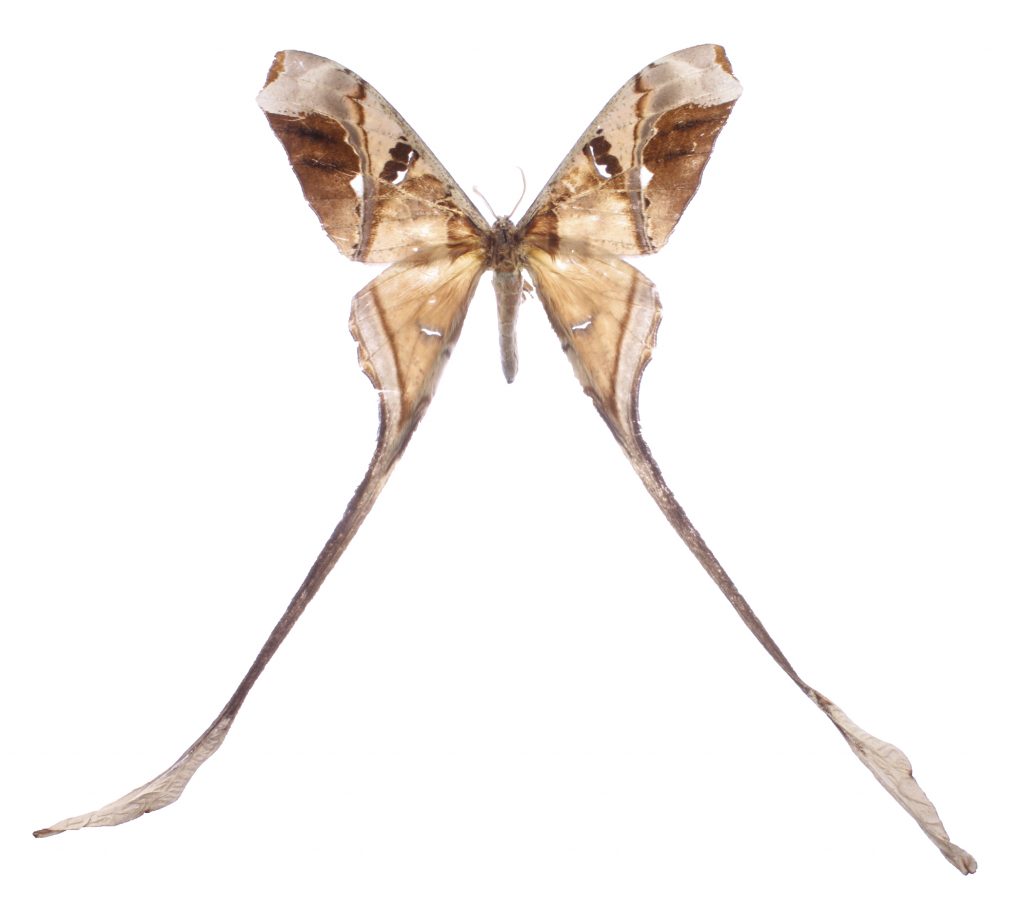 This Copiopteryx semiramis, a moth species native to Mexico, Latin America and South America, has extra-long tails. Tails like these can create a misleading echoic target for a bat on the hunt. 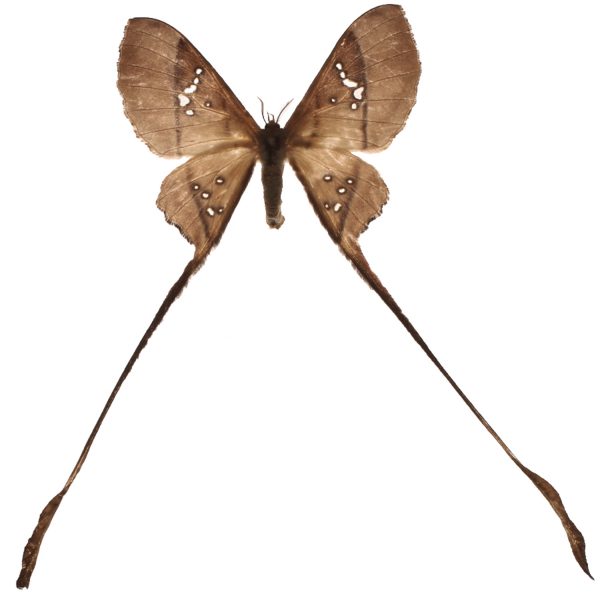 The long tails of Eudaemonia argiphontes, an African moth, resemble those in Copiopteryx semiramis, but the two species are not closely related. Such similar features show the power of bats to drive the evolution of moth shape. 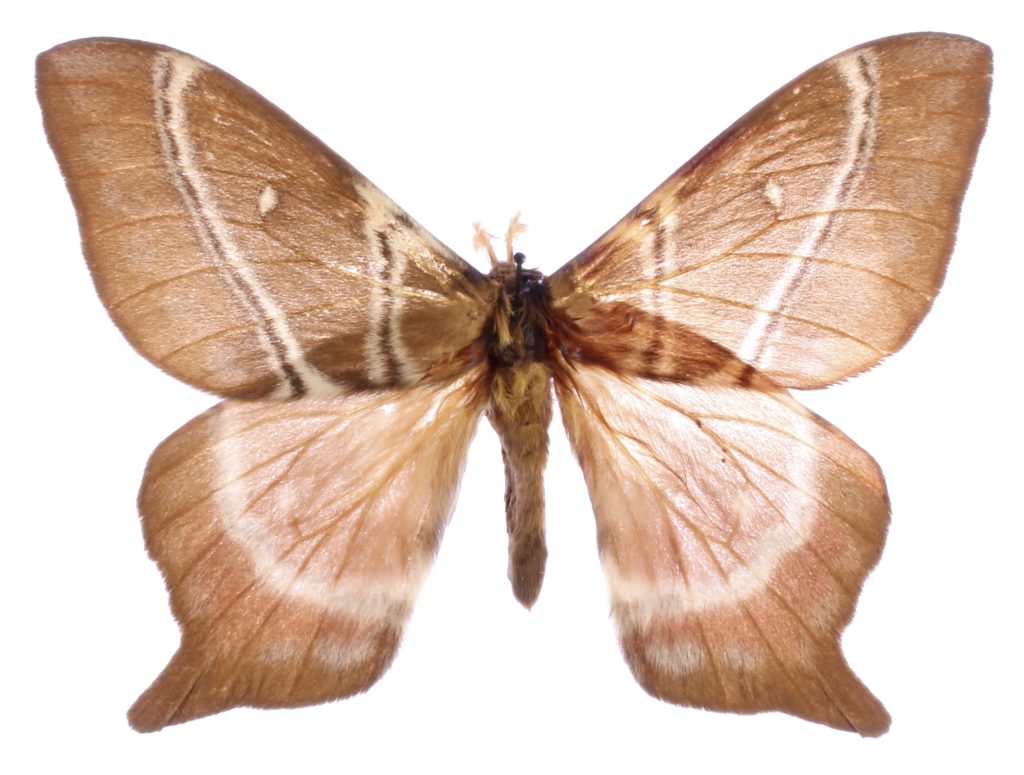 Some silk moths, like this Urota sinope, have evolved short tails as an anti-bat defense. 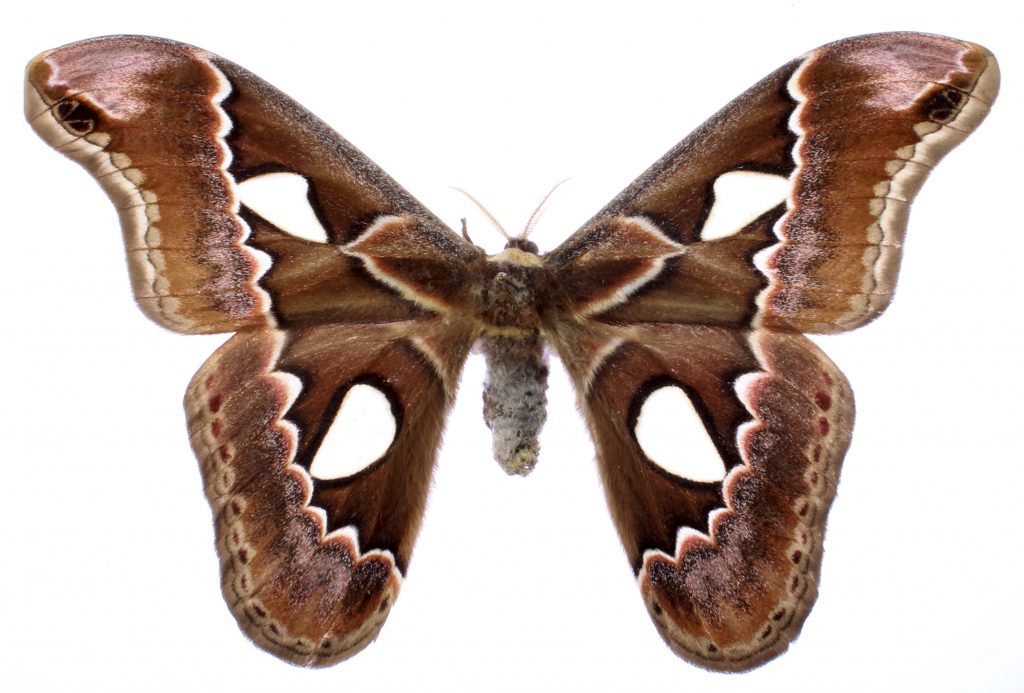 Large lobed hindwings, like those of this Rothschildia erycina, are another anti-bat defense strategy developed by certain silk moth species.

These shapes have appeared multiple times in silk moths globally, and nearly identical shapes often showed up in moths that were not close relatives.

“We see moths moving toward peaks of optimal shapes with unrelated moths evolving in similar ways,” Kawahara said. “This speaks to bats’ selective pressure on their prey.”

After identifying these major hindwing shapes, the team test-drove them against the judges best qualified to rate their efficacy: real bats.

After modifying the hindwings of three types of silk moths – polyphemus moths, luna moths and African moon moths – to match these shapes, researchers in study co-author Jesse Barber’s lab at Boise State pit them against big brown bats in a flight room with high-speed cameras and ultrasonic microphones. 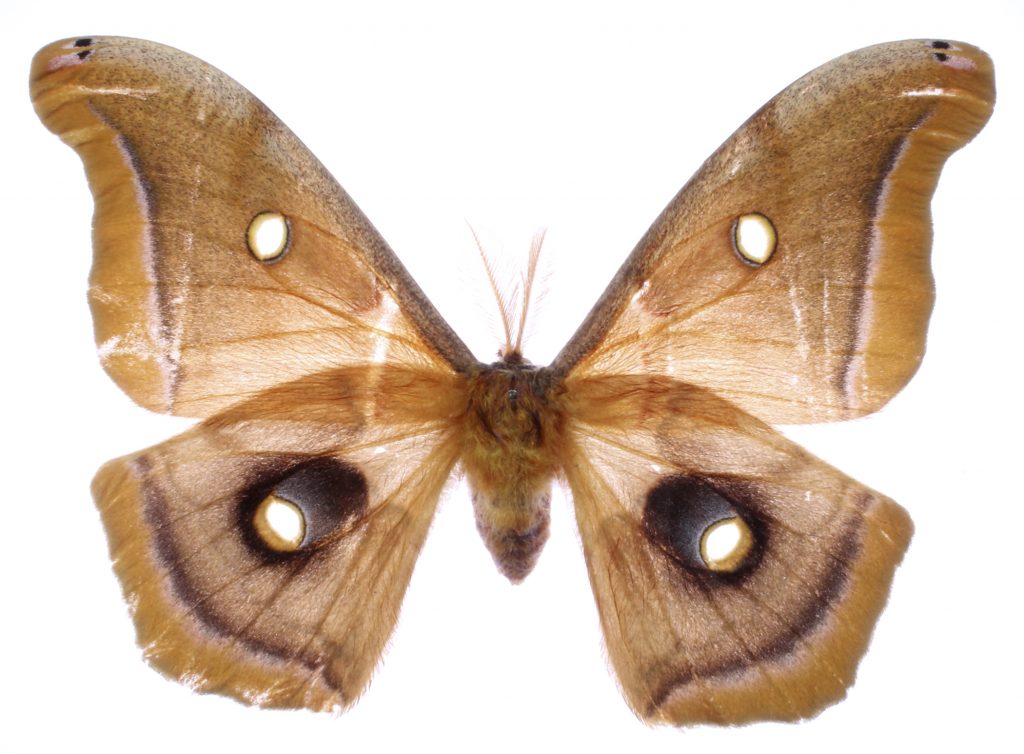 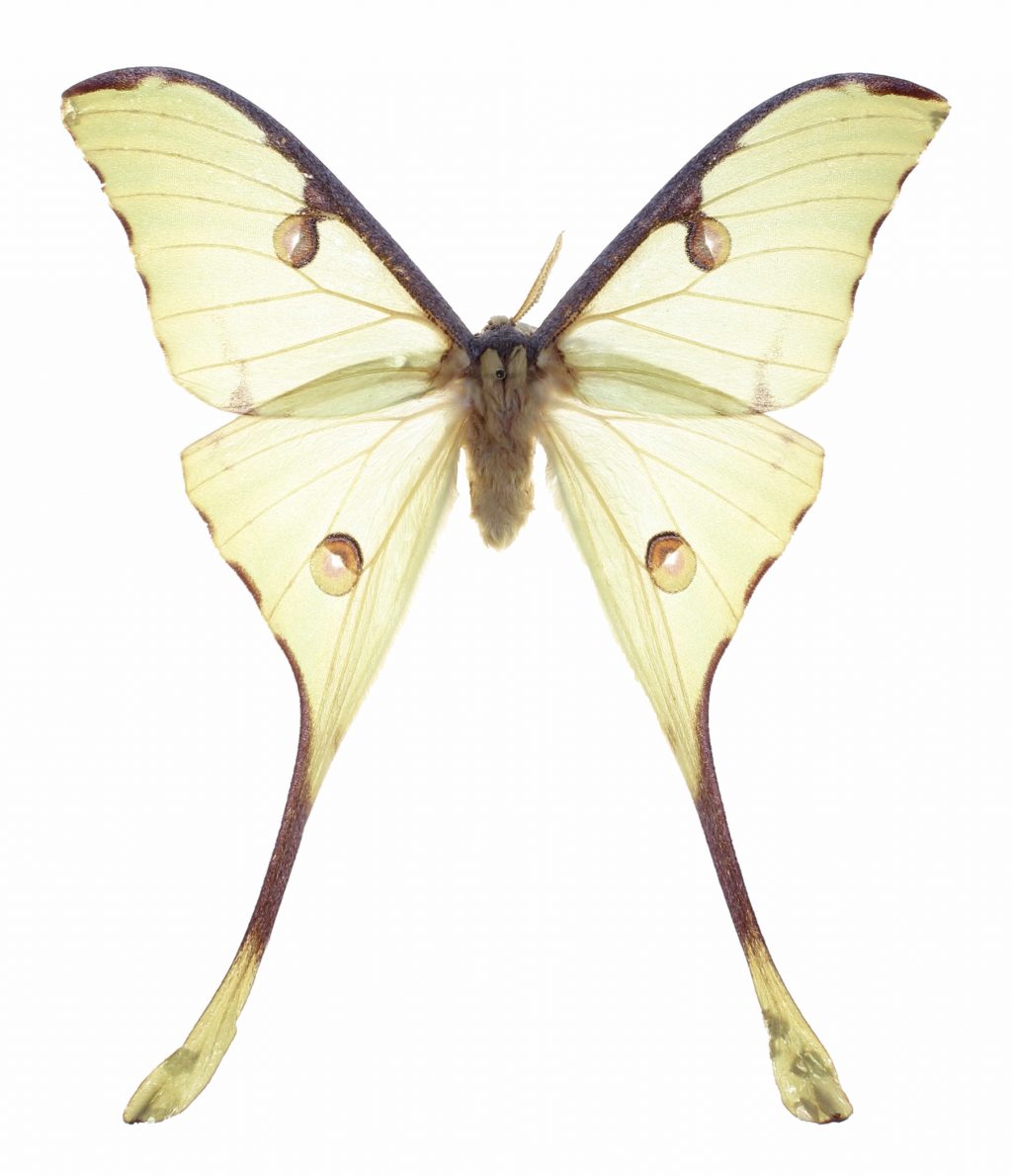 The exceptionally long tails of the African moon moth, Argema mimosae, provide excellent defense against bats. With unaltered tails, these moths escaped bats more than 70 percent of the time, but this rate dropped dramatically when their tails were shortened or removed. 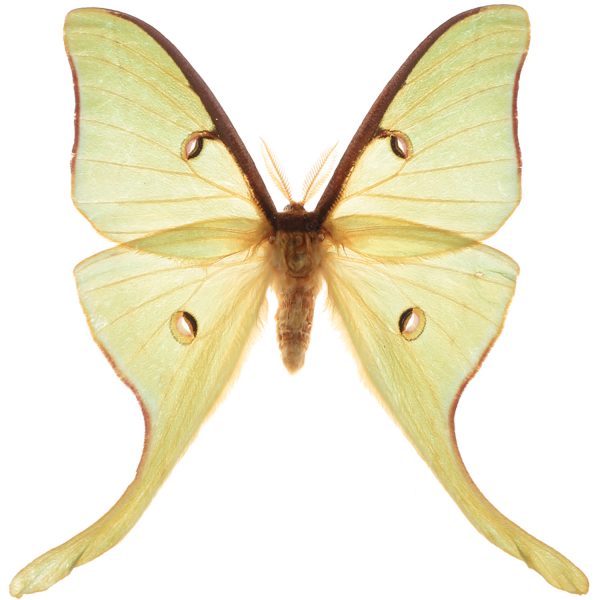 Many silk moths, including the luna moth, Actias luna, a familiar North American species, fly erratically when bats are near, another defense tactic. Making their flight patterns less predictable makes it more difficult for an attacking bat to catch the moths.

Silk moths might be delicately built, but stacked against bats, they are hardly sitting ducks. With wingspans of more than 5 inches, their large size puts pressure on their predators to aim well. Bats and moths also have impressive flight capabilities, said Juliette Rubin, the study’s lead author.

“Bats are incredibly acrobatic and very skilled hunters, but moths are also powerful flyers and have an incredible turn radius,” said Rubin, who completed the research as a Boise State master’s student. “They seem to be pretty well-matched adversaries.”

Unaltered polyphemus moths escaped bats only 27 percent of the time in the flight room. But enlarging their lobed hindwings to match the size of two different tribes of silk moths upped their escape rate to 56 percent.

African moon moths, which have long tails, performed much better with their tails than without. Unaltered moon moths evaded bats 73 percent of the time, but this dropped to 45 percent with shorter tails and 34 percent with none. Luna moths, another tailed species, followed a similar trend. 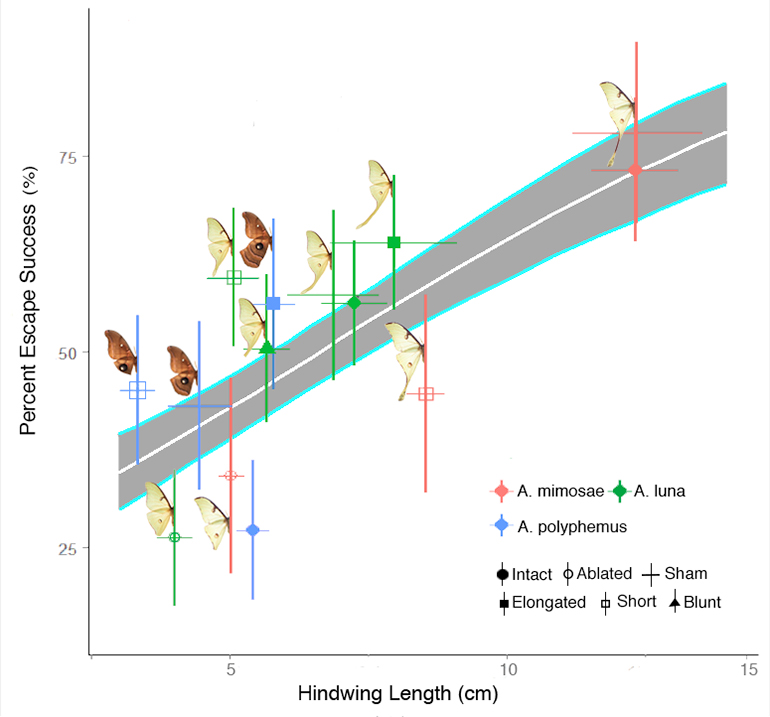 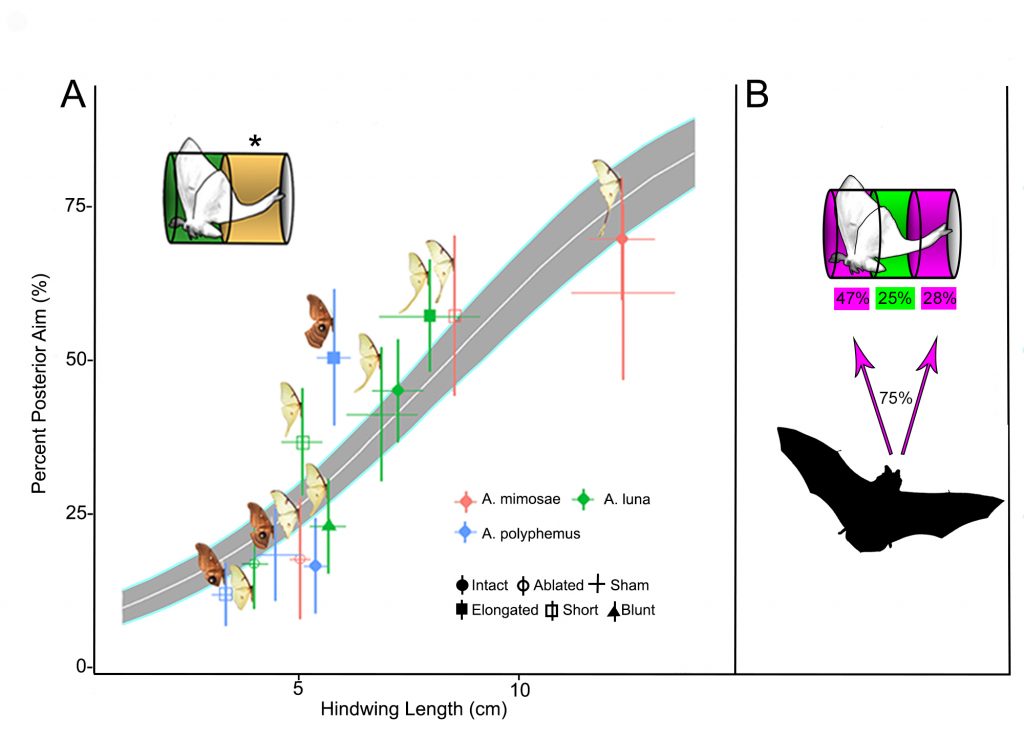 Bats direct an increasing proportion of their attacks toward the back half of the moth as hindwing length increases. This part of the moth is a poor target compared with the moth’s body core. Numbers above the cylinder image show the average capture success when bats aim at each segment of the moth.

Bats only eat a moth’s body, not its wings, and they need to attack its core to be certain of success. Long tails are likely creating the illusion of multiple targets, confusing bats and tricking them into striking at tails, Rubin said. Because moth flight depends on their forewings, a rear attack often enables them to skirt away safely, even if they lose part of their hindwings in the process.

Rubin said a bat’s typical attack behavior can include closing its wings around a moth or extending a wing to scoop a moth into its mouth. But when trying to strike moths with longer tails, “they’d reach out for the tail ends, and the moths would escape almost every time.”

The power of these sensory illusions as evolutionary drivers is often underappreciated, she said.

“Prey might evolve in ways that exploit weaknesses in the armor of their predators’ perception,” Rubin said. “We think this is happening across different systems, not just in moths.”

Could bats figure out a way to bypass silk moths’ defense tactic? Rubin is skeptical. Even after facing the same types of hindwing shapes for months, bats did not improve their ability to discern a juicy moth body from a useless decoy.

“If these tail traits are altering or manipulating the information bats are receiving as they try to assess where the moth is and where to attack, that could be a hard strategy for bats to get around,” she said.

Other co-authors include Chris McClure from Boise State and the Peregrine Fund and Brad Chadwell from the Idaho College of Osteopathic Medicine.

The National Science Foundation, the National Geographic Society and Sigma Xi provided funding for the research, with postdoctoral support from the Florida Museum and graduate research support from Boise State University.