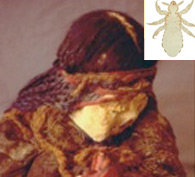 Along with a long list of collaborators we have been able to sequence a small stretch of DNA from lice that are over 1,000 years old! These lice came from two well-preserved mummies from Peru, and they have the potential to tell us much about the peopling of the Americas. We are now seeking additional lice from New World mummies to continue this research. The first manuscript based on the ancient DNA sequence data appeared online in Journal of Infectious Diseases. 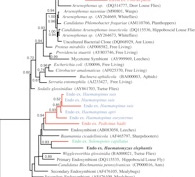 We have recently been funded to study the shared coevolutionary history of mammals, their ectoparastic sucking lice, and endosymbiotic bacteria that live within the lice. It was previously thought that lice were able to radiate with their mammalian hosts due to the acquisition of an obligate endosymbiotic bacterium that allowed them to feed solely on mammalian blood (endosymbionts are required for obligate blood feeding). Sucking lice are found only on placental mammals, and they appear to have radiated roughly 65-80 million years ago (like placental mammals), so this previous hypothesis made a lot of sense. Shortly after the lice got a new endosymbiont, they radiated to fill a vacant niche alongside mammals. However, preliminary data show that the lice have acquired endosymbionts several times throughout their history, which begs the question “how often have these insects acquired obligate endosymbionts and where did they get them?” This project is ongoing and combines the interests of myself, Jessica Light (postdoc) and Julie Allen (Ph.D. student), and the project includes co-PIs and collaborators (Lance Durden, Vince Smith, Henk Braig, and Takema Fukatsu). 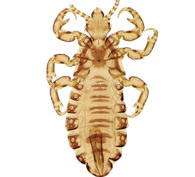 Well, if you haven’t heard yet, the human body louse genome has been sequenced and annotation is underway. You can keep up with the progress on the VectorBase web site. The data in the genome show that the body louse has a very compact genome, which is intriguing for many reasons. We are currently using the polymorphisms in the genome to find SNP-STRs and microsats that can be used for population level studies relating to human/louse co-demography studies. In the process of sequencing the human body louse genome, technicians were also able to sequence the whole genome of the endosymbiont as well. For our human/louse/endosymbiont work we now have full genomes for all three associates! This opens up amazing new avenues of research.

Rates of evolution in endosymbionts 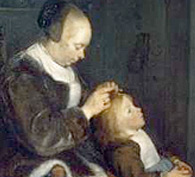 Along with Dr. Braig’s lab we are studying the elevated rates of nucleotide substitution in lice and their endosymbiotic bacteria. Lice are known to have faster rates of nucleotide substitutions than their vertebrate hosts (generally 3-5 times faster), and Nancy Moran and her colleagues have shown elevated rates of substitution in endosymbiotic bacteria. Does that mean that louse endosymbionts should be incredibly fast evolving? You’ll have to wait to hear the answer, which is a manuscript in preparation. 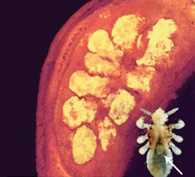 Several recent and forthcoming manuscripts have resulted from a collaboration between my lab and that of Dr. Henk Braig in Wales. Julie Allen (Grad student, Reed Lab) traveled to Dr. Braig’s lab to take early DNA sequence data and create oligonucleotide probes that allowed us to determine that our DNA sequences were indeed from the mycetome-bound bacteria that were originally seen over 300 years ago. These endosymbionts reside in several distinctly different chambers (mycetomes) throughout the life of the louse, and the bacteria undergo two extracellular migrations. You can read about this work in our paper in the journal FASEB.

A continuation of our work with Dr. Braig (see above) allowed us to sequence the 16SrRNA gene from human head lice, human body lice, chimpanzee lice, and human crab lice to confirm that these endosymbionts represent a monophyletic lineage of gamma proteobacteria. This work was published in Applied and Environmental Microbiology.

How humans got pubic lice 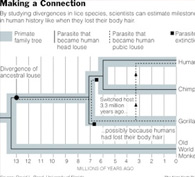 Yes, you read the title correctly. Humans have two genera of lice (Pthirus, the pubic louse, and Pediculus the head or clothing louse). Chimps have a species of Pediculus (P. schaeffi) and gorillas have a species of Pthirus (P. gorillae), yet we have one of each (Pediculus humanus and Pthirus pubis). These lice are highly host specific, which begs the question “why do we have both?” It turns out that we have had Pediculus humanus throughout our history, and it diverged from the chimp louse species around 5.5 million years ago (just like the hosts did). The two Pthirus species on the other hand, diverged only 3.3 million years ago, which based on cophylogenetic analyses, means that we got our pubic lice from gorillas in a host switch. You can read more about this in our paper in BMC Biology (open access publication). See write-ups in the NY Times and The Loom. You can get the sequences from Genbank.

The head lice that parasitize living humans show much greater genetic diversity than do their human hosts. The three lineages of mitochondrial DNA found among head lice last shared a common ancestor over two million years ago, whereas the mitochondrial DNA of their human hosts coalesce much more recently (~150,000 years ago). We postulated in our 2004 PLoS paper that one of the louse lineages may have originated on an archaic species of human only to jump onto modern humans relatively recently.