Hurricane Dorian and its serious effect on the Bahamas has given many of our scientists and staff cause to reflect on our island neighbors. Not only is our state closely related by geography, history and culture, Florida Museum and Bahamian scientists also have shared a great deal of research.

On Abaco and Grand Bahama, the decades-long relationships between the Florida Museum and Bahamian colleagues, students, teachers, volunteers and communities have been and continue to be the foundation of an ongoing, shared commitment to the exploration, documentation and conservation of the rich natural history, cultural heritage and biodiversity of the islands.

Our faculty and staff recently wrote in support of the islands:

Florida Museum Statement of Support for Abaco and Grand Bahama 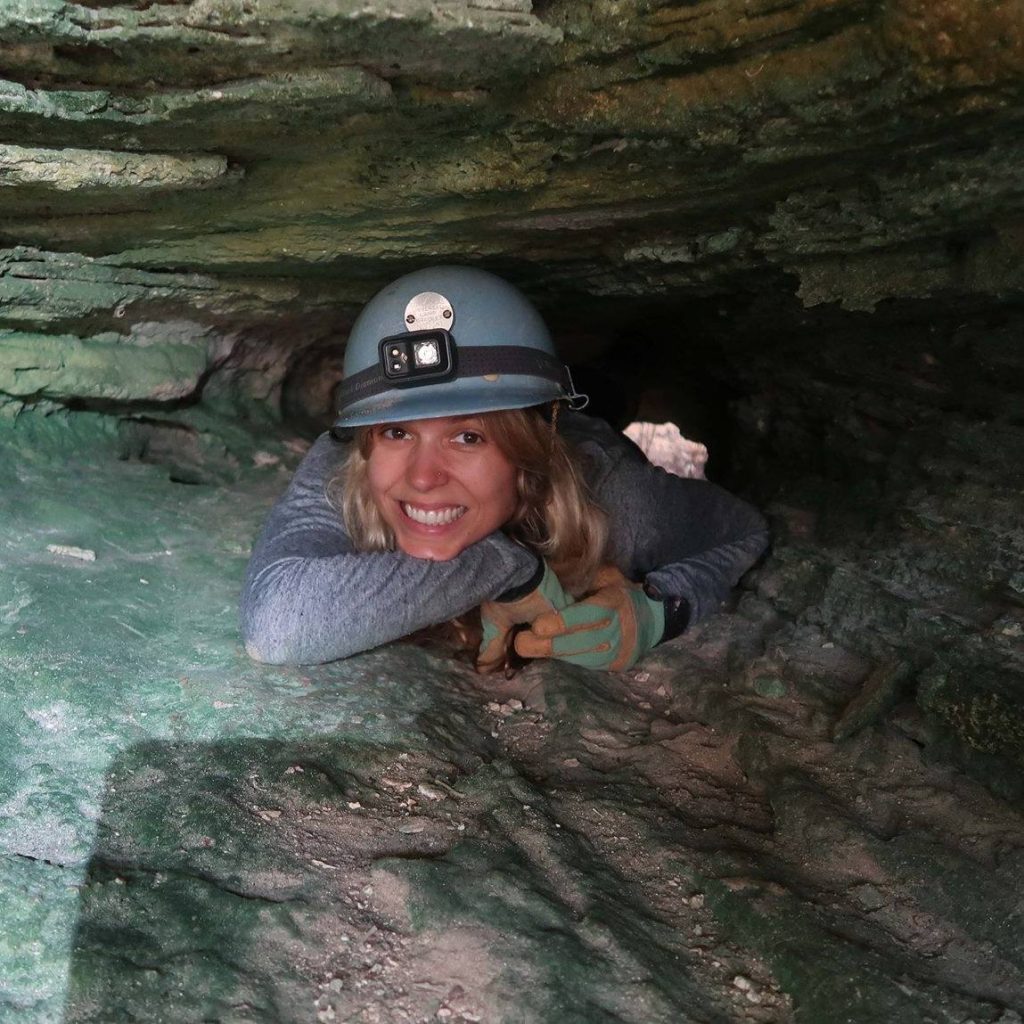 Postdoctoral researcher Jessica Oswald digs for fossils in a cave on Long Island in the Bahamas. Photo courtesy of Nancy Albury 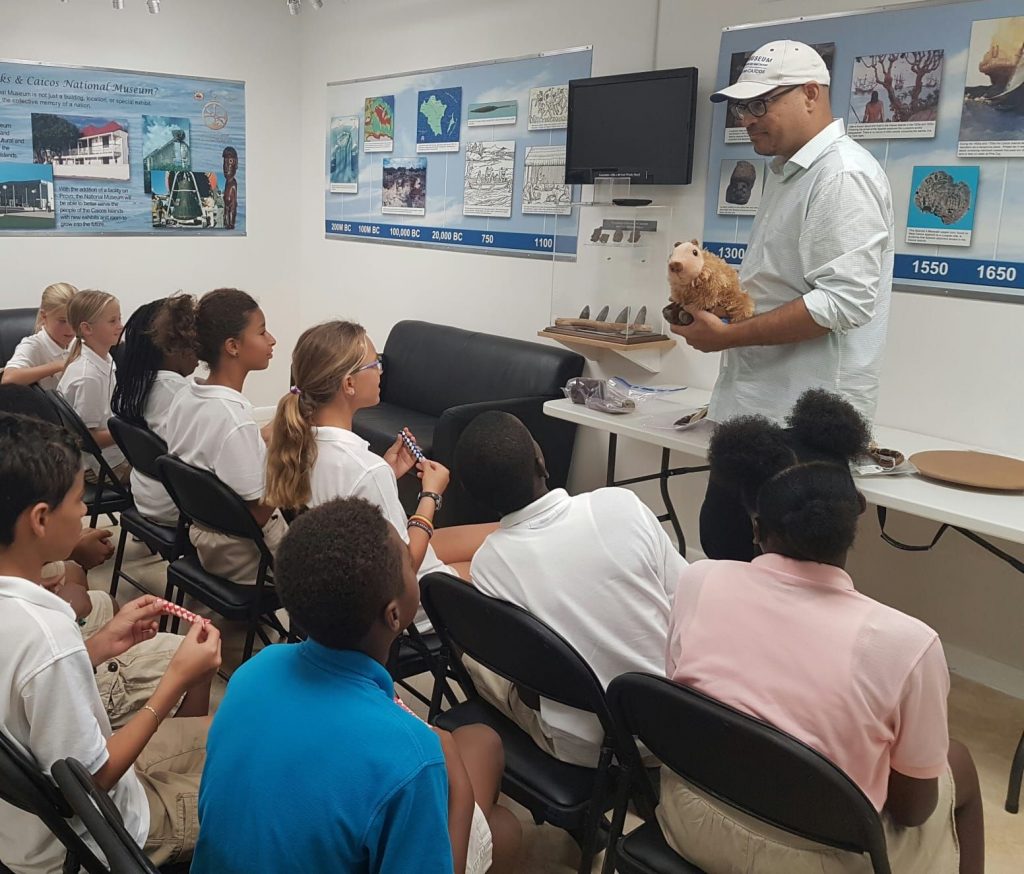 Michael Pateman unpacks a box with Bahamian schoolchildren. One of the students’ favorite items is a stuffed capybara, an animal that looks identical to the hutia. Hutias, once native rodents to the islands, are now extinct. Photo courtesy of Michael Pateman 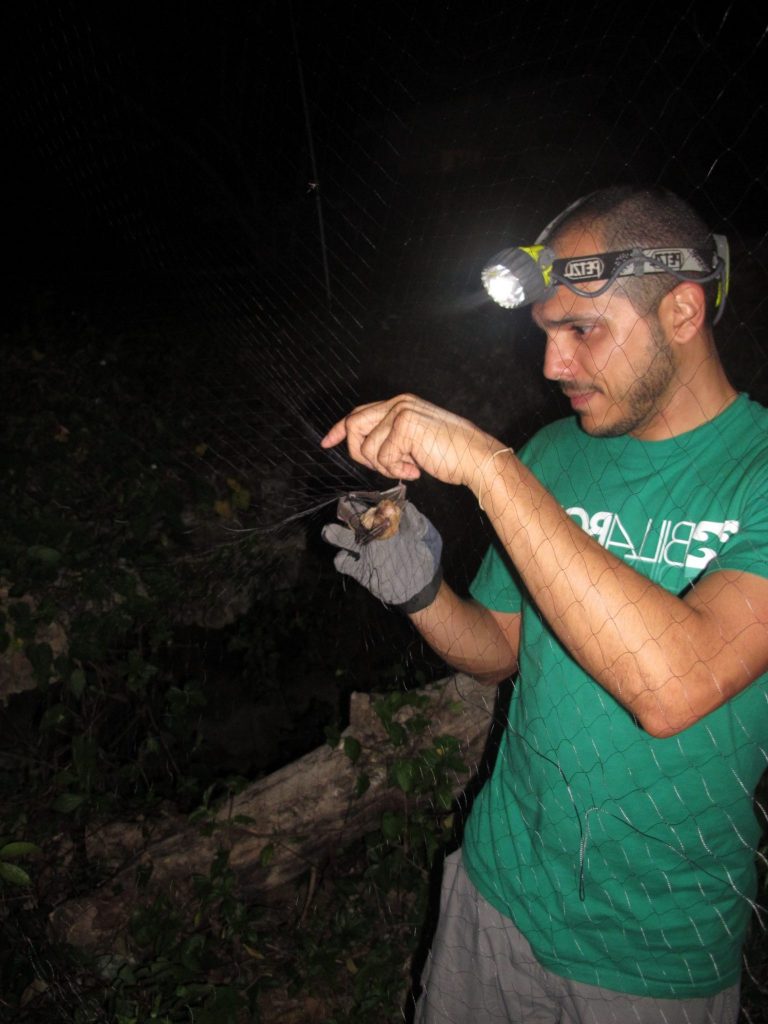 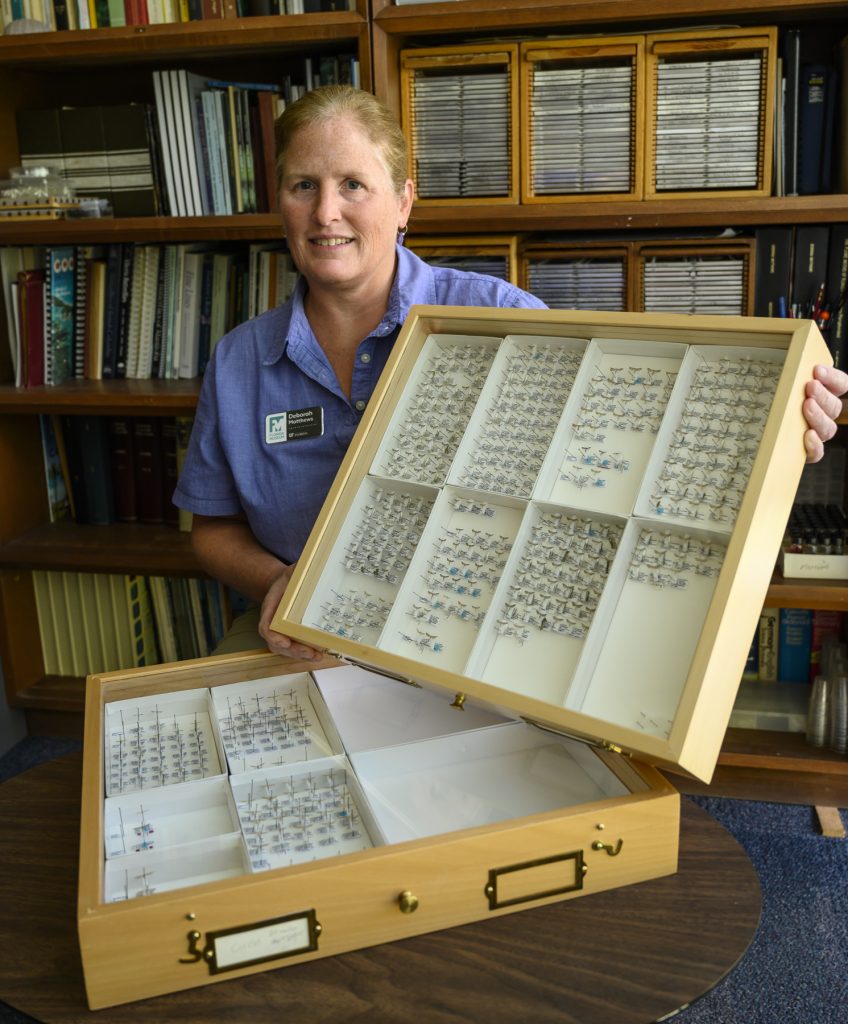 Deborah Matthews displays Bahamas plume moth specimens from the Florida Museum’s collection. With the exception of four moths deposited in other collections, these two drawers contain the only museum specimens of these moths in the world. Florida Museum photo by Jeff Gage 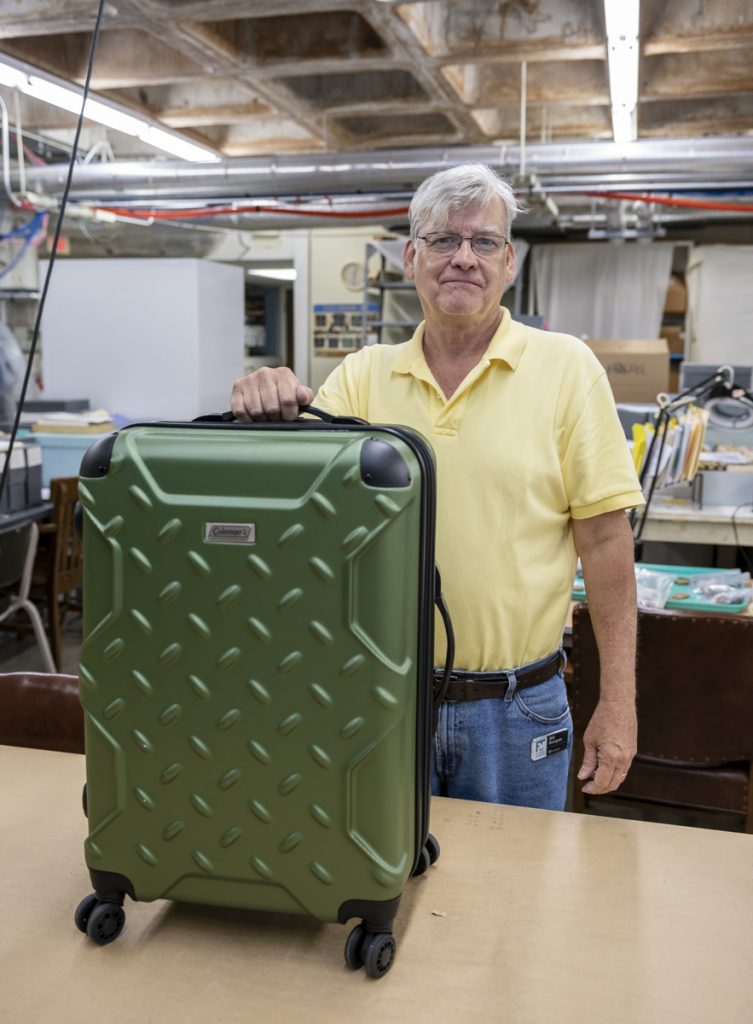 William Keegan, curator of Caribbean archaeology at the Florida Museum of Natural History, assembles suitcases filled with artifacts that bring the Lucayan people to life for middle school and high school students in the Bahamas. Florida Museum photo by Kristen Grace 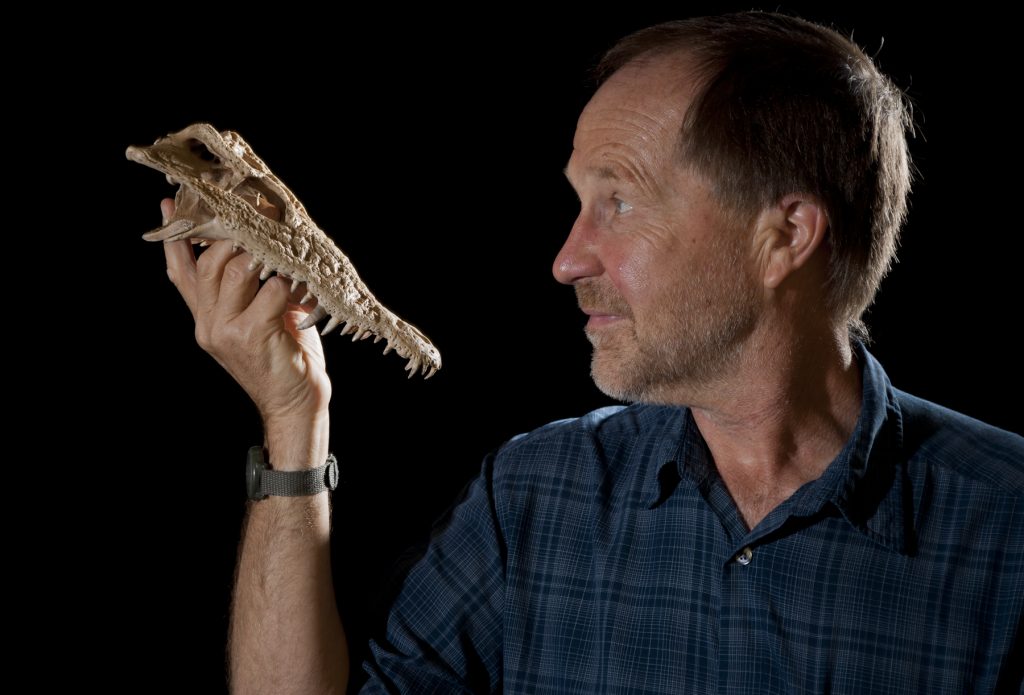 Co-authored by Florida Museum of Natural History ornithology curator David Steadman, a new study reconstructs the ancient food web of the Bahamian island of Abaco where mega-reptiles, including the Cuban Crocodile, once flourished. Florida Museum photo by Kirsten Grace

Packing a suitcase for the future
November 27, 2018

Fossils from Bahamian Blue Hole may give clues to early life
May 1, 2008

To share our research and relationship with the Bahamas, we created some #BahamasStrong Stories for social media:

University of Florida and Florida Museum scientists and students have been doing research in the Bahamas for decades. This tiny fossil bat mandible in clear capsule was collected there in 1958 by J.C. Dickinson & Walter Auffenberg, two of our well-known scientists. 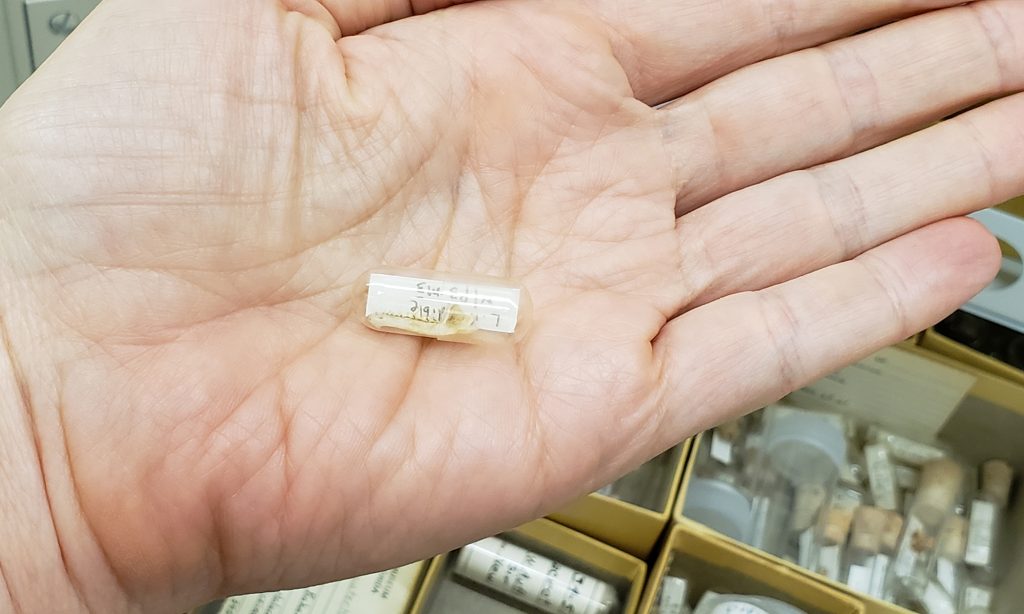 This tiny fossil is one of many collected in the Bahamas in the ’50s by prominent Florida Museum scientists. Museum collections help document biodiversity across space and time. Florida Museum photo by Radha Krueger 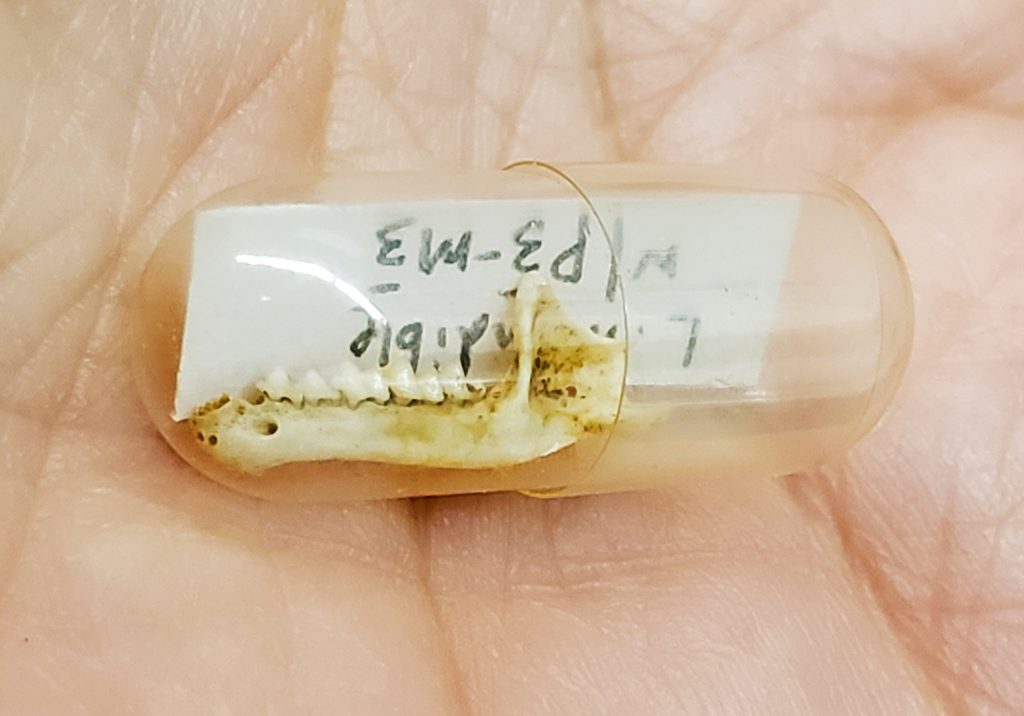 This tiny fossil is from a Waterhouse’s Leaf-nose Bat, Macrotus waterhousii. This species of bats is still very common in the Bahamas. Florida Museum photo by Radha Krueger

There are 11 species of bats currently living in the Bahamas. The Bahamian Funnel-eared Bat, Chilonatalus tumidifrons, lives only on a few islands in the Bahamas. It is considered near threatened, and is vulnerable to human impact, climate change & severe weather.
More about this tiny bat on the IUCN Red List 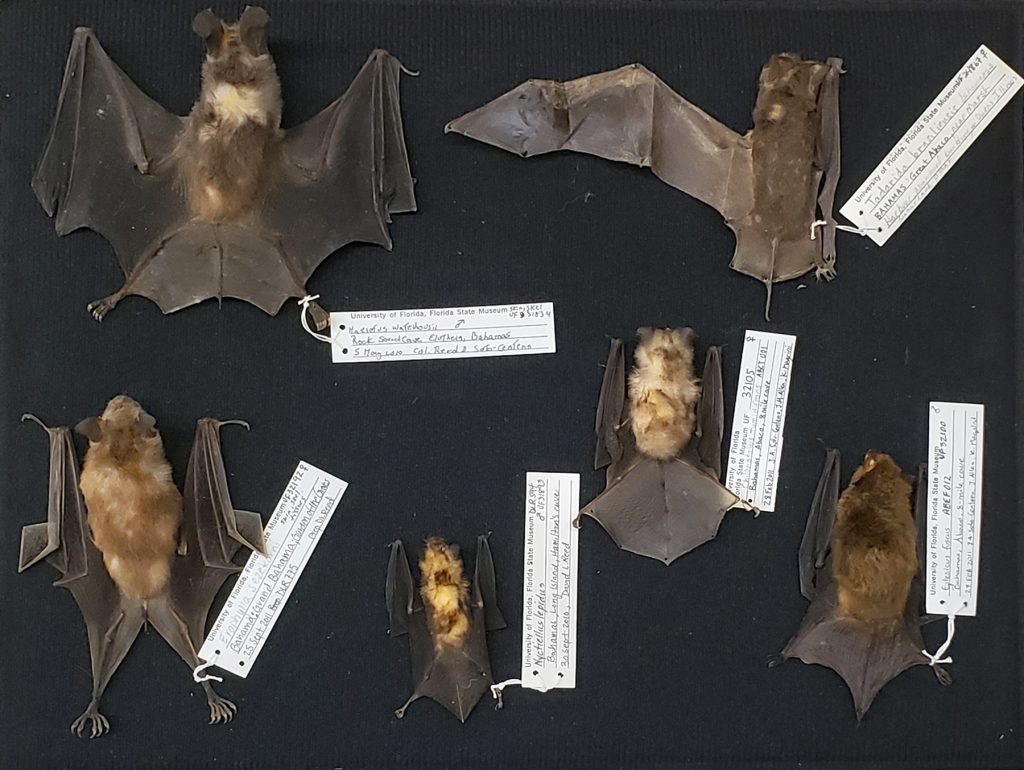 There are eleven species of bats that live in the Bahamas. Of these, two live only in the Caribbean, and one lives only in a few locations in the Bahamas. Florida Museum photo by Radha Krueger 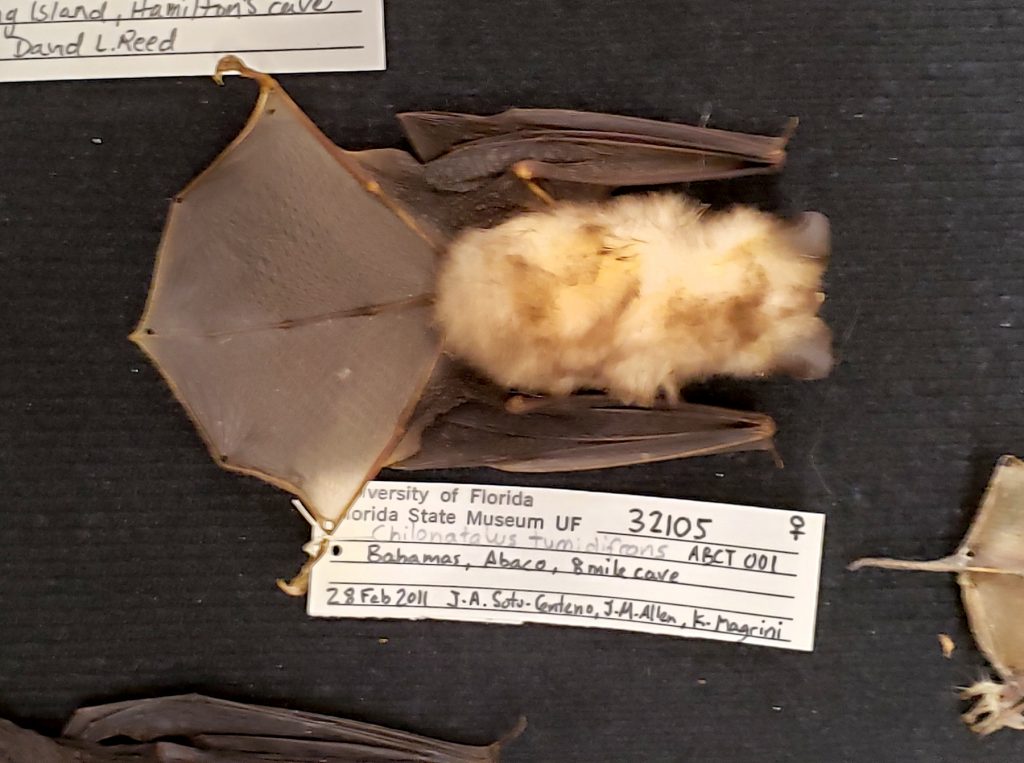 The Bahamian Funnel-eared Bat, Chilonatalus tumidifrons, lives only on a few islands in the Bahamas. Florida Museum photo by Radha Krueger

Because they can fly, bats are good models for studying mammal movement in fragmented habitats. This video looks back at our then-UF grad student Kelly Speer, our scientist David Reed and team doing bat research in the Bahamas in 2013:
Bat Dispersal in the Bahamas (Watch) 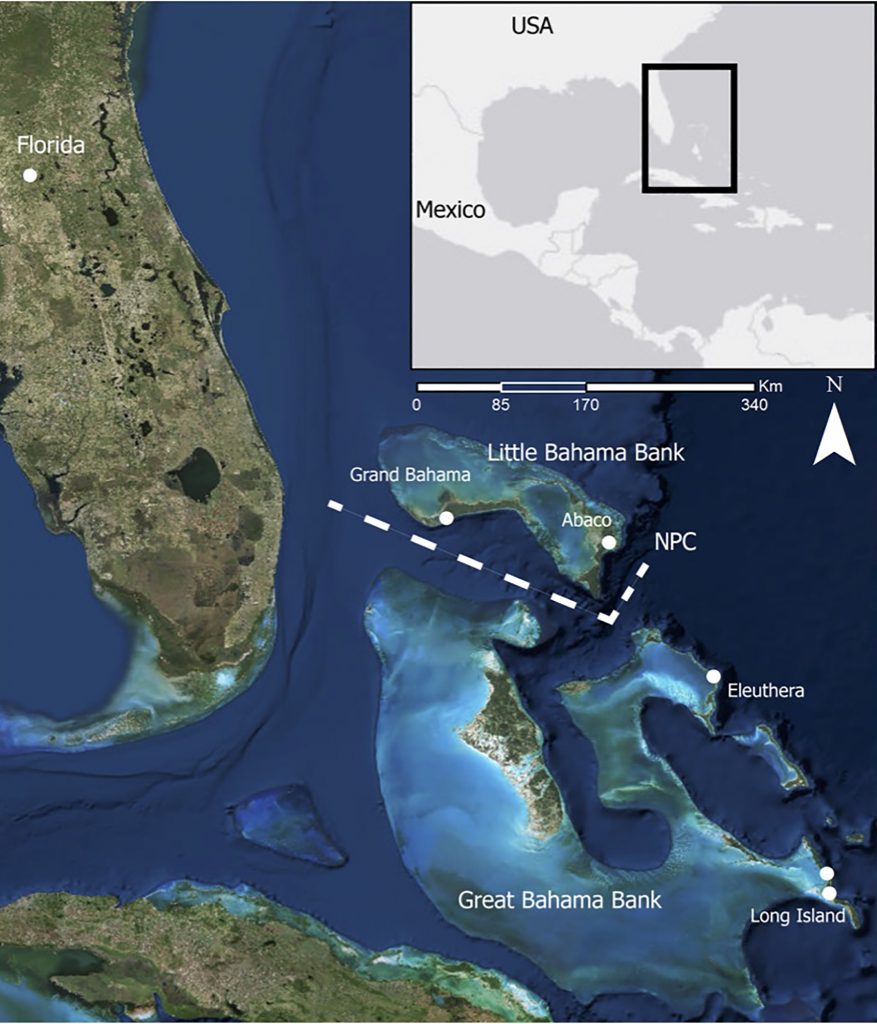 The dashed line marks the Northwest and Northeast Providence Channels, which divide populations of free-tailed bats that last shared an ancestor hundreds of thousands of years ago. Bats were collected from locations marked with white dots. Figure by Speer et al. in Ecology and Evolution 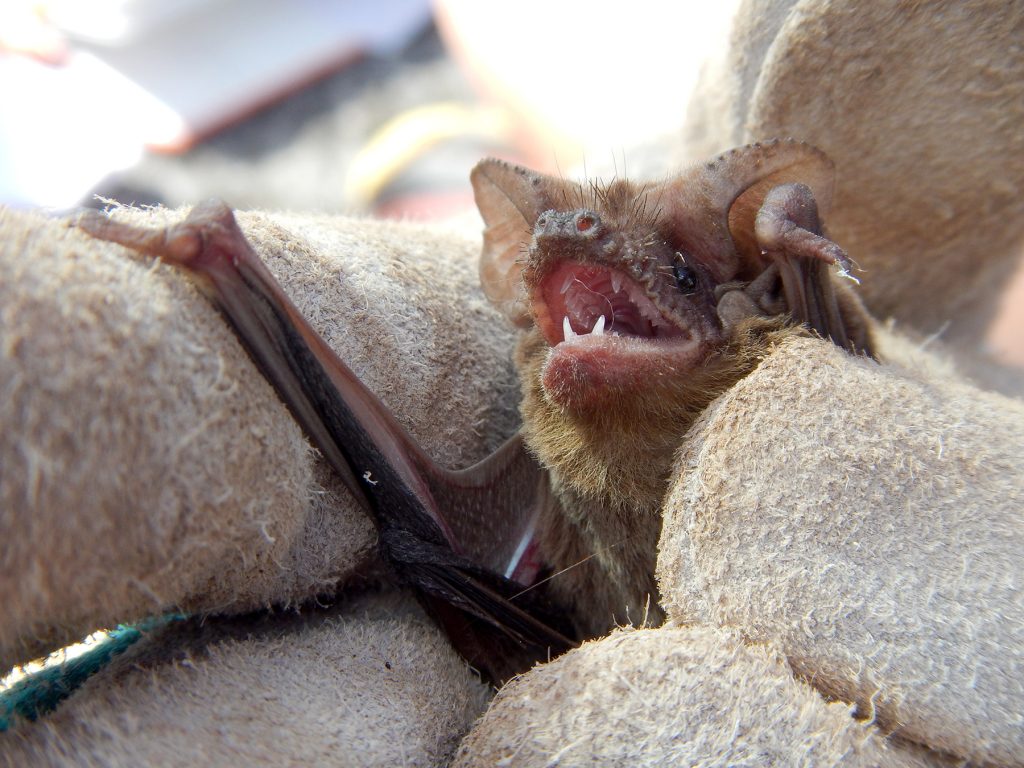 Brazilian free-tailed bats can likely see across the narrow ocean channel that divides northern and southern Bahamian islands but do not cross it. Photo courtesy of Nancy Albury

It may be some time before our professional work in the Bahamas can resume. But as relief work evolves, we will be extending support to the island community. 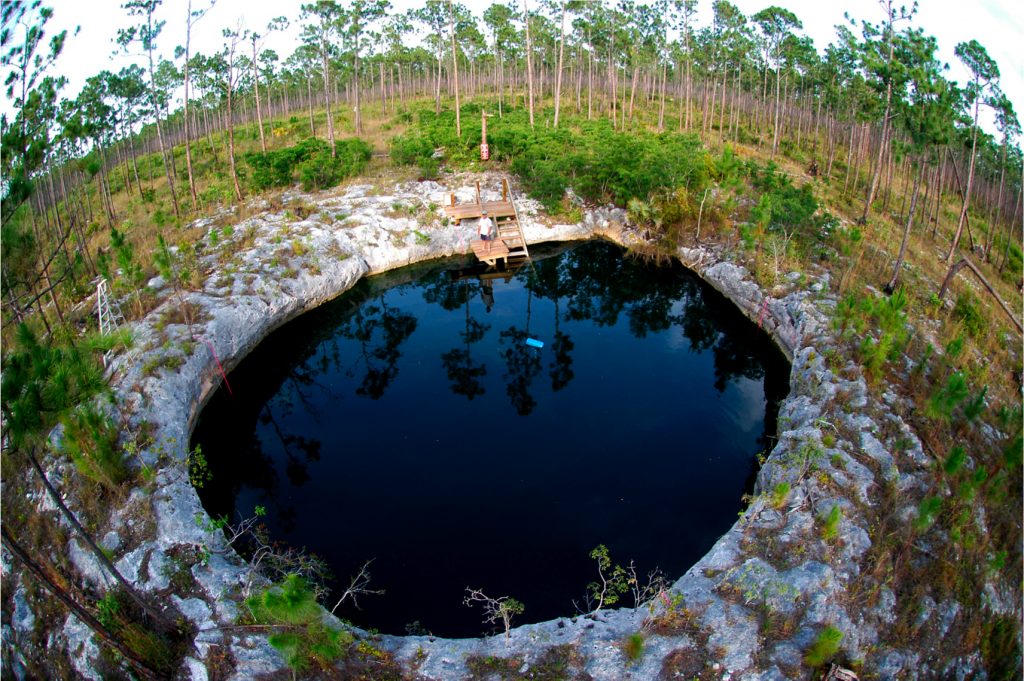 This photo shows an overhead view of the sinkhole where scientists and divers recovered fossils including crocodiles, tortoises, snakes, birds and bats. Photo courtesy of Curt Bowen, Advanced Diver Magazine 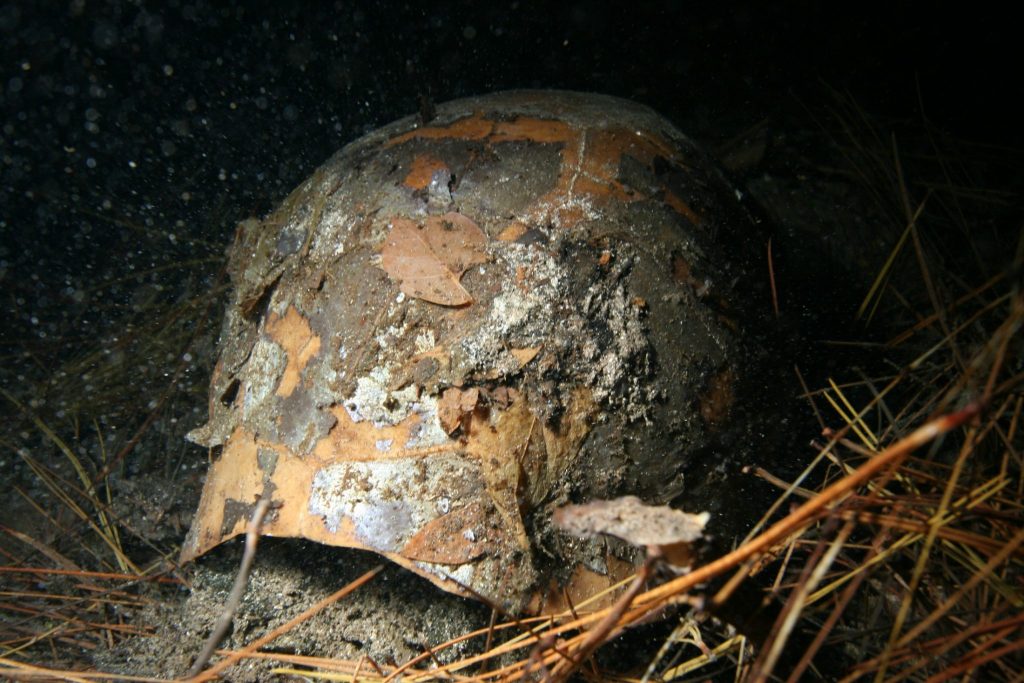 The extinct tortoise fossil shown here was discovered by divers about 75 feet below the surface of Sawmill Sink in the Bahamas. Photo courtesy of Nancy Albury 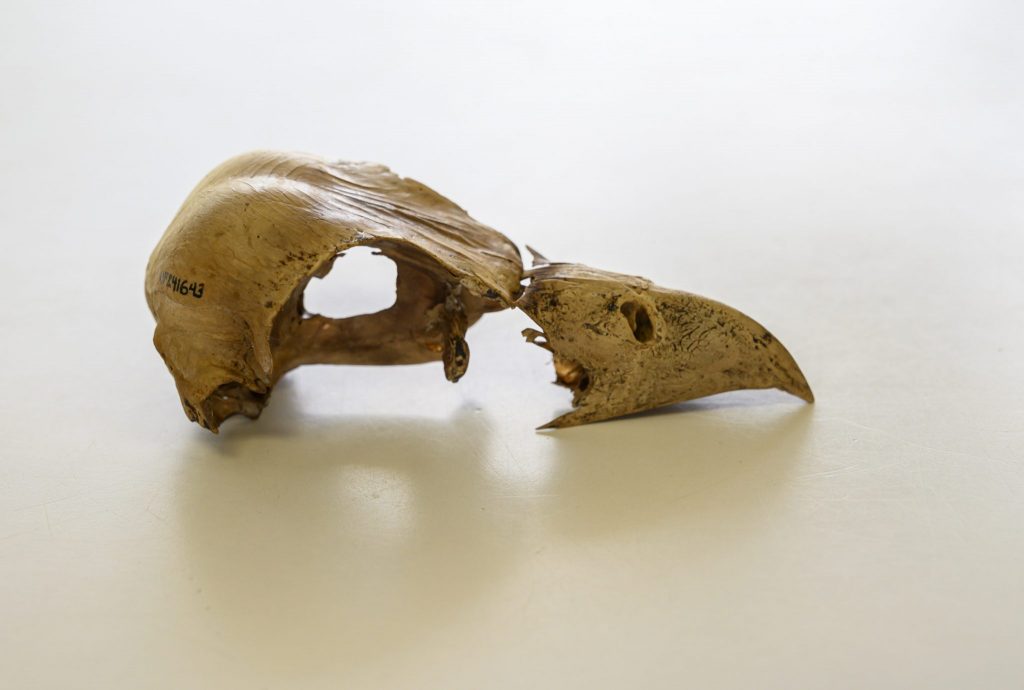 Caracara creightoni, a Caribbean bird driven to extinction by the arrival of humans, was about the size of modern caracaras but had a bigger bill and stronger bite. Florida Museum photo by Kristen Grace

“On islands like Abaco that have always been dominated by reptiles, the flora and fauna are more vulnerable because they have evolved to lead a more laid back, island existence,” Steadman said of Abaco’s largest carnivore & herbivore disappearing.
Full story: Answer to restoring lost island biodiversity found in fossils

For years, Brian Kakuk & scientists campaigned for protection of these blue holes. Kakuk: “From a scientific standpoint, we have basically been here since the splitting of Pangea, so the Bahamas are a great way to see how things have changed over time.”
Full story: Protecting a sunken ancient world

Museum collections are valuable yet vulnerable. Blue hole specimens were stored both in the Bahamas & here at the Florida Museum. Scientists also left specimens in the sinkhole, so there are likely more discoveries to be made some day. 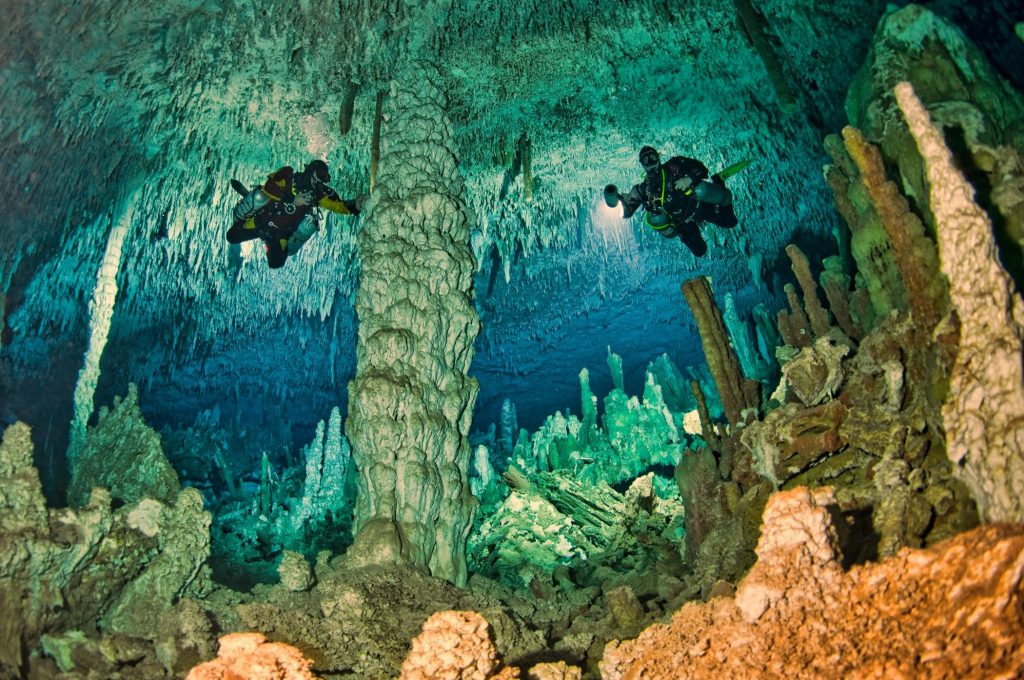 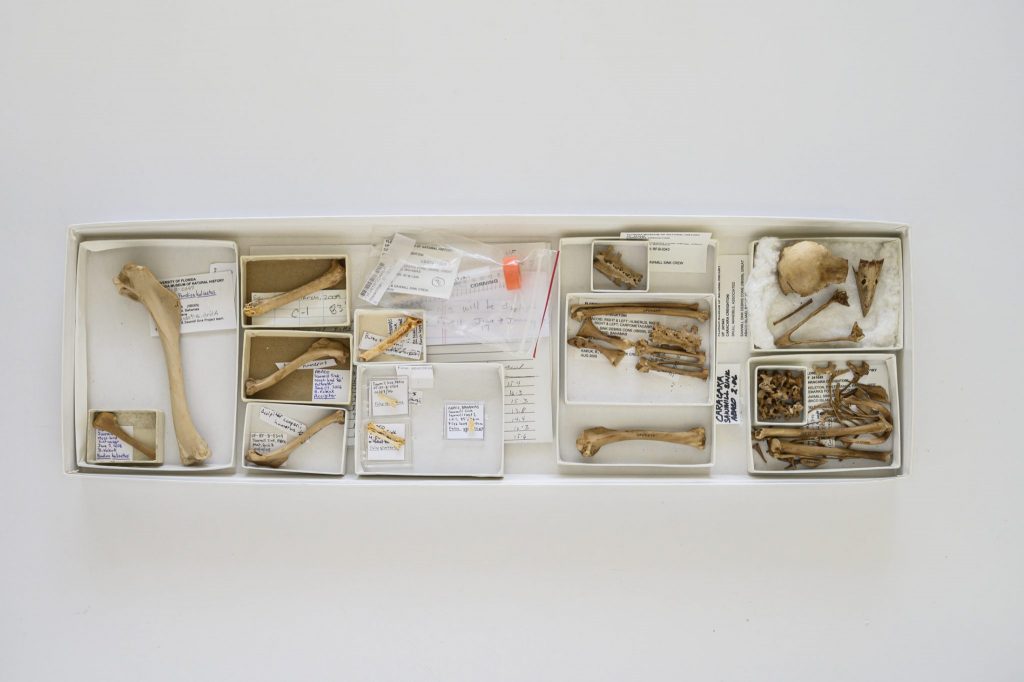 In the spirit of friendship, collegial support and human resiliency, the Florida Museum stands in solidarity with the people of Abaco and Grand Bahama during their time of recovery, healing and rebuilding.

The people of the Bahamas can use a tremendous amount of support right now, and rebuilding will require a lot of funding. While many local organizations are arranging donated supplies to be delivered to the islands now, monetary donations will be critical to long-term recovery.

How To Help Hurricane Dorian Recovery In Bahamas

*The Florida Museum does not endorse these relief organizations. Please research before donating.