Introducing Bahamian schoolkids to native people of the past

As University of Florida archaeologist Bill Keegan studies the ancient Lucayan people, inhabitants of the Caribbean for hundreds of years, he must rewrite the textbook on life in the Bahamas before Columbus.

And then, he packs what he knows in a suitcase.

Keegan, curator of Caribbean archaeology at the Florida Museum of Natural History, assembles suitcases filled with artifacts that bring the Lucayan people to life for middle school and high school students in the Bahamas. He is helped by Michael Pateman, director of the Turks and Caicos National Museum, and the memorial fund of archaeological volunteer James B. Rowan II.

While these suitcases make their way around the islands as mobile exhibits, Keegan gives workshops to local teachers allowing them to learn about the artifacts and curate their own Discovery Boxes to take back to their classrooms.

“My goal is to give these people a voice as best I can,” Keegan said. “Clearly, I bring my own understanding to the question, but the past can’t speak for itself. If I can get a couple of kids to appreciate what life was like in the islands, then it’s all worth it.”

The suitcases are carefully curated by Pateman and Keegan and have been in high demand from teachers looking for new ways of talking about a history that has long gone unstudied. Keegan and Pateman have assembled four suitcases, but have plans to increase that number.

Because of the long history of colonization and enslavement in the Bahamas, it’s often difficult to find reliable information about the Lucayans, Keegan said. Most textbooks used in Bahamian classrooms today contain information from Christopher Columbus’ reports sent back to the king and queen of Spain to tell of his travels, which were later used to justify the enslavement of the Lucayan people. Often, these reports were slanted and inaccurate, geared towards what Columbus was most interested in or what resources could be exploited, Keegan said.

“One of my arguments is if he said he saw something, then we need to pay attention but if he said he interpreted something, he didn’t know what he was looking at and was trying to make sense of it,” he said. “We don’t talk about Columbus at all in the suitcases. It’s all about native life ways.” 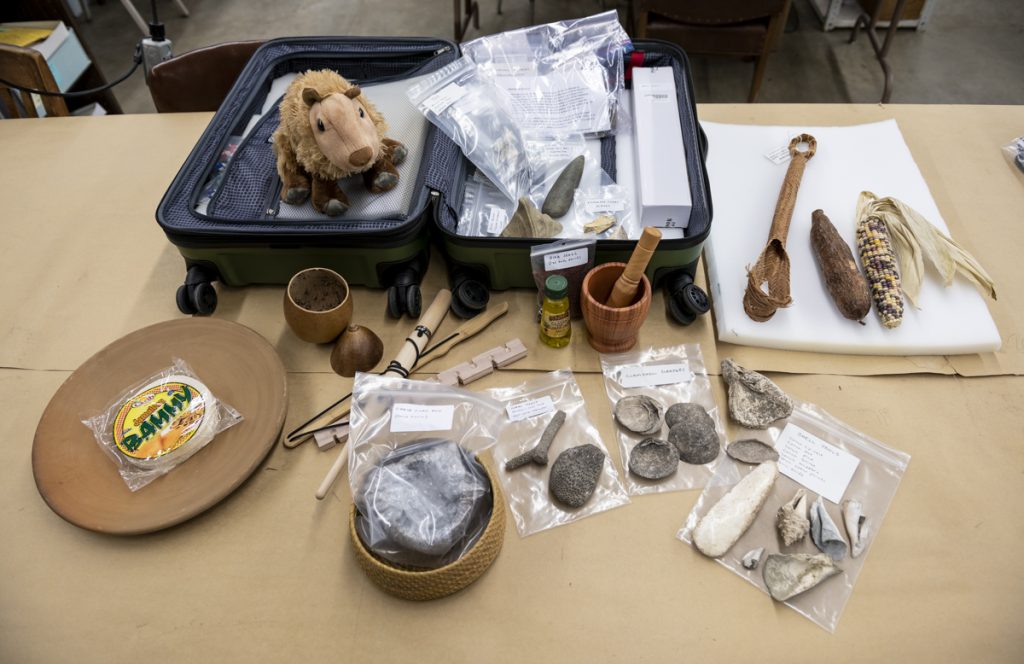 When Keegan tested the first box at the reopening of the Long Island Museum in September, he was “immediately swarmed by adults and kids,” he said. “The kids loved the hands-on objects, especially the bow drill – they all tried to start a fire.”

The suitcases contain actual artifacts, such as pieces of clay pots and beads, and modern representations of Lucayan tools and traditional items that Keegan has purchased.

Keegan’s personal favorite is a Chinese finger trap, which represents a “metape,” a woven, tube-like tool used by the Lucayans to extract cyanide from cassava plants so that they could be eaten. Like a Chinese finger trap, the woven wood could be stretched to reduce the diameter of the tube, squeezing the toxic compounds from the root vegetable.

Keegan said one of the schoolchildren’s favorite items has been a stuffed capybara, which looks exactly like a hutia, a now-extinct rodent that was native to the islands at the time of the Lucayans.

“I refuse to put anything in there that isn’t hands-on,” he said. “We’re not going to engage students unless they can touch things.”

Keegan has even added the remnants of conch shells burned in his grill to create the effect of burned pottery remnants and broken flower pots to show students how archaeologists piece together recovered pottery. 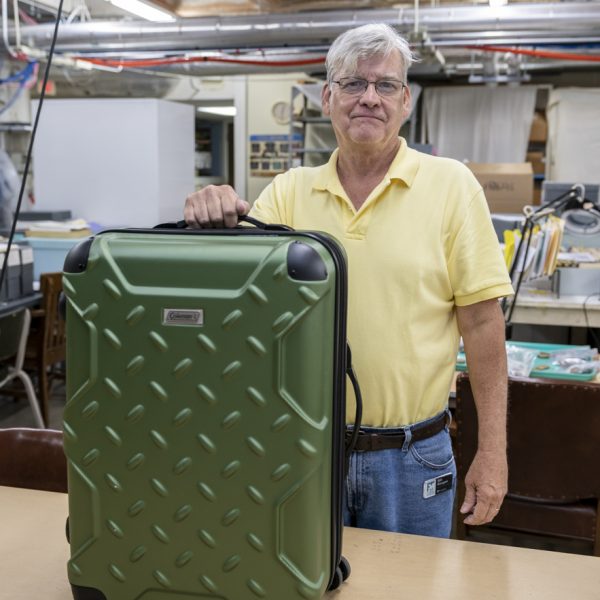 Keegan said his new mantra is asking himself, “How do I know?” and making sure he can answer specific questions from students and teachers during workshops to build long-term relationships with educators. 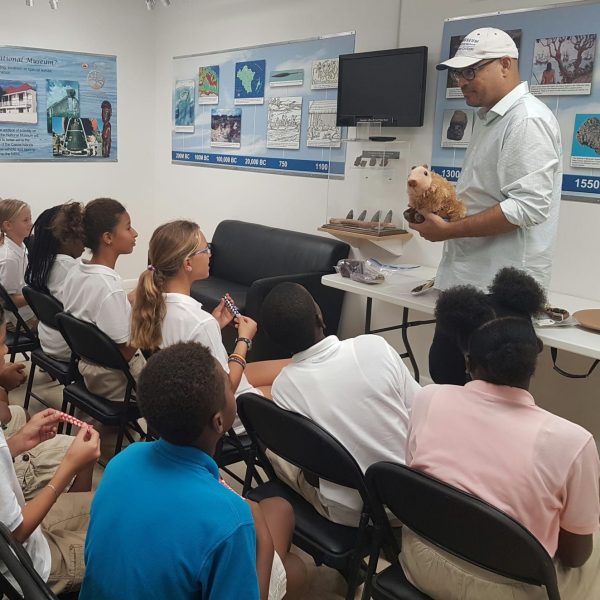 Michael Pateman unpacks a box with Bahamian schoolchildren. One of the students’ favorite items is a stuffed capybara, an animal that looks identical to the hutia. Hutias, once native rodents to the islands, are now extinct.

Keegan and Pateman’s work is timely, considering the recent reopening of the Long Island Museum after significant damage from Hurricane Joaquin in 2015. With the progress being made in Caribbean archaeology comes a movement to improve local perceptions of ancient Bahamian life.

“The current history is more of a tourist representation than something that the general public was interested in,” Keegan said. “Now, people are becoming more interested and more engaged. History is becoming a powerful tool to express yourself, especially now that there are museums popping up all over the Bahamas.”

Keegan believes that although genetic lineage does not directly connect those currently living in the Bahamas to the Lucayans, there’s something to be said for the connection to the environment that has sustained life in the islands for thousands of years. The suitcases highlight these ways of life.

“The history books treat them as this ‘other,’ with no connection to the modern world,” he said. “We have to bring in the fact that they were living, breathing human beings just like us who lived in different circumstances.”

Learn more about Caribbean Archaeology at the Florida Museum.