Deborah Matthews hunts for plume moths in darkness, waiting for the halo of her headlamp to catch a brief flicker. About the size of mosquitoes, the delicate, feathery moths fly only a few feet at a time. Matthews must watch for that short flight while keeping clear of poisonwood, cracks in the limestone and sinkholes, common hazards of fieldwork in the Bahamas.

Her vigilance, deftness with a net and more than 30 years’ experience working on plume moths and their host plants helped her discover four new species, bringing the number of known plume moth species on the islands to 23.

Plume moths are microlepidoptera, another name for tiny moths, and are understudied compared with larger, more charismatic species. But when Matthews, a biological scientist at the Florida Museum of Natural History, first joined a plume moth research project in 1987, she got hooked.

“They were just so unique,” she said. “It’s the symmetry that really gets you, the flower-like symmetry of the wing shape. When you take a closer look, you see that there are some pretty cool patterns.” 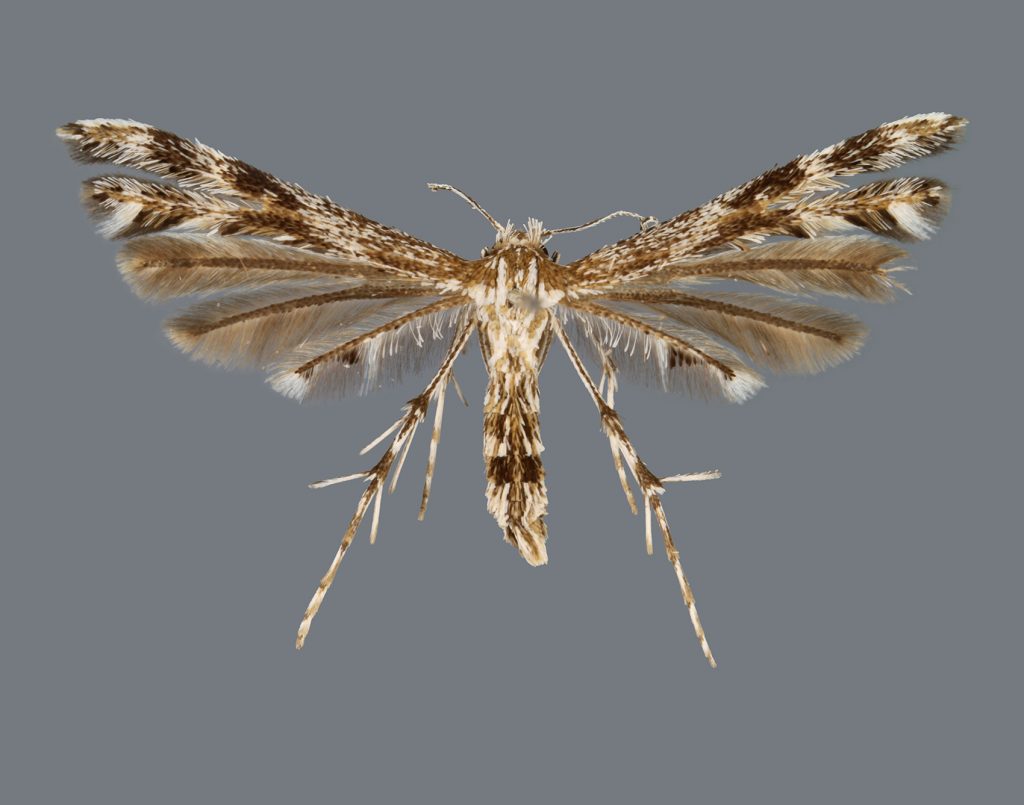 Matthews refers to Dejongia californicus, a previously discovered species of plume moth from the Bahamas, as a flagship for the group. “You just look at that and say, ‘Wow,’” she said. 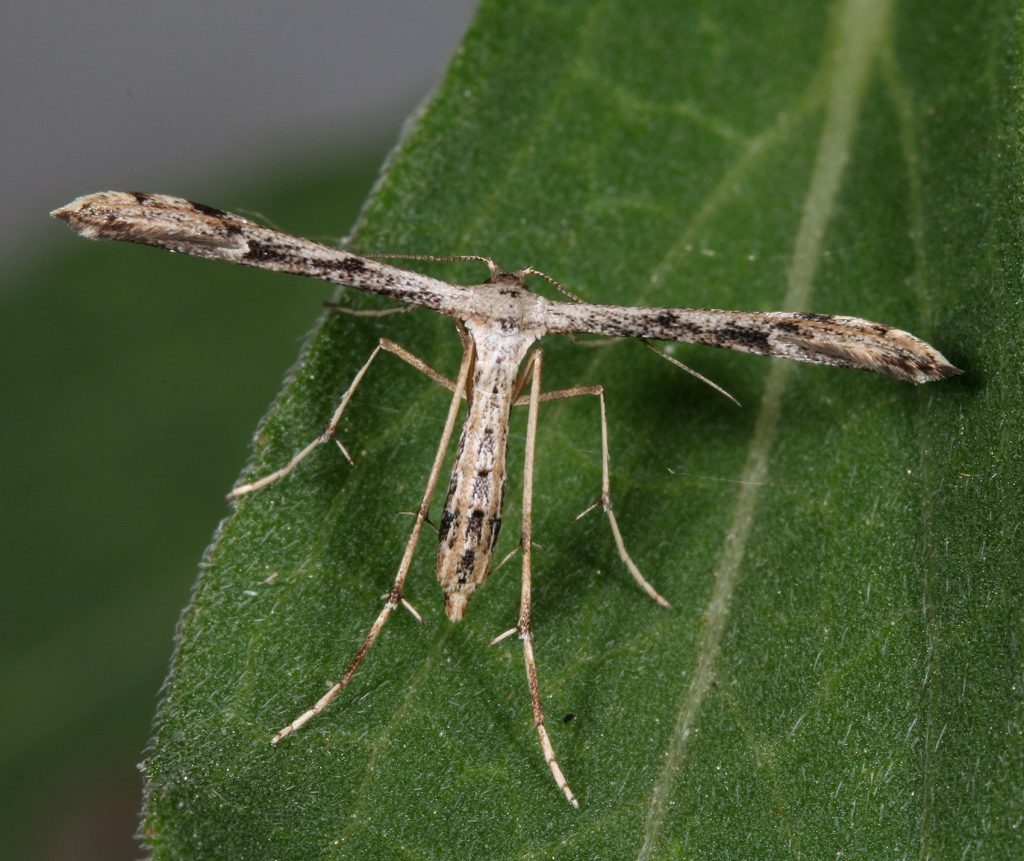 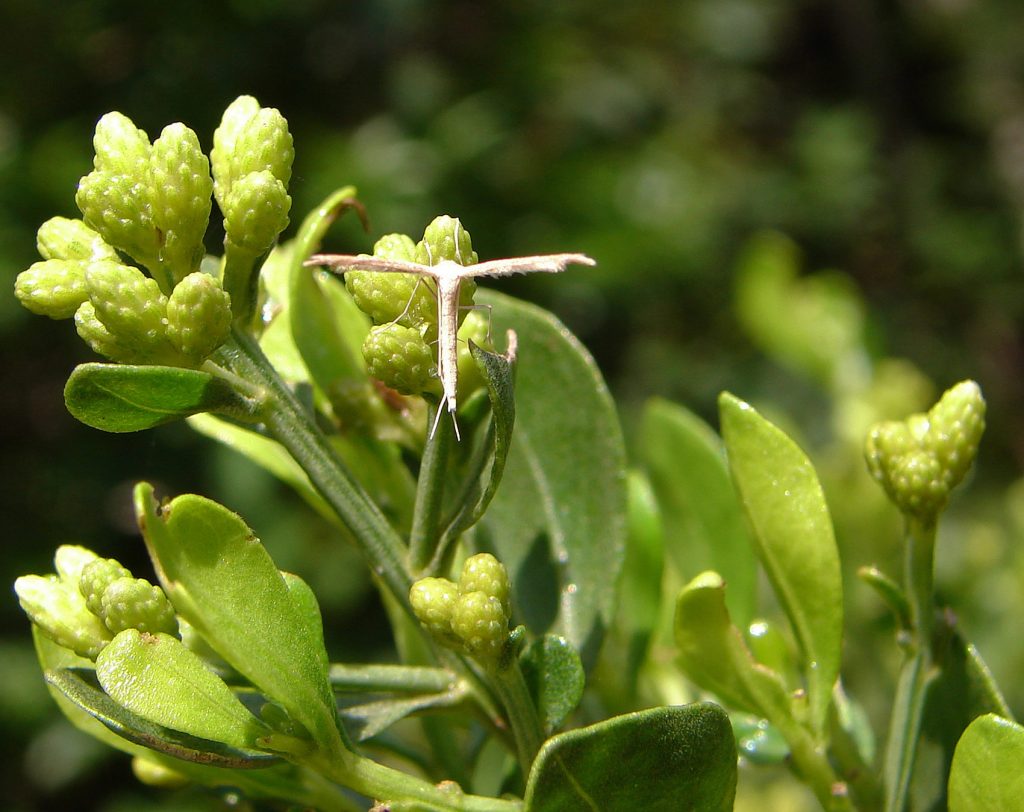 The moths are named for the unusual, fringelike scales on their wings. In their typical stance – wings held perpendicular to their body and long hindlegs extended – they resemble small stars. Found around the world, plume moths can be beneficial insects and pests. Some species serve as pollinators while others feed on plants as larvae.

The Bahamas shares 18 of its plume moth species with Florida and 10 with Cuba. While little is known about the life histories of many plume moths, they play a key role in their ecosystems, and some species have only been found on one or two islands, Matthews said.

“They’re part of the food web and part of the countless biodiversity treasures discovered in the Bahamas,” she said. “It’s important to know what you have in an area before it’s lost.”

Matthews started her Bahamian plume moth work as part of a wide-sweeping project, partially funded by the National Geographic Society, to document all of the islands’ butterfly and moth diversity. Led by Florida Museum curator Jacqueline Miller, the team sampled pinelands, dunes, mangroves, rocky coasts and even dumps across the archipelago. They began their survey in 2010 with a list of about 300 species. Now, it is nearly 1,000.

“Look how far we’ve come in that short amount of time,” Matthews said. “And we still don’t know what some of these species are.”

The four new species of plume moths are Michaelophorus salensis, named for the salt mining industry of Great Inagua, the main island where the moth was found; Oidaematophorus androsensis, named for Andros, the only island on which it has been found; Hellinsia bahamensis, named for the Bahamas; and Hellinsia lucayana, named in honor of the Lucayans, the indigenous people who once inhabited the islands. 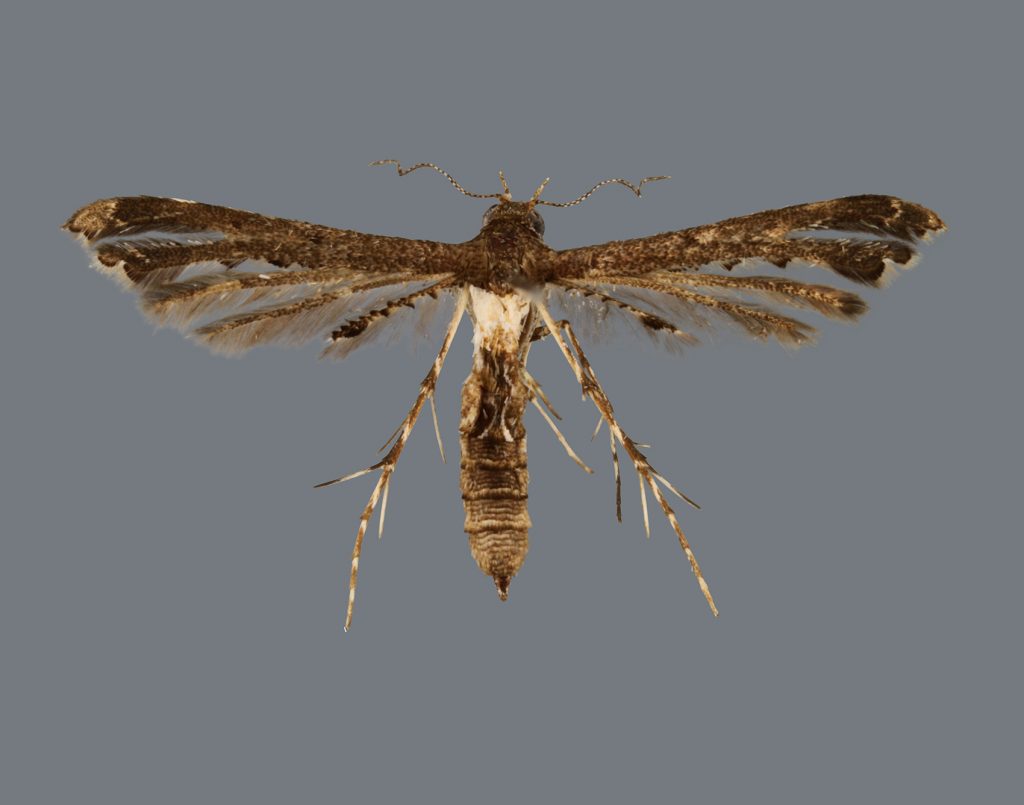 Michaelophorus salensis, one of the newly described species, closely resembles its relative M. indentatus. Matthews originally mislabeled this specimen until a dissection of its genitalia revealed it was a new species. 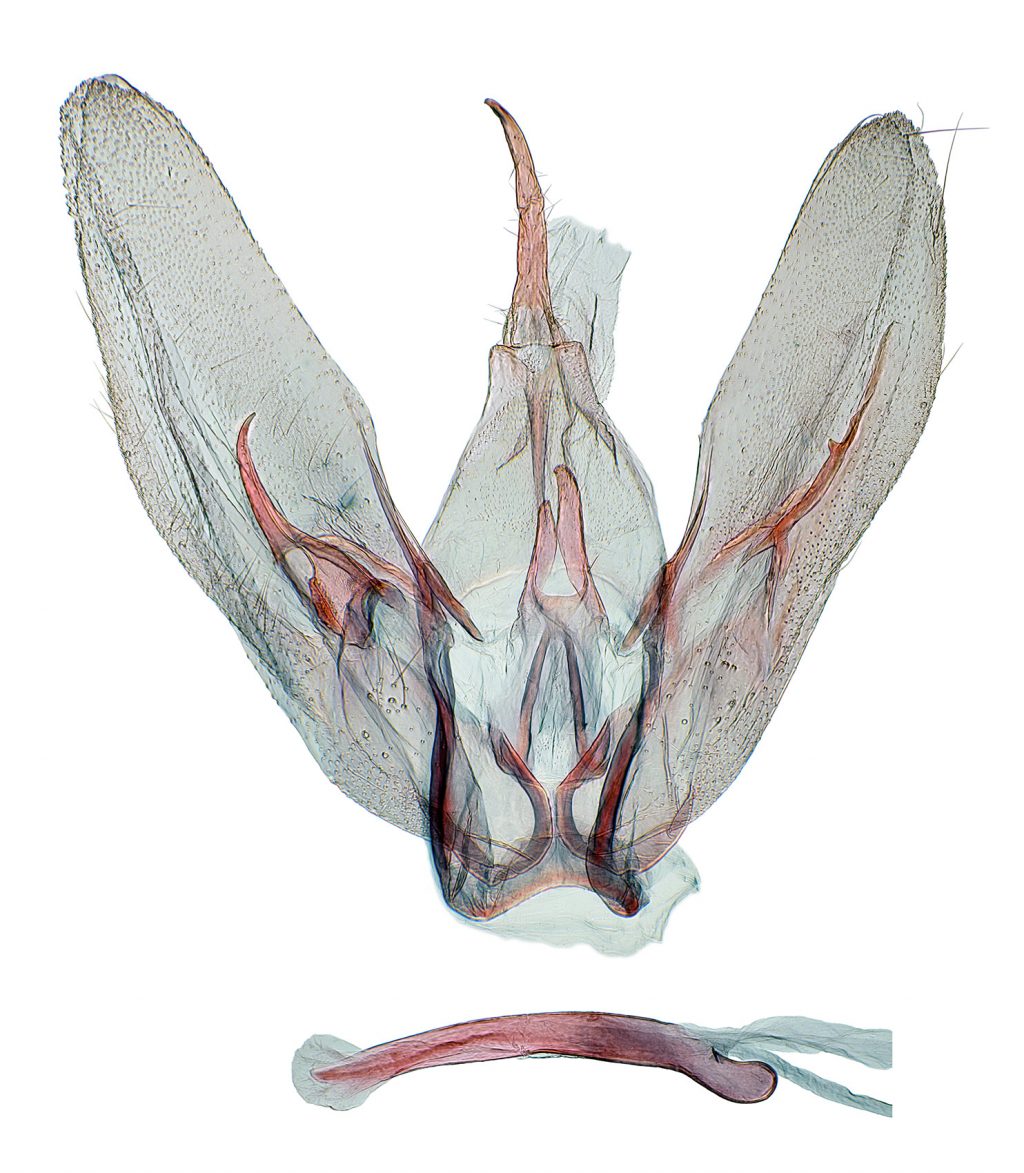 These structures are the male genitalia of Hellinsia lucayana. At top are the male moth’s claspers with which he holds the female during mating. Below is the phallus. Genitalia are useful for identifying moth species, many of which can look alike. 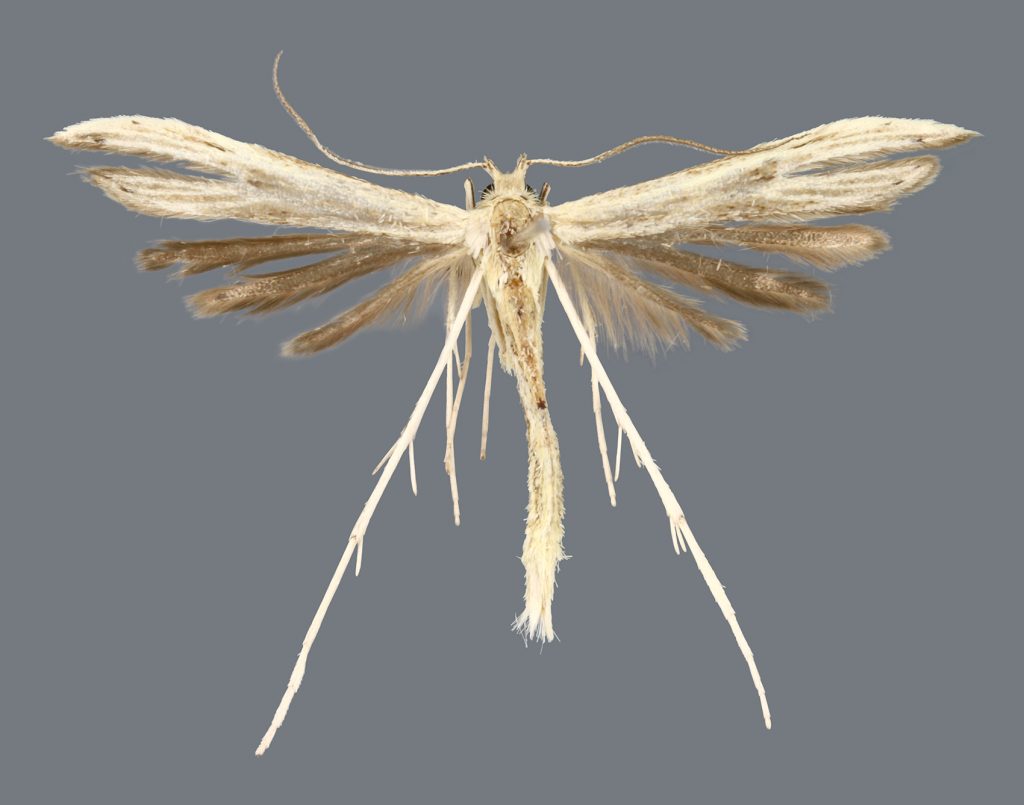 Hellinsia lucayana, named in honor of the indigenous people who once inhabited the Bahamas, is likely a flower or stem borer in its larval stage, Matthews said. The coloring of adult plume moths can often provide clues about diet, she said. Many borers are white moths as adults.

Matthews initially mistook M. salensis for its close relative Michaelophorus indentatus until she dissected its genitalia to create an illustration for her study.

“I said, ‘Oh my gosh, this is something I haven’t seen before,’” she said. “Looking at the genitalia is really important. We find so many cryptic species that way.”

The chance discovery of M. salensis is one example of why collecting and studying specimens is so crucial, Matthews said.

“You can’t just take pictures in the field and describe a new species or even identify them,” she said. “You really need specimens to do this.”

Matthews brought out two wooden boxes at the museum’s McGuire Center for Lepidoptera and Biodiversity. Inside are all of the known plume moth specimens from the Bahamas, except two that Matthews deposited in a Canadian collection and two at the Smithsonian.

“That’s it for the entire world,” Matthews said. “I have a big responsibility here. It’s pretty mind-boggling.”

The study was published in Insecta Mundi.