Brazilian free-tailed bats are expert flyers, capable of migrating hundreds of miles and regularly traveling more than 30 miles a night. But they pull up short at a narrow ocean channel that cuts across the Bahamas, dividing bat populations that last shared an ancestor hundreds of thousands of years ago.

A new study published in Ecology and Evolution uncovers a dramatic and unexpected genetic rift between populations of Tadarida brasiliensis on either side of the Northwest and Northeast Providence Channels, about 35 miles across at their most narrow point.

Genetic analysis of the populations suggests that bats from Florida colonized the northern Bahamian islands while bats from other parts of the Caribbean likely colonized the southern Bahamas. Why the bats balk at crossing a channel so narrow they can likely see land on the other side while in flight remains a mystery, said Kelly Speer, the study’s lead author who completed the research while a master’s student at the Florida Museum of Natural History. 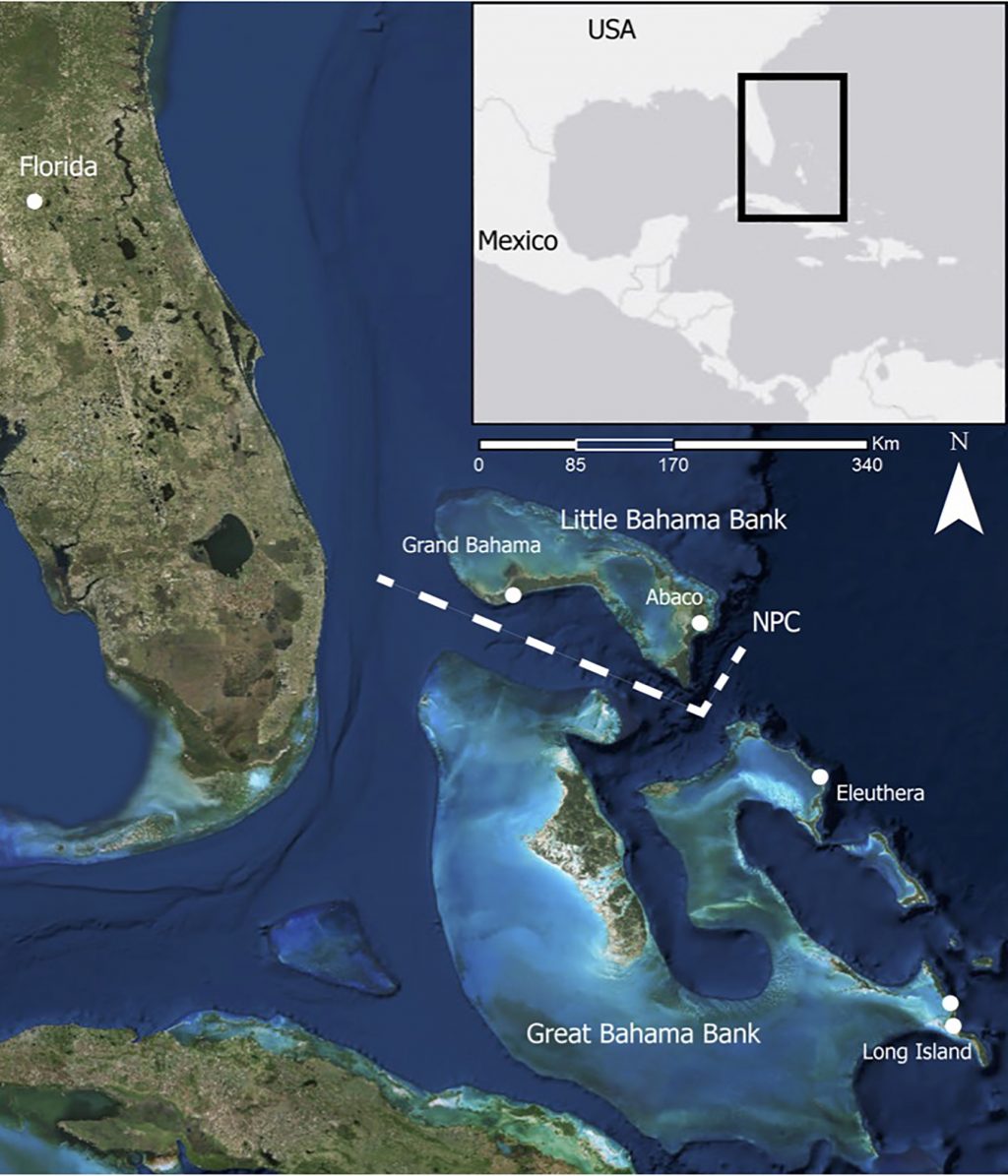 The dashed line marks the Northwest and Northeast Providence Channels, which divide populations of free-tailed bats that last shared an ancestor hundreds of thousands of years ago. Bats were collected from locations marked with white dots. 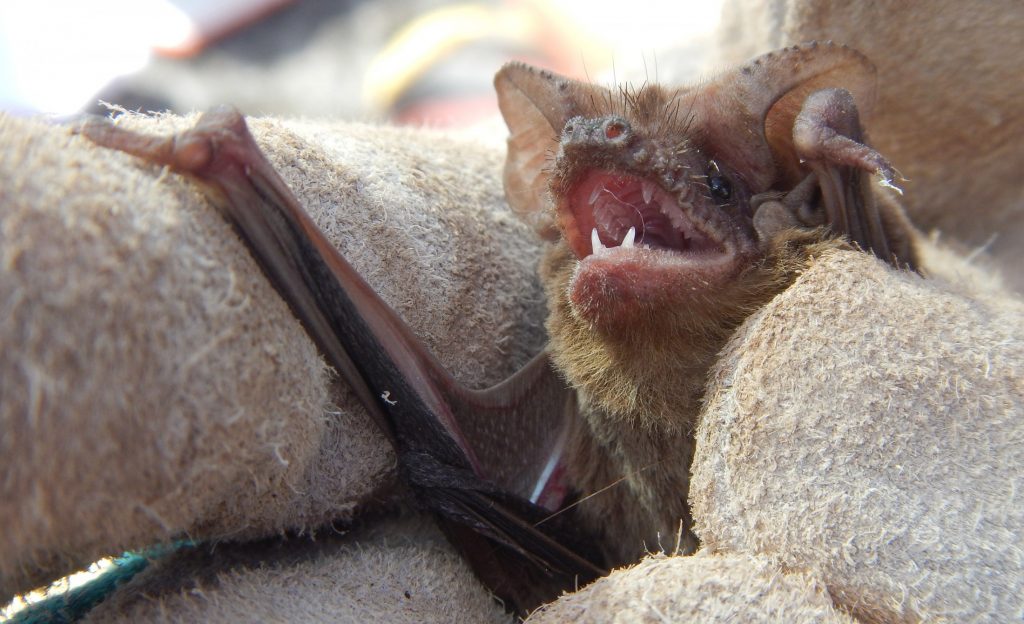 Brazilian free-tailed bats can likely see across the narrow ocean channel that divides northern and southern Bahamian islands but do not cross it. 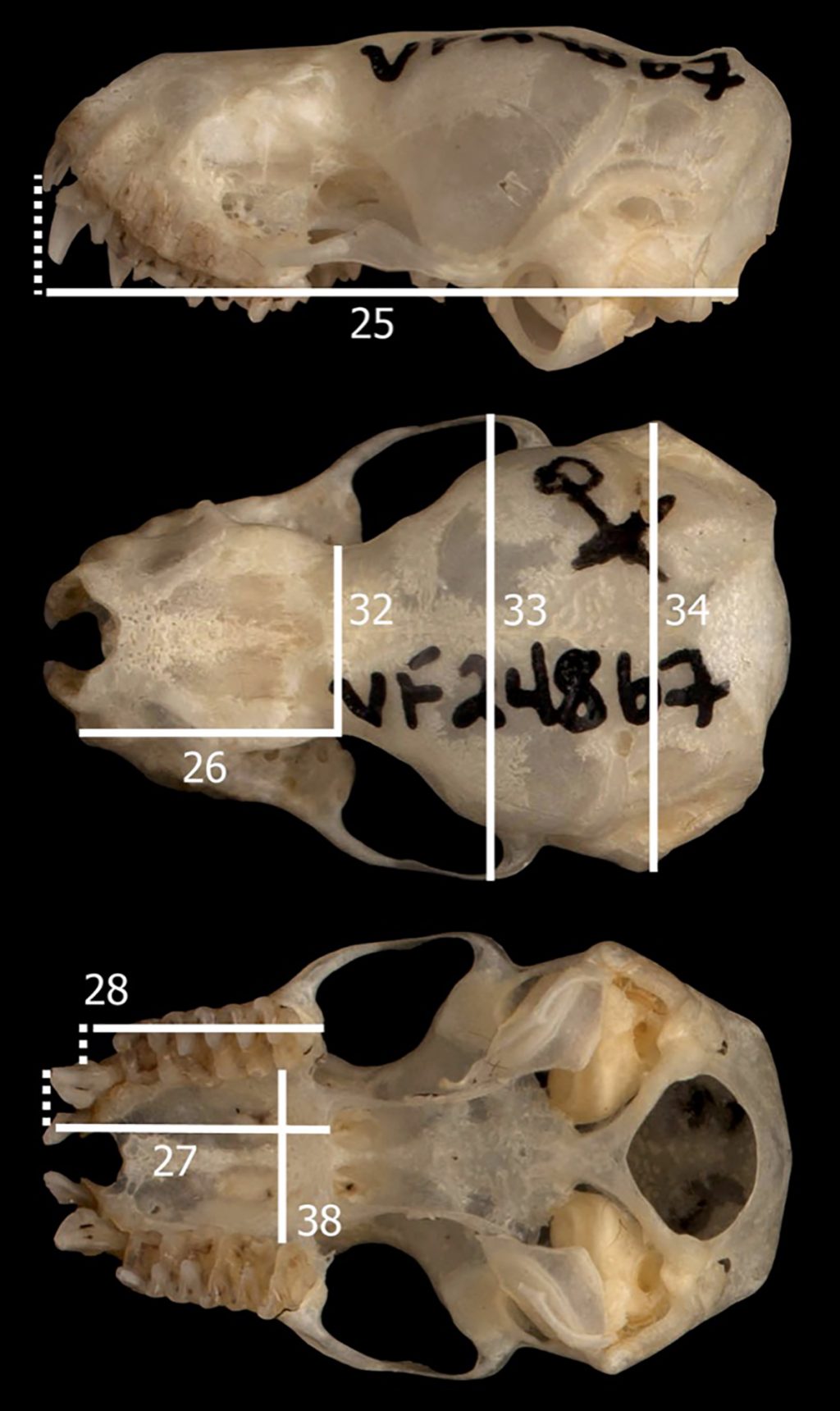 “Based on their mainland population behavior, we know they’re able to disperse much farther than the distances between islands in the Caribbean,” said Speer, now a doctoral student at the American Museum of Natural History. “It doesn’t seem like distance is the factor, and there’s no association with wind direction. We don’t have any idea why they don’t cross this channel.”

Because they can fly, bats are good models for studying mammal movement in fragmented habitats, Speer said. The ability to disperse, or spread genes by moving to other areas, plays a key role in the evolution of animal populations, and a barrier to bats’ dispersal is likely a barrier to less mobile animals.

“Many mammals undertake long migrations, but bats are unique in their ability to cross ocean channels,” she said. “You’d expect there to be no barriers to the dispersal, but that’s not the case. There are lots of barriers, many of which we wouldn’t expect.” 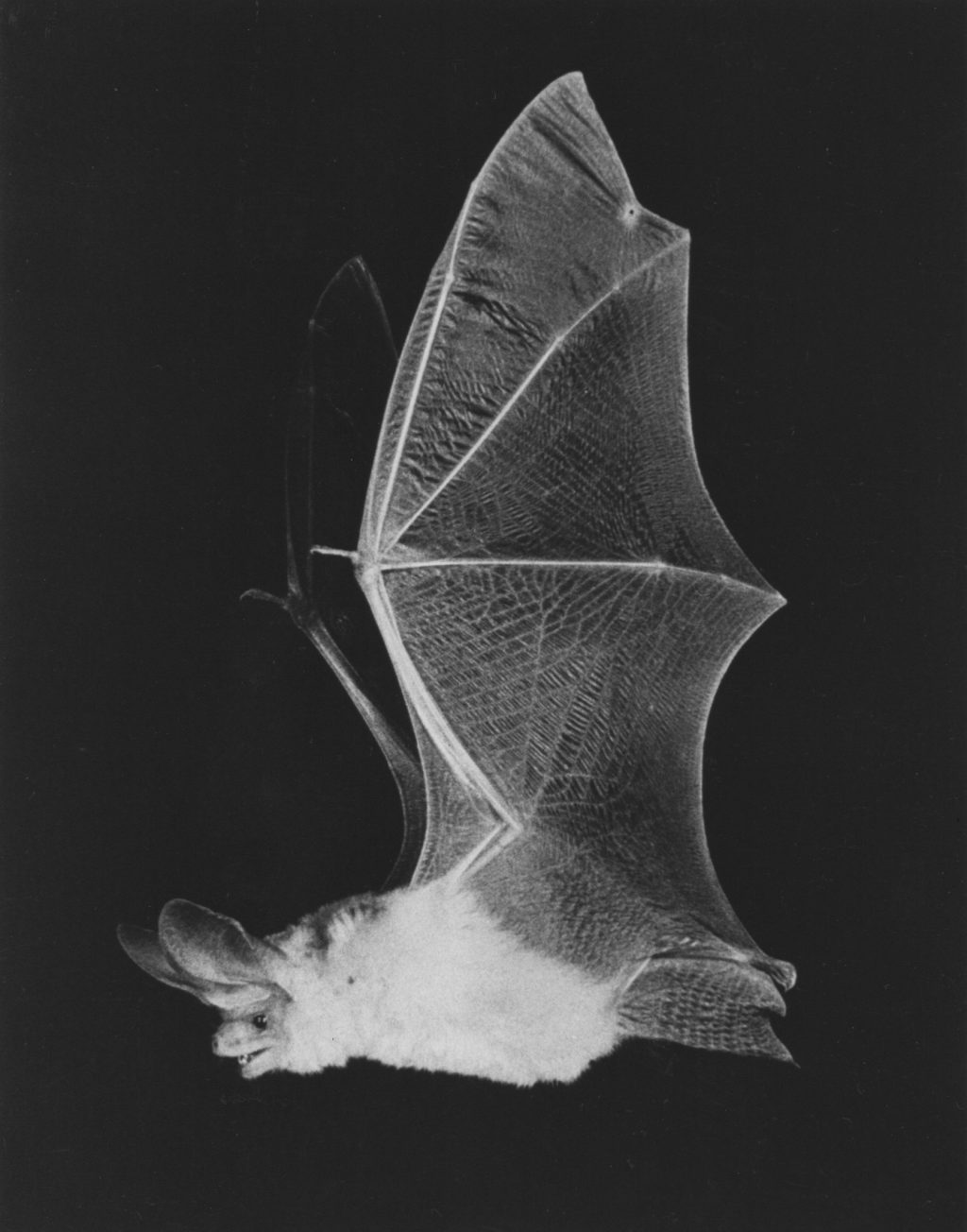 Because they are so mobile, bats are good models for studying mammal movement. 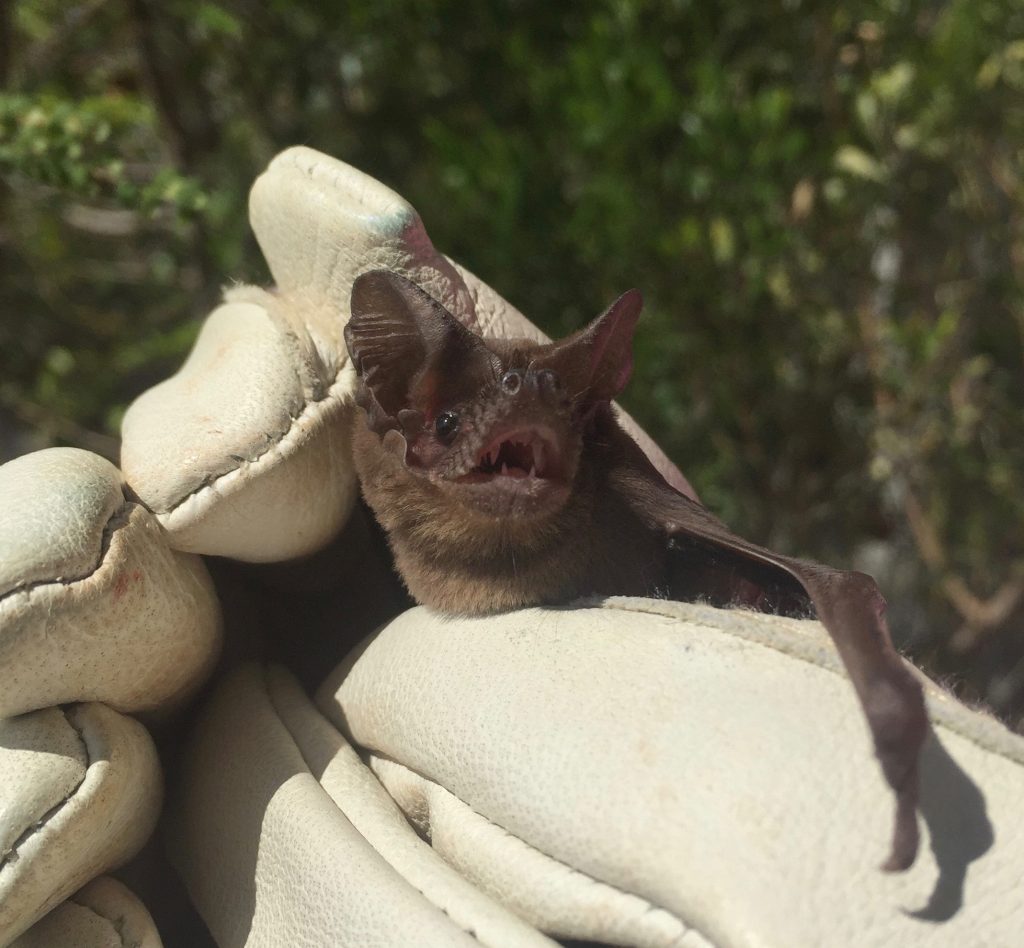 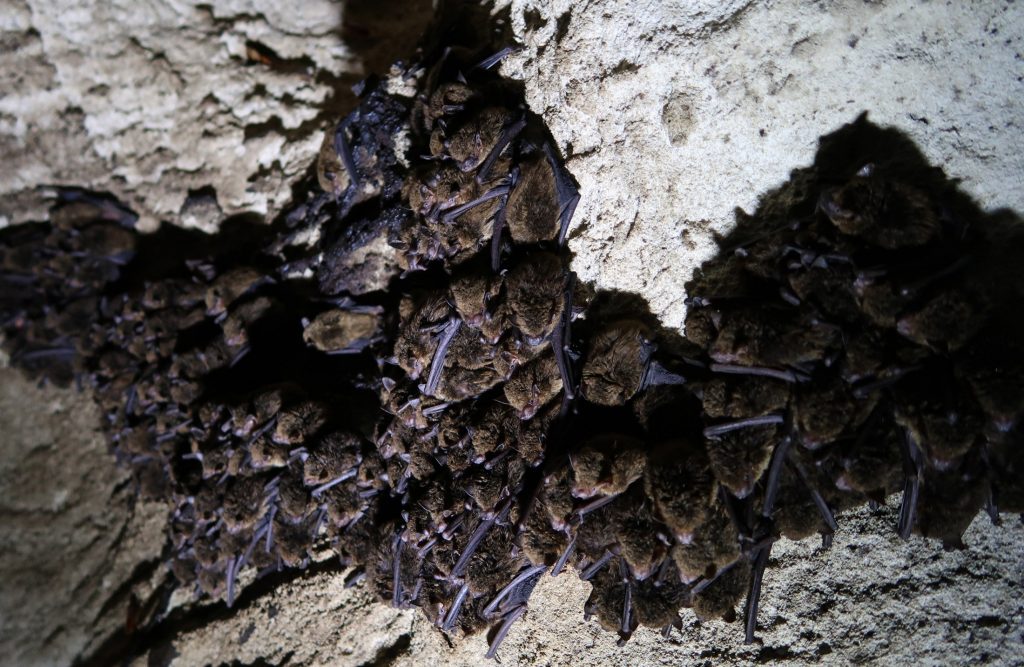 Free-tailed bats on southern islands made their homes in caves while bats on the northern islands opted for abandoned buildings. This is a Bahamian colony of Eptesicus fuscus, or big brown bats. 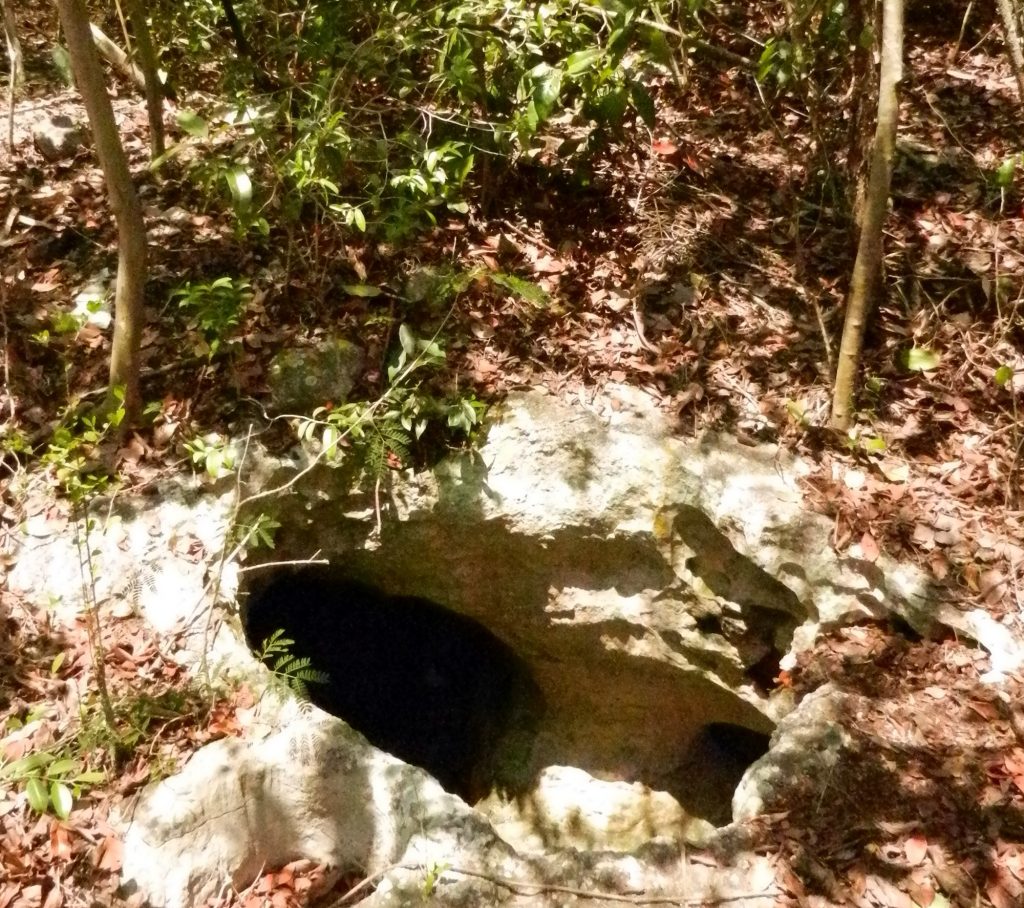 This is the entrance to one of the Bahamian caves where Kelly Speer and her colleagues collected bats.

One of the most abundant mammals in North America, Brazilian free-tailed bats — also known as Mexican free-tailed bats — inhabit a range that stretches from Argentina to Oregon. But despite being so common, the species has been understudied, said study co-author David Reed, Florida Museum curator of mammals and associate director of research and collections.

When the University of Florida Bat House’s internal structure collapsed in 2009 Reed and Speer suddenly had dozens of free-tailed bat specimens at hand and saw an opportunity to take a closer look at how the species disperses. They sampled and compared the genetics of free-tailed bats from Florida and the Bahamas, thinking the DNA would bear out their hypothesis: With long, narrow-tipped wings, well suited for swift flight in open spaces and at high altitudes, the bats would have had no trouble spreading throughout the Bahamas.

Wing shape and flight patterns had previously proven reliable predictors of bat dispersal in the Caribbean. Most earlier studies focused on a different family of bats, Phyllostomidae, or leaf-nosed bats. If Brazilian free-tailed bats are like jets, built for distance and speed, leaf-nosed bats are like helicopters. They have shorter, wider wings, better adapted for slow flight and easy maneuvering in cluttered environments. Studies showed that leaf-nosed bats are homebodies, sticking to their respective islands, presumably a result of the bats’ wing shape.

Reed and Speer expected Brazilian free-tailed bats would instead freewheel between the islands. When they sequenced a bat from one of the southern islands, however, its genetics were so different from bats on the northern islands that they thought they had tested the wrong bat. But further sampling gradually revealed a clear divide between populations on either side of the channel.

The bats are so genetically distinct from one another that the populations on the southern islands may be a different species, Speer said.

“We need to do more work to confirm that, but we think the population on the southern islands might belong to a broader Caribbean species of free-tailed bat that has never been described,” she said. “The nice thing about science is that when you make a hypothesis and your data tell you it’s wrong, you still find something we didn’t know before.”

Read the full study in Ecology and Evolution.

Learn more about Mammals Collection and the Reed Lab at the Florida Museum.